Time for the final recap of the 10,000LB Hamburger Tour; the second serving, if you will. For those just catching on, this lasted all throughout July, traveling across North America on a tour bus with Treasure Fingers and Theophilus London. We did an extensive run across enormous Canada. Normally I have a rule: no more than four shows in a row. I'm not sure how but that rule got broken, or bent, and we did a five city blitz. The day before that started, I was in Vancouver and decided to get a massage at my hotel to try and ease the tour wear-and-tear. Then we went to our first Canadian show in Victoria, which involved putting the bus on a ferry. There's something pretty phenomenal about putting an entire bus on a boat. But hey, Archimedes wasn't kidding, buoyancy is very real. We also saw some porpoises in the water as we were leaving the docks. How do you recognize a porpoise? By its fin! In Victoria, about an hour or two before my set my neck started stiffening up. It got bad really fast and I had to play my set whilst in pain. Damn massage! On the lighter side, a girl asked me if I was Amish.


The next day we put the bus back on the ferry and headed back to Vancouver for our show there. My neck was a bit less achy but those things don't just go away in a day. I went to a schvitz and it helped a little. We had dinner at this sushi restaurant and the waitress told us that the day before she served Eagles Of Death Metal and Josh Homme invited her to their concert. Classy! My show was at a place aptly called Venue, which is the old Plaza where I've played before. Great big stage, one of the bigger venues on the tour and it was rammed. There was also an international fireworks competition going on that evening so everyone was out in the streets. My horse Mustard is quite popular in Vancouver and some guy tried to mount him (sexually) towards the end of the show. Security pushed him off but he almost knocked over my lightbox. I saw him in the street after the gig, he apologized and blamed it on "too much MDMA." Way to go buddy. People were inviting us to afterparties but we had to leave town at 3:30am to drive through the night across the Rockies.

I woke up on the bus around noon in my dark bunk and immediately thought "I hope I didn't miss the Rockies!" I went to the front and saw the most breathtaking landscapes of the whole tour. Everyone else was asleep so I took a ton of pictures to show off. It's amazing how abruptly the mountains end, too. It just stops suddenly. We went to Calgary and I had been trying to schedule a visit to this semi-private synth museum that Chromeo visited a few weeks prior but they were hosting a function that day and it was unsure if they could sneak us in. We went to dinner, the obligatory steak, a must if you visit Calgary. And then I got a call inviting us to the synth spot just an hour before Treasure Fingers' set. This place was unbelievable, I don't understand how come I never heard about it until now. It's not just synths, they have old organs, early drum machines, the first tape samplers... Just watch:

The show was crammed and sweaty, in the best way possible. We played Hi Fi Club which is owned by our friends Smalltown DJs and my light show could barely fit in that small stage. It was like if you brought a UFO inside your living room. I like that concept.

Then we went to Edmonton, where my Fool's Gold buddies LA Riots and Congorock were also in town to play another show with LMFAO. I met them for dinner at a Benihana-esque spot and I brought Grateful Bear. I went to check out their show, it was built around some Nascar thing that was going on. Ricky! Bobby! Then I went to our gig, honestly not assuming that much because the promoter was a bit nervous in the weeks prior. It turned out to be one of the best shows of the tour! Seriously, top three. You know sometimes you start a set and it feels like the crowd is just.... ebullient? That's how it was.

Edmonton was the last city where we had our tour bus. We said our goodbyes to Art the driver, emptied out that bad boy (found a game of Monopoly that we bought at the beginning of tour and forgot about), and headed to the airport at 5am for a flight to Toronto, city number five in five days. This wasn't a Hamburger show however, it was Time festival. The city of Toronto had been on strike for weeks. There were garbage bags piling up and this parking garage was flooded from rain, probably because the sewers were blocked up. I heard they finally got things back on track recently. The festival also had my extended fam DJ Mehdi and Flosstradamus on the bill. We all played in the main room and hung out during each other's sets while the laser lights zapped the room into oblivion. I remember sweating profusely that night. 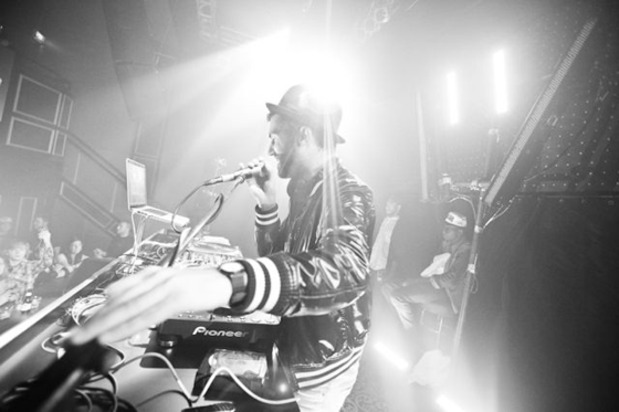 After that intense run I had three days off so I went to Montreal to see my family. I appeared on a Quebecois talkshow, "Bons Baisers de France," apparently the most watched evening talkshow there. My stiff neck came back so I went to do some acupuncture. And more than anything, I ate my mom's food. Lots of it.

For the final weekend of the tour we hopped in a 15 seater van and drove to Ottawa first. I did a toy signing there for the Kidrobot bear and we played a brand new club that still smelled like paint and sawdust at soundcheck. Then came the long-awaited New York show. The city was plastered in posters: A-TRAK - TREASURE FINGERS - THEOPHILUS LONDON - JACK BEATS. At 10pm there was already a line down the block. It's funny, it almost didn't feel like New York for me because I was still on tour, suitcases packed, only there for a few hours. But seeing my friends at the show definitely reminded me where I was. I just wish my brother was in town. Craze was even there, hanging out with us all night. Webster Hall was a great fit for the light show. I had been telling my friends about the lights for weeks and they all finally got to see them. Theophilus played his best set of the tour and even had an African percussionist with him. It was good to be back on the east coast where the curfews are late and we can put on another DJ after me when I'm done. I kept kicking people out of the dressing room that night too, it was funny.

Another long drive: we headed up to Montreal for the OG hometown show. For this date we invited Peanut Butter Wolf to come and do his video show. He pulled out some old Robotnick videos that were ill, and he even did a booty set. As I started my set, literally one minute into my intro the mixer blew. Crap poop hell damn fart... what do I do? I had to swap it, no choice but to cut the sound off. I had been traveling with a spare mixer in the bus/van for the whole tour after a month of smooth sailing, on the second-to-last show it finally came in handy. After that false start we got back in motion and rocked out till the end. I remember playing Retro Grade "Moda" at the end of my set and tweeting about how it's one of the great masterpieces of the year. Montreal was the last show of the tour with openers. There was only one city left, Quebec, where I hadn't played in forever. We stayed at the historic Chateau Frontenac hotel and there was a fire scare, but thankfully nothing happened.

I finally headed home, but only for a few days because I still had some festival gigs the following weekend before I could really hang the ol' towel. First was Lollapalooza and all the Chicago traffic that comes with it. The dance stage was a great success, I think, despite the rain. I played a set that was quite different from my club sets on the tour, and there were some nice write-ups on Pitchfork and the Chicago Sun-Times. I didn't even get to see any of the other acts, they had me running all day, even going to an official autograph booth. Later that night we did a Fool's Gold x imeem afterparty with Treasure Fingers and Nick Catchdubs. At 5am I had to go back to the airport to fly to LA for Hard festival. You probably heard about what happened there, the cops shut it down early, in fact right as my brother was about to hit the stage. Finally, the next day I did an unannounced afternoon set at the Do Over, LA's best kept secret. It was out on a courtyard, playing some party classics to a sangria-sipping crowd of rumpshakers. You can listen to my set on their blog. To cap off the trip, we went to Benihana (the real one) for P-Thugg's birthday and I fell asleep at 11pm.

I'm done! I'm super happy with the outcome of this tour. A big part of the mission, for me, was to bring DJing into new places. To headline a tour as a DJ, to go into live venues and do the band circuit, get a tour bus and stage production. To get opening acts—and I gotta give a big shout out to Treasure Fingers and Theophilus for rocking with me the whole month. It's been a really fulfilling experience. More than anything, I should thank everyone that came to the shows! It all starts and ends with the fans, so thank you. Let's continue to push things forward and to do the unexpected.