It's also worth noting that this blend is not something that exists only in the minds and bedrooms of DJs but represents the machete end of a tendency that is actually cutting through three dimensional clubs and street dances from Toronto to Buenos Aires. Case in point: the Que Bajo tour, rough dates for which are listed below.

September 17, the second date on the list, is a little event at Santos Party House here in NYC called GHETTO PALMS. It also happens to be the release bashy for the new Buzzrock Warrior LP from Ghetto Palms fav Jahdan Blakkamoore, who’ll be performing live. You can take the following blend as a teaser of what to expect from Geko, Andy, DJ Rekha and myself for the rest of the night, except with more bhangra and dancehall on top. (Geko and Andy’s notes on the tracks are below). 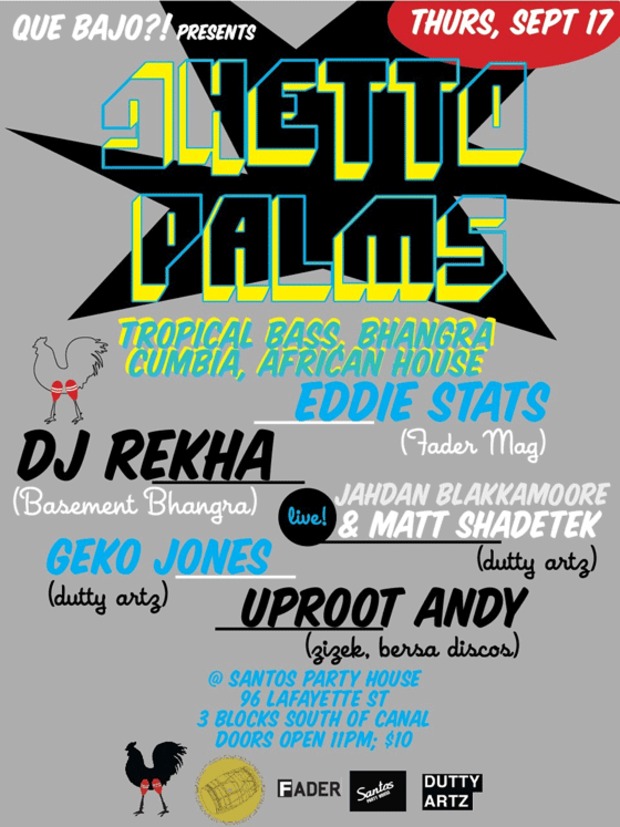 This is a Que Bajo mix. It marks the first time we (Uproot Andy and Geko Jones) are touring together, taking the sound that we've been building at the Que Bajo parties in New York and bringing it to cities across the country.

“Manuelita” - The first track is a remix we've just made of a traditional style Colombian bullerengue song. Doing these kinds of remixes blending folkloric music with club music is one of the sounds that has come define our party and this kind of remix has itself really become traditional for us over the last year or so.

“Puchi Puchi Lockoff” (Uproot Andy Mash Up) – This is a mash up of the Chimpo dubstep tune “Lockoff” with a vocal from El 5to Elemento. There's also a pretty typical Mexican Tribal Guarachero sample in there among other added percussion.

“Cuka” - Batida are based in Lisbon and making really dope kuduro that samples more traditional kinds of Angolan music like Semba. You can see why we like this.

“Bruja” - Geko was introduced to DJ Buxxi on a trip to Colombia in April. We've been keeping an eye on him and he's a really prolific producer, shouldering basically the whole island province of San Andres with insane dancehall meets chutney meets hip-hop meets zouk riddims.

“Gun Town” - Its the day after labor day and coming off the parkway we felt we wanted to have a Soca tune in here and even though this Maximus Dan tune on the Cello Riddim is at least a year old we really like how the rhythm in the hi-hats mirrors the scraper and maraca rhythms in most of the songs that appear on this mix. Also we really like the way he fits the melody from The Kinks' “All Day and All of the Night” onto the riddim.

“Hold the Line” remix - This Frikstailers remix is in the Cumbia Villera style, that is the Argentinian street shit, but they do it really well, and bring in other influences like that dubstep wobble. Athough Frikstailers are from Argentina their style of cumbia is more international and you'll almost always catch something of theirs in our DJ sets.

“Eres una Niña” - Flex has another, more controversial name. But we just like his version of Revolution Riddim, especially because it is essentially a cover of Barrington Levy's “Here I Come” performed in Spanish. You might say this is traditional reggaeton, which is just another way of saying Dancehall.

Here's our tour schedule as of now:

An updated schedule can be found here.