At the top of an old building near downtown, there were occasional Pop Montreal hosted panels. Because I missed Grimes due to hanging out with all of Canada at the Arcade Fire show, I made a point to see her discussion with Tim Hecker, a dude who makes some of the most beautifully bummed out experimental music around. It was a bizarre talk—these two artists intersect only at a base level. Both have warped takes on traditional music, and generally, to paraphrase Hecker, "bang their heads against the wall" until they get what they want. It's music that comes from the utter destruction of what came before. On that level, it was a great talk, but I couldn't help but think about how much more fun/depressing/awesome it would have been had the two actually collaborated on a live performance. 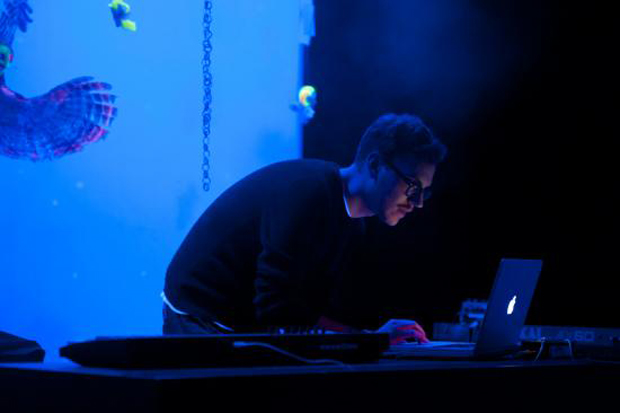 Photo of CFCF by LP Maurice for Pop Montreal

Later, I went to a bizarre venue that had fake animals hanging from strings and a vaguely nautical theme that was a lot like Wave Race 64. It was a calm place, perfect for CFCF’s set, which featured his skewed take on new age music, which is actually pretty similar to most new age music (pan pipes! calming washes of synths that sound like waves!), but done tastefully. A lot of artists right now seem in such a hurry to consume all music right away, and forget to actually absorb what they're listening to so that their take can bring something new to their subgenre. New age music is a particularly difficult to make well. CFCF seems to have taken the time to figure out what he can bring to the genre, and when the calming aspects slowly shift toward the ominous, it doesn't feel out of place.

D'eon also falls into the genre synthesist category (there is a theme here and the theme is that everyone I've talked about thus far is Canadian), his set was basically built on stuttering drums, warped keys and his vocals, which sit somewhere between nasal and new jack swing. It's a weird take on music, but it also sounds genuine, like he's just taken in all these weird influences and is trying to fit them all together in his music because they don't fit together in real life.

Sleep∞Over, meanwhile, is less about pulling from disparate places and more about piling things on top of each other. Her album, Forever, is not the first thing she's ever released, but it's the most focused and clear. That's saying something, considering her whole thing is basically making music that exists in an alternate world where Kate Bush's Hounds of Love is the most influential album ever, and from there everyone just worked on making more screwed up, screwed down and drugged out versions of it. Seeing it live is completely hypnotic, although I'm sure that was also partially due to the fact that every mixed drink in Montreal is 99% sugary mixer and 1% actual alcohol (sorry Montreal). 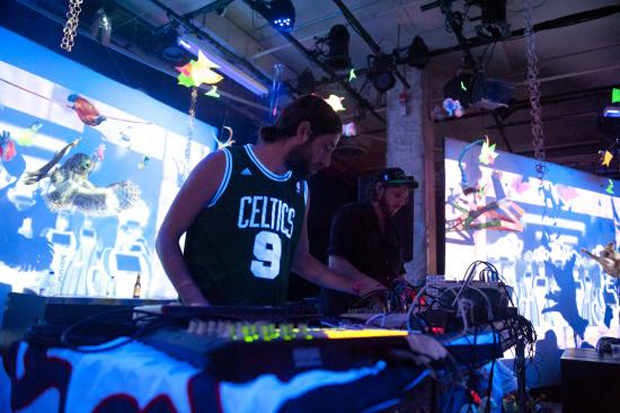 Photo of Ford and Lopatin by LP Maurice for Pop Montreal

The big secret about Ford and Lopatin is that their live set is almost nothing like their recent record, Channel Pressure. While that album is fun to listen to, they really shine when they're mutating those tracks into a continuous bass-heavy set that feels (and looks) extremely involved. This is maybe not what people come to their shows expecting, which is maybe a problem? At the same time, though, it's an entirely new take on their own music, like a secret, hidden second Ford and Lopatin album that you can never own or hear more than once. 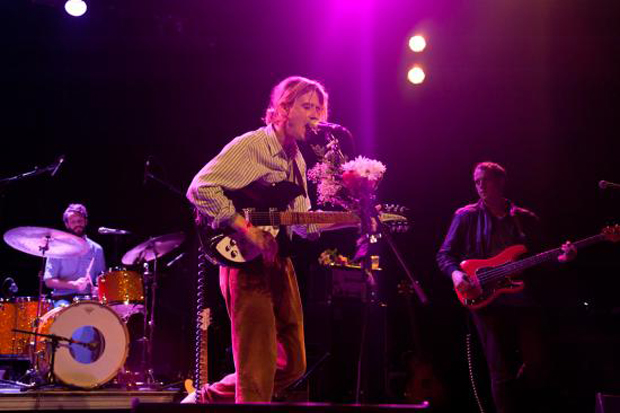 Photo of Girls by LP Maurice for Pop Montreal

Let's talk about Girls for a minute. Girls! They are such a rock band in a way that a lot of bands just aren't right now. With the exception of Arcade Fire, my time at the festival was dominated by bands that use laptops and keyboards more than they use guitars (if they use guitars at all), so it was refreshing to see a band take on all the familiar rock performance tropes. Girls tie flowers to their mic stands, Chris Owens hops around and can't keep his hair out of his face and no one—on stage or in the audience—is over it. In 2011, every Girls show is like the best rock show that's ever happened. Seeing them attack heavier-than-normal songs like "Vomit" and "Morning Light" is revelatory. These tracks are maybe not the reason that people love Girls, but they're why I care about Girls. It's rare that a band can go from heartworn and tender to over-the-top and angry. They're popular, sure, but also distinctly flawed and human. It's a skill and trait that is overlooked, but extremely important.

This year was Pop Montreal's 10th Anniversary. Appropriately, it felt huger and more dedicated to bigger bands, which isn't a bad thing. This festival is a great model for pretty much any other festival anywhere in the world. It's laid back, and although there are still moments of heavily conflicting schedules (Nguzunguzu up against Sleep∞Over? Come onnnnnnn dudes!), I still left feeling like I had a grasp on what's going on in music right now—hugely popular or totally niche—and that is absolutely worthwhile.