Far Rockaway, Queens MC Stack Bundles has a song called, “Temper, Temper” in which he says of the state of New York hip-hop, “The only movements moving are the Unit and the Dips.” Welcome to New York City.

There aren’t exactly tumbleweeds blowing down Broadway, but there are some issues. There are many reasons why G-Unit and the Diplomats are successful (even if they’re successful on very different levels)—the purple, the vocab, the superthug-as-superhero mythology—but they’ve both cut the cord and sonically and stylistically left home, shrugging off (for better or for worse) the city’s rich rap history, and pulling that most New York of moves: starting from scratch.

Which leaves New York, as a scene, in the shadows. This time around there’s no major beef. No coastal friction. The average rap fans—which at this point is the same as saying the “average pop fans”—in New York and everywhere else don’t care that much about 50 and Fat Joe, or whether Jim Jones rolls with Game or not. People rock Young Jeezy’s Snowman T-shirt on 125th Street in Harlem. They want to hear the best songs no matter where they come from.

So what happens to young New York rappers, those who are caught in the no man’s land between what sells and what they grew up thinking real hip-hop sounded like? Some are trying to take back hip-hop’s hearts and minds with a defiantly traditional New York sound and vision that’s sprayed across a seemingly endless stream of mixtapes, demanding that people come to them. And some have realized that the only route to success is one of compromise. 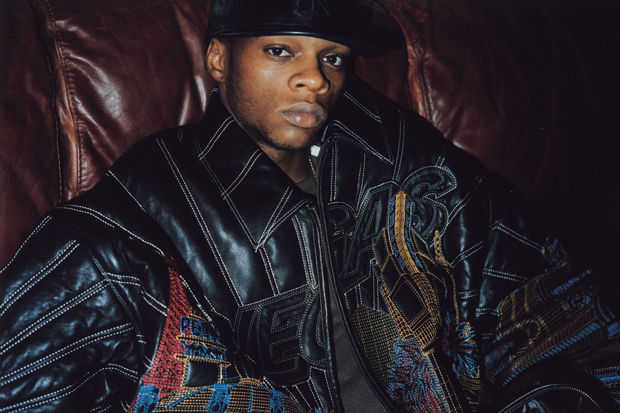 The instrumental for Young Jeezy’s “Go Crazy”, is playing at small-animal-deafening levels on infinite repeat, with the horns billowing through the halls of a Lower East Side studio called The Cutting Room. DJ Kay Slay, the iconic Hot 97 radio personality, mixtape DJ and “Drama King” is talking to someone about the $700 pair of pants he just bought and saying how for that much paper, “The pants better get up and walk themselves to the fucking cleaners.” Playing the wall in the studio, Brooklyn MC Papoose has a flat-brimmed fitted cocked over one eye and he’s nodding to Don Cannon’s beat, his lips moving slightly, making out bars-to-be.

Over the next hour or so, he’ll lay down a chorus over the beat, shouting, “Shoot em up,” over and over. He’ll drop a series of buzz saw bars about knocking dudes over onto the ass of their Evisu jeans. He and his manager will even hop in the booth together to adlib assorted Oh!s and What!s.

In some way Papoose is a quick-draw expert in the day of biological warfare; someone who’s talent doesn’t quite jibe with the reality of today’s market. He posits himself as a “lyrical assassin,” and there are probably dozens of crushed egos in New York that belong to those on the losing end of battles with Pap. Beyond the battles and mixtapes, Papoose is signed with Kay Slay’s Streetsweepers Entertainment, and he plans to release his debut album Nacirema’s Dream (that’s “American” spelled backwards) independently.

Pap’s blank demeanor hides the beast he lets out in the booth. With a nasal pitched voice—not unlike that of the late Big L—and lyrics laced with 10-cent words, he relentlessly deals out ferocious boasts and threats like a middleweight throwing stinging jabs. “I am the streets/ Look both ways before you cross me.” That’s the kind of couplet that gets the denizens of hip-hop message boards and other rhyme aficionados hot and bothered. And those kinds of lines litter Pap’s catalog. But they don’t say much about him, and as Jay-Z has mentioned in the past, one hot line does not make a hot song. Lyrics of fury on another dude’s beat can give listeners a cheap thrill, something that gets heavy iPod rotation. But mixtape cuts rarely make the impact, or are crafted with the care, of a song destined for an album. Pap acknowledges the limitations of 16-bar freestyles and $5 mixtapes as well as the consequences of being known as a mixtape artist, but defiantly suggests that he’s not a one-trick MC. “I can put out numerous mixtapes and my album is still gonna be incredible,” he says. “Some guys lack talent and they air themselves out on a mixtape. When it comes to do their album they can’t deliver.” Kay Slay, talking about the one-dimensional quality of mixtape rappers, puts it more succinctly, “You can’t kill the block but so many times. You kill the block on four records…everybody’s dead now. Put the gun down. Take ’em to the hospital.” 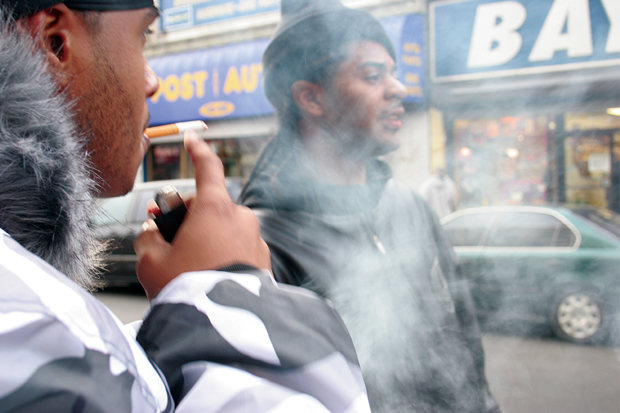 Stack Bundles is another mixtape artist who’s trying to translate his prodigious skill at murdering other people’s songs (and murdering people in songs) into something resembling a music career. Bundles is a perfect example of how mixtapes can provide musical kicks that simply aren’t possible on a commercially released album. There are no budget constraints, no samples to clear—on a mixtape your choice of producers is only limited by your imagination. In 2003, over some of Jay-Z’s hardest Black Album beats—“PSA” and “99 Problems”—a barely drinking-age Bundles used DJ Clue’s mixtapes like When Animals Attack to give Hov a run for his money. Bundles rhymed over the Just Blaze and Rick Rubin-produced tracks like he paid for them. Whether it was coke speak (“I was guilty for starting the drought/ I held the water like the Hoover Dam”) or fashion trend analysis (“It’s far from summer/ And Jay’s got these dickheads running around in colorful button-downs/ Fuckin clowns”), his was a triumph of formalism. Everybody was saying that shit—he just said it better.

Bundles is one of the mixtape circuit’s true wolves, hopping on every hot beat as soon as he can, blowing holes in other people’s tracks. But listening to his flammable verses doesn’t begin to suggest who the enigmatic man behind the music really is. Bundles is a burly, excitable dude who has a magnetic force about him. He can be gruff, talking about his hood rep one second, and then sensitively sharing his feelings about Lupe Fiasco and Joe Budden (two MCs he adores) the next. He’s earnest, funny and emotional. But for the most part, on mixtapes, he plays the part of the superthug. Bundles, who is affiliated with DJ Clue’s Desert Storm crew but rolls as a free agent, struggles with the limitations of the format. “I was a song MC,” he says. “I love to tell my story. But I got with Clue, and he’s the outlet to the streets.” That piece of luck has also hamstrung some of his evolution as an artist. “People fall victim to this idea like if you’re tough, you don’t cry,” he says. “But shit gets deep, you know? I cry. Or if you’re tough you ain’t fly. I get fly! I think I’m flyer then Kanye!”

For now Bundles patiently waits. “My next mixtape is called Bidding War because that’s what it is,” Bundles says. “If you call yourself hip-hop and you have ears, you’re feeling the kid.” Nonetheless he remains unsigned. When Bundles throws darts on tracks like, “Everybody talking about trying to bring it home/ When all you hear on the radio is, ‘Who? Mike Jones!’” you can sense exasperation at the state of New York’s place in the game, and some resignation to the fact that in order to beat Mike Jones, or at least get to his level, Bundles will have to embrace what made Jones popular. 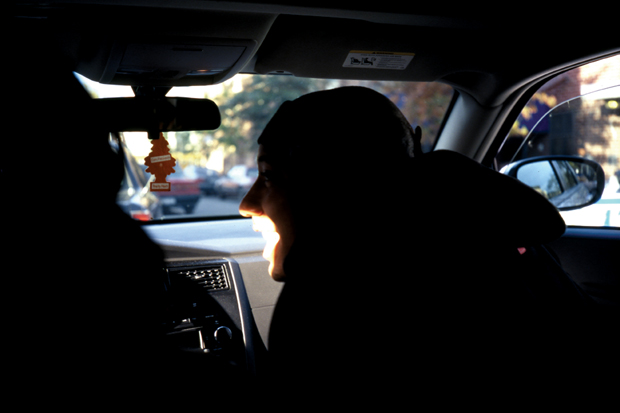 Bed-Stuy’s Maino comes to the game a little older and maybe a little wiser than Papoose and Stack. As Three 6 Mafia’s “Stay Fly” blasts out of a souped-up station wagon, testing the speed limits of BK’s side streets, someone says, “Buck murdered this shit.” Maino responds, “All them niggas murdered it.”

“My career is only two and a half years old,” Maino says. “I was in prison and I came home and got right into rap. I came home at the height of the crunk era, 2003. The South was dictating policy. Which is fine. That music is in my car right now. But I’m from Brooklyn. I’m from New York. What am I supposed to do?” What he did was look for the middle ground between banging in a white tee—making club music to throw a bow to—and honoring the tradition he grew up with by playing the NY corner in a Carhart jacket. “The labels see that New York doesn’t really have its mojo right now. There’s no reason why dudes like Papoose and Stack Bundles shouldn’t be signed. I’m lucky.” Maino may be lucky to be a new New York rapper signed to a major, but he’s also doing something different, something that the other two haven’t figured out just yet—he’s making songs. On tracks like “I’m Different”, “It’s Working” or his underground hit “Rumors”, he shows off some of the same qualities that made 50 Cent a money-printing machine—a sharp ear for beats, a knack for executing concepts (even if those concepts are as simple as “let’s get this money”) and an ability to make every line, no matter how pedestrian the subject matter, pop. “I’ve never been the most lyrical cat. I come from the school of thought that’s just, Let me make good music,” Maino says. When he talks about New York hip-hop, he sounds like he’s running for office, and on Marcy Avenue in Bed-Stuy, when Maino hits the block, Brooklyn seems to come alive. The younger guys outside of the bodega all give him knowing pounds and start catching up with him, a random drunk tries to get into his car, and little kids embrace him in knee-high hugs. Maino gets love in the hood, but he knows that hood love is not enough. “Instead of trying to be super lyrical and out-rapping each other, we need to make better songs, bigger hooks,” he says, his voice rising. “Record companies will tell you, ‘Yo, 50% beat, 50% hook. We do not give a fuck what you are saying in between.’” It’s a revelation that doesn’t bode well for those who excel at everything in between. “We can’t just make freestyles,” Maino says. “That’s not what’s going to be in the Top 40. The average fan is not a lyrical connoisseur. In order to win our city back, we have to give the people what they want.”