We didn’t know flip-all about Ultra before heading to Miami last week, and this turned out to be a good thing. “Ultra? Aren’t you scaaared?” acquaintances would hiss when they learned of our plans. Or another favorite: “What a nightmare!” Thanks everyone, go fuck yourselves. People you know will say unhelpful stuff like this when they’re trying to indirectly kill you, and the best thing to do is throw up a palm and turn away. Of course it would be crazy—it’s the world’s largest electronic dance music festival, capping off one of the world’s largest electronic dance music conferences (Miami Music Week), in a city that’s bananas for electronic dance music. 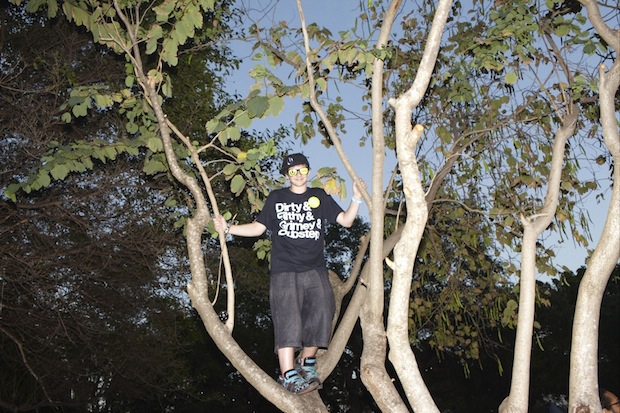 That said, it is true we were not sufficiently prepared spiritually or psychically for the things we witnessed this week, and we’re only partly referring to the adult males sucking on blinking neon pacifiers. Shit got anthropological. Hold our hand while we tell you about it.

So now that dance music has taken over the world as the pop currency du jour—pushing aside hip-hop, kicking even more dirt on the grave of guitar-driven rock—the kids all come out en masse for Ultra, which hosts the biggest names in EDM (Avicii, Armin van Buuren, David Guetta, Skrillex) as well as electronically oriented crossover bands like New Order, M83 and Kraftwerk, all of whom played the festival this year. The high attendance estimate for Ultra 2012—which sold out in record time, mind you—is 175,000 people. That is roughly the entire population of Ft. Lauderdale. Compare that to the (paltry!) 16,000 or so music attendees at SXSW 2011, then compress it into just three days and one location—under scorching sunshine in downtown Miami’s Bayfront Park—and you’ll begin to glimpse the dark majesty of the Ultra enterprise. Friday is an eight-hour day, but on Saturday and Sunday, the festival runs from noon to midnight. Even better: there are no ins and outs. We have not seen Hunger Games nor read the book, but there seem to be certain thematic similarities in play here. The stakes feel high. You need to hoard your water; you need to have a plan. This is about survival. 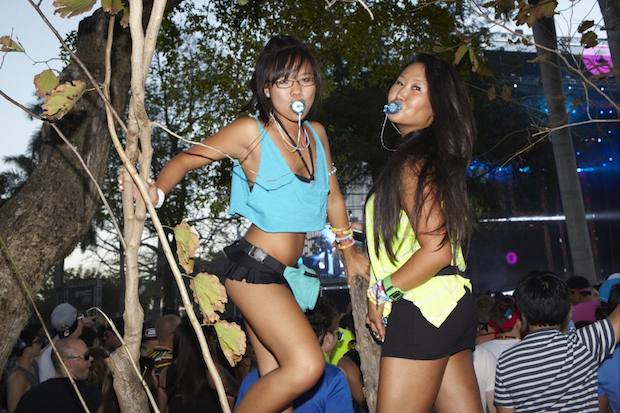 Just outside Bayfront Park, a statue of the aristocratic 19th century general Simon Bolivar presides proudly over North 3rd Street. We will think of his dignity several times over the next few days, especially when the air around him is throbbing with muddy bass from eight simultaneous performances and a pair of 16-year-old girls in bikinis and angel wings make out vigorously in front of him for an audience of their peers.

Then there’s the bank of Port-a-Potties inside the festival perfectly centered under a street sign reading “Yitzhak Rabin Boulevard.” Dude.

Of the eight stages spread throughout the park, we will spend the most time at the Live Stage, which hosts the actual bands and is almost never filled to capacity, and the much bigger Main Stage, which is so freaking huge it warrants two Jumbotrons. DJs like Skrillex, Justice and Avicii play here and there are so many people swarming the area they are, quite literally, falling from the trees. 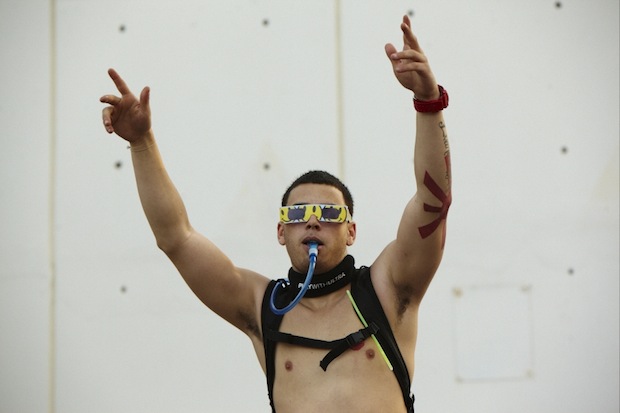 Ultra is so densely packed that over the weekend, friends will scream and clutch one another upon being reunited, as if they’ve all been off on private Hobbit-style missions for years. Which, when you’re 17 and on drugs, is probably exactly how it feels. 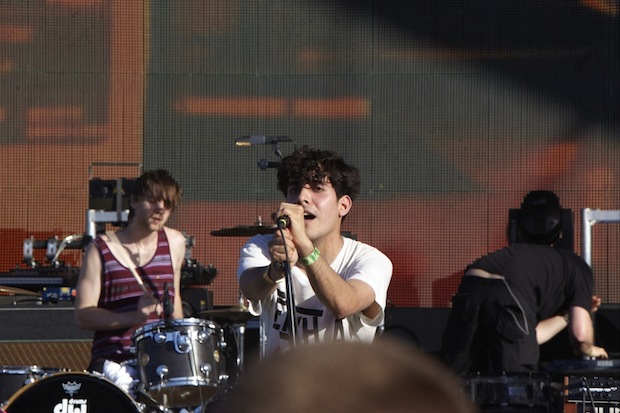 The very first band we see is Neon Indian at the Live Stage amphitheatre. “I feel like we’re at a seminar right now,” says singer Alan Palomo, surveying the setting. Yes, it’s more befitting of a Tchaikovsky concerto or a class on post-structural theory than electronic noise but, as Palomo points out, he could always “accept some questions about, I dunno, the effect of really loud monitors.” Then New Order comes out and opens with “Crystal.” That’s pretty cool. Bernard Sumner apologizes for wearing his shades. “Can you turn the sun off?” he asks the audience. Sorry, Bernie!

A dude dressed in a bright-green insect costume on stilts that look like devil’s hooves scuttles down the aisle. We’ll be seeing him again.

Next we have Miike Snow. Andrew Wyatt peacocks around stage, up by the mic stand, then sitting at the piano. A hulking piece of equipment looms center stage—could it be the Blob they built in Sweden for the new live show? The band serenades us with a lovely version of “Silvia,” which is soon obliterated by the earwig-style refrain of “Paddling Out.” Paddling out, paddling out! 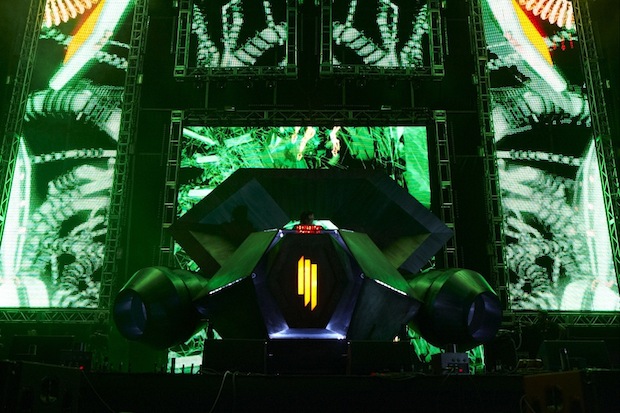 Night falls and we’re feeling guilty about having only seen bands so far—not really the crux of the festival, as the thin crowds indicate. So we do something sporting and make the pilgrimage to the Main Stage to see what the Skrillex fuss is all about. Ah, so this is where everyone has been hanging out. We can’t even make him out on the stage—he is but a speck in the distance. We last two songs of unholy Korn-and-spaceguns sonic lurching before the glimmerings of a migraine set in.

On the way out we are confronted with a dozen iterations of the same scenario: someone furiously waving a glowstick in front of a friend’s catatonic face. We also count at least six girls in tears. 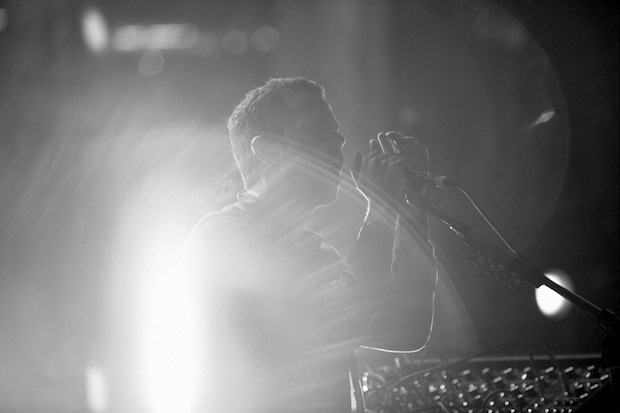 Day Two brings us Little Dragon, featuring the charismatic leader Yukimi Nagano, who shoots imaginary arrows into the sky with her imaginary bow, and hammers the air (and sometimes a drum pad) with her solitary drumstick. This chick seems like fun. M83 is due on at 8, but at 8:46 there’s still no sign of them. This is as packed as the Live Stage will get all weekend, and the natives are restless. Someone hurls an open bottle of water toward the stage. Finally Anthony Gonzalez and Co. emerge with apologies. “We just had a nightmare of technical problems onstage,” he says, launching into a slaying version of “Midnight City.” They play for twelve minutes—just two songs—and are the best thing we see all weekend. A pity Ultra’s strictly enforced schedule had to kill the momentum. 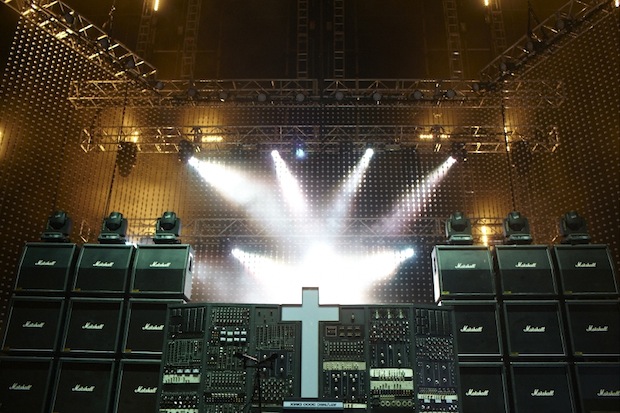 Walking over to the Main Stage for the French DJ-duo Justice, we puzzle over a scrap of conversation overheard between two earnest young bucks: “I’ve always been more into the Asian/Buddhist/Eastern thing. Are you more into the Weezer thing?” It’s been a long day, so we leave before Avicii. In the morning we will learn that Madonna joined him onstage. 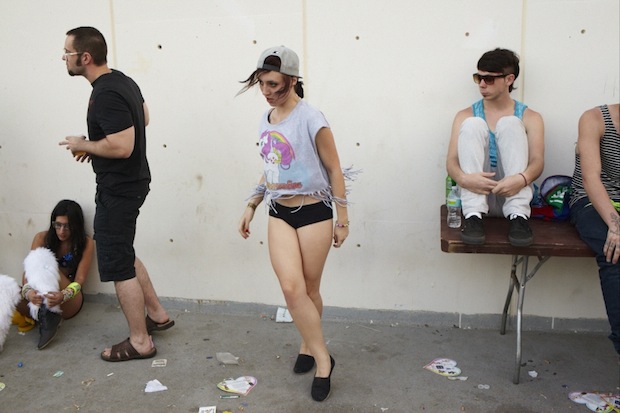 By Sunday we have this shit locked down. We know where the “good” bathrooms are, the shortest route from the Live Stage to the UMF Ibiza Stage, the best arepa stand. We are in fighting form. We are prepared to max this out. 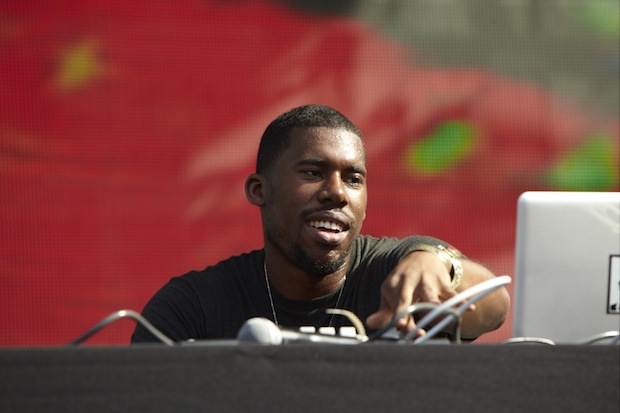 The two British dudes from SBTRKT ask to turn up the sub. Flying Lotus works his board like a mad scientist, while dragon’s-breath blasts of vertical smoke shoot into the air. The bass at Art Department’s show is literally vision-blurring. We accidentally sneak backstage at Armin Van Buuren, mistaking the stage for the one where Gui Boratto is playing. Van Buuren is on some kind of radiant Jesus tip, extending his arms in the air and beaming, while thousands of bodies writhe before him. We finally make it to Gui Boratto, who leaves the stage with a half-finished bottle of Jack Daniels and a big grin. 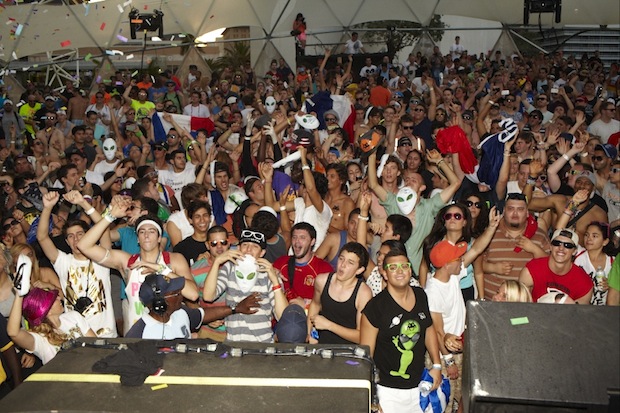 Inside a geodesic dome nearby, a full-on rave is going down, complete with chicks wilding out on an elevated platform. Here we spot the final of Ultra’s way-too-perfect, on-the-nose visual metaphors: on the ground underfoot, a pair of discarded, formerly white angel wings gets trampled by the heaving crowd. Ultra my friend, you make it too easy.