Today, Beastie Boys MC Adam Yauch aka MCA passed away. In this feature from 2004's FADER #23, Eric Ducker remembers his first encounter with the group's music and considers their wide influence. A postscript to this story, written today by Ducker, can be found here.

The boys are back to remind you exactly why they’re hip-hop legends. Maybe it’s just semantics, but the Beastie Boys invented a language.

It was around 1979 or 1980, and it happened like this: Michael Diamond was in the student lounge of St Ann’s, his hippie-ish New York high school, when his friend Raymond Rozado threw in a Harlem World battle tape. During lunch period at Edward R Murrow in Brooklyn, Adam Yauch snuck out to get a slice and heard “Rapper’s Delight” for the first time, playing on the radio in a pizzeria. Adam Horowitz had already heard the Sugarhill Gang and “The Breaks” by Kurtis Blow, but then his brother came home with a 12-inch of Jimmy Spicer’s “Adventures Of Super Rhymes”. That’s how the Beastie Boys—Mike D, MCA and Ad-Rock—got into rap music. “It was more real,” says Horowitz 25 years later. “I just related to it a lot more. I don’t know what specifically set it apart, but it wasn’t like… love ballads. My head wasn’t at where Cat Stevens was. It just hit me at the right time.”

Actually, it happened like this. It was 1986, and I heard the Beastie Boys during recess on my elementary school’s concrete baseball diamond. Three big kids stood in a circle just off of third base reciting “Paul Revere” line for line. When they got to the Ad-Rock line about doing it “with a Wiffleball bat” it was so raw and confusing to the seven year-old me that during lunch I found my older brother to ask him whose song it was.

It wasn’t the first time I’d heard hip-hop; I’d already memorized the Treacherous Three’s “Xmas Rap” from Beat Street because I watched it on VHS every morning before school. Other vivid memories: hearing “Roxanne Roxanne” and “Jam On It” on Jesse Edmunds’s boombox at his dad’s house. Fast-forwarding my friend Jono’s copy of Bigger And Deffer to get to “The Bristol Hotel”. Seeing the video for “Night Of The Living Baseheads” on Yo! MTV Raps. And of course, the Beastie Boys—clandestinely listening to License To Ill’s “Girls” over and over on my Walkman during a field trip to the Pacific Film Archives. 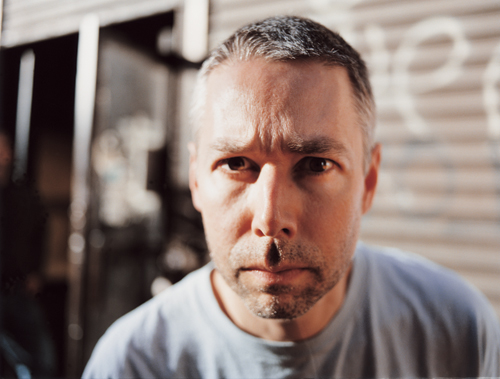 But the group wasn’t important to me until 1992. I was 13 the year their third album Check Your Head came out, and not knowing better—or much of anything at all—at first I dismissed the Beastie Boys’ return. I mean, in the video for “Pass The Mic” Mike D wore black overalls with only one strap, just like the clueless seventh graders we clowned. I bought it (on a lark, I told myself) the day after classes ended and ended up keeping it in my boombox for the duration of my first summer with a job.

In between that summer before my freshman year and the release of Ill Communication two years later (that Tuesday I got to the record store as soon as my brother would drive me) I rediscovered the Beasties’ second album Paul’s Boutique. I bought the tape when it was released in 1989, but at the time I thought it wasn’t nearly as good as Appetite For Destruction—I was only ten.

But on this go around Paul’s Boutique hit me at the right time. It was fun, strange, clever, complicated, braggadocious, kind of retarded, smoked-out, funky and everything else I imagined myself to be. It also sounded like nothing else my classmates—wrapped up in the misogynistic thrill of Dr Dre or the three-decade-long allure of the Grateful Dead—listened to. Even the kids who were just playing “Sabotage” in the school van before basketball games or still worshipping the hydraulic phallus of License To Ill wouldn’t—couldn’t—appreciate it. Paul’s Boutique was a secret handshake, and the music was a key to a combination of juvenile energy and hip knowledge that sounded right as I spent my weekends making mixtapes, hotboxing in Oakland Hills cul-de-sacs, generally dorking out and imagining the person that I might become but usually drawing a blank. 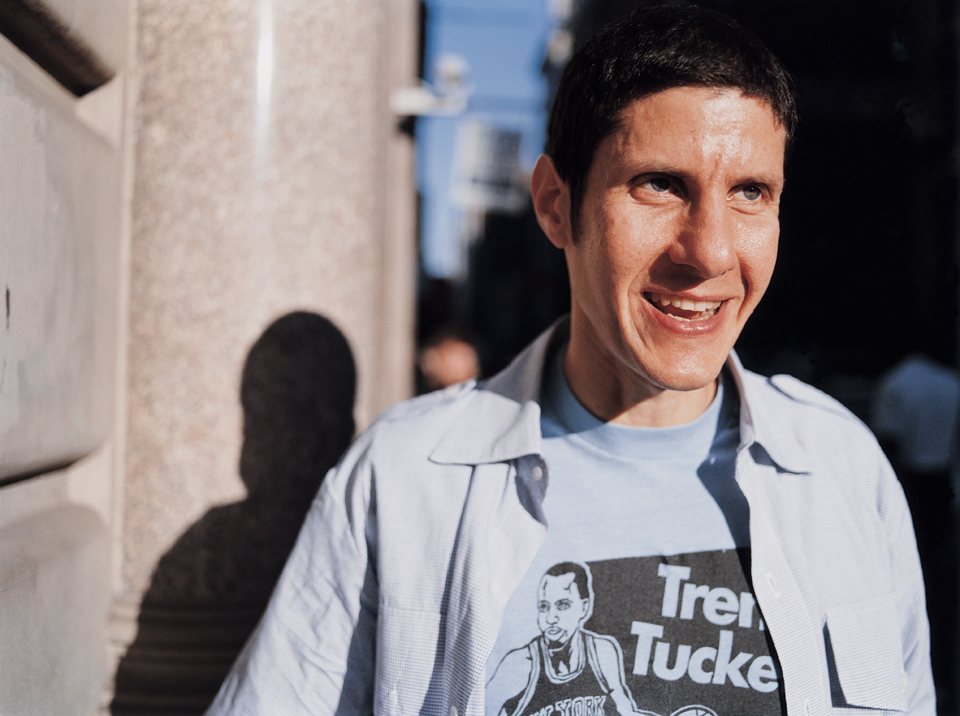 I was a fan of the Beastie Boys, not unlike the kind of fans the Beastie Boys acknowledged themselves to be—curious, open-minded and believers in the transformative powers of learning about the dope shit. The clues in the samples they chose grew my record collection (thanks for Eugene McDaniels and the Commodores, I could have done without Sweet), but their name-dropping lyrics, album art direction, Grand Royal magazine—in short, the industry of personal style they -produced—opened passageways into worlds beyond my immediate grasp. I saw The Taking Of The Pelham 123 because Ad-Rock mentioned it in “Sure Shot,” I knew who Haze was because of the booklet for Check Your Head, and like they said in “Sounds Of Science,” I rocked my Adidas and never rocked Fila. I had a Bruce Lee poster on my bedroom wall and Hunter S. Thompson books on my floor. I had an ill-conceived flirtation with visors.

The Beastie Boys’ new album To The 5 Boroughs is the group’s first entirely rap record in 15 years. The seed for the decision to return to their roots (as it were) came shortly after 9/11, when they organized a -two-night benefit show at New York’s Hammerstein Ballroom for the families of those without insurance killed in the World Trade Center. Because the show had to be put together quickly, the group didn’t have time to rehearse as a full band, so they decided to just perform a hip-hop set.

In the initial planning for 5 Boroughs playing instruments was still a possibility. “When we set up the studio we set up some drums and amps and eventually got together and jammed a little,” says Yauch. “At first we had a plan where we would work on hip-hop a couple days a week and play a couple days a week. Then we started working on hip-hop more and going in that direction, and at some point along the way we said, ‘Fuck it, let’s make a hip-hop album.’” 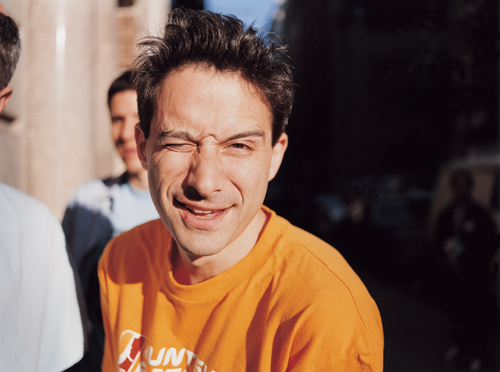 This choice was as natural as the one they made when they picked up instruments over a decade ago for Check Your Head. “The decision to play was inspired by listening to a lot of the music we had been sampling,” Diamond explains of those sessions. “Once we started doing it, it was like, ‘That felt right, that’s the shit we’re going to do.’ This was true in reverse this time around. We all started bringing in beats and working on beats together. As soon as that collaboration started, it was like, ‘That’s what we’re doing now.’” The Beastie Boys also say they were influenced by the ease (and the novelty)—of unassisted production on home computers or laptops—a process so automatic that Horowitz says it’s “like making records at Kinko’s.”

As Matteo Pericoli’s cover art of the twin towers suggests, the album’s vibe is definitely Manhattan pre-millennial. Last year the word was that To The 5 Boroughs would be the Beastie Boys’ “political” album; this hasty statement was mainly based on “In A World Gone Mad”, the free MP3 they released at the start of the war in Iraq. But while there are mentions of “unilateral disarm” and “SUVs strung out on OPEC,” these brief references are the only lyrics that reveal 5 Boroughs was written this decade. “In A World Gone Mad” isn’t even on 5 Boroughs.“This is probably the most immature record we’ve made,” Diamond says. “I’d come home from the studio and my wife [director Tamra Davis] would ask how things were going. I’d have to explain to her that we’re making some juvenile shit.”

Though the album isn’t immature in that they’ve brought back the violence and misogyny of their early rap records, it’s immature in terms of its basic rhyme schemes, word play and punchlines. “Some of what’s in there is just trying to have a good time and crack each other up,” explains Yauch. “Some of it is trying to get across what we might be feeling politically living through the last few years with this administration going and attacking other parts of the world. It’s a couple years of us hanging out.”

In some senses, the Beastie Boys doing an all hip-hop album is like Eric Clapton doing a blues record: it’s a complete embrace and return to the musical mainline of their career. It’s also somehow brave; releasing a nostalgic rap record is a risk because most hip-hop artists still making music—aside from maybe De La Soul and Jay-Z—don’t acknowledge their age, or the process of aging itself. “Rap music is one of the very few types of music where what’s happening now is what you listen to and you rarely go back,” says Horowitz. “It’s not like with rock records where you have to listen to the first Led Zeppelin album and obviously if you’re making a mixtape you have to throw on an old James Brown record. But as much as you love old school rap records, you probably don’t listen to them that much. They’re more in the compartment in your heart and head -somewhere as opposed to actually on your turntables.”

When the last Beasties album Hello Nasty came out in the summer of 1998 it was the only record Rasputin’s on Telegraph Ave in Berkeley played during store hours for about a week. At the smoothie shop where I worked, after we closed the doors we’d pump it over the stereo while mopping the floors and wiping down the blenders. And when I got back to college for fall semester, pretty much all my friends had bought a copy. 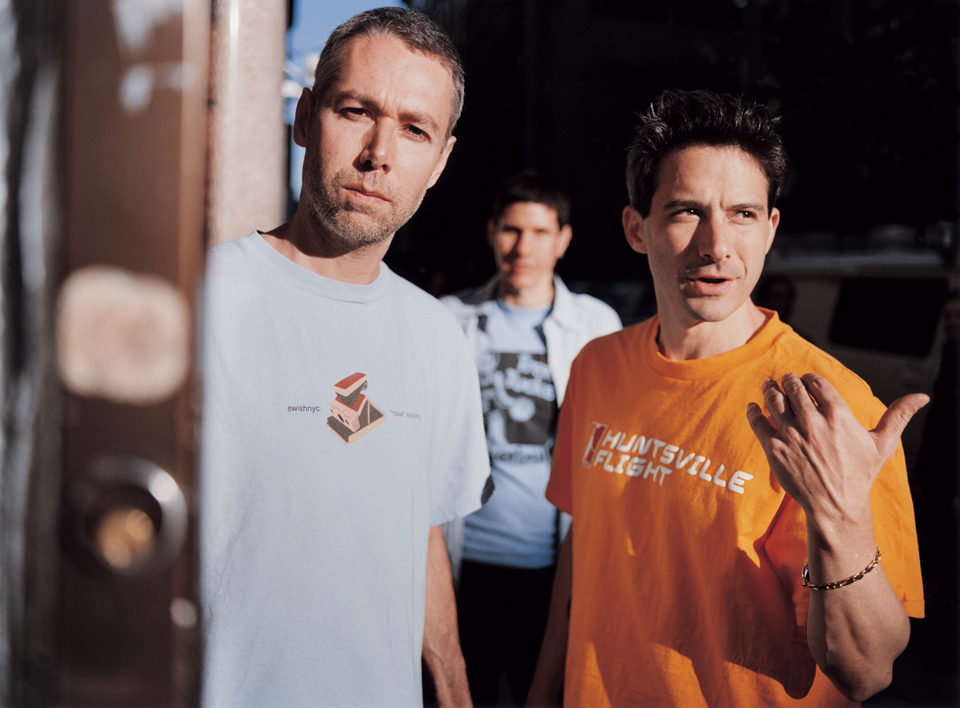 That was six years ago. These days cool sneakers are pretty low on my list of concerns, and not simply because I mainly wear flip-flops. I’m trying to figure out where the Beastie Boys belong for me now, in my heart or on my turntable. While I still find the video for “Body Movin’” endearingly goofy, I was embarrassed when I saw the sophomoric antics on the video for their new single “Ch-Check It Out”. But maybe To The 5 Boroughs isn’t a record meant for me. Perhaps it's for kids whose first show was a parent drop-off at a late ’90s concert in-the-round, or even their younger siblings.

I’ve long maintained that hip-hop won’t get better—whatever “better” means—until someone figures out a better rhyme for “party” than “Bacardi.” For the better part of the last two decades, the Beastie Boys have been some of the most likely rappers to stumble upon that holy grail. To me they’ve always been like older, distant cousins: guys I didn’t see that often, but when I did I could learn about cool records, bite a little of their style, and get a sense of how my life should be going in ten or 15 years. Maybe that’s why Check Your Head has been sounding so good lately as I settle down in LA, get a dog and figure out which of my immaturities I want to keep.

Two years ago I was at the Museum of Natural History on a Sunday in New York when I saw Adam Yauch with his preschool-aged daughter. He was wearing an orange and yellow camouflage sweatshirt with baggy pants. He was about to turn 40, but his outfit didn’t look strange on him. He just looked like how more dads are going to start looking. Well, at least how I probably will.