The reigning sound of rap in Chicago—with toughly detached deliveries and muddy beats as big as the Sears Tower—bears little obvious resemblance to the sound of just a few years ago, in part because some of today’s crop didn’t even graduate middle school until after Kanye West’s Graduation dropped. Footnotes is the section in our magazine where we take a deeper look at the music surrounding our feature artists. Read Felipe Delerme’s FADER #81 cover story on Chief Keef and Chicago rap, and check out our notes below.


Kanye f. Pusha T, Chief Keef, Jadakiss and Big Sean, “I Don’t Like (Remix)” (Internet 2012)
The obvious irony that Kanye West has rallied the troops around something he absolutely does like should not take away from the fact that he’s co-opted Chief Keef’s adolescent fed-upedness with great aplomb. Like so many of the couture designers he adores, here Kanye acts as art director to his miscreant muses, taking cues from the street and wrapping them up in lavish production like a cultivated aesthete. But unlike couture fashion, the benefits here are mutual: Keef gets a co-sign from a rap god, and Kanye renews people’s faith in his own creation myth, even if he’s increasingly more at home on Boulevard Saint-Germain than in the boroughs of his Chicago youth. AB


Bump J, “Move Around” Nothing to Lose (Atlantic 2005)
In 2005, Bump J was Chicago’s most beloved street rapper, bestowed with the gang nickname “Chief.” His blasted-from-parked-cars local buzz grabbed today’s drill crowd just when they were first getting into music, making Bump and his million-dollar Atlantic contract, for some, their first local legend. Now, Bump’s career is as cautionary as it is inspirational: he’s sitting halfway through a 10-year stint for bank robbery in Texas. His biggest song (and the hardest track ever featured in a national McDonald’s commercial) was “Move Around,” which opened with a typically self-aggrandizing adlib from its producer, Kanye West. Respectfully, though, West turned the spotlight in the other direction on his verse on the “I Don’t Like” remix, rapping Free Bump J, real nigga for life. DC


Chief Keef, “3Hunna” Back From the Dead (Internet 2012)
Ultimately, any Chief Keef song is pretty similar to the next. “3Hunna” builds on the gunshots and minimal rapping of “Bang” and “I Don’t Like,” but adds Auto-Tune. Over Young Chop’s absurdly maximal beat, Keef’s voice is a perpetual flatline. The impulse for most rappers on a beat like this would be to yell and scream all over the place, but Keef seems like he could barely be bothered to say anything. It’s this dead-eyed, who-gives-a-fuck attitude that makes him so interesting, and it also makes his songs feel like the most nihilistic music on the planet. SHS


King Louie, “Val Venis” Dope & Shrimp (Epic 2012)
King Louie created the goofy Val Venis dance in January 2012 as an homage to the pro wrestler with a porn star alter ego. It goes like this: teeter from leg to leg, hands behind your head, then move them through your hair like you’re shampooing and gradually run them down your chest toward your crotch. Rub your belly, repeat. The dance pairs best with Louie’s track of the same name, his first single after signing to Epic. Producer C-Sick’s airy beat is made of three twinkling notes, with horn and gunshot exclamation points. On top, Louie is quick and loose, showing off carefree, fun-to-follow wordplay: All the lines in his first verse rhyme with know (slow, dose, dough, bro), and all the lines in the second rhyme with you (two-two, bruce bruce, Lou proof, smooth). The vocal tricks on “Val Venis” affirm Louie’s talent, a serious fuck you, just one delivered with a dance and stripteaser’s smile. NZ


Katie Got Bandz, “Ridin’ Round and We Drillin’” (Internet 2012)
Katie Got Bandz sounds like she could pummel you. She raps incredibly slowly, her voice verging on guttural. In an interview, she says,
“I used to be trigger happy. I used to play with guns. I don’t do that no more.” Good. It hasn’t made her any less aggressive on record. At worst she sounds unimpressed, not just by her surroundings but by life in general. Indifferent is the best thing a teenage rapper could be; that is what makes you cool. It doesn’t hurt that this Block On Da Trakk beat is terrifyingly minimal, hinging on big bell hits and spooky sounds. MS


Sasha Gohard, “What We Do” Glory Girl (Internet, 2011)
Sasha Gohard is a knockout, the kind of girl Tyra Banks would demand be given a pixie cut on America’s Next Top Model because her face is striking enough on its own. In the video for her enemy-deflating “What We Do,” she’s sitting on a courtyard bench in the projects with a couple girlfriends and a bunch of boys, including Chief Keef. Kids take turns rolling around on an office chair, presumably dragged outside from someone’s computer desk. The boys, huddled and expressionless, render themselves basically invisible, so all you pay attention to is Sasha and the girls on her team. Alternating between cold smirks and toothy smiles, they look obviously in charge of the block. It’s not necessary for Sasha to pull out a sizable handgun, but in a later scene filmed indoors with just the ladies, she does it anyway. NZ 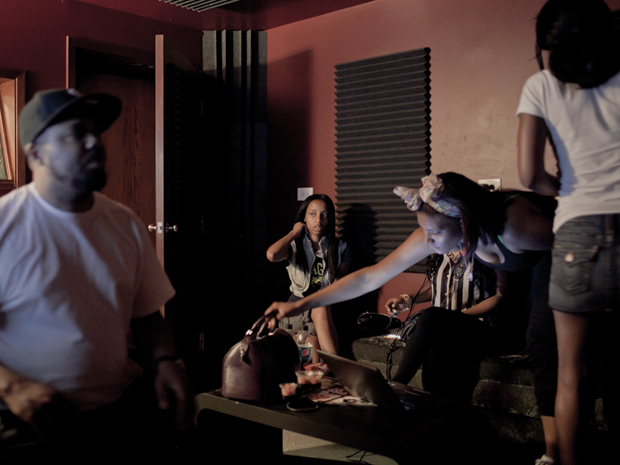