In a couple key ways, if you've been to one music festival, you've basically been to most of them. I don't say that in a disparaging way, more just to point out that at these things you're going to get overwhelmed by the sheer number of bands that you want to see. Better to take a breather, step back and pick the stuff that you really, really know you'll enjoy.

Portland's Music Fest Northwest is an interesting festival in that regard. Spread out at venues across the entire city, it is 100% guaranteed that you won't see every single thing you want to see. It's just not possible, sort of like the olden times before having access to every album ever immediately was a thing. 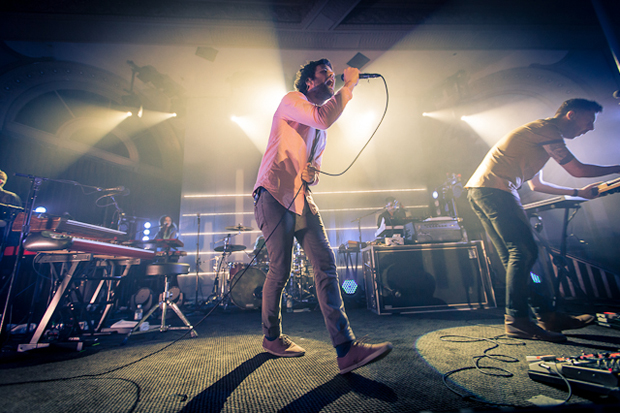 On Wednesday night, Passion Pit played to a packed, all-ages room. At this point, they're pros, and they play like they're on a reunion tour with fifty hits under their belt. Every song condenses huge emotional moments into bite size snippets, their songs follow a specific structure: big drum hit, clap-along synth, and then a massive chorus that, if you can't sing along, you might as well hum because it's catchy enough. Passion Pit are playing with a classic song formulas, and that's part of their appeal. Sometimes people want what already exists because it's catharsis through familiarity—driving the same points home in the same way until you either get it or decide it's not for you. Ultimately, Passion Pit are a dark band hiding behind huge songs. If they ever decide to go fully bleak, will people still love it? Will it be more honest? It's hard to tell. Maybe their honesty comes from the fact that they're able to hide the dark meat of their lyrics behind Michael Angelakos' falsetto, which can be (potentially purposefully) hard to decipher and wordy. Even "Sleepyhead," their breakout hit, had more members in the audience humming than actually singing the words. Maybe they prefer it that way. 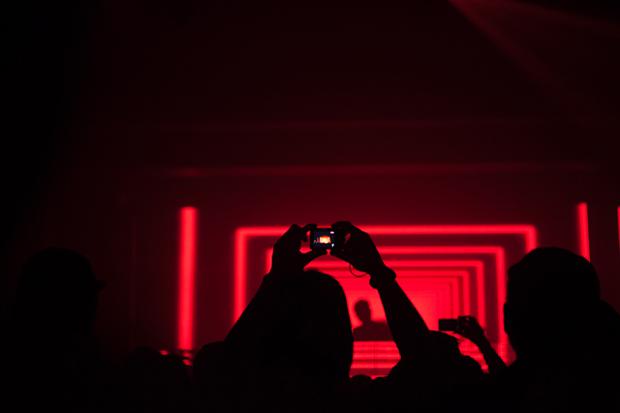 Across town, Nike had a massive venue, complete with complicated, often pretty, light shows that looked like they were lifted and magnified from the Fuel Bands that were being promoted in conjunction with their shows. If you haven't seen these things yet—basically it's a watch that also counts your steps and your calories and puts all your daily movement toward a singular goal that you set up. A lot of people inside the venue were wearing them, and considering Nike's lineup skewed heavily electronic, there was a lot of movement, and a lot of lights from all sides. Jacques Greene kicked things off, which is actually a pretty risky move, considering he structured his set almost like he was preparing to DJ all night, starting slow and ambient before building into more straightforward dance tracks. But it wasn't a constant build, Greene has a great handle on the peaks and valleys of a DJ set, going from moody one minute to ecstatic the next, as if it were one big composition instead of a selection of patchworked songs. In contrast, Nosaj Thing opened a door into his goopy, disorienting world and then shoved everyone through. Against a heavy red backdrop, he worked in silhouette, his music crawling and oozing. As the set progressed, it got downright immersive, like he brought his own specific brand of smog-choked Los Angeles funeral music to Portland and was going to keep playing it until everyone got into it. As weird and disorienting as it was, it didn't take very long. Of the three artists who played there, Flying Lotus is the most unabashedly weird on record. He makes layered, busy songs, that take countless listens to cohere. It's not easy music, but it's fun to listen to. His set, on the other hand, was much more traditional, like he was pulling us all out of the amazing smog that Nosaj Thing created and into an actual club. All together, it turned out to be a brilliant bit of lineup synchronicity, and I'm glad the two artists already work together because seeing them one after another felt like the best possible way to hear their music. 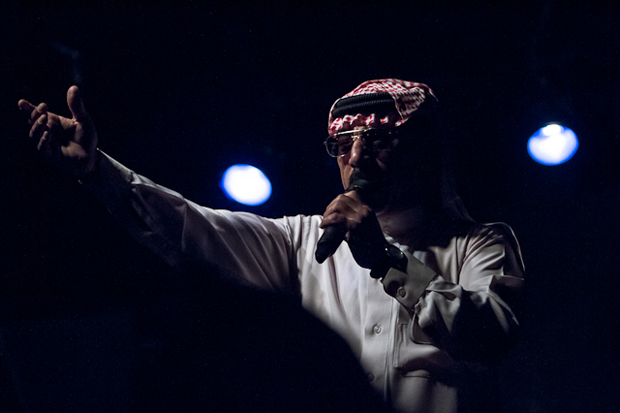 Any chance I get to see Omar Souleyman, I'm going to take it. Even if it's in a tiny club that you enter into through an alley, and it's sparsely attended in a way that makes it feel like an awkward birthday party, or the kind of nightmare people that are about to be married have where no one shows up to their wedding except the people they felt obligated to invite. That said, Souleyman is a master at working with nothing. He stares just over the crowd, singing and clapping as his keyboard player goes bananas. There were probably only 100 people watching him, but it might as well have been 20,000. 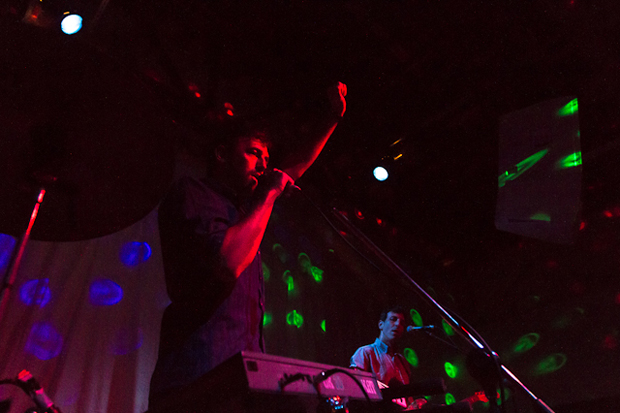 Not far away, I caught the second half of Tanlines’ set, which was completely packed. Watching this band grow has been amazing, mostly because what they are now is so unique. It's not often that you get a band that's able to write songs that, if they heard them, would probably make 16-year-olds understand their place in the world, just as much as they can uniquely capture that weird "I'm so bummed that it's literally laughable" feeling that comes from being an adult. 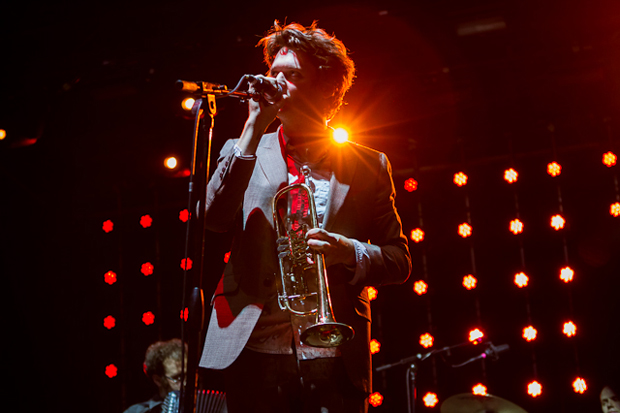 On Thursday, I saw Beirut, the only outdoor show of my entire time in Portland, which was nice because it was beautiful. It's always weird seeing such a self-consciously old timey band like Beirut. There's almost no concession to any modern songwriting tropes in his music. Zach Condon is an excellent songwriter with a clear vision of what he wants to achieve every step of the way.These songs could have existed in just about any decade since the ’20s and they would probably sound exactly the same. If you miss out on all the wild shit of childhood, do you become Zach Condon? I'm not claiming he didn't have a normal childhood, just that he seems so obsessed with the past that it's like he's created a hermetic world around himself. A woman standing next to me in a long floral dress was smiling to the sky, swaying and singing along, completely transported, like she existed in a separate, alternate reality, created by Beirut. Maybe you don't need to feel like you're missing out on popular culture or being a kid just to be a kid. Condon's music is escapist, and if you're into it, he's perfectly happy to take you with him. 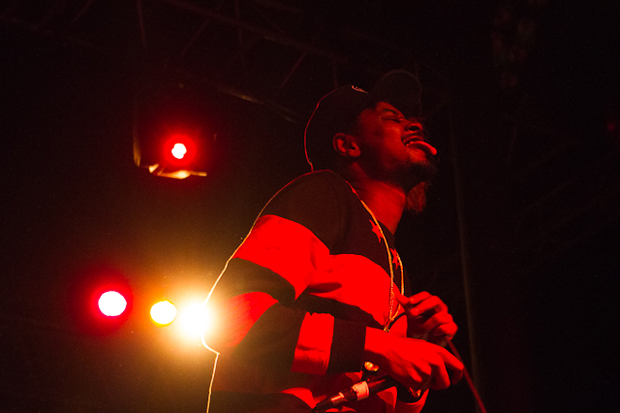 Going from Beirut to Danny Brown was like immediately thrusting your hand directly into a blue flame. His songs aren't necessarily conducive to a live set, they're wordy and his voice is often a strangled yelp, but over the past couple years, he's managed to hone that into something pretty amazing. On stage, Brown is all tongue and gangly limbs, stomping across the stage like a praying mantis. By the time he performed "Die Like a Rockstar" the entire crowd was in a frenzy. 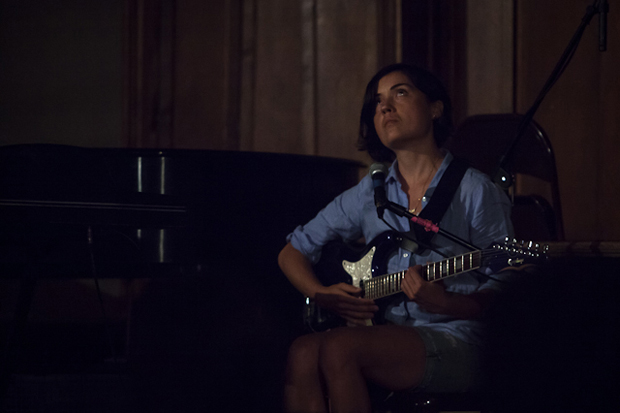 As much as going from Beirut to Danny Brown felt shocking, going from Danny Brown to Mirrorring, the collaborative project between Grouper and Tiny Vipers, was even more out there. The duo played in an old church, using the natural acoustics of the room to emphasize even the smallest sounds. On record, Mirrorring sounds fully collaborative, with Grouper's ambient song sketches pushing against Tiny Vipers' more concrete, powerful vocal performances. At this show, though, it was about emphasizing what each artist does so well individually, and then letting those things butt up against each other in a way that emphasized ambient drifts and both their considerable vocal abilities. 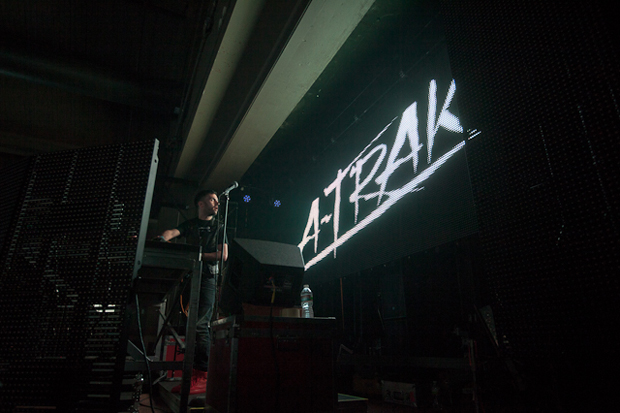 And then, of course, there's A-Trak. You know how sometimes you know a dude, and whenever that dude shows up, you get all excited because he's always the one that makes everyone have a great time by sheer force of will? A-Trak is like that, except he's more just a really excellent DJ, who knows exactly how to get people freaking out before he's even 10 minutes into his set—at which point, it was all shirts off, a mass of people bouncing in tandem. Sometimes it feels like he's created an entire subgenre of dance music, specifically so he can get people to freak out as quickly as possible. 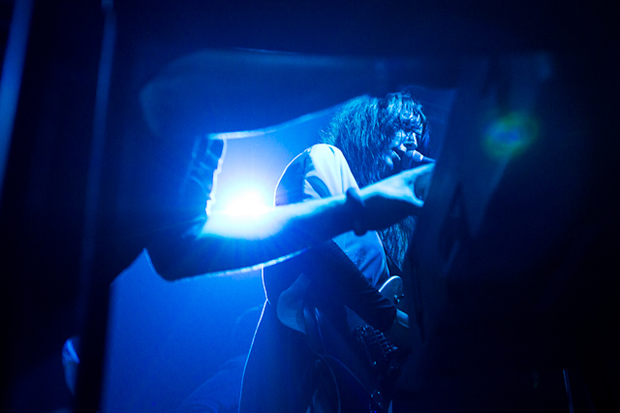 To further emphasize the weirdness that is any music festival, I immediately went from A-Trak to the much more somber Chelsea Wolfe, who has an effortless, somewhat terrifying, ability to dominate the stage. she was constantly cradling her face in her hands, her hair hanging limply over her face, while her band whipped and whirled around her. Like Tanlines and Danny Brown, it felt like Wolfe was on the verge of something a little bigger. Like the stage maybe couldn't quite contain her. 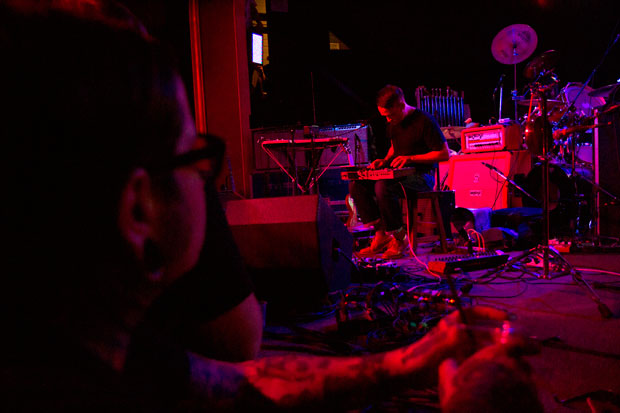 If listening to Jamie Stewart's Xiu Xiu project has ever made you feel uncomfortable, I wouldn't be surprised. It's some of the most honest, naked and fucked up music around. Except, on record, he's been playing with pop structures—writing songs with choruses and hooks that fence in his vocal outbursts. Live, he abandons that for the most part, going completely unhinged while strumming a guitar, shooting a slingshot at a gong for the percussion and yelping and screaming into a microphone. It makes for a cathartic, terrifyingly honest performance. At the end, someone from the crowd yelled out "It's okay!" maybe in an effort to comfort Stewart. But maybe Stewart is there to let people know it's okay that it isn't. 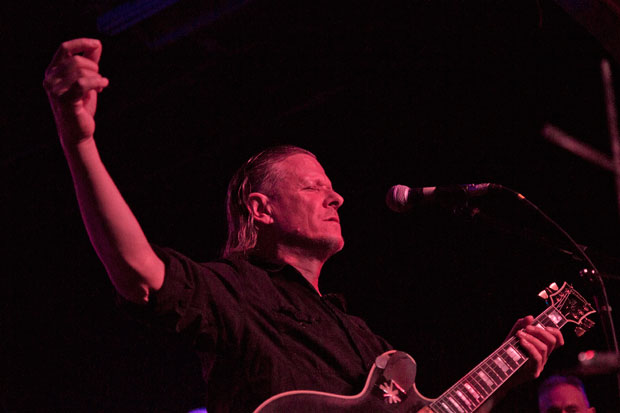 As Swans started to set up, just about the entire crowd put in ear plugs. Swans plays loud, long and relentlessly, and this time was no different. Michael Gira is such a commanding presence. His face looks like it's been chiseled from an ancient rock, and his baritone rings out across a room—I'm tempted to say effortlessly, but it can't be effortless. It's clear that there's a lot of blood and sweat that goes into Swans, and when they get going, it's like nothing else. 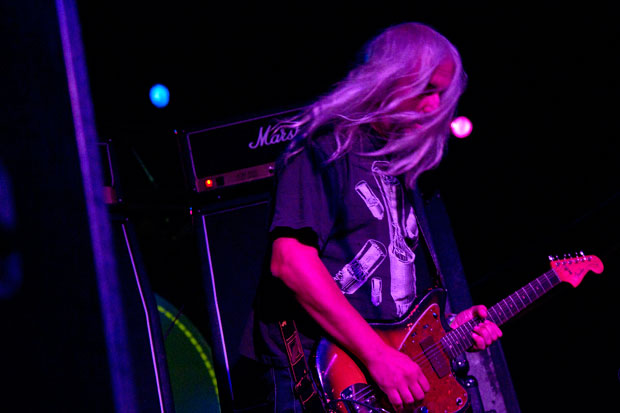 Dinosaur Jr were playing a quick cab ride away, and after all these years, it's amazing what kind of handle J. Mascis and co. have on some of their classics from Bug and You're Living All Over Me. Interspersed with newer material (which has consistently sounded great), Mascis barely spoke, instead just running through song after song, sounding like he just woke up three minutes before he got onstage. 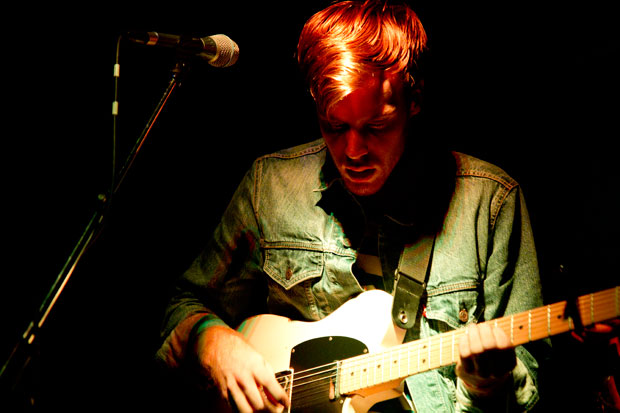 In the past couple years, I've seen Wild Nothing a countless number of times, but during their midnight set, the songs felt louder and faster, more rough edged. On Nocturne, their new record, each song feels like its own intricately produced world. It's a gorgeous, dusky album, but here those songs sounded even darker and messier. It felt like watching demo version of the album.

I'm genuinely not sure where else I could see Danny Brown and Mirrorring in the same night, and everything was just spread out enough that it never felt like I was getting bombarded with a bunch of incongruous artists in close proximity to each other. There are plenty of music festivals in the world, but Portland seems uniquely situated to host something like this. The shows were diverse (If you wanted to have an entirely experimental experience, you could, if you wanted a week's worth of dance parties, that was an option too). Basically, the only similarity between Music Fest Northwest and most other festivals, is that by the end you just want to sleep for a million years.