Despite being a hub of avant-garde fashion and a Petri dish of super-wild street style, it’s still famously difficult to purchase clothing from Tokyo designers anywhere but in Tokyo. Chiara Ippoliti knows this all too well: a family trip as a kid to Japan from her native Australia left her with such a hankering for clothes she saw there that she started visiting frequently, buying everything she could afford and smuggling it all back in her suitcase. At 22, with a degree in international relations to suit her cross-continental obsession, she’s opened a boutique called Pet Shop Girls in Melbourne dedicated to Japanese designers, allowing her to fully indulge her fashion fetish. At the store, she plays J-Pop online radio and spends hours doing heavy research through Japanese style blogs and magazines to find the hottest new stuff. Here, she gives us a primer in the Japanese fashions you need to know right now.

Playing Hard to Get

Trends in Australia are really heavily influenced by trends in Japan. We have so many international students from Hong Kong, Taiwan, China, Japan and Korea, so they bring these labels over with them, cult labels like Mercibeaucoup. Half of the reason I opened the store is because you can’t get Japanese labels online. Because they have a lot of fashion tourism in Japan, people think that exporting the labels would slow down tourism and—people wouldn’t be going there to buy the clothing. Some labels even refuse to ship outside the country.
Japan’s New Gothic Lolita

Juria is on all of the street style blogs and is pretty famous in Japan now. She’s 17 and she’s totally crazy. [Her style is] like Gothic Lolita, but in Japan, there are trends within trends, so within that Gothic Lolita trend, she’s got this kind of religious, possessed style. She mixes in a lot of vintage, a lot of accessories and face-painting, contacts that make it look like her eyes are rolling back in her head, and she always has a crucifix in the middle of her head. She often wears SARS masks, like a tragic widow. I guess she gets photographed for street-style blogs every 100 meters, and she’s probably from somewhere like the outer suburbs of rural Japan. A lot of the really cool kids come into Tokyo for the weekend. She wears these tights with flames all over them, which is the big trend right now—really detailed tights that are transparent with a landscape at the bottom. It’s only a matter of time before it’s a trend everywhere else, too.
The Japanese Alexa Chung

We carry this label WC that’s designed by Wakatsuki Chinatsu, who’s like the Japanese Alexa Chung. She started doing hosting jobs on TV and turned into this young fashion icon. She started her label only three years ago, and it’s so popular that her store in Shibuya [Tokyo’s infamous shopping district] opens at 10AM, which is earlier than all the other stores. She’ll always have a line of young kids and 20-year-olds who are waiting to get in, no matter what day it is. She has this kind of California-girl style in an ironic Japanese way. Not California girl as in the girls you see in LA, but the Japanese approach to it, which is very sexy but kind of insane. If a lot of Americans or Australians saw some of the stuff she makes, they’d think it was the epitome of trashy, but that’s the style. It’s this kind of slutty, sexy American style, like California-girl Lolita. 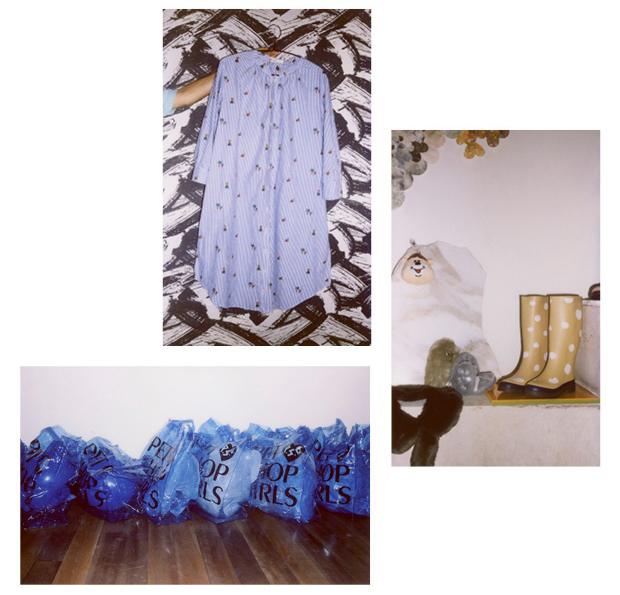 The label Belly Button has been around for 25 years and they really started the trend of crazy platform shoes. They’re influenced by Japanese geisha culture, a wedge that wraps around the back. And in the last five years, they’ve taken off like crazy. I mean every single style is platform and has this kind of geisha wedge where it goes up at the front and wraps around. In FRUiTS, the magazine where street style was basically invented, every second page someone would be wearing Belly Button shoes. They’re that popular. At the moment, the girl that they have working in the store, Yama, is pretty much a celebrity in Japan. People will stand outside the shop and take photos of her through the window because they’ve read about her on blogs.
Nature Girl Style

Ne-net is a brand we carry that’s famous for this kind of comfortable and natural fashion trend. [When you wear it] you look like maybe you’re in the city during the week, but on the weekend you have this little cabin in the mountains with your family. They’re not form-fitting, they’re very unisex in a wood creature kind of way. It’s that almost Scandinavian look, from a hippie culture where everything was very free and open. It’s all meant to be connected with nature, like beautiful lace dresses meant to look like raindrops. If you look in any Japanese magazines, there’ll always be a section of “back-to-nature” and “natural mountain girl” and “natural summer girl”—that kind of stuff.
The Crazier the Better

My friend at [Australian label] Perks and Mini always says to me, Don’t buy boring things; people don’t want basics anymore. No J Brand jeans or Alexander Wang leather jackets or American Apparel. As soon as we opened shop, I noticed that people would absolutely bypass the boring stuff and go straight for the crazy stuff, even if they were the most conservative people in the shop. With the economic climate, people don’t want to go into a shop and pay 500 dollars for a plain T-shirt that they could get from Uniqlo. They want something that is more unique and more detailed, that looks like work has gone into it, and that they can wear down the street and 50 people won’t have it. They’ll be happy to keep it for a long time. I think that helps us because a lot of these things are really unique and kind of crazy, so people want more of it.

Buy everything you just read about over at Pet Shop Girls' brand new online shop.