Tegan and Sara will release their seventh studio album in January, called Heartthrob, and while the Canadian twins have rarely been championed around these parts, their career longevity and obsessively supportive fan base ought to be an inspiration to any on-the-rise subject of a GEN F. On Heartthrob, the turn to more electronic pop music might surprise fans of their "folk-Wiccan nightmare" early days (a phrase Sara remembers from an old Spin review), but the screaming, instantly-sold-out crowd at Bowery Ballroom last week seemed wholly on board. Here, meeting at a midtown hotel before Tegan headed home to Vancouver for the first time in a month, the sisters talk Spanx, turning 30 and still being each others yin and yang after all these years.

At your concert at Bowery Ballroom, someone yelled out 'Nice tights!' and, Sara, you said thank you, and that wearing them was new for you. That seems like a weird and good place to start this interview… Why the switch? SARA: You know, it started a few months ago. We were shooting a music video and we were picking out clothes, whatever, and at the last minute Tegan had these pants hanging in her closet and I was like "These are awesome," and then when I grabbed them they were see-through tights with polka dots on them. And I was like "How does this all work?" You know? And everybody that was there, they were making fun of me because they were like, "Oh my god, you are not a girl. You have no idea. You're going to wear tights. And Spanx underneath them." I was like, I don't know, this feels very feminine and I'm not sure if I really understand it or feel it. So the stylist gave me these Spanx and I went into the bathroom and put these tights on and put the polka dot pants on. And all day long I was massaging my legs and touching my butt and I was like "This is the most comfortable thing I've ever worn." It feels like you're wearing nothing. It's so lovely. Anyways, so this has been my new thing. I'm a 30-year-old woman who's never worn tights. It's really confusing. When people notice I'm like "Yes! Thank You! Thank you for objectifying me, this one time."

From my understanding of your fans, and seeing their Tumblrs devoted to you, your being objectified doesn't seem very novel. SARA: It is novel. It is novel, because I think it's about the specific type of objectification that happens for us. We've been very conscious of not exploiting our sexuality. Or exploiting what we look like, because I think in today's society it's very institutionalized that if you become too much about something to look at and to observe as a woman, people just assume that your art has less value or that you're being duped or something. As much as I hate that, I'm incredibly aware of it. So we've really tried to negotiate not looking like pieces of shit, but also we have been very aware of the fact that we wanted to prove that we were a band. A real band, playing real music. This of course, no man would ever have to prove. But we have felt like we have had to prove it so there was a concern or a nervousness around playing up our image too much. And now that I'm older, I don't care what people think. And it's on our own terms and it's in a way that feels comfortable for us. I don't feel like I'm acting or playing a role that isn't actually how I am in my real life.

Is the more electronic direction in your new music that same thing—being older, being more comfortable in your career? SARA: It's all of those things and it's also the realization that if you play it safe, you can sort of incubate yourself in a part of the industry or in a part of the world that feels familiar and where you have a lot of control, however safe you make the world you're in, there's still going to be criticism. So it's like, what feels more satisfying? Does it feel more satisfying to just be yourself and risk it all and have people critique you, or does it feel better to keep yourself in a really safe space where you control all the variables and you know what kind of audience you're going to have and how they are going to respond to you? For a lot of our career, I felt very comfortable in that world, and now I'm sort of like, "Well, what's the harm in allowing yourself to expand or change, even if it's at the risk of losing people or having people criticize you?"

Last year, you released a live album called Get Along, which was sort of a greatest hits collection, plus a tour documentary and a boxed set of all of your records. Was that closing a chapter of your career? TEGAN: Sara and I definitely describe Get Along as a closing of a chapter. Although we have so many records and we've toured so much and we have all this experience, in a strange way it feels like it just was overnight. There's so much exploration and adventure and growing and learning and so many different eras of music that happened, even outside of us, just in the industry and the world and whatever, it sort of feels like we did a marker, like, "Okay, that's all of that stuff. That part of our career has happened and now moving forward, what are we doing next?" It was very much a hard line where we had to determine how we would inspire ourselves to continue. Where does the evolution go now? Sara talks about this a lot, but a lot of bands call it at 10 years, and we crossed that threshold a few years ago.

Do you think about that a lot? SARA: It's interesting, because I was probably one of the ones that didn't care about doing the DVD. I remember when it got pitched to me, I was like, "Sounds like a lot of work. We are in the middle of a tour." I'm definitely someone who is a little bit more hesitant about doing things unnecessarily. I have a more methodical approach to it, and I didn't really think about marking anything or…It was very strange. I think I was more significantly influenced by turning 30 and the ceremony of, "Okay, now I'm in a different decade in my life." And I think I've always struggled more with the idea that we are being held to a certain type of sound, or certain type of style and any sort of moment that I can shift. Even though it may be substantially alarming to our audience, I'll be the one that's much more like, "Who cares, they'll trust us! Let's move into this next thing!" So the DVD, I didn't have as much desire to end the decade or close a chapter of our life. A lot of the press around the DVD, it almost felt like it was more appealing to our fans and to the press to be able to say those things, because for me, I was already well moved on. 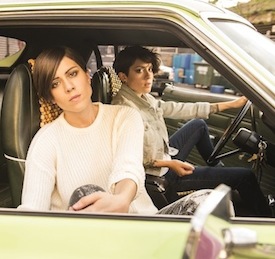 You've both lived on opposite coasts for a long time. Even your hair today is parted in opposite directions… TEGAN: Sara's hair is quite versatile. So she parts it on different sides sometimes. So she can change it. Whereas my hair cannot be parted on either side. It's cut completely so that it can only be parted to one side. It almost hurts when I put my hair the other way. SARA: But I don't think that has anything to do with east coast, west coast. I think my hair works on both coasts.

Do your respective coasts reflect your personalities? TEGAN: When we were getting started, the west coast seemed less threatening. It was really natural to move out to the west coast. Our family lives there. In our minds we would have never moved to New York or LA. It seemed really overwhelming even on our first trip to Toronto. I remember landing there and it was night time and taking a cab and waking up and looking over the lake and the city and feeling really overwhelmed. So I think it was natural we moved west. But when Sara moved to Montreal, it made a lot of sense. The music scene, the cultural scene, the fact that she didn't know anyone that was there. Most people get out of high school and they go to college, they explore their independence and their individuality. Sara and I chose to be in a band. We had to almost have forced time apart, because we were going to be spending three quarters of our time together. As I get older, it more has to do with how my family is all on the west coast and it feels weird to be far apart from them. And there's some monetary factors. I mean New York is amazing but it's fucking expensive. Maybe it's getting older, but where do I put all my records? You inevitably get to your thirties and start thinking about family. But I think it's been really great for our band. I mean Sara is just immersed in a completely different game out here. When she first moved to New York, talking about theater and the art scene and all the musicians she met and I'm like "Mom and I went to a Walmart yesterday." That's an exaggeration, but Sara was immersed in a whole different lifestyle. Same thing in Montreal. She was learning French and going to all these cool restaurants and seeing all these bands. She was like "Have you ever heard of Gossip and Arcade Fire?" and we were all like in the van from the west coast being like, "Who?" It was good for us. It kept us current. Cause I have a natural instinct to just be like, "I don't want anything around me. I don't want to create blogs or any of that stuff." I think we are yin and yang. We really balance ourselves that way. Do you agree with that? SARA: Yeah.