There’s something about spending a majority of your days in the back of a tour van that makes for precise packing. If you’ve only got room in your suitcase for the essentials, you’d better figure out what works for you. We asked eight of our favorite artists how they found the indispensable items that make their style pop, whether at home or on the road.
Matt Korvette of Pissed Jeans

My Carol Christian Poell Tornado zip boots have proved indispensable. I’ve essentially given up on wearing anything other than these boots on my feet, as they are both comfortable and versatile. They’ve worked for business casual as well as goth-ninja cosplay. I’ll play a disgusting show at night and wear them to work the next day. It took a while to find these in my size, but they are a fine example of Poell’s ability to hide crafty details within a simple exterior. The heavy-duty zip extends from the ball of the foot up through the Achilles, and the tanning barrel-dyed leather is impenetrable. They are made to survive raw conditions and come out looking all the better for it.

I started wearing weaves [once I began] performing more and wanted a more original look. [My first weave was] fucking awful. I didn’t know what I was doing, I let these women from uptown glue this awful shit all over my head. Now I go to Clynn Hercules in Flatbush, who always hooks me up. I [want a weave that’s] either going to be the most natural-looking or the complete opposite—pretty flamboyant. I change the way I look almost every two weeks. I’m a chameleon, which is hard
because people still want “Mykki Blanco” to look a certain way. I’ve learned to say, Fuck you. I’m gonna look how I want.

Gavin Russom of The Crystal Ark

When I first thought about what I wanted The Crystal Ark to look like, I had this vision which fused The Source Family with the Sun Ra Arkestra. I wanted us to look like a gang or an army, too. Late at night, while on tour in Mexico, I caught a » TV documentary about a Catholic-inflected ayahuasca cult in the Amazon. What really grabbed me was the outfits the members wore in their ceremonies. The look was sharp, serious, spiritual, out there, and they looked beautiful, like star children. I realized that the ideas I had about our look basically added up to a simple phrase: cult members. After some deep internet searching for info on the group, I found one picture that led me to the source: [the spiritual practice] Santo Daime. Originally, I was drawn to the women’s outfits, but what would become the band’s signature look for the first wave of Crystal Ark and Party Machine shows, as well as the “We Came To” video, was an updated and New York-infused version of the men’s outfits, courtesy of designer Martin Keehn, a friend and collaborator of [my bandmate] Viva’s for many years. 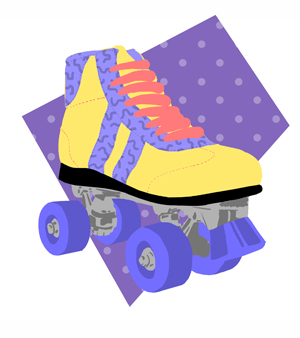 When I was a kid, I had some knackered old skates that got handed down to me from my big sister. Recently, I was looking for a new pair, and the ones I picked out reminded me of them. All the new models looked so serious—all hard and plastic. Mine are just like blue and yellow trainers on wheels, so they don’t mess with my style. I’m pretty nostalgic about all things vintage—I’m obsessed with records on vinyl and ancient cars. I had to sell my 1970s Mini Cooper a year or so ago when it kept breaking down, which is when I decided to be more active, so I skate to get to friends’ houses nearby, or just for fun. I live near an amazing park, so I go there on weekends sometimes to get some exercise when it’s sunny. 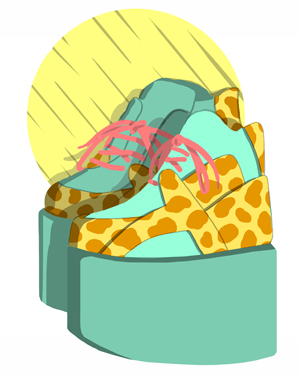 I am totally obsessed with Buffalo platform shoes. I literally always wear them. I was obsessed with the Spice Girls when I was younger, and as I got older that fascination never faded, so I guess wearing the same shoes that they wore is kind of just me being a total fangirl and paying homage to them. I went to Geri Halliwell’s house once and wore a pair, and she totally freaked out. It was super cute; I felt like a proper girly girl talking about shoes and stuff. It was like a scene from Clueless. At the moment I have six pairs: one zebra-print pair, two black pairs, one midnight blue glittery pair, one pink-and-leopard-print pair and ones that are black flip-flop platforms. I always perform in them ’cause they make me fucking tall, and whenever I put a pair on, I turn into the ultimate super girl. 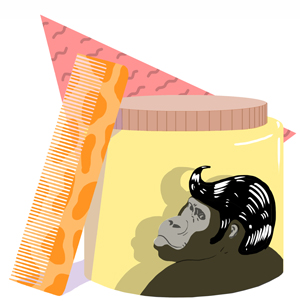 Throughout most of my teens I rocked a fade, the haircut of choice for teenage Latinos in Chicago. Wesley Crusher from Star Trek inspired me to grow out the top. [I started styling my hair] with Moco De Gorila a year ago. It’s from Mexico, and the name translates to “Gorilla Snot.” It’s cheap, smells good and is strong as shit. I fuck
with the graphic design too. I buy it at this cheap-ass Dominican bargain store for three dollars. [With a good pomade] there should be less maintenance, not more, the next morning. The ultimate hair pomade should be shiny enough to act as a spare mirror for my friends in the club, with absolutely no flaking. 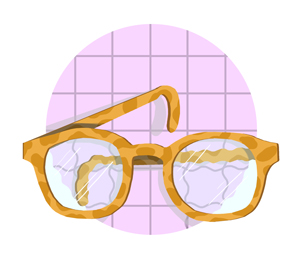 I’ve been wearing glasses my whole life, because I really don’t like contacts. I can’t even do eyedrops. I’ve been wearing glasses since I was eight years old, but when it came to buying my own, I wanted something different. I got the clear circle ones in South Carolina. I still wear those. I have some more rectangular ones, too, but they always take up a little too much space of my face. Yep, I’m pretty sure I’m just going to stick with these. Now I live in LA and there are more options, but I’m not really one to go glasses shopping. I just got my first pair of prescription sunglasses, though. That’s a big deal for me. 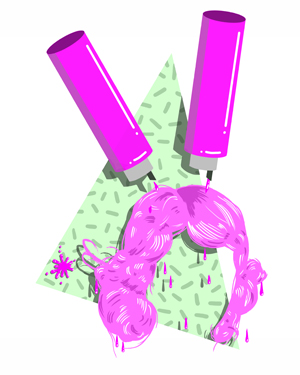 I was just bored one day and decided to dye my hair. I mess around dyeing and cutting my friends’ hair a lot, so I usually have that kind of stuff lying around the house. I decided to dye it pink because it was the color I had the most of left over. My hair was already bleached out, so it was easy for the color to take. I use Special Effects hair dye because it lasts longer and I don’t really wash my hair that often because it fades really fast. [My boyfriend and bandmate] Derek helps me apply it, but I kind of have to beg him to do it. Our bathroom is a mess—pink stains everywhere.