The creative collaboration began with Melgaard providing the designers with written prompts describing imaginary individuals for whom they'd create a signature piece of clothing—drug addicts, sex enthusiasts, high functioning sociopaths and other miscreants springing from Melgaard’s overactive mind. “They're really sad archetypes of people," says Eckhaus. "Some of them are direct alter egos—one piece is the result of if a coyote were to mate with Bjarne.” Regular studio visits with Melgaard helped Eckhaus and Latta grasp how the clothes, essentially exoskeletons for these hypothetical beings to live in, would fit into the larger artworks. “What the clothes looked like as we were making them, as opposed to the environments that he was creating for them, inspired this ever-evolving dialogue, says Eckhaus. "We would go back to the clothes with new ideas. That call-and-response was just as valuable as any of the character descriptions.” 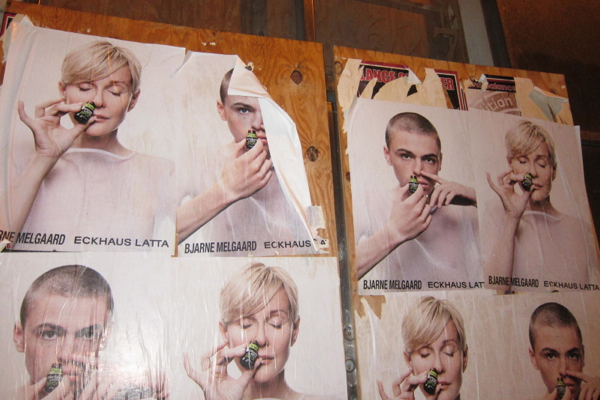 Above: Promotionial poster for the Eckhaus Latta sex kits


Throughout the exhibition, the original descriptive texts are haphazardly taped next to the finished garments they gave birth to, cementing the DIY and slightly IDGAF manner that continues to inform Melgaard's art. Each of the six, one-of-a-kind garments hangs below a colorful and densely painted, expressionistic face, adorned with found imagery, drawings and recurring images from Melgaard's work, such as the miniature pink panther. Made from the same materials seen on the Eckhaus Latta runway—brushed nylon, knits, and translucent plastic—the clothes look like they're ready to be worn by a living, breathing human being, but Latta was quick to point out that some garments took "two weeks to hand knit" and "feel horrible on." "We usually design for how something looks on the body, but in a fine art context it’s about the hangerability," says Eckhaus. "It was really nice to make a collection of clothes that didn’t have to be worn or be reproduced. We didn’t really have to deal with anything besides fulfilling all of our aesthetic desires.”


“We didn’t really have to deal with anything besides fulfilling all of our aesthetic desires.”

Instead of contributing to a catalogue in the way of traditional merchandizing for an exhibition, Eckhause and Latta, along with longtime friend Eric Wrenn, made Liquid Cosmetics, a series of limited edition sex kits branded as Bjarne Melgaard + Eckhaus Latta SPORT. Each Liquid Cosmetics kit contains poppers, lube, condoms and a washcloth. “The poppers were something we had been thinking about for a while," says Eckhaus. "The context was so much better working with Bjarne than if we were to just hand out poppers at a fashion show." Some might disagree, but for now, you can purchase the sex kits at the gallery or at the very least, see them being used in the ads that were put up guerilla-style all over lower Manhattan. “We’re into cosmetics in the way that perfume extends as the bread and butter of fashion companies," says Latta. "For us, that kind of product placement and that subverting of what that product is, is really exciting. But we like making things that are harder to digest.”

“Fine art is so much more chill than fashion," says Latta. "We spent a day with six art handlers trying to hang a poster who all have Master's degrees.” Both Eckhaus and Latta agree that Eckhaus Latta, the brand, is about acknowledging this type of diversity in their work. "Our background is in fine arts, but we never segregate ourselves. Bjarne was so open to trusting us. He gave us a starting point and said, "Do what you want. It was working with no restraints.”

Bjarne Melgaard: Ignorant Transparencies will be on display at Gavin Brown’s enterprise through October 26th, 2013.