This past week, the Brooklyn Electronic Music Festival celebrated its sixth year in the borough. Masterminded by NYC production company MeanRed, BEMF takes place over a long weekend, and is spread out across several spots in Williamsburg, including Cameo Gallery, Music Hall of Williamsburg, Glasslands, 285 Kent and Brooklyn Bowl, with the addition this year of some recent arrivals to the neighborhood (Villain and Output). Since starting in 2008, the festival has featured a rotating cast of electronic musicians from varying schools, scenes, and styles, including legacy house artists, emerging post-dubstep weirdos, synthesizer psychedelics, and next-wave hip-hop producers. It’s an easy point of entry for newer fans of the city’s dance scene, juxtaposing old masters and up-and-comers in an easy-to-find format. It also, for this reason, lacks a bit of the mystery or gritty charm of a proper Brooklyn warehouse rave or underground show, particularly since this year’s line-up was missing key figures from the past few years of brilliant electronic music (there was pretty much zero presence from Lit City, Teklife, Fade to Mind, and Night Slugs, for example). The event had its official start at Output on Thursday, November 7th, with Skreamzin, the official BEMF pre-party.

I was a little antsy for my first trip to Output, a newer dance club on the northern outskirts of Williamsburg known for, among many other things, its larger-than-life soundsystem. The night was billed around mid-aughts dubstep pioneer and general UK luminary Skream, but I was actually very specifically excited for Oneman, a London-based, Rinse FM-affiliated DJ/producer on the bill. I had been intimidated by Output’s upscale reputation up to that point, fearing that I would stick out like a sore thumb once inside, or else not be able to afford the cover, or a single thing to drink. Outside, on line, I got scolded by a bouncer for lighting up a cigarette; later, someone tried to cut me, asserting that they were, I shit you not, "Too important to wait in line.” Inside, though, I got immediately overwhelmed; the sound system at Output is actually nuts. Logistically speaking, it’s an overload of subwoofers for the size of the room, but once I started soaking it in, it became hard to think, converse, or take note of much of anything other than how my body was fusing into the air around me.

I made my way through the different rooms of the venue, finding that no one was really interested in talking to me, aside from occasional questions like “Do you have anything for sale?” “Do you know where molly went?” “What do you have?” I mostly responded with “I don’t do drugs,” which was largely met with disappointed faces, sarcastic high fives, or pissed-off call-outs. Luckily, the Oneman set was as rewarding as I had anticipated. It was risky, weird, approachable yet aggressive, a keen survey of newer dance music aesthetics amongst a BEMF schedule that, particularly in comparison to last year’s, was much older and more traditional in scope (for example, Marc Kirchen was up next that night. and John Digweed was headlining Output the next night). People seemed a little taken aback by his set’s stylistic variety for whatever reason (one patron remarked later on during a visit to the rooftop cig zone that he “wished he had stuck with one thing and just done it—like, he doesn’t know if he wants to be hip-hop, or house, or what”), but the overall arch was smart and subtle. There was a Denzel Curry vocal sample, snippets of recognizable trax for the crowd around (including a well-placed spot for Lil’ Durk’s “Dis AIn’t What U Want” and a clever cut-up of Rihanna singing “Diamonds (In The Sky)” over Cybertron-esque techno breaks and some Baltimore club-style drum work. The pacing lent itself to the crowd’s probable tastes without pandering or condescending to them, and once they were won over, he was able to get weirder. 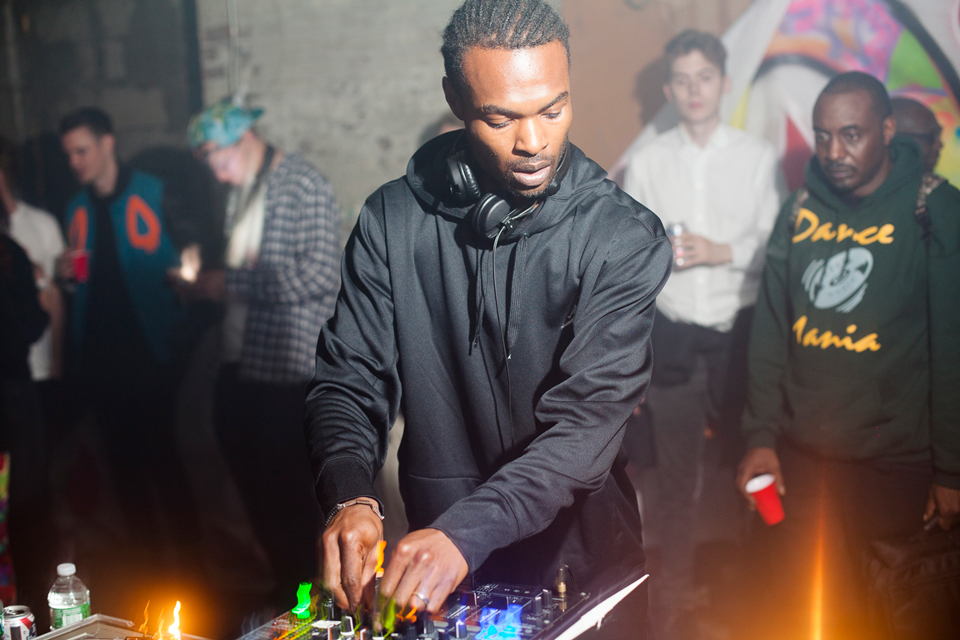 
Regardless of what my young ass has to say, any old dance curmudgeon will tell you that Marc Kirchen, aka MK, is a legend. He was up next after Oneman, and though I didn’t really know who he was past Wikipedia’ing his Billboard chartings, I felt like it would be wrong to pass him up. The set, to a naked-eared first-timer such as myself, was basically house remixes of pop hits. It was tame, it was successful, it was tastefully restrained, but something felt off and soft. Some of my friends had shown up by this point and they reminded me that this is how he got famous in the first place. Perhaps this is my youthful ignorance speaking, but MK’s set also seemed to speak to how special Oneman’s set was in the midst of plays like this. I couldn’t have felt more alienated at this point, and so, though MK hadn’t finished and Skream was next, I left hoping this would only feel like a strange detour into commercially safe blandness once the rest of the festival had passed.

For the rest of my time at BEMF, I decided to navigate the fest’s approximately 80-artist line-up by just focusing in on the music I was already itching to see. Hence, Friday night was much more relaxed for me, despite requiring that I be much more mobile. The sets I wanted to catch were interwoven between Music Hall of Williamsburg’s LuckyMe showcase and 285 Kent’s Bunker Stage. They were basically stacked back-to-back, requiring I keep the eight-block jaunt between the two spots to a brisk nine minutes (this formula was developed by trial and error).

I eased into the evening with Bryan Kasenic’s opening set at 285 Kent. Kasenic founded the Bunker party around 20 years ago, and it has remained a staple of the NYC electronic scene to this day, championing minimal techno, live electronics, and the turn-the-lights-out-and-just-listen school of nightlife. In layman’s terms, Bunker was a sonic dinner party for people whose favorite electronic city is Berlin, regardless of where they actually call home. It made the inclusion of Outer Space, the solo project of John Elliott from now-defunct experimental group Emeralds and the head/founder of Editions Mego imprint Spectrum Spools, seem clever but still somehow strange. Kasenic, perhaps in awareness of this, seemed to tailor his opening set to the fact that Outer Space would come up right after him, and likely would envelop the room with heavy, freeform ambiance. Accompanied by now-core-member Andrew Veres and Adam Miller, Outer Space played a set full of deep, cavernous drones. Fans of last year’s Akashic Record would have felt right at home, though the pacing was noticeably looser, with Elliott playing around with that cool, unpredictably bubbling scratched-glass sound that modular experts seem to make infinite, personal variations of. A long, slow build gave way to a grimey, homebrewed techno jam that offered unexpected catharsis.

Over at the LuckyMe showcase at the Music Hall of Williamsburg, Tri-Angle roster member and UK producer Evian Christ delivered a performance that was a little disturbing, incredibly heavy, and one of the highlights of the festival. I hadn’t had a chance to see him before, but was a huge fan of his free mixtape from last year, Kings and Them. Invisible save for a strobe flickering out of a vast expanse of pitch black, he seemed to construct a sharp-contrast gothic empire out of the skill set of a proficient hip hop DJ. Somehow, he was the one who made me finally greenlight anything by A$AP Ferg past the first four tracks on Trap Lord, mixing in mid-way album cut “Dump Dump” into a mishmash of creeping bass, reverberating snaps and a slow curtain pull. I got my moment of zen with “I’m In It,” his most prominent collaboration with Kanye on Yeezus. Another meaningful appearance of Lil’ Durk’s “Dis Ain’t What U Want” close to that drop foreshadowed my impending conclusion that all the DJs at BEMF were talking to each other about how much they loved both Yeezus and that Lil’ Durk track.

Lunice made the strongest argument for this thesis considering that, when he started up at Music Hall, it was with several cuts from Yeezus in a row, nearly unmixed, getting up in front of the DJ booth play-acting, lip-syncing, and generally getting hyped as all hell in front of the crowd. They responded in kind, easily. His set had cooler jolts between Chief Keef, Lil’ Wayne, Meek Mill, and Drake before settling into his style of original productions and what I think was some TNGHT material, but his greatest asset was his willingness to break the fourth wall between himself and the crowd. 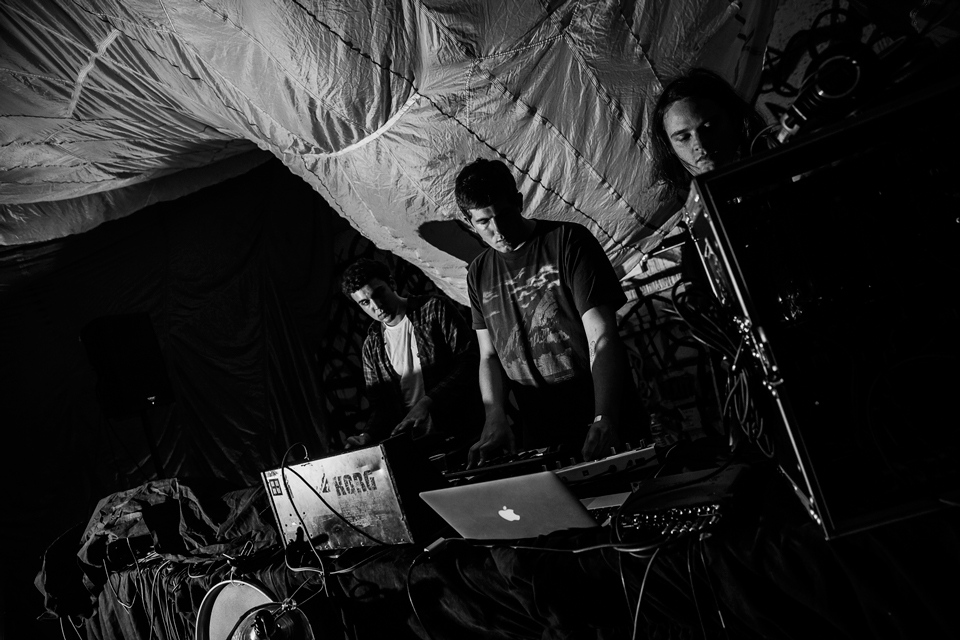 
On Saturday night, I decided to do things a bit differently. Rather than run around catching showcases piecemeal, I was just gonna chill at Glasslands for the Software showcase until Actress came on next door at 285 Kent. Nice. Software Recording Co. is the label founded by Oneohtrix Point Never’s Daniel Lopatin as a Mexican Summer imprint. With its releases from Huerco S., Pete Swanson, Slava and OPN himself, the label had really come into its own since its 2011 launch, making a strong case for left-field electronic music that revives the album as a format for mood-setting and storytelling in a climate where most similar-sounding artists are encouraged to make dance singles. First up was David Kanaga, whose soundtrack for the computer game DYAD was recently released on Software. He put his hood over his head and a frog mask over his face, tweaking knobs to create what sounded like a mix between DJ Clap’s hyper-obsessive melodic sample warping and G. Lucas Crane’s weirdo magnetic tape mangling, somehow equally overjoyed and depressed. I was super into it but my heart felt wrapped up in severe palpitations. Everyone in the audience looked freaked out but charmed.

Kanaga's set was actually pretty reminiscent of some of the crazier, noisier transitions on Returnal, a record Oneohtrix Point Never released shortly before launching Software. By comparison, the set that OPN played after Kanaga’s seemed to reach even further back into Lopatin’s discography, teasing the title track from Russian Mind and making heavy use of the style of intricate synthetic arpeggiating that marked old highlights like “Betrayed in the Octagon.” There are few artists around right now that so easily mesh intuition and concept; OPN is a sort of generational godfather and role model for people that want to think big without sacrificing sensuality. It he’s ever playing near you, just go to it.

I was finally rested and prepared for my final BEMF voyage. UK producer Darren Cunningham, aka Actress, was next door at 285 Kent, and considering his regular visa issues (as well as a recent declaration that the next Actress record will likely be the project’s conclusion), this was potentially his last NYC play ever. Despite my personal feelings about his music—which are extreme and quite positive, but hardly geared toward enjoyment in public—I had to do this. Inside, it felt like a spell was being cast: maddening snippets of beauty were filtered through heavy effects, flangers waving at you like knife-sharp tsunamis, thoughts stifled and stillborn by deep, crackling grooves. It was heavy-- I started compulsively drinking, saw someone I hadn’t seen in two years out of nowhere, felt like I couldn’t understand what anyone was saying anymore. The night ended with me saying nothing to my friends and just turning and running out the door to hail a cab to as far away as possible.