Like many songs by the cherubic Japanese pop star Kyary Pamyu Pamyu, her recent single “Mottai Night Land” was written for a TV commercial. Debuting a snippet of the track in a spot promoting a mobile phone company called au, Kyary first appears as herself, chatting in a dressing room until she’s attacked by a group of ghosts with oddly well-articulated butt cheeks. When a conservatively dressed businesswoman opens the door to investigate, we see that Kyary, wearing a knee-length white princess dress and frilly socks, has charmed the ghouls into a choreographed dance routine, the once-staid dressing room transformed to a pink-and-purple forest by her girlish voice and the high notes of a xylophone. On the cover art for the single, Kyary’s first release since her number one-selling (in Japan) 2013 sophomore album, Nanda Collection, she pulls off an even more bizarre look: next to an austere arrangement of grapes and carrots, she sits in a plump pink one-piece, sporting an enormous tan afro and curly beard that covers most of her pale, 20-year-old face, adorned in simple costume makeup to look like a puppy. Kyary is the strangest pop star on the planet.

Starting with her 2011 debut single, “PonPonPon,” an irrepressibly happy song with a hyper-pastel music video that’s now approaching 60 million views on YouTube, Kyary’s music has been exclusively written and composed by Yasutaka Nakata, the Tokyo 33-year-old who also single-handedly produces the dance-pop girl-group Perfume and his decade-spanning, genre-shifting project CAPSULE. Across these three main endeavors, Nakata has carved out a distinct sound within pop music in Japan and across the globe—he stacks songs heavy with innumerable synthetic instruments, everything pitched high and mastered loud, for a cumulative effect that feels something like aggressively zooming in on a sparkling smile. His sonic palette for Kyary is by far the most unusual, though, utilizing toy kazoos and tubas to emphasize not just the cheery naiveté expressed by her childlike appearance and every-day-is-Halloween wardrobe, but a certain grotesqueness that comes with it all. Like munching an entire box of jelly beans in one sitting, Kyary’s look and sound are so sweet they make you feel a little sick. 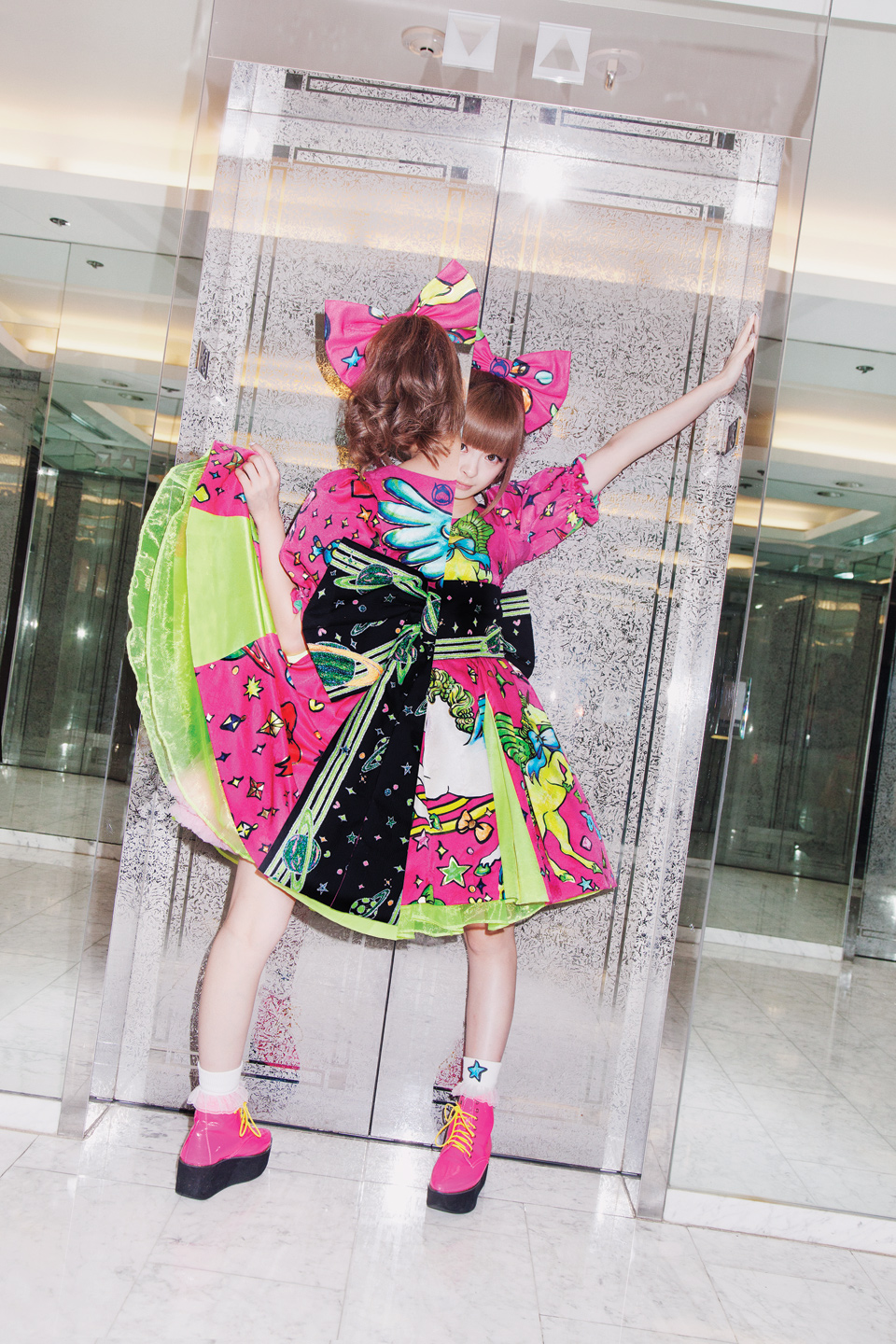 Nakata may be the virtuoso—“Nakata-san is in control of everything from lyrics to making tracks,” Kyary told us—but like all great pop stars, there is something essential yet intangible about her contribution to the music and how it’s presented. In an interview published in Kyary’s 2011 book, Oh! My God!! Harajuku Girl, Nakata acknowledges the way she activates creativity in those around her, saying, “Everyone who gathers around Kyary feels like, ‘If I were with Kyary, I’d be able to express things that are new to me.’ That is, of course, how I feel too.” She’s like the producer behind the producers. With her surreal style, born out of Tokyo’s cutting-edge Harajuku fashion district over which she now reigns, Kyary motivates you to take risks. Just as important, the pretty oddities about her—the bunny-hopping dances and not-quite-perfect voice—make Kyary easily relatable and supremely memorable. In Kyary, accessibility and experimentation combine so that she herself comes to represent pure potential, as though through her, any unusual idea—like the male foxes with vinyl pink bras that appear in her video for “Tsukematsukeru”—might find a major audience.

Brands like the aforementioned cell phone company have latched onto the same quality, and Kyary has become ubiquitous in Japanese advertising, appearing in spots for Adidas, Coca-Cola, Kentucky Fried Chicken, Panasonic, Suzuki, confectioners and countless others. Not unlike Nakata, these companies use the beguiling singer as a cute and cool prism through which to project themselves. By embracing her stranger side, they’ve made some truly weird, eye-catching ads, like the “Fashion Monster” series she did for the clothing store g.u., in which Kyary appears biting necks and sporting a foot-tall hairstyle, coiffed to look like a flying vampire bat. With Kyary—and with more and more artists these days, as her model of music-making via marketing proves successful—her body of work extends beyond singles and albums to include photo shoots, promo spots and a public persona. Impressively, rather than being emptied out by her ceaseless product-hawking, Kyary’s brand has become even stronger. It makes sense: for the queen of exaggerating sweetness and smiles until they become ugly, what could be more perfect than to make the act of selling part of her art?

In the following interview—conducted in Japanese at the Tokyo offices of her management company, then translated—Kyary discusses her unique appeal to advertisers, learning English (or not) and planning her next world tour. 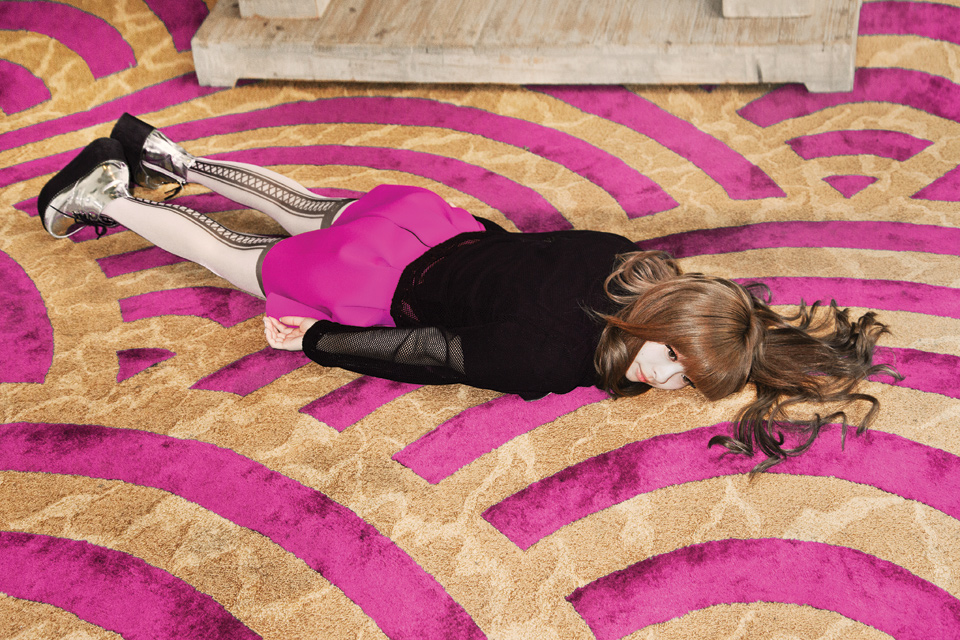 Your face is everywhere in Japan these days. How does it feel to see yourself in commercials and on posters? I’ve always wondered what celebrities would think about that, but when it finally occurred to me, I was just like, “Ah well, it’s me!” That’s really it. Not long ago, I was eating ramen and I heard my song “Invader Invader” playing from the speaker. I was surprised for a second, but that was it. It just feels a bit awkward now.

What has changed since you’ve become famous? People have started to talk to me on the street. Especially when I’m in a new television commercial, everyone in the city, including people who are not my fans, stop me to say, “I saw it!” It feels very fresh; it makes me feel funny. It happens sometimes in foreign countries as well. When I was walking in LA and New York, some people just went, “Agh!” It felt like a total coincidence, but they said things like, “We were watching YouTube and my daughter loves you! Can I take a photo with you?”

How do you decide which advertising jobs to take? My management talks me through the offers they receive. A lot of the times they choose jobs for me, but I still give opinions about what I want to do with them. For example, advertisers will say, “Okay, this time we go for a mature-themed Kyary.” Well, I already have an image, and it’s not “mature-themed.” So I will then have a discussion to make it work. I especially give ideas for costumes. 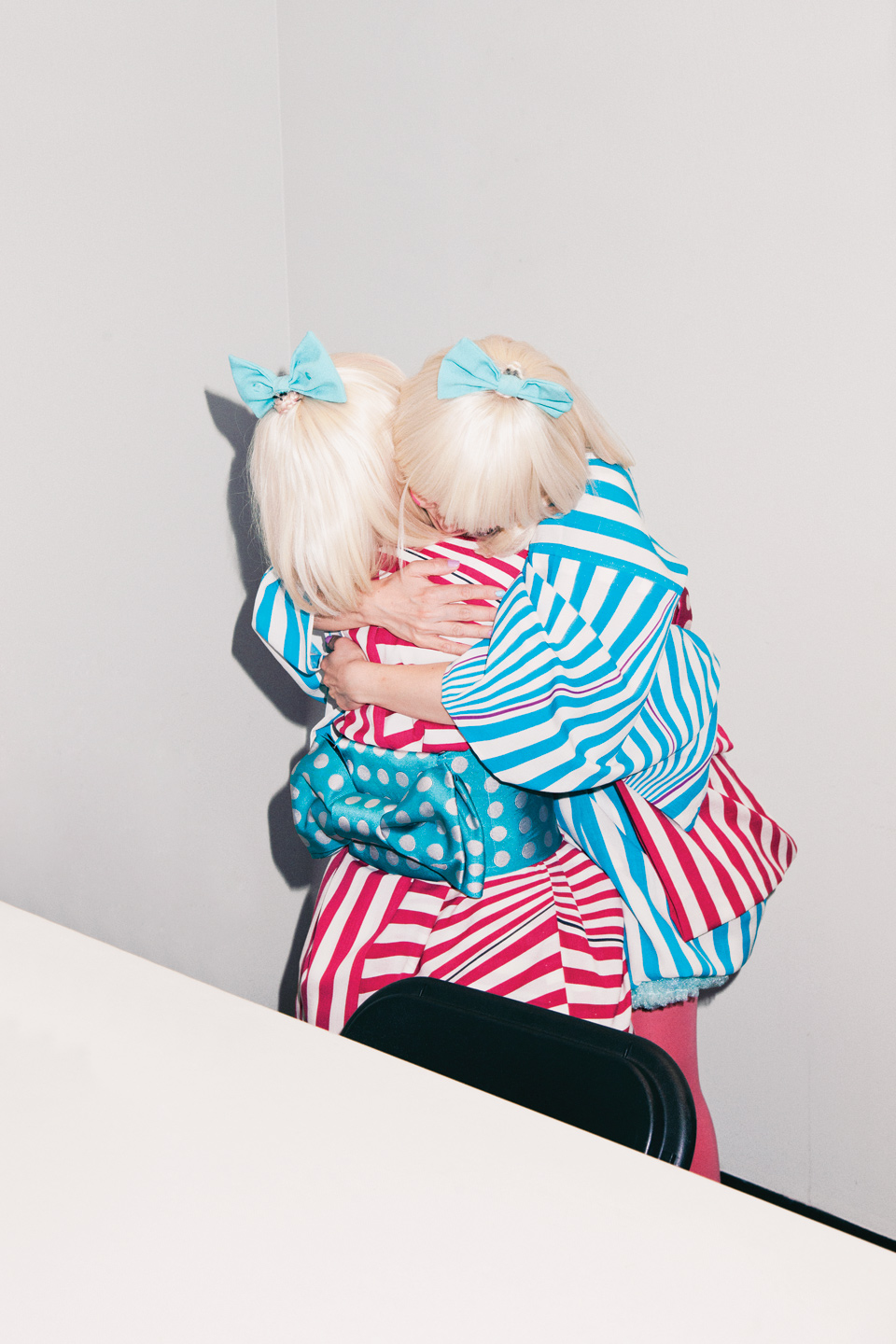 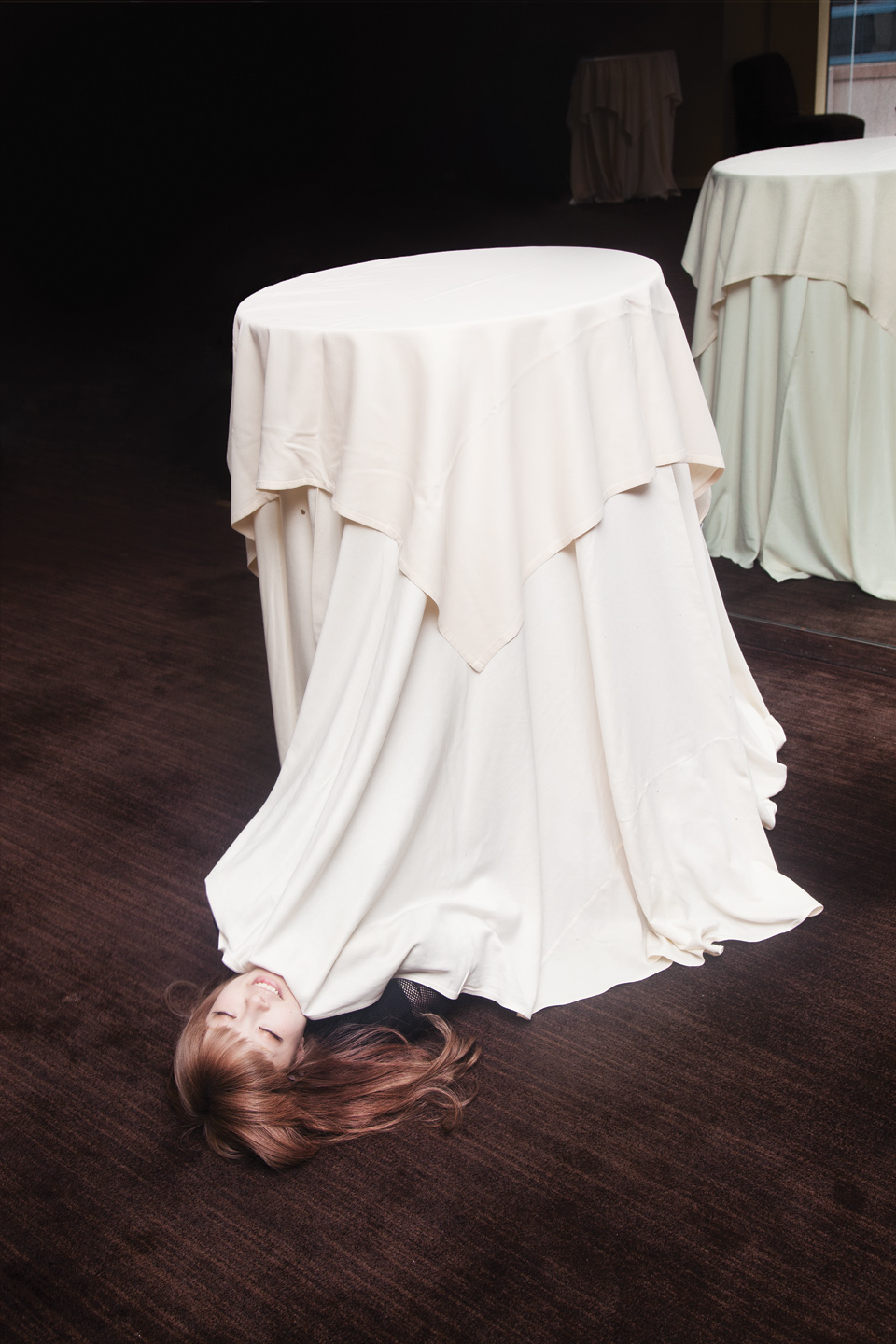 Why do you think so many brands want to work with you? I’m not sure if I should say this, but I think it’s because of Kyary’s nature as a character. On television commercials, I can appear as any character that advertisers want to make. I think that’s why I’m useful—or, rather, easy to work with. Recently, I did a television commercial for a toothbrush, and I’m holding a gigantic toothbrush and fighting with germs. Kyary can also do those anime-type things.

What’s your fan base like? At the beginning, since I started off modeling for fashion magazines, there used to be more girl fans. After being on some television shows and stuff, my fan base changed. If you were waiting in the line for the concert, you’d go, “What kind of group is this?” From young kids and salarymen to ojisan [middle-aged men] who seem like huge fans of aidoru [young, female idols], it’s diverse beyond generations.

How do your fans interact with you? Some start crying just talking with me, and some of them speak to me frankly like we’re friends. It depends.

And how do you interact with them? Recently, I wanted to do something with members of my fan club, K.P.P. Club. Since many of my fans have families with young kids, I thought grape-picking would be perfect. Near the end of August, I went to Tokyo, Nagoya and Osaka with a few hundred members. I also made time at a party hall for members to ask me questions and take group photographs. You know, doing things you can do for a fan club.

Songs on Nanda Collection like “Ninja Re Bang Bang” and “Furisodeshon” [a furisode is a formal kimono for unmarried women] directly reference traditional Japanese culture. What do you think is cool about Japan? I love old Japanese history very much. I recently visited Nikko Edo Mura [a theme park that recreates life during the Edo period]. There was a prisoner’s room with decapitated heads that displayed how criminals were treated and tortured. It was shocking to know that when you got caught by police and arrested, they’d give you a tattoo right on your forehead—it’s permanent. I think it’s shameful, and I wondered why they did something so useless. But I really think traditional Japanese things like samurai, ninja and oiran [the highest class of prostitutes] are very cool. 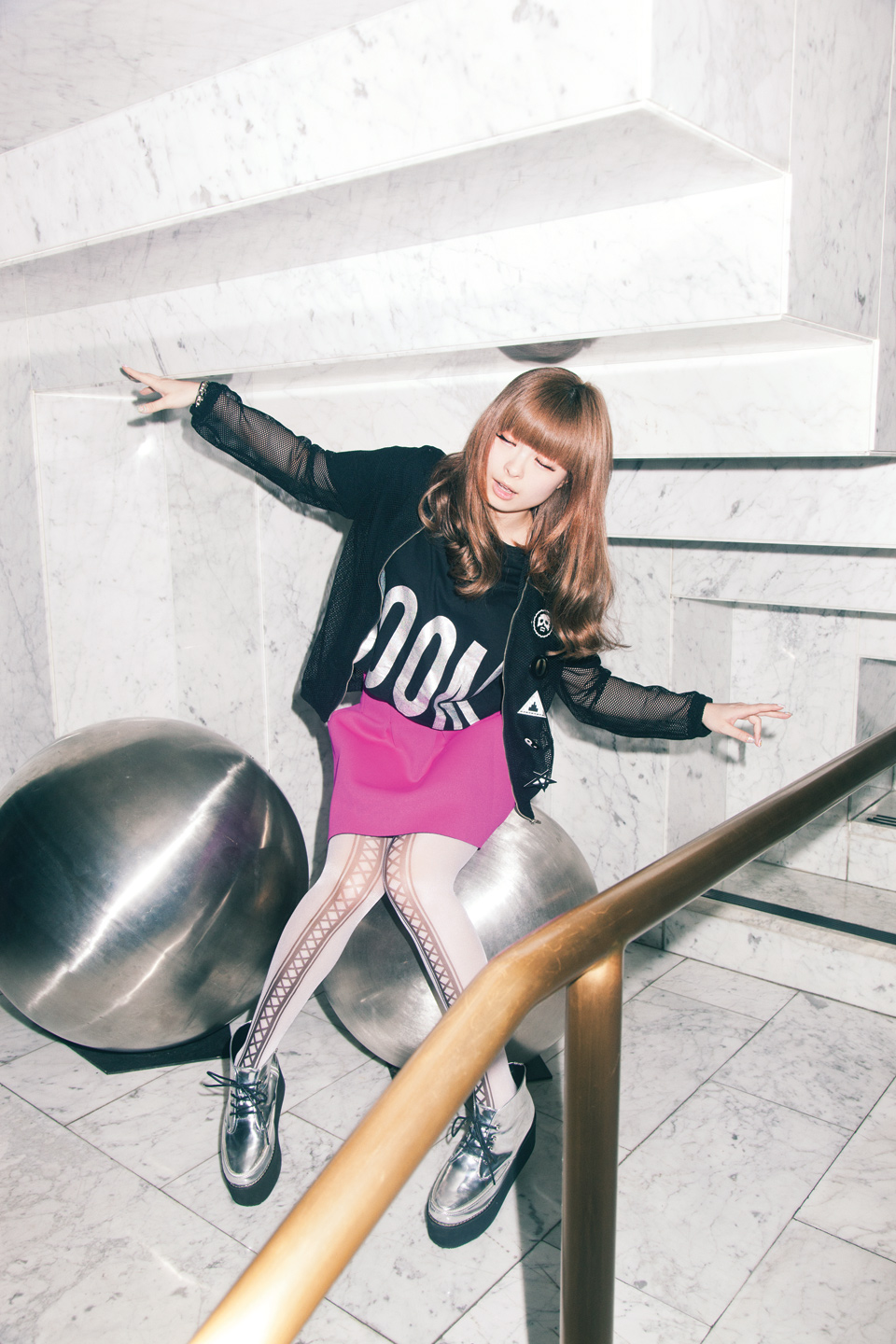 For many people, futuristic technology is what’s interesting about Japan, but for you, it’s something of the past. Yeah, I think traditional things are totally way cooler. Actually, I don’t really believe in history. I like those things, but I have a doubt if they really existed. You know ohaguro [an old Japanese custom to dye one’s teeth black]? There are so many things that totally don’t make sense! Black teeth!?

How do you prepare for concerts outside of Japan? This year will be my second world tour. Last time, I felt frustrated because we couldn’t bring the Japanese stage set, and it made me insecure because I didn’t want the audience to think I am better in music videos. I give my whole body and soul into making music videos, and I want people to see and enjoy that world in person, too. But I loved receiving messages in English on Twitter. That made me happy.

Do you think it’s necessary to learn English to expand globally? I absolutely believe so, but I’ve never been good at English. At first I wasn’t thinking about going global at all, but then my music spread out through YouTube and word-of-mouth, which made me very happy. I started to feel like I needed to learn English, but it’s difficult! I didn’t study seriously in school. I don’t mind singing in English at all, but I have a bad accent. Rather than making bad English songs, I want to try harder as a girl from Japan. At my overseas concerts, I still talk in Japanese though.

Like between the songs? Almost all in Japanese. I say “Hello” and “Thank you,” but that’s about it. First I had an interpreter on stage, but it didn’t work as smoothly as we hoped, so we’re sticking with Japanese. If I make hand gestures like, “Isn’t it hot today?” and fan my face, they understand. And the audiences have learned Japanese and studied a little bit in advance of the show. It’s the other way around: my fans overseas study more than me!

When do you feel happiest? For now, it’s when I win approval. 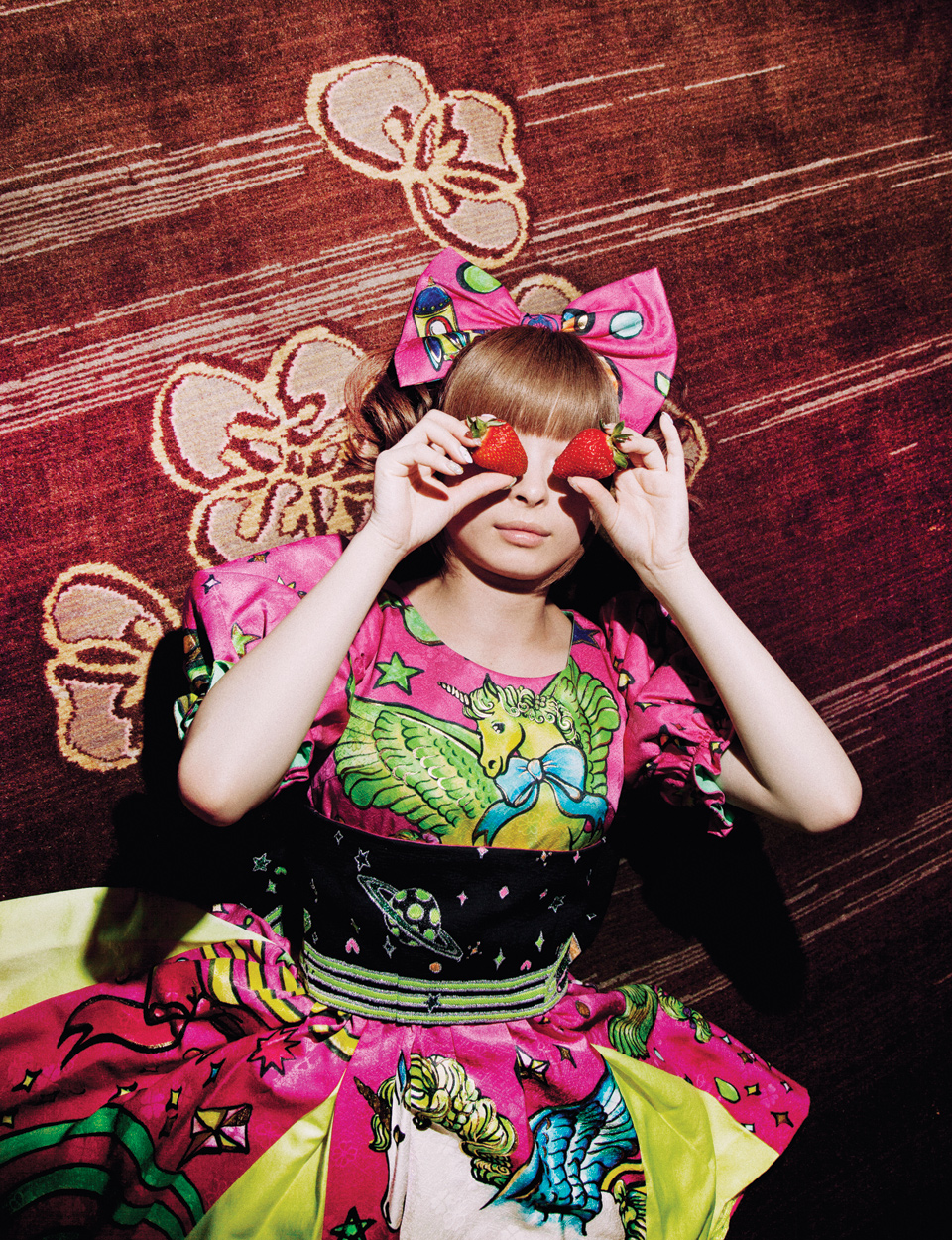 What about before? I didn’t get the right recognition before. I tended to get a bad reputation. I debuted with a strange name and weird fashion, singing songs that didn’t make sense, and people disliked me. It was really frustrating. I thought people were tacky if they didn’t get how good I was. If it’s good, you don’t have to understand it! But lately, those who once hated me have started to get into my style. It has changed a lot over the last two years. I used to be a bizarre girl, but now they tell me I’m kawaii [cute] and hip.

What changed? If you just see my music videos, you think I’m some kind of a weirdo, but once I start talking, I’m quite normal. I have two feet on the ground, so when I appear on television and speak, my likability increases, like, “Ah, she’s actually grounded!” You realize I’m a person with a strong will and that I’ve been doing things with clear meanings. People used to think I was a puppet on a string, a character created by some adults, and that I was just following what they told me to do. But interviews have shown me giving opinions, and when people see that, they think differently. And then they finally decide I’m good.