Why you should still see Jay Z in concert, even if you’ve seen it all before.

Why you should still see Jay Z in concert, even if you've seen it all before

There were the eight shows at Barclay’s in 2012, where he brought out Big Daddy Kane, Memphis Bleek and Beyoncé; for New Year’s, he did a show with Coldplay. And, of course, he and Justin Timberlake had a couple of back-to-back nights at Yankee Stadium this summer, echoing what he and Eminem had done in 2010. For the Watch the Throne tour, he and Kanye sold out New Jersey’s IZOD Center twice, and then MSG, and then MSG again. Plus the two charity balls at Carnegie Hall, an All Points West performance in the mud, a September 11th benefit, a Summer Jam, the three he did with Mary J Blige, and that’s not even counting the time he repeated “Picasso Baby” for six hours straight. (There may be more shows—that’s just off the top of my head.)

All of which is to say: with Jay Z doing two nights in Brooklyn this weekend, there are those who think they’ve seen it before. They probably have. Even Jay Z acknowledged it, saying "Y'all know how we do. Y'all been to this concert before” right before he split the room down the middle for “Jigga What, Jigga Who?” He still urges “What’s the name of this song?” as the “Can I Live?” flourish comes in and raps about people he sees in the audience, a move Drake and others stole. (Last night, Jay said, “Wassup, iPad man?” and made special mention of his mother, seated in the fifth row.) There's so much good TV to DVR on Sunday nights, why would anyone go to see Jay Z, again?

Because it’s great. Because it somehow still feels special when he screams “Feels good to be home!” even though he’s barely left, ever. (The man sold out 25 solo arena dates in five-ish years; if he’s not our Billy Joel, no one is.) He seems energized, maybe since Gwyneth made him eat vegan. For two hours, he—and his band, led by Timbaland—dashed through classic hits and hit classics, making “Empire State of Mind” sound good and the good sound great. The real reason to go to a Jay Z concert, though, is to see what he does, hear what he says now that he’s at a point in his life when he’s just having fun.

Like when Jay winks at the banker in the front row for wearing the same Tom Ford jersey as him; or how, when he throws up the Roc, he doesn’t just drop the mic, he kicks it to the side. Seriously. He scribbles with his rap hands, waltzes with the beat to “Can I Live?” Two steps forward, another two back and a shuffle to the side. He imitates Hurricane Chris and Nicki Minaj. His lawyer, seated near the stage, throws up a handful of new two-dollar bills; Jay looks over, puzzled then amused. 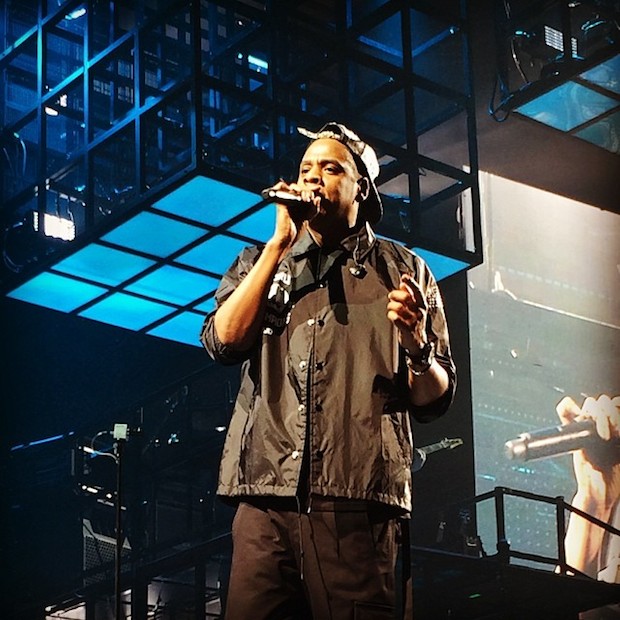 After he finishes “N***as in Paris” once, he saunters, taking a moment to himself, then comes back and says, "Typically when I get to this part of the show, I tell people to stand in the aisles, stand in the seats, go crazy. Around the fourth show, the fire marshall said, ‘You can't do this, we'll fine you.' I said, 'How ironic.' I have a line, What's 50 grand to a motherfucker like me, can you please remind me? You paid for your ticket, you do whatever the fuck y’all wanna do!” He pauses, people cheer. “Tonight’s different, though…because this is my motherfuckin’ building. I do what I want. So, security, stand down. That’s a direct order.” A teenager behind me screams the final line at the guard nearby. No one cares that Jay sold his stake in the building a few months ago. Hours later, I still don’t really care.

Because you can’t help but feel good throughout: he’s preaching hope, reassuring everyone of their “genius abilities” and shouting out Bed-Stuy, Brownsville, Crown Heights and “Flatbush massive”…twice. He’s saying, “Of course Timbaland is in the motherfucking building!” and smiling, the pair's bad days behind them. He’s eulogizing Nelson Mandela and kiss-camming a couple, saying “Love is the new gangster.” Weirdly, though, the screens surrounding him project foreboding terror: there’s images of surveillance cameras, X-ray scanners, Matrix-style HTML and Department of Admissions rejection letters, all flipped and run through several Photoshop filters.

He walks offstage—cool, always cool—and heads off to his “official D’usse afterparty” at the Manhattan location of his 40/40, a building he very much still owns. He surrounds himself with DJs from Hot97 and Power 105, CC Sabathia, Meek Mill, Wale and Fabolous; Victoria’s Secret’s Jessica White and Dez Bryant of the Dallas Cowboys. He smiles, he toasts. Brooklyn’s where he’s from, but not where he stays.

On "Dirt Off Your Shoulder," Jay Z usually raps, “As the best rapper alive, ask about me.” Tonight, he search-replaced "alive" to “ever.”