Next week sees the release of Norwegian producer Todd Terje's debut record, humorously titled It's Album Time. But don’t slot him as the nu-disco kid on the block, as over the past decade, Terje has built up a worldwide rep as a DJ via a backcatalog of rapturous dancefloor edits, ranging from Michael Jackson and KC and the Sunshine Band to Roxy Music. We chatted with the globetrotting DJ-turned-solo artist about what catalyzed him to finally drop a full-length, how Annie from Norway changed his musical sensibilities and why he’s stopped DJing.

So what made you finally say, “It’s time to make an album”? The short answer is we found out we were gonna have a baby. I’ve been wanting to do an album for a while, but I always wanted my first album to be extraordinary and to show as much from my musical background as possible. After many years of not doing this album, I decided to limit it down to a musical snapshot instead, something that shows what I’ve been up to just very lately. And having worked on the It’s the Arps EP—which had some very limiting dogmas—I found it much easier to finish the album this way. Anyway, when we found out we only had nine months left of our normal lives, I decided to go to work!

Can you talk about how you discovered dance music in Norway? Were the productions of Erot (Tore Kroknes) and his work on Annie’s “The Greatest Hit” instrumental in your development? My musical background was more classical than jazz—at least, that’s what I was taught. However, I tried reading my big brother's books about jazz theory quite early on. Eventually, we got a PC and it had a program called "a tracker"; it was a very simple one, with only 4 tracks, but it enabled me to layer sounds. It was super-symmetric and mathematical, and lent itself easily to techno music. My early tracks were stupid, way-too-fast, trance-ish stuff, but then later my sister brought home tapes by [Bergen, Sweden producers like] Erot and Bjørn Torske, who were toying around with disco samples. "Filter house" was already around, and I had some current singles from Olav Basoski and Boris Dlugosch, but nothing sounded as playful as these weird, wonderful sounds from Bergen. They taught me to put rhythmical elements off the grid, which makes for a looser groove.

From 2005-2010, you seemed to focus exclusively on releasing disco edits. What drew you to making edits in the first place, and how did breaking down such classic songs help you with your own productions? Doing disco edits was a much faster way of getting a unique catalogue to DJ with. I was playing a lot those days and by doing these edits, it was easier to stand out as nobody else had those versions. I did a few proper remixes too at that time, but making my own tracks was difficult, as I struggled to get a really good idea to start with. I realized later that the initial idea doesn’t have to be too amazing, as the work usually progressed and changed direction quickly. Now I usually start with a simple rhythm and just grab an instrument and start jamming. I also recently stopped DJing, as I wanted to challenge myself more musically. So it’s all live shows from now on. And right after I started preparing for the first live gig, I quickly made some new sketches, so I think it’s going to be an inspiring way for me to work in the future.

Was there a concept behind the album? Not really. I initially wanted it to be conceptual, and I had an idea of doing the album like a fictional horror soundtrack, but time ran out so I had to work on sketches that I had already started. I suppose the only unifying thing is that it was made in a fairly short time. I like working with concepts though; decisions are easier to make then.

Did you approach the album’s flow as being similar to one of your DJ sets, or did you envision it more as a home listening experience? Both, I suppose. Ending with “Inspector Norse” is definitely something I’ve taken from my DJ sets, as I often close with that one. When I DJ the whole night, I usually start with more "interesting" stuff in the beginning and gradually tighten things up. There aren’t that many 4/4 tracks on this album, but the crescendo is similar. And the drop with “Johnny And Mary” also resembles a good night out. I remember this one night in Thessaloniki in Greece many many years ago, where after a couple of hours of playing house and disco, I thought I was putting on a end-of-night ballad, not realizing that’s when the party really started! It was then two more hours of 90bpm AOR slow burners that the Greeks loved, and it made it a pretty special night. 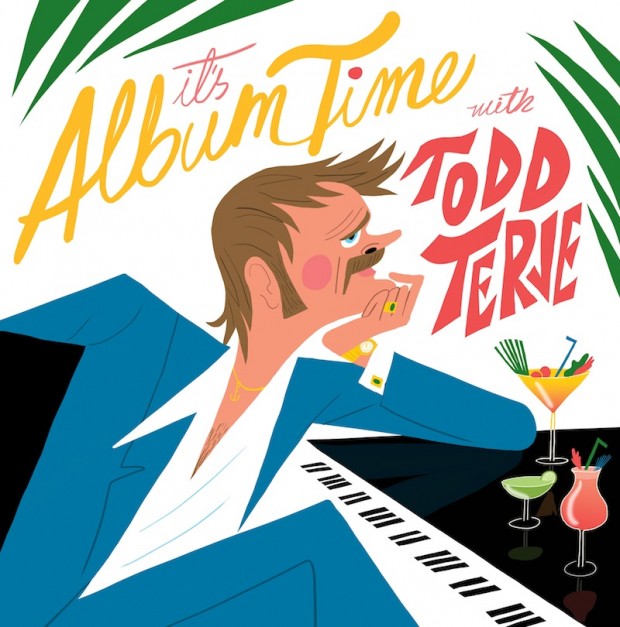 Why did you choose to portray yourself as a lounge singer/ pianist for the cover art? The artist Bendik Kaltenborn and I both grew up with the [adult-themed] video game Leisure Suit Larry. So when we brainstormed titles and came up with "Leisure Suit Preben" (for the 7-inch that accompanied his last book), I guess he continued that thread with the title for my album.

Is there a particular cocktail that would be good to drink while listening to this album? I usually only drink whisky sour, so I guess it has to be that one. Whisky sour!

I have heard people compare the album to everyone from Pat Metheny to YMO to krautrock and Italo. Was there any particular guiding artist or spirit behind the album? Those are all good words in my vocabulary, or my “cred-ulary.” I actually had other sketches that didn’t make it onto the album that were much more Pat Metheny-ish, but that would be a bit embarrassing. Trying to sound like others can be fun, but unless I manage to twist it into something uniquely me, it gets weird. YMO, krautrock and Italo… Sure, I love all of that stuff, but I’m not sure how much is present on this album. I think everyone hears different things. Having heard all this music plenty during the last 15 years of DJing, it can be hard to avoid being colored by that stuff.

By my count, you’ve remixed/edited Bryan Ferry on three separate occasions, so what was it like to finally collaborate on the album? And what made you choose that Robert Palmer song? Usually, I just get sent stems, and the whole thing normally isn’t a very social process. It was fun to finally meet him though, and it was a very musical session we had in his London studio. It was all about having fun and playing as many different takes as possible. He had an idea to do some cover versions of Robert Palmer, so I just started progging it together with their in-house technician. The sketch was done in minutes, but then we went to work with some of these amazing synths, like the Jupiter 8, Prophet 5 and even the EMS Putney, although that one didn’t work properly. Half a year later, I was sent the vocals to the song, which made me change the direction in the song, which then made him sing in a different way, which finally made me do the version that’s on the album.

Is there another cover song on the album? That’s a cover version of Swedish singer Monica Törnell’s song “Svensk Sås,” a wonderful jazz dance classic with that same piano hook. I love Latin percussion and especially the more danceable jazzy stuff from the '60s and '70s, and I always wanted to do a cover version of this track. It turned out a little bit different than I expected to be honest, but that’s what you get when you make something a couple of weeks before album mastering.