Stream How to Dress Well’s “No Words to Say: Songs for What Is This Heart?” Mix

How to Dress Well’s mixes are always some of the best, and his preview for his new album is no exception. Covers, remixes, rarities, gems.

Lot of changes over the years at The FADER, no question. Few things remain, though, no question—How to Dress Well mixes being posted on the blog are one of them, as are various staff members turning to mush at the sound. The fourth track in today's is Everything but the Girl's "Mirrorball," which is annotated in the below tracklist with "thanks to ruth s. for reminding me of this song :)"—that's The FADER's new deputy editor Ruth Saxelby, who played him the track while at her last gig, at Dummy. As William Blake once wrote in his Proverbs of Hell, "Excess of sorrow laughs. Excess of joy weeps." WELL, WILLIAM, WE MIGHT BE ON BOTH RIGHT NOW. How to Dress Well's new album, What Is This Heart?, comes out June 23rd via Weird World, and he'll play a release show at NYC's Slipper Room on June 10th. For more context, read his 2012 feature story.

Stream: How to Dress Well's "No Words to Say: Songs for What Is This Heart?” Mix 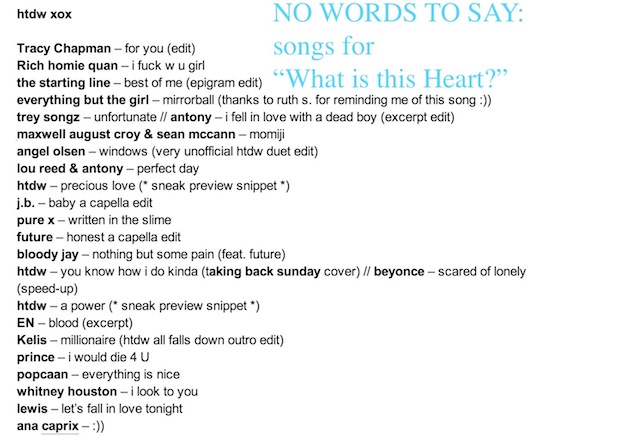 music / News
Stream How to Dress Well’s “No Words to Say: Songs for What Is This Heart?” Mix