The Sky’s The Limit: An Oral History of Jersey Club

DJ Sliink, UNiiQU3, DJ Tameil and more on the rise of the Downtown Newark sound.

There's something going down in Newark, New Jersey. Almost 15 years after it emerged to usurp house music as the heartbeat of the town nicknamed Brick City, Jersey Club—the fast and aggressive dance music that has its roots in Baltimore Club's house and hip-hop fusion—is finally making it big outside state lines. The waves of recognition that producers like DJ Sliink have spurred over the last few years have swelled into something approaching a movement. At the heart of the scene is THREAD, a regular party founded by a younger generation of the city's Brick Bandits crew and held at The Life Lab, a studio space opposite a train track in a particularly industrial patch of Newark. It's here that the scene's producers gather, sometimes to spin but mostly to reconnect with their peers after being out on tour. Here seven players in the Jersey Club scene—the genre's founders DJ Tameil and Tim Dolla, crossover producer DJ Sliink, rising stars UNiiQU3, Nadus and DJ Guy, and Jersey Club promoter Ngu Asongwed—weigh in on the evolution of Jersey Club, how it's become such an crucial part of Newark identity, and why the rest of the world is finally catching on.

UNIIQU3 Jersey Club is your morning coffee and your midnight Red Bull. It’s the best genre, ranging from 130 to 140BPM with hard kicks and catchy vocals.

DJ Guy The heart of the Jersey Club scene is localized in Downtown Newark. It started when DJ Tameil started bringing Baltimore Club records up to NJ and playing them out at teen parties and other club nights in Newark and the surrounding suburbs.

DJ Tameil Jersey Club was originally named Brick City Club Music. It branched from Baltimore Club music and was created and established in 1999-2000. The name changed to Jersey Club because when newer producers started to produce these tracks they weren’t all from Newark.

DJ Sliink The foundation of Jersey Club was DJ Tameil, DJ Tim Dolla, Mike V, DJ Black Mic and more. Those are the OGs of Jersey and the people that put Jersey Club on the map by making prominent music. Those guys were just doing what they loved but at the same time they inspired a whole generation under them. All of the young kids looked up to them and the Brick Bandits imprint. The Brick Bandits crew furnished the best Jersey Club music coming out in the early days.

DJ Guy DJ Tameil briefly beefed with and subsequently joined together with Tim Dolla and the Brick Bandits crew. By the time I was picking up mixtape CDRs and party fliers off the floor of my high school cafeteria in 2003, Brick Bandits was well established and running the city.

Nadus The club scene before Jersey Club was full of house music: Romanthony, Kerri Chandler, Tony Humphries, the list goes on. Growing up, we also had a lot of juke and ghetto house floating around skating rinks and clubs.

DJ Tameil Before Brick City/Jersey Club, the scene was pretty much already there through the house music roots. We had plenty of house music artists from here such as Aly-Us, who were the creators of the classic "Follow Me," CeCe Rogers, who made the Jersey classic "Someday," and many others. Jersey is also home of the legendary club Zanzibar, which is always raised in conversations about house and club music in Jersey, so it's two styles that will always be part of Jersey.

DJ Sliink Jersey Club is like a religion to people that actually grew up on it and followed it from the Baltimore days. People were already familiar with the sound and beat structure because we always played B-More Club in Jersey. It wasn't far fetched and it was easy and exciting to dance to. Young and grown people get down to Jersey Club; it’s a very friendly genre. 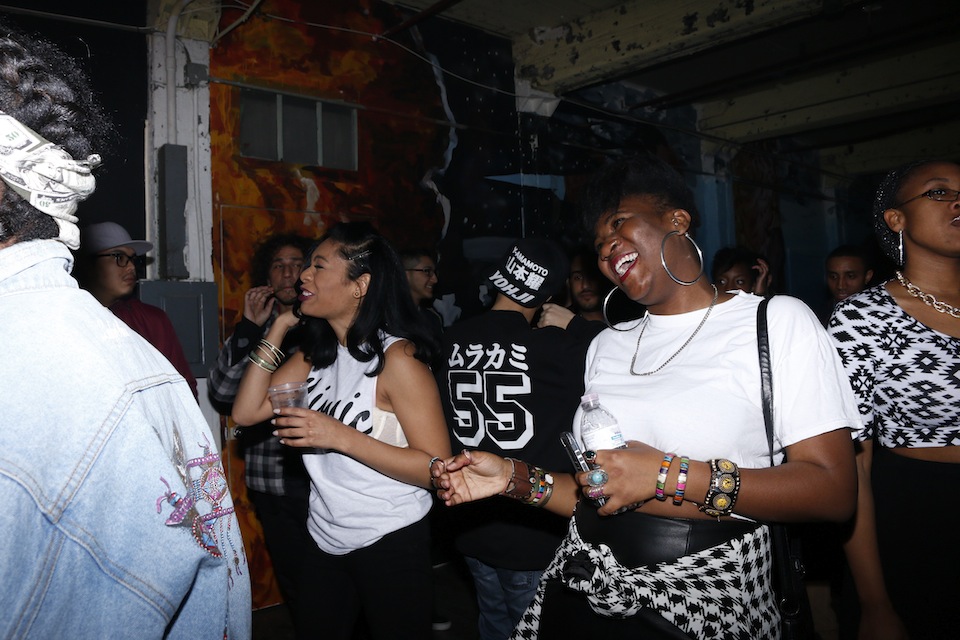 "Jersey Club is your morning coffee and your midnight Red Bull." UNIIQU3

DJ Guy New Jersey is the most densely populated state in the US, and on top of that, it's 20 minutes by train from Manhattan. So there is just a lot going on in general, and Jersey Club reflects that. Even though the genre itself is very specific as far as what elements make up a Jersey Club track, my experience DJing at parties in Newark with other Club DJs has been anything but rigid. Yeah, you gotta play a certain style and give a certain energy to rock the party, but as long as you have the crowd you can pretty much play whatever and people will respond. I've dropped original Liquid Liquid tracks, Delta 5, footwork, soca, old school acid house—if it's fast and has that energy, people will let you get away with it if you mix it right. The scene is very sophisticated in that way: people's ears are very open to new sounds and new approaches to music.

Ngu Asongwed Jersey Club is fast and aggressive, much like life in North Jersey—especially Newark. The music is the pulse and we’re moving to it. On the flip side, Jersey Club is like an escape. There’s tons of tension, and even more reasons to be tense: death, crime, taxes, jobs or lack thereof. The music is a way of working out your demons. Even the hardest dude starts to move when “Samir’s Theme” comes on.

DJ Sliink Jersey Club is an everyday lifestyle for a lot of people in the area. It’s always easy to get in trouble putting your energy into something negative. Jersey Club culture actually inspires the kids to be great at something. New Jersey isn't the greatest area to live in but with all the help of people we made something positive out of our state. With all the recent success and Jersey Club DJs touring, we gave the kids something to look forward to and let them know that they can achieve what they put their mind to. Jersey Club music is bigger than the internet, and we need a lot of people to understand that.

DJ Tameil You can hear [Jersey Club] patterns in a lot of electronic music from Dutch house to mainstream tracks.

UNIIQU3 I definitely think the Jersey Club sound has had a major impact on contemporary electronic music today in the USA. From vocal chops to the kicks and break patterns, you can clearly see that some those elements are found in Jersey Club songs.

DJ Guy I think its impact on the larger American landscape is expanding fast. Missy Elliot and other mainstream producers are starting to link up with people in Jersey. Club music in general is getting more exposure and seeping into a lot of the beats you hear on the rap and pop stations. Not that this really has much to do with the subject at hand, but I think EDM is raising the profile of electronic music in the USA in general—and EDM was pretty much forged in the fire of New Jersey shore in my opinion. Not the part of Jersey we are discussing here, but the neon, Italian-American, big synth, down the shore, trance-rave part. They were on that EDM tip ten years ago.

Tim Dolla It went from a city to a state, from state to national, and is now an international underground sound. I honestly can't say where the sound is heading but I can say it’s going to keep progressing and eventually become accepted into pop culture. 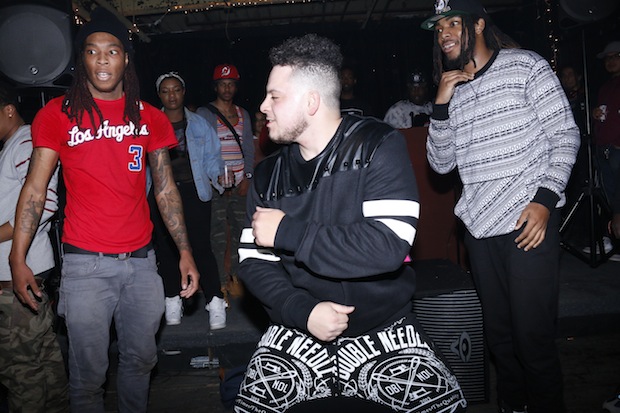 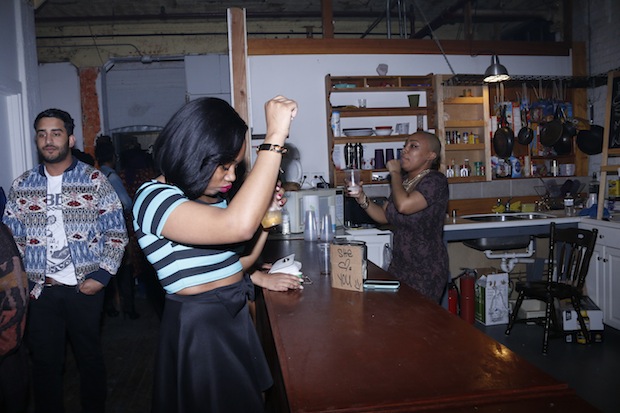 DJ Sliink Jersey Club sound has had a big impact in the electronic music scene. People are getting inspired just like we got inspired coming up and first hearing the scene. With all inspirations there is an amount of respect that has to be given to the source. Jersey always shows love to Baltimore Club Music. A lot of DJs are now playing Jersey Club and it’s a beautiful thing. I never imagined that it would go this far and inspire people all around the world to play it and even produce it.

Ngu Asongwed What I see going on in the scene right now is growth, so much growth. I've been curating events in Newark for 5 years. In the last 3 I've had the pleasure of working with Jersey Club’s leaders and rising stars, more specifically THREAD and the Brick Bandits. So seeing shit like Sliink and Nadus touring overseas or UNIIQU3 on every blog is inspiring to me—and our entire scene. Watching something I grew up on and worked with becoming something worldwide is trippy.

UNIIQU3 It’s definitely gotten more creative and complex and I believe the internet played a major part in that. When Jersey Club first started the scene stayed very local until the birth of social networks. I think Jersey Club has the potential to become mainstream. Some would say it's already there, but I'm talking about the raw stuff you don't get to hear on the radio.

DJ Guy I would like to see producers taking it in an experimental direction and really pushing the format and breaking some of the rules. People are definitely already moving in that direction and I think it will only continue. If Jersey Club is equivalent to juke in Chicago, I think it's about time for a Jersey version of footwork to emerge: something familiar to the old styles but totally off the wall and new.

DJ Sliink Jersey Club has evolved in a great way and at a great pace. It was very close to the Baltimore sound—very basic but good. Producers have been adding different elements to it and that's what it needs if it wants to be a strong genre. The audience has gotten younger and also the producers. I've been producing Jersey Club going on 8 years now and even my style has changed. I can make a well-rounded song now and appeal to different crowds. Jersey Club also took a great spin over the years with tutorial songs and videos by DJ Lilman and DJ Frosty. Hopefully Jersey Club is headed to the big labels and to big label artists. The first step was my Trey Songz’ “Na Na” remix on Atlantic Records. It’s really exciting!

Ngu Asongwed There’s a dope underground party scene growing currently in Newark, with THREAD being at the forefront (the irony of an underground party being at the forefront lol). These parties grew out of demand for the music but lack of legitimate venue space, so the DJs took to lofts and art spaces for their events, like Submerged/Seed, The Coffee Cave, The Metropolitan, and The Life Lab. It’s created this hybrid underground loft party art scene in Downtown Newark. These parties are all about the essence of the sound and having a good time, and they’ve sparked the birth of other parties like UNIIQU3's #135. This scene has all the making of something legendary. Infamous beginnings, trailblazing pioneers, new heroes and a story yet to be told. The sky’s the limit.

All photos from THREAD at The Life Lab taken by Raeann Walters. With thanks to Ngu Asongwed.