In a new monthly column called Visual Identity, Harry Gassel will highlight emerging voices in the ever-shifting worlds of art and design.

There has long been a connection between fashion and painting. The most obvious one is the fact that they both fundamentally deal with textiles, from the painter's canvas and drop cloths to piqued wool or silk jacquard. Eric N. Mack, a New York based artist, stitches together the relationship with found bolts of utilitarian fabrics, shipping blankets and articles of clothing all with sly personal touches and popular references. The cloth is marked by series of dots made by pushing paint through workshop peg boards in what amounts to a rough screen printing process. Unstructured forms are then draped, contorted and pulled into the space using the room as an ever-present third party, in a way that places the paintings and given architecture in constant feedback. Paint splatters and boot prints, both residue of a purposefully messy work process, feel referent to abstract expressionism as do the wavy forms of the roughed edge fabrics themselves. There is something almost human about the curves and unpredictability of the gesture as a whole.

Though Mack laces the paintings with personal bits of ephemera—his own clothing, fabric from a family couch, a hand print—there is also something deeply enigmatic in it, like it wants to tell you something but can’t exactly find the words. The source material comes from an ecstatic process of observation and collection as Mack’s brain makes connections between the disparate objects that float across his field of vision, though the end result is surprisingly unified. All the rolls of fabric, the paint drips and printed grids, inserted clothing, magazine clippings suddenly register into a coherent whole like a dish at a fancy restaurant that elegantly hides the messy network of farm-to-table, turning jumbles of gritty greens and unbutchered meats into something far more vibrant. And, just like that, the dissonance becomes harmony and you understand exactly what the artist is trying to tell you, that he’s been saying it all along, that maybe you already knew. Here Mack talks about bootleg purses, the grammar of garments and what it's like to be the same age as Rihanna.

Where are you from? I was raised in Capital Heights Maryland outside DC. My dad and mom met at the National Gallery. At a certain point my dad wanted my middle name to be National because he wanted it to really document my life in relation to the gallery.

So you could be National Mack right now? That's a strong name. Yeah, I like that. I recently made a pdf that I called National. It's something I want to work with. What the word means is something so strange but it's also super ubiquitous like everything in DC, like National Savings bank—it's something you hear over and over again. But my Mom freaked out and was like, that's not what's gonna happen. So she thought of a name that would be close enough and they compromised on Nathaniel.

How did you start thinking about being an artist? What are the first things you were making? I was always good at art but I never wanted to be an artist. I liked animals and I wanted to be a zoologist. But I went to an arts high school because I always drew and that's the space where I began to make work or learn what that could be. I took painting sculpture and photography because I couldn’t choose between the three, but I ended up sort of narrowing it down to painting and sculpture. It's the same shit I do now, basically.

How so? My hand has never been really been precise. There were ways that I had to adapt to connect with these mediums. I learned more about myself not in necessarily failing, but you can learn more about the material through its failure. 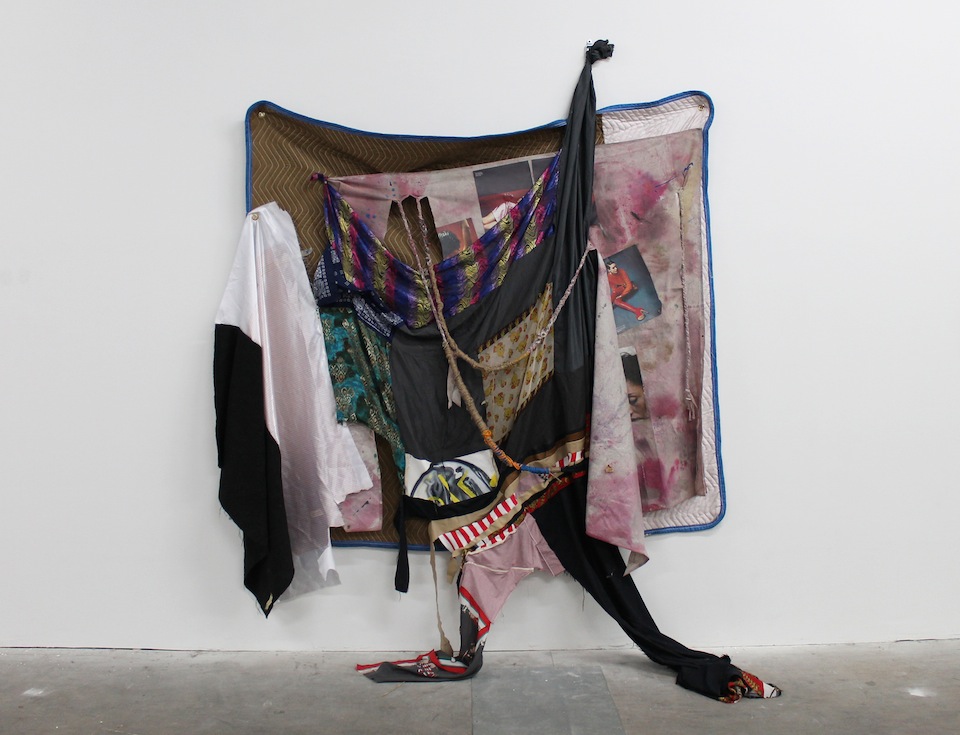 A lot of your work deals with ideas of fashion and style. Were you always interested in this? My dad had a clothing store called Mack’s Discount Clothing and he would come up to New York and buy all kinds of shit wholesale, like he’d buy women’s hand bags, denim jeans, urban wear, t -shirts, and things like that. He ended up taking all the money from the store and buying a moving truck and converted the back into a store. He put in wood paneling, he refurbished it. My dad always knew a lot of people so he would go to his friends' barber shops and be in the parking lot and sell to his friends and his friends' friends, the patrons of the stores. And I would be in the truck helping.

What kind of stuff? My dad was selling Coogi hardcore. I had a couple of nice Coogie sweaters. We were also selling bootleg Chanel. I remember flipping the channel when I was twelve and I see this Chanel runway show. Seeing some of the things that we were selling in their authentic, most ideal space—in terms of the kind of music that's played, the colors and the framework in which the garment is presented—really contextualized this bootleg purse. I also saw it as my duty and a real point of interest to pay attention to what was happening in the runway shows. I paid attention to the way people walked down the street, what people wore and what I was interested in wearing as well. FUBU was really big. “Fubu Sweatsuit” is the title of one of my works right now. There’s something about the energy in fashion, the energy in the garment. There's a physical lifespan but also a lifespan to the potency of the trend.

It's different ways of crafting identity—like the runway show is the idealized version but a copy on the street can do the same thing. Sometimes it just does communicate. Sometimes a copy is good enough. With the good ones you really couldn't tell if it was a fake. But that's the danger—they create a desire in others.

You seem to have a very considered personal style. Is what you wear part of the work? I’ve been wearing these Carhartt double knee jeans. I like their utility and design—the rivets are really present and somehow this contributes to maximal functionality but its decorative as well. The pants that I wear are really important in relationship to the work because I work on the floor and they end up collecting so much paint residue. 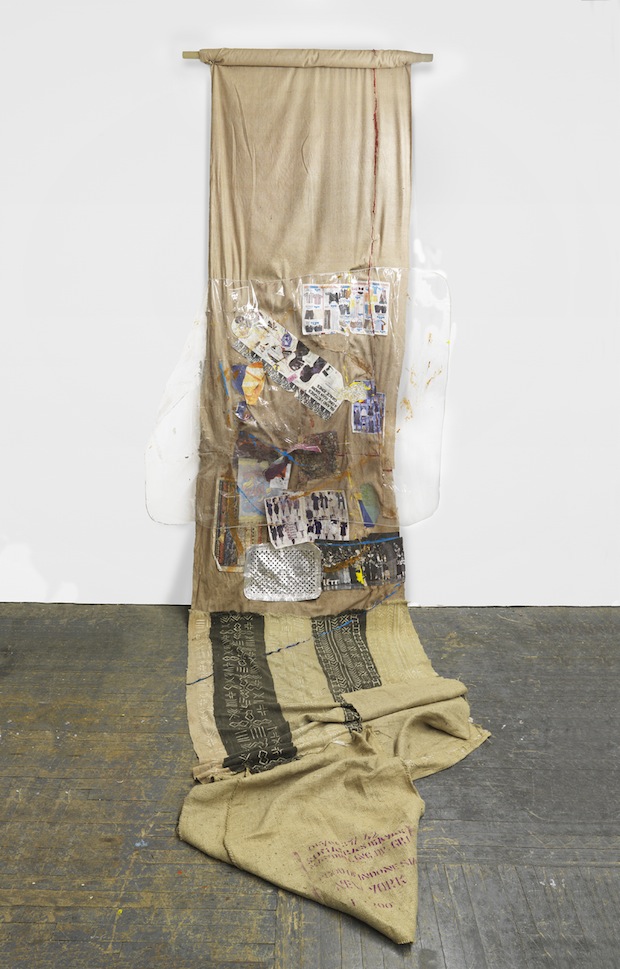 "I want my materials to feel like they come from the everyday."

It also feels related to your interest in the history of things? A lot of my t-shirts are really old so there’s some sentimental memory attached to them. It has to do with context. Like this Adam Kimmel plaid shirt, the fact that it I bought it new communicates a complete look. I go for a sort of diversity in surface in the history of the garments. Sometimes things coalesce into a concrete look and sometimes things end up looking like fragments, like I really like this shirt or it's all about the shoes. It's a volume thing as well. The shirt having volume and feeling comfortable in a free flowing fabric in contrast to a structured pant. Thinking about an interesting silhouette.

Do you have any favorite fashion designers? Who in fashion are you interested in right now? Well, always Raf Simmons. His shit is always very much together. It's so interesting to see his points of reference and how they translate into his own design. It can be a shift in silhouette or a shift in color, super basic shit like putting sneakers with a ball gown. I mean that could look really fucking stupid, but it can also be something really engaging. And next season there’s something else. There’s a monumentality of the moment. Everything gets done, everything ends. Everything is gonna be vintage in some second hand shop.

How do these references end up relating back to your paintings? I really love Nicolas Ghesquière. He used to design for Balenciaga and now he’s designing for Louis Vuitton. There’s this season of Balenciaga that I still think about, I think it was spring 2008. There were these floral suits, they looked like neoprene but they were structured. They had corset lacing, the women looked they were wearing football pads. Those are several references that are really complicated and communicated a particular emotional feel and relate to the body in a very specific way. The gesture ends up being the silhouette, where volume is collected and how that weighs on the body, and how one walks around. I’m thinking about those details.

This tension between utility and style seems related to your material choices, like how you mix your own garments with things like moving blankets. I want my materials to feel like they come from the everyday. The personal clothing that have clearly been used are more of a direct gesture compared to a paint stroke. With the moving blankets I also relate them to quilts. Right now I have a moving blanket in my studio and I also have a quilt from the 1950s and their form—the stitching and stuffing—is basically the same. The moving blanket was factory-made and the other is hand sewn. And in the quilt there's lots of different fabrics. I’m interested in the blanket as a surrogate for having conversations about painting. They can be placed on a wall. They can also be on the floor; they can be folded. They’re definitely an object that is very familiar and that memory is universal. People give quilts to babies when they’re first born.

Do you pay attention to pop culture? Celeb gossip? I only check for Rihanna basically.

What's your deal with Rihanna? You’ve heard of that thing where all these young artists are younger than Rihanna. I think I’m the same age as Rihanna. What the fuck is she doing? What's she wearing? I was thinking about her outfit at SNL when she was singing stay and she wore this Bob Marley dress? Did you see that? She had 1920s harlem renaissance finger waves and a Bob Marley strappy dress which is a good look, a complicated look.

How about Venus X accusing Rihanna of appropriating and not attributing the Ghetto Goth name and style? I mean, I check for both Venus X and Rihanna. People have been blaming Rihanna for everything, but that's an interesting situation because not only can her icon take it, but she has more to give. I think it has a lot to do the media’s ignorance and the language that they used. They don’t know the basement party called GHE20G0TH1K. But you see all kinds of people at those parties anyway. One of the last parties I went to I saw Alexander Wang and MIA hanging out in the corner. Its like, OK. They’re just looking at chains clothes. It's a cultural whatever.

Were you a part of the GHE20G0TH1K scene? I haven’t been to a party in a long time and things change so quickly. When I was working at a restaurant, after work I would go to GHE20G0TH1K every Wednesday night and I was looking forward to it. I had my restaurant attire on and I put my cap on, get my drink, have a really good time. I think that's what New York is about, that kind of shit. New York is also about shit looking really different in six months. Not that I can’t keep up 'cause I could if I wanted to.