FOR THE FIFTH YEAR, THE BOY BRINGS THE WORLD TO HIS CITY

In the days leading up to this past weekend’s annual Drake-fronted OVO Festival, held at Toronto’s Molson Amphitheatre for the fifth year in a row, rumors about potential special guests reached a fever pitch. The city was abuzz with speculation about how the actor-turned-rapper-turned-maybe-actor-again could possibly top previous years’ appearances by Kanye West, Lil Wayne, and Stevie Wonder. Might we witness a resolution to the Drake-Rihanna-Chris Brown love triangle? Would Beyoncé, on a night off from her On The Run tour, swoop in on a private jet? Could labelmate and erstwhile confidante Nicki Minaj, in the middle of a pre-Pinkprint promotional tear, make an appearance? Young Thug? Remy Ma? Bobby Shmurda? *shudder* Iggy Azalea?

Drake’s habit of bringing out unannounced, unexpected guests from the innards of the venue has become OVO Fest’s selling point, a physical manifestation of his spot at the top of rap and a way to impress peers and fans alike with his status and industry clout. No one man should have all this power, he seems to be saying every time an A-lister walks on stage. After all, Drake is nothing if not ambitious—in the handful of years since his debut, he has laid out, and successfully implemented, a trajectory that took him from cornball outsider to undeniable leading man. Even Kanye admitted it, telling GQ in a recent interview that the most popular man in rap is Drake. In the end, the surprise acts—Lauryn Hill, J. Cole, Usher, and G Unit, among others—were cool, but the ultimate theme of the weekend was that Drake, with his outsized charm and catalogue of hits, could have carried the entire festival on his own.

OVO Fest has undergone a parallel transformation, from run-of-the-mill hometown concert to event huge enough to attract out-of-towners to the city; never have so many American accents been identifiable at the festival, a friend pointed out. The two-day show was recently the subject of some civic ire, after being awarded a $300,000 grant from Ontario’s Ministry of Tourism, Culture and Sport. But its status as “one of the biggest festivals in the world,” as Drake himself described it, is plain— the grounds’ $8 waters and $15 beers are sure to contribute valiantly to the provincial economy. 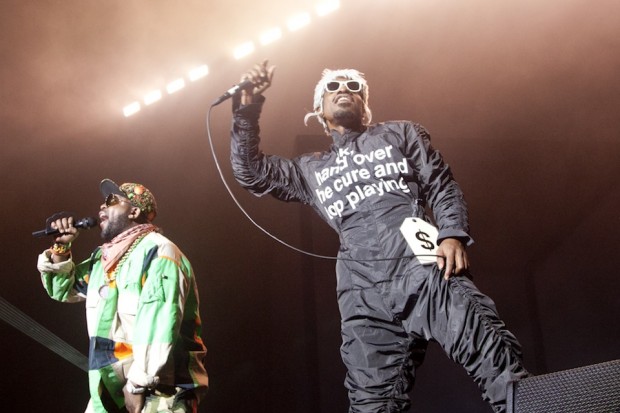 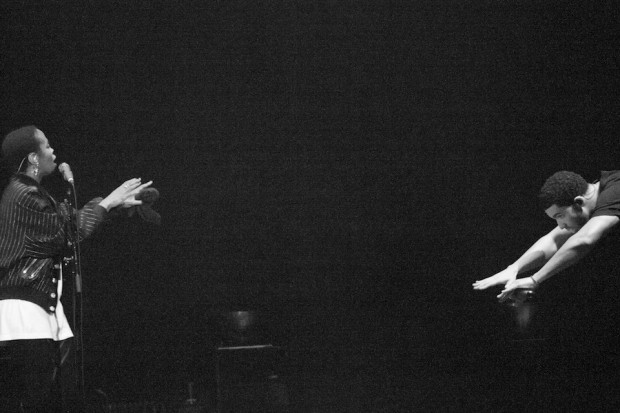 The first day of the two-day event was headlined by Outkast, whose twentieth anniversary reunion has booked them on what feels like every stage from sea to shining sea. After a summer of playing festivals, the duo’s show is a tight science. Alternating between their radio hits—every one of the many chaperoning parents in the crowd sang along furiously to “Hey Ya” and “Ms. Jackson”—and lesser known classic album cuts, Outkast’s magnetism was on full display. Special appearances by Bun B, who came out for a crisp version of “Int’l Players Anthem” heartily dedicated to Pimp C, and Big Boi’s sons Bamboo and Cross, who danced adorably to “Kryptonite” and “Ghetto Musick” during his solo part of the set, were a nice touch to an already stellar show. Opener YG's string of West Coast party hits sounded green in comparison.

Day two began with an unremarkable performance from Jhene Aiko, who was identified by several audience members simply as “the girl from Drake’s album.” Expectedly, Aiko was largely overshadowed once Lauryn Hill appeared, surprising the crowd into a collective gasp and performing frantic takes on songs like “Killing Me Softly” and “Lost Ones” before launching into Drake's "Draft Day." Note: we now live in a world where Drake receives louder and more sustained applause than Lauryn Hill. Same goes for Trey Songz (who is apparently over that pointed barb on Nothing Was The Same’s “From Time”), J. Cole, PartyNextDoor, DJ Khaled, Tinashe, OB O’Brien, Usher, Majid Jordan, and G Unit--all of whom were welcome additions to the evening, but none of whom, with the exception of Usher, perform with the wit, dexterity, or muscular control of The Boy. Toronto, whom he repeatedly praised for being “the best audience in the world,” looked on with a mix of pride and admiration. Despite the deafening hype about surprise guests, Drake’s two-and-half-hour-long show was an intentional, effective reminder that he is the main event and needs no one but himself. As a pair of teenagers in matching OVO beanies wondered aloud as they waded through the scrum on their way out, “Was that a festival or a Drake show?” 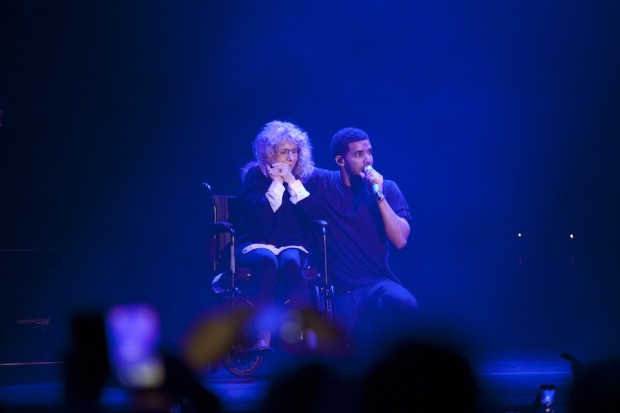