It's been about two years since we put Santigold on the cover of F51, but since she played Studio B for the issue's release party she's been harder to find than someone willing to love us for us, and not just because we can score them tickets to Wild Yaks shows. Sure, Santi put on for her city on Jiggaman's "Brooklyn (We Go Hard)" and even beefed up Major Lazer's "Hold The Line" but then the videos for both were just balmy cartoons. This past Tuesday, however, we witnessed Santi in all her leopard print/white short set glory, along with Kid Cudi, Jemina Pearl, DJ Mom Jeans and a brain-scrambling noise dance troupe called the Terror Pigeon Dance Revolt! at Diesel's U:Music Miami stop. Though both Cudi and Jemina have promising debut albums to their credit, it was Santi (and a pair of lithe dancers) who reminded us how wrong we've been to have neglected Santogold in recent months. We also found out that she's been training to climb Mount Kilimanjaro with Lupe Fiasco and a bunch of other people for charity, and by the time the people were rushing the stage to wild out to Momjeans closing out on the wheels, we were swooning again just like the first time we heard "Creator." 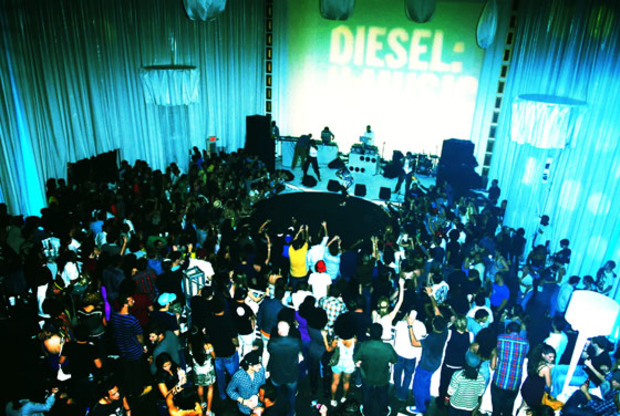