On Friday night, I saw some of the best minds (or at least bodies) of my generation wrapped in ironic pink cummerbunds and turquoise taffeta, crushed underneath the symbolic weight of a balloon arch, and swallowed up by nostalgia for an event half of them skipped the first time around. I went to an adult prom.


It was the CD release party for Gayngs—the upper Midwestern indie rock supergroup whose new record Relayted culminates with the Bon Iver-getting-his-Bone-Thugs-on slow jam “Last Prom on Earth.” Gayngs started out as a joke—a bunch of friends and friends of friends getting together in a Minneapolis studio to get stoned and record a tribute to '80s British art rock. They ended up covering “Cry” by 10cc’s Godley and Creme, and came up with ten originals. One of the gags was that each song would be recorded at a slinky-on-downers, 69 beats per minute. 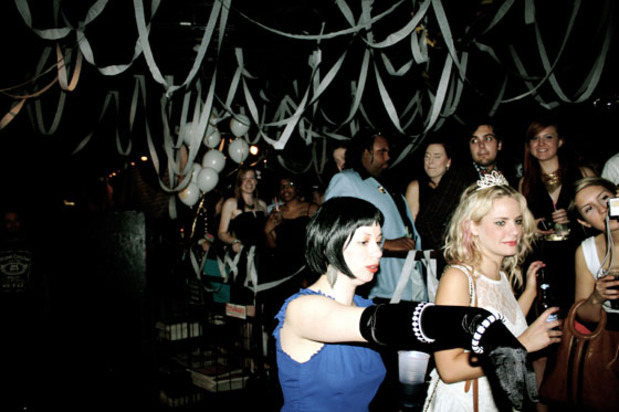 Somehow their inside joke—a bunch of Midwestern bros (members of Bon Iver, Solid Gold, Dosh, and Megafaun; rappers Dessa and P.O.S. from Doomtree) coming together to make fun of the idea of an “upper Midwestern indie rock supergroup”—snowballed into something real. They actually started to get treated like an upper Midwestern indie rock supergroup. They were actually signed by an indie label, Jagjaguar. The record was actually finished. They actually had to get 20-some people together for band practice. And then another of Gayngs’ inside jokes—let’s theme our first show after our last song, "The Last Prom on Earth!"—gained a bizarre momentum too. They sold out First Avenue (the Minneapolis club Prince made famous in the '80s). 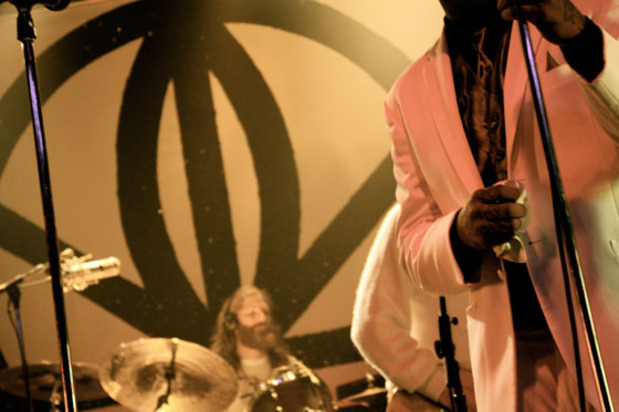 The supergroup playing prom—Gayngs plugged themselves into a campy visual narrative that’s instantly familiar to anybody who’s seen the same Sullivan Show pastiche endlessly repeated on MTV. Naturally, everyone in the five-state area capitalized on the excuse to buy a ridiculous new dress or a vintage tuxedo jacket for the party. And whether you skipped your real prom to do a bunch of ecstasy with the other burnouts or were elected queen, you were walloped by hokey nostalgia as you walked into the room: the PA was blasting songs like “Lady in Red” and “At This Moment” (the love song from Family Ties!). Prom is kitsch and as the years go by it seems to reference itself exponentially—and this generation is really good at piling on the references. Gayngs obliged every cornball and matchy-matchy ideal: First Ave was decked out with gold streamers and black and white balloons (each emblazoned with the Gayngs decal, a weird amalgam of a peace sign and a stylized mary jane leaf). A high school gym-style banner with painted block letters reading THE LAST PROM ON EARTH hung from the ceiling. The cocktail napkins were Gayngs-sign themed. No detail was left unattended. 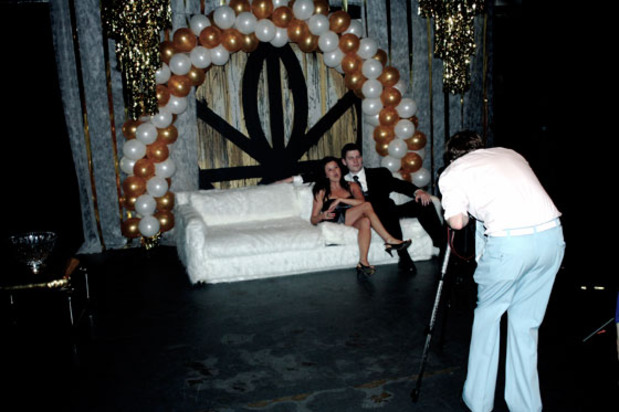 Relayted has a "last few stragglers standing around the kitchen as the sun comes up" vibe, but performed live on stage, with doo-wop girls, a saxophone, guitarists, turntables and a half-dozen keyboards, it becomes a spectacle. And that’s not even counting Gayngs' matching outfits or the mirror ball and 1500 balloons overhead. Their own amateurish packaging turned out to be so genius that they seemed a little trapped in it—the energy onstage lagged behind the energy in the room and there were inevitable problems with microphones and monitors. The record is a polished studio project, and the Last Prom was staged with the same precision, but getting a 20-some-piece band to come together after a handful of practices is a recipe for a fine mess. It wasn’t, though: with all those white tuxedos and mustaches, the super-sized band looked like an all-star '70s television show come to life. They were jocular and fun to watch. Although they don’t play real prom songs—there isn’t an “Angel Eyes” or “One More Night” on Relayted, and their cover of “Cry” is way more downbeat than the original—you get the feeling that Gayngs appreciates the sentimental education provided by the canon, full of adolescent regret and longing. Though their own versions are a little weirder and druggier, there are still layers of pretty strings and falsettos sauntering along with the regret and longing. Generally, all this artifice worked live: “Ride” is a young dude’s anthem with soul, “Faded High” is erotic enough to make the coolest chaperon blush and “No Sweat” is super emotional without being embarrassingly emo. 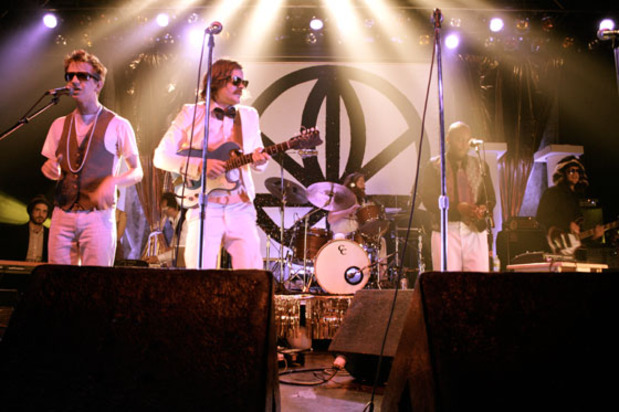 By the time the balloons dropped on the last song, “The Last Prom on Earth,” it was clear the ghosts of John Hughes and Phil Collins (he’s dead too, right? Kidding.) were in the room: this was one more night, really we swear this time, our teenage rite of passage as Möbius strip. This kind of '80s nostalgia is epidemic, of course—the grown-up prom has become a bona fide trend. But while there's definitely something sad and desperate about a tipsy 30-something wearing a prom dress and a dying flower around her wrist, there’s something tragic about a drunk 18-year-old in a bad dress too, right? The latter is just less self-aware—she won’t get it until the pictures are up on Facebook. This was a poignant last prom, with great rumors like “Prince is in the building with his guitar!” spread (he really was, but he begged off from the side of the stage, saying, “They don’t need me up there”), boyfriends and girlfriends (and husbands and wives and—yikes—mom and dads) posing for cheesy pictures, and of course all the bad clip-ons and shiny new shoes feeding into the ubiquitous threat of permanent fashion regret. Obviously my generation needs 14 framing devices to take becoming adults seriously. No, going to prom again probably proved we aren’t ready to grow up—but who is? Like our ancestors, we've had to anyway, and we all have to go back to school on Monday. 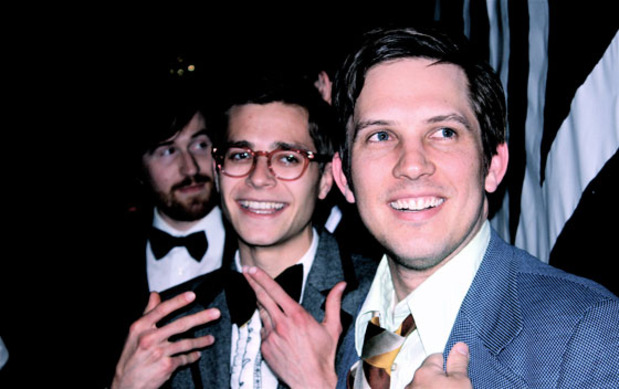 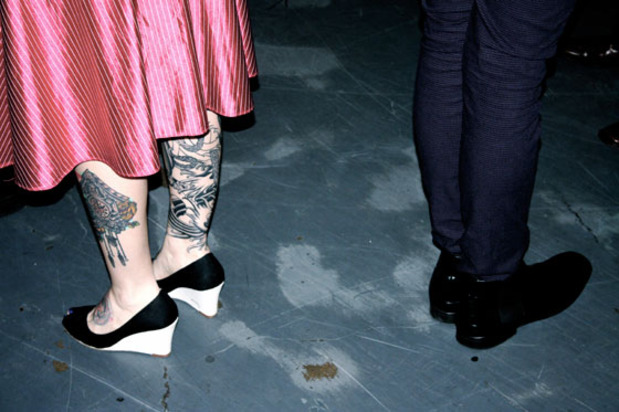 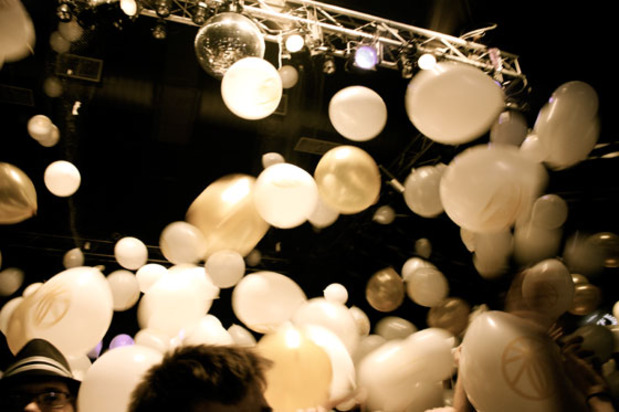