There must be some implicit contract between festival promoters and Mother Nature saying that a festival is not complete without just a touch of mud. And sure enough Sunday morning, the final day of Lollapalooza, it poured, dingy brown Chicago rain. It was enough to stir up the dirt, drop bummer puddles of water through the grounds, but far from enough to prevent people from showing up. And, as if Mother Nature just didn’t have the stones to bring it, she said “eh” and gave up, giving way to the hottest, clearest day of all three. 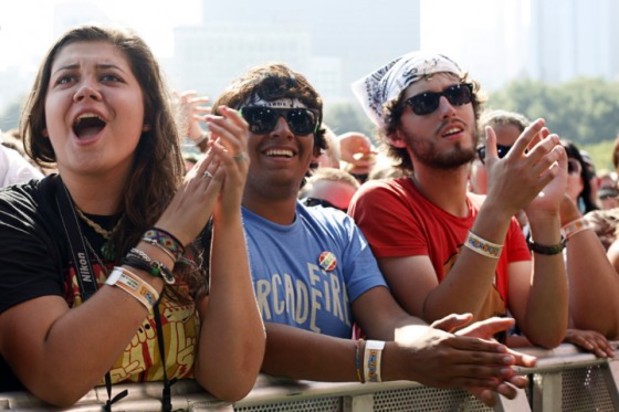 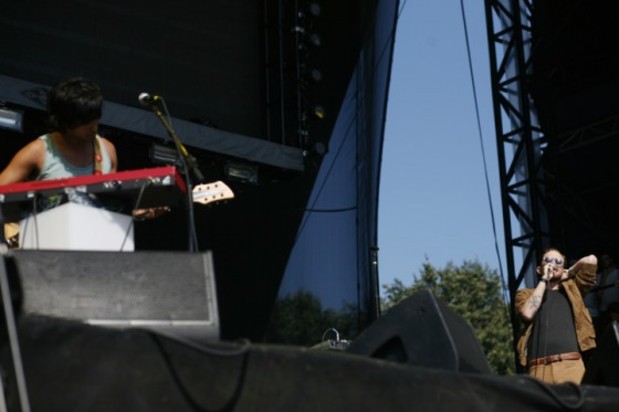 After some rainy interviews and pomegranate coconut water (eh), we decided to mosey to Kidzapalooza, the only real bit of the festival we’d not explored. Three days of mostly rock is a lot of rock, and for early afternoon baking in the heat, there is no better way to ease into it than with watching little kids dance. Adorable! Maybe it is our impending menopause making us question our decision to never have children (so much of that is JK), but, man, little kids dancing is pretty much just as good as Blitzen Trapper, who sadly we opted to skip in favor of Dan Zanes, a hugely popular kid’s musician. Zanes is a former member of the Del Fuegos, a (grownup) group who had their moment in the ’80s. But he transitioned out of traditional rock and into playing for a trillion adoring fans. To come to Chicago, he scaled his group down to a trio and played with the backing of the Chicago Youth Symphony Orchestra, teens so hyped to be on stage they could not stop smiling. Behind us, a fairly fat a man cracked a tallboy of Bud and it shot everywhere. “I’ve soiled this area,” he said to us, but sat and drank his beer pleasantly, no feeling of taint present. After Zanes finished his lovely set of gray pompadoured folk, we watched a crew of kids breakdance. They were not particularly synchronized and it was better that way. 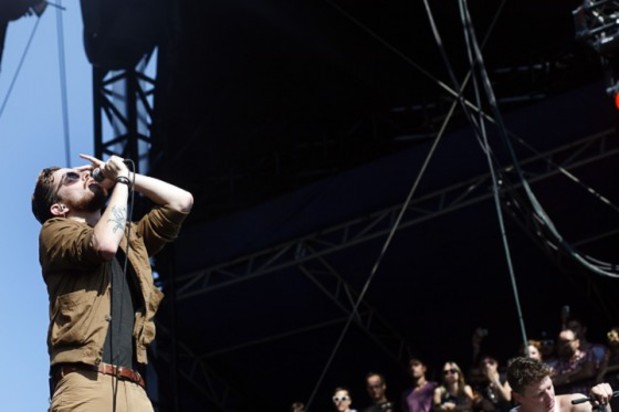 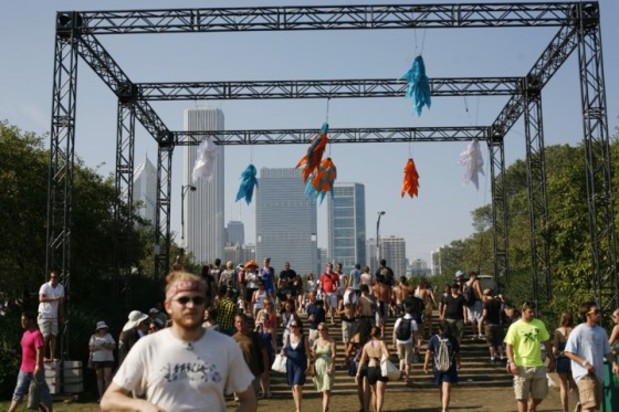 It could be our imaging, but, with the exception of one song that sounds like it was produced using the panels of a spaceship, did Yeasayer turn down their futuristic vibes and turn up their hippie roots? We’ve always been big fans of Rusted Root leaning Yeasayer and for a festival, they seemed happy to pick up the bass and have a little rollick through the funk. Last time we saw Yeasayer in New York to a sold out gigantic Webster Hall crowd everyone was losing their minds, singing along and holding their crowns so their brains didn’t fall out. Though it should come as no surprises to see that multiplied by a trillion, it still was. And, yes, we know that we continually write “Lots of people liked this band! Wow!” It is, however, still a hugely startling surprise to see thousands of people singing along to songs weirder than a 12-legged dog. 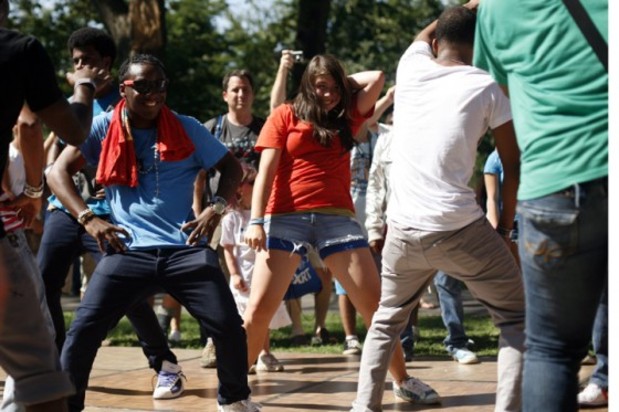 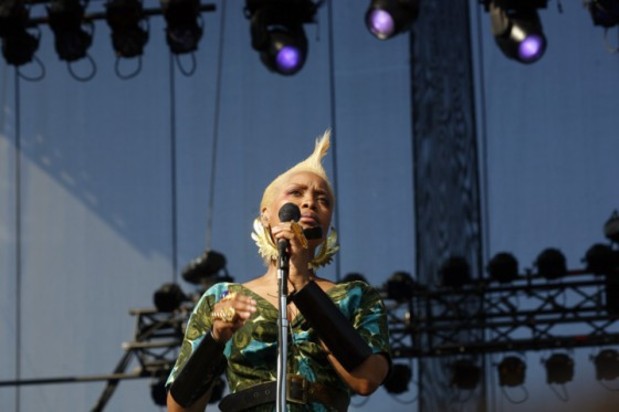 The real star of Yeasayer's show at the Budweiser Stage—and maybe of the entire day, or even festival—however, was not the band, at least not exactly, but their American Sign Language interpreter, a woman with cool short blonde hair in a very bright hot pink top with a large tattoo poking from the chest. She stood on a pedestal between the ground and the band and translated for those in the hearing impaired area between the photo pit and the general audience, swinging her body wildly at tempo changes, playing heavy air pass, interlocking and heavily jiggling her fingers at ambient noise. She seemed to know all the words, too, not just signing what she heard—though this is possibly wishful thinking. But imagine if it’s not! What a job to have to listen to Yeasayer on extreme repeat to be able to sign all the words. We heard reports that Soundgarden had a similarly extreme interpreter, and though we had a dream about listening to “Spoon Man,” alas we did not see with our own eyes. Or hear with them, as the case may be. 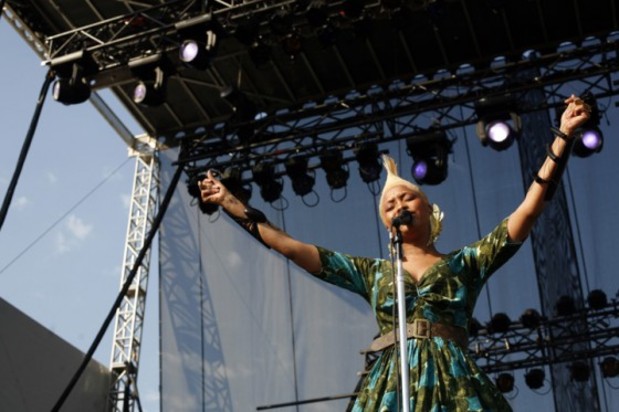 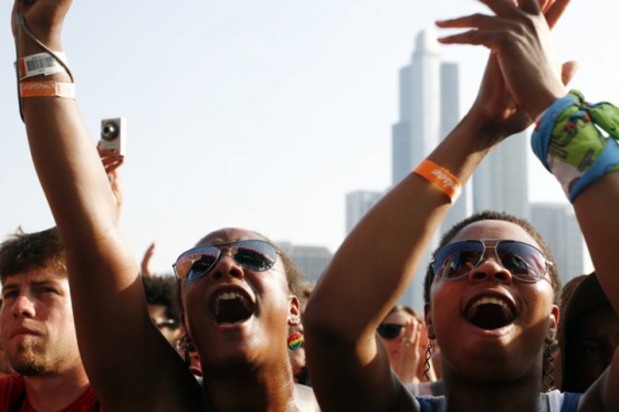 Erykah Badu was the surprise booking of the day, like Zanes a respite from a lotta rock. Though, really, Badu looked (and occasionally sounded) pretty punk. She had a foot high bleach blonde Mohawk (?!) and earrings so big she could have used them as forearm guards, had she not already been wearing forearm guards. Her set was buoyant and fun, inspiring the kind of eyes closes, arms in a backwards semi-circle dance that is wonderful to watch. People get seriously zoned to Erykah. As they should. Her band is heavily tight and she is a fierce figurehead, now at the point in her career where she is happy to do whatever she wants all the time. Her speeches to the audience about living your life were the other side of the coin to Lady Gaga’s Friday night screeds, though sans vitriol. Most things are better that way. And, surely, the vibe at her stage benefited from it, easily the most popular act all weekend where it was easy to maneuver close, everyone happy to let you pass by. She closed the set with an instrumental cover of Eddie Kendrick’s super classic “My People…Hold On,” symbolic horns drifting out into the beginning of Wolfmother’s set, just across the field. 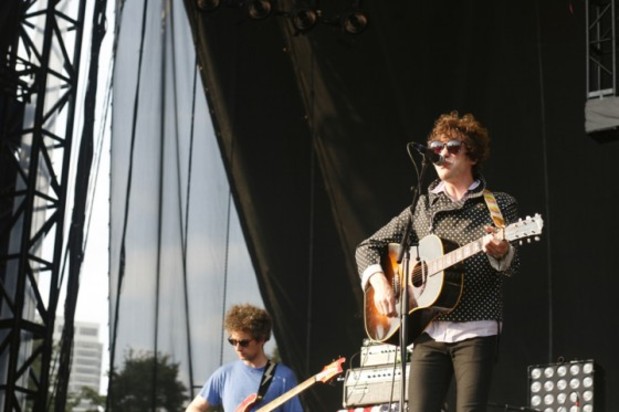 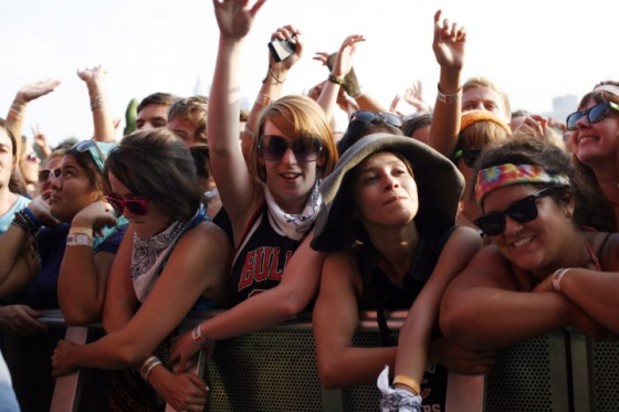 MGMT, who we opted to see instead of Wolfmother, are also very popular. Coming towards the Budweiser stage from afar, we gasped at the impenetrable mass of folks before us. “There must be at least 2000 of you out here to see us,” they said from the stage. “Are you kidding?!” someone passing by us said incredulously. Yes, they are kidding. And indeed they like to kid, Ben in a bright orange blazer pounding keys throughout the set, which, in its sprawling rock with old school synthesizer vibes, recalled Woodstock more than any other act we saw all week. There’s something very unmodern about MGMT. It’s good. 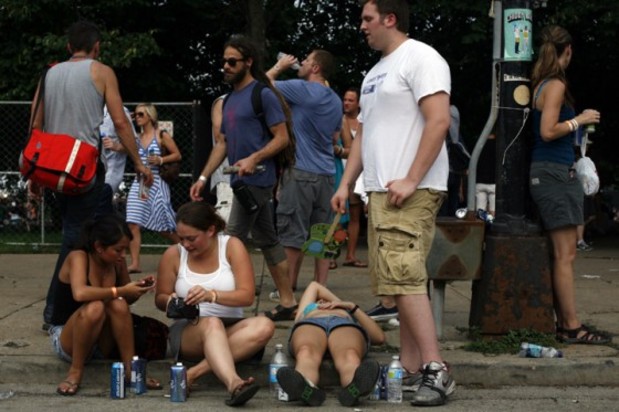 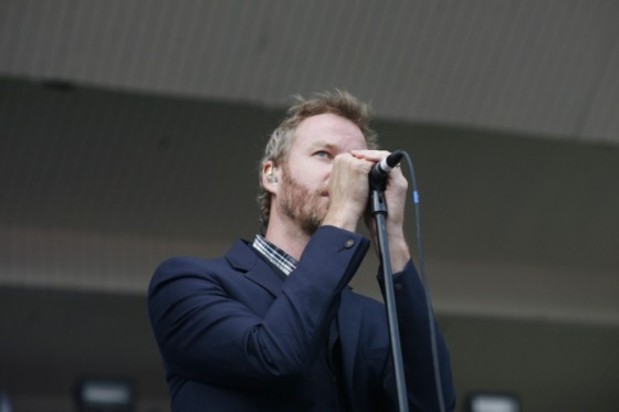 After their set, in preparation for the huge crowd to come for Arcade Fire, we grabbed a tamale and sat in a tiny field of grass listening to Temper Trap just across the road, but view-blocked by a giant transit bus that had been set up for anyone to sit in and soak up the a/c. Lollapalooza cares. Seriously! Temper Trap are forever notable for the angel voice of their singer, and as we watched ants devour the corn tamale wrapper, the band closed their set with Rhapsody commercial song “Sweet Disposition,” which faded into the unbelievably loud sound of crickets. It was basically perfect. 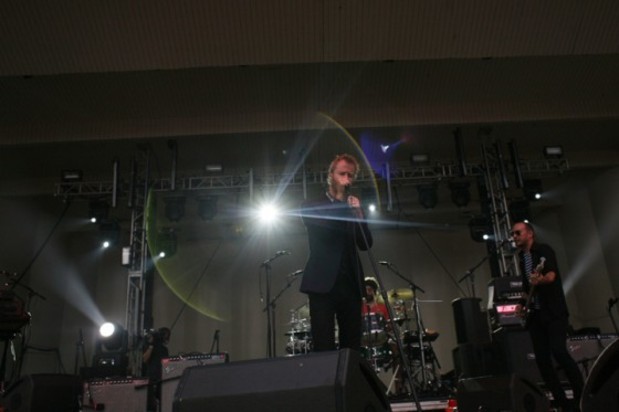 So were the Arcade Fire, a team of like 50 people, who from the moment they hit the stage played with maximum power, Win Butler appearing like he was going to shred his guitar to bits. Everyone in that band was hugely sweaty within like four seconds and every time a new face came on the Jumbotron, more bits of hair were slicked to the skin. Everyone likes a performer! Here was ample opportunity to be entertained. The Arcade Fire are wonderful because they are so identifiable, so many large themes posed, questions asked. “I want a daughter while I’m still young,” is a brutal thing to stay to 90,000 people. But how else to personalize something so inherently inhuman? There is nothing natural about so many people being penned together for any reason. But if there’s going to be a reason for that much collective body heat, intimacy is it. 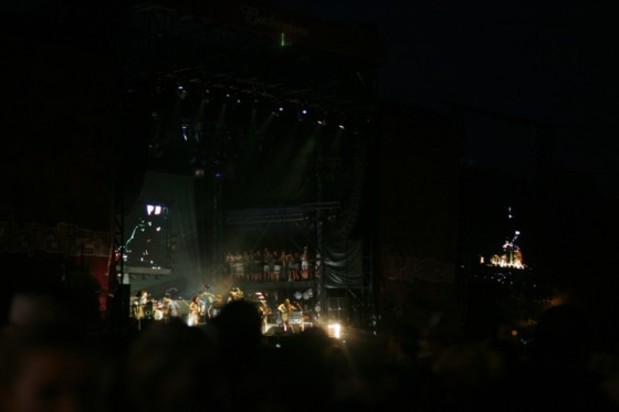