Austin City Limits, held in downtown Austin’s Zilker Park, has been tainted for years by biblical plagues: choking dust, manure mudslides and perennially lame line-ups. The musical offerings in recent years were so mediocre that even many locals didn’t bother shelling out for tickets. (There are, of course, diehards who will attend every year regardless but they’re fixtures of this scene.)

This year the festival’s organizers got their act together on several fronts, most importantly in terms of bands. Every year you can rely on folky, easy listening from the likes of Norah Jones and this years headliners, the Eagles, but for 2010 they’ve pulled credible names out of the current buzz, like Girls and Gayngs, and backed that up with real once-in-a-lifetime major acts like Sonic Youth and LCD Soundsystem. Plus we were getting seriously down with some serious Budweiser (getting so busy!). On Day 1 of the festival, the first band we saw was Chief, who performed in front of limestone cliffs, shaded by oaks. The crowd was meditative and the afternoon temperatures were breezy to match. The performance was so solid that we can’t imagine them not making an appearance at next year’s festival. They happen to be big fans, too. 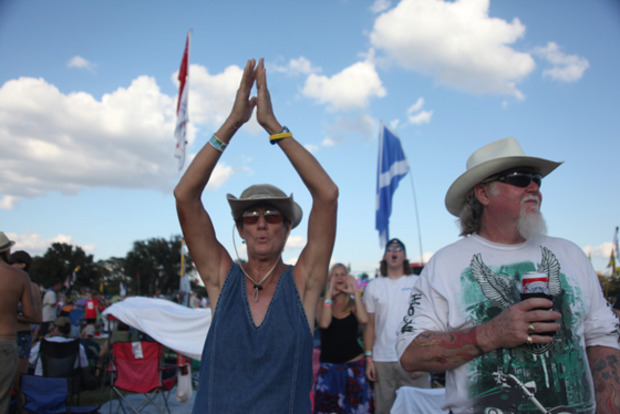 “This is kind of an awesome festival. It’s clean. No festival in the UK is clean,” said Evan. That opinion was seconded by bandmate Danny, who said, “This is probably my favorite festival I’ve ever been to.” But it could have been delirium talking—the band never slept the night before, opting instead for a one-hour nap on the luxurious festival grass. After Chief we headed to Girls, who had roses and white blooms strapped to the mic stands and spread over the keyboard, with a funereal vibe. Their performance was touching, and personal in a way. The lost chance lyrics were strangely comforting. The crowd at Girls was a true cross section: sorority girls from UT in backpacks and bikinis, former juggalos, indie-looking couples holding hands. At Miike Snow the Swedes were somehow leading a crowd of hundreds into dance revery in the brutal, unblinking sun of 3pm. They brought out Ezra Koenig of Vampire Weekend to perform “The Kids Don’t Stand A Chance” in a perfect moment of festival incest. After dabbling in the huge crowd action we needed something smaller for comparison. Under a shaded tent, getting some relief from the heat with tall, koozied cans of Budweiser, was a writhing mass of people sweating intensely to the “indigenous Sicilian” jams of Qbeta, a bunch of Italians playing brass instruments in sunglasses. 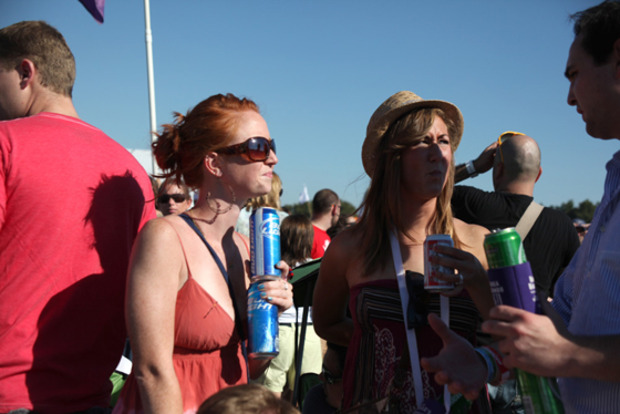 Next were Bostich & Fussible of Nortec Collective, which gave me the impression that this particular tent was the designated world music zone. They brought out their Tijuana Sound Machine, a low-lying spaceship equipped with iPads and Tenori-ons while the traditional musicians played accordions, acoustic guitars and a tuba/trumpet player did more than anyone at the festival. After dusk fell, the biggest names drew even more people towards the biggest stages for the nights headliners. Despite the ridiculous number of people milling around a relaxed attitude still reigned. People lazed on blankets, reading books, while Sonic Youth played in the background. Watching an iconic band, on a grassy knoll with the sunset, was unforgettably beautiful. But at a festival with competing sets, tough choices have to be made. It was painful to walk away from the Sonic Youth set to attempt to get a spot for The Strokes but the mass was growing large beyond belief and so we made our way. In addition to a huge crowd, the Strokes had huge expectations to fulfill. Their official pre-show the night before at Stubb’s was a confusion at best and disappointment at worst to even the band’s biggest fans. With no opening band, they played for just 40 minutes, including an encore. So as the de facto headliner (competing only with Phish) for Friday night, with a 90 minutes to fill and a 10,000+ crowd, no one was sure how they’d perform. Would they be aloof, or on fire?

They came out just 15 minutes late, which is basically on time for them. Immediately crowd surfing began, and was immediately halted by security. The band sounded perfect and Julian Casablancas’ voice was surprisingly beautiful. He added panache and trills to well-loved standards, and then began to make awkward small talk. “Money can’t buy you love. But money can find you love… …Once you start making some money hot girls come out of the woodwork.” He sounded paranoid. None of the rest of the band spoke at all. Albert Hammond Jr. was in a fitted white suit that just stole the show sartorially, but all were impressive in shrunken black jackets and chin-length hair. Except Julian, who wore a hoodie/biker jacket combo, dark sunglasses (“because I’m an asshole.”) and a big gold watch. They started with Is This It? And ended with Take It Or Leave It. If that’s not a statement then we don’t know what is. For a first time seeing this band, we were ecstatic. Yeah the show clocked in at just under an hour but at songs three minutes a piece, that’s pretty complete. While Casablancas still doesn’t seem to feel at ease with his own fame, he and the band pulled off a real stadium show. 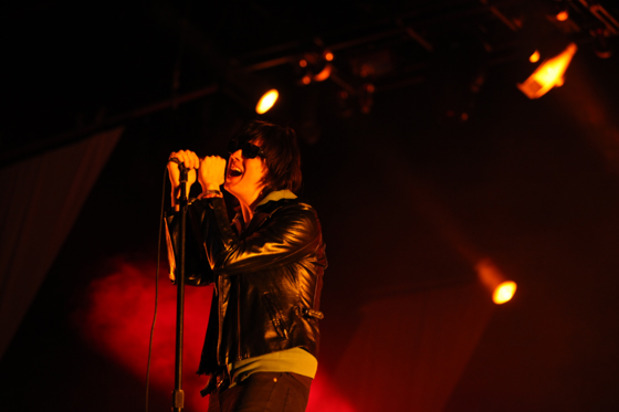 The end of was bittersweet—throughout the day you have to make tough choices between bands you love, and there’s always the feeling that you should have been at another tent at another time. With two more days to come, let’s see if the weather and the mood hold up to the high expectations set by day uno.