Day 2. Instead of running stage to stage today, we decided to take a calmer approach. We began by hanging out in the grass, prepping our ears for the Black Lips, Local Natives, Dan Black, LCD Soundsystem, MIA, and many many more. But it became immediately clear that we were surrounded by high school students. Righteous midriff abounds. Misty-eyed surfer boys eat ice cream and stared into the distance.  The hottest part of the afternoon and we already needed a nap—or a “pick-me-up” as a fellow festival-goer suggested (AKA Budweiser o'clock.) 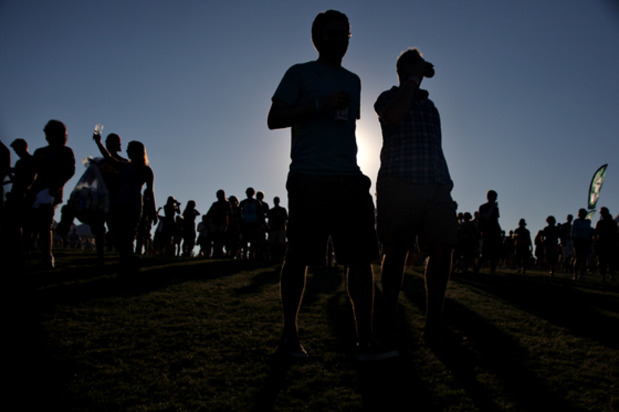 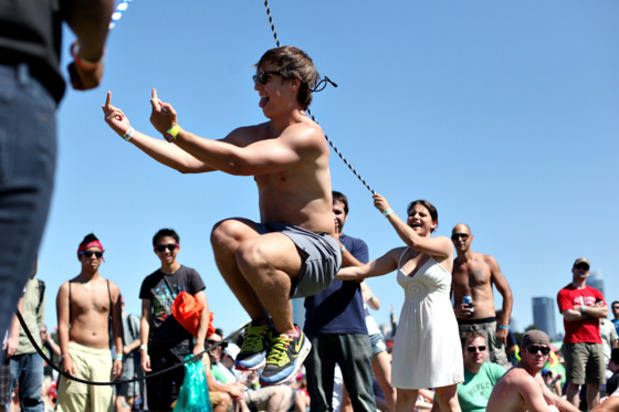 Then it started, and from literally the first chord it was obvious: this was the rightest place to be, in a rare moment of festival certainty. The Black Lips brought the first mosh pit (still a gentle, kind of bobbing one) of the weekend. The crowd was finally giving security something to worry about for a moment. The music was garage-y and a bit sneering but then, wait—now it’s soda shoppe pop? Awesome. 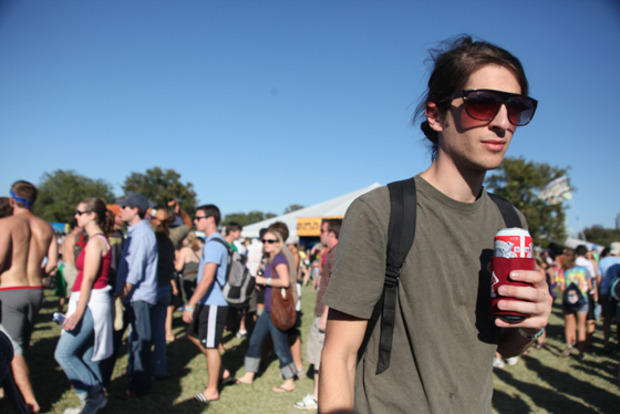 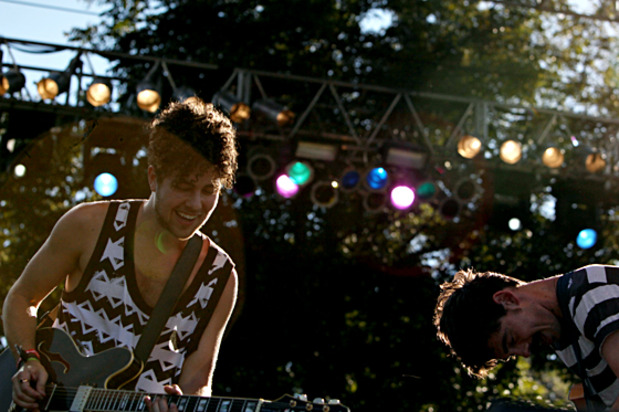 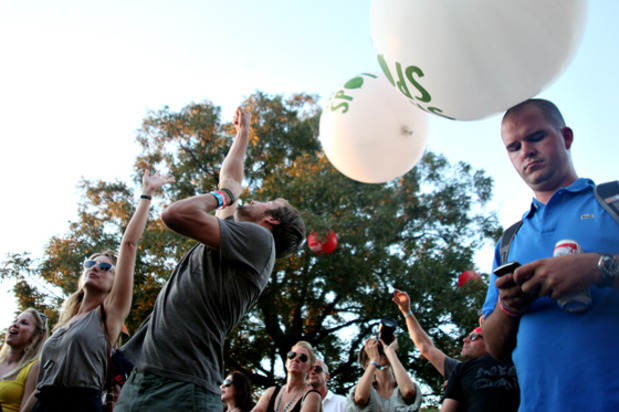 The singer of The Black Lips has the best hairstyle we have ever seen (in fact, everybody at this festival seems to be rocking a new great look). It’s basically like a crow landed on the side of his head and just stayed and got gelled over and gelled over. Also: playing drums with a tambourine=amazing. Waiting an hour in the stony sun baked our brains just enough to thoroughly enjoy LCD Soundsystem. Just as the sun was about to go down over the horizon, they rushed the stage with an epicly-long “Dance Yrself Clean,” followed by an all-too-true “Drunk Girls.”  They seem to understand the festival game—play the hits, make 'em scream. And it worked! We danced ourselves clean—or clean enough, we suppose, drinking Buds and getting loose. And though they totally smash as a stadium band, we caught a glimmer of Murphy's inherent awkward New York humility when the howling stopped and he was forced to make small talk to a crowd. Blinded by the “midsize star” lowering over the grassy knoll, he apologized repeatedly for wearing sunglasses on stage. It only makes us love you more, James Murphy! 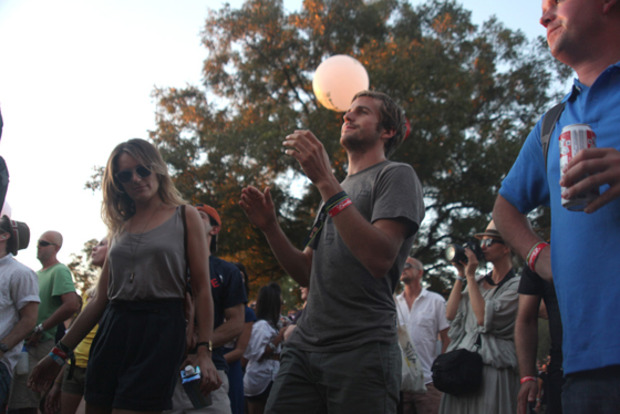 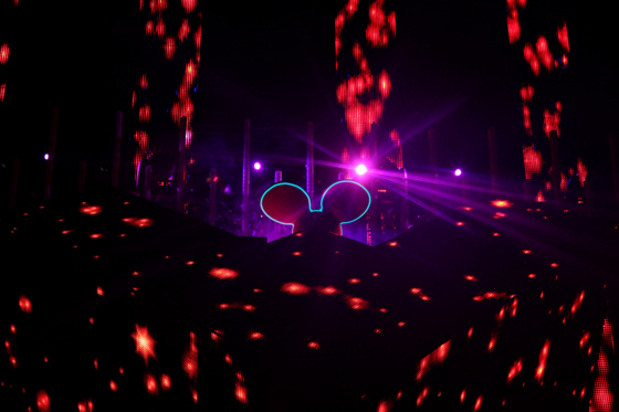 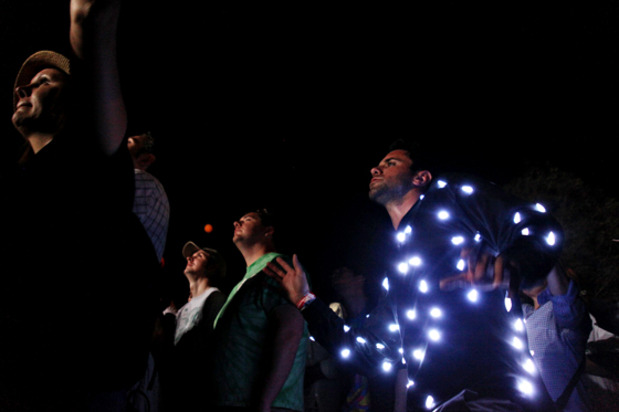 And then, the moment we had been waiting for all day long! What sort of immaculately orchestrated stage show would M.I.A. produce? Would she offend us with politics or put that stuff aside for a minute to provide pure, unfiltered entertainment for the masses? With an entourage of backup singers and dancers clad in burkas and military attire, she did a bit of both, but not without style. After a rousing, fake-gun-in-the-air rendition of "Paper Planes," M.I.A. went M.I.A. Still scarred from her one song performance at PS1 this past summer, we feared the worst: utter desertion. But less than five minutes her black-and-white collared shirt appeared in the crowd where she seemed to have made a few friends. Lucky dudes! Never one to leave without leaving a message, she closed with "Born Free." We're stoked for one more day of warm weather and cold Budweiser before it's all over and we have to fly back to cold times. A little caterpillar just crawled onto our laptop keyboard and that is pretty cool because it means WE ARE OUTSIDE. 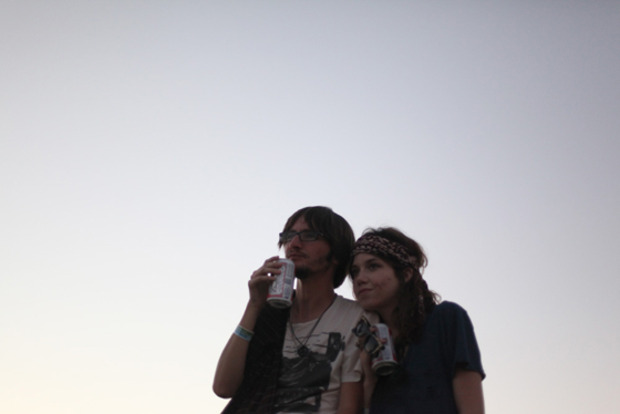