Day three began just as lightheartedly and nonchalantly as the days before. There must be something in the water here in Austin (or maybe it's the Budweiser), because you guys are just a little too relaxed and its making us drop our NYC guards, which might result in terrible, regrettable mistakes! All of this drinking Budweiser and jumping rope double dutch-style (just kidding about that part) is going to have to stop tomorrow, but we took today for what it was worth. Devendra Banhart was one of the first to take the stage against a murmur of confused onlookers. “Who that man?” The confusion was a direct result of a new-found coiffure for the usually straggly-looking musician. And his wardrobe wasn’t anything special—just a plain blue tee-shirt and olive pants. But regardless of the norm wear, his trademark idiosyncrasies were definitely present. In an unprecedented festival move, Devendra asked the crowd if anyone out there had a song they’d written that they always wanted to perform live. One very lucky guy (a guy we happened to had already met, shirtless, at the Black Lips stage just a day ago) got up on stage and behind Devendra’s guitar, and probably had a psychological meltdown as his wildest dreams came true in front of thousands of people. Afterwards the kid and Devendra kind of locked heads in a cosmic embrace, and that was that. Some of the performance, like the clothes, were more traditional than we would have expected, but Banhart and his band, the Grogs, really shined on songs like "Carmensita," "I Feel Just Like A Child," and a great cover of Roxy Music. 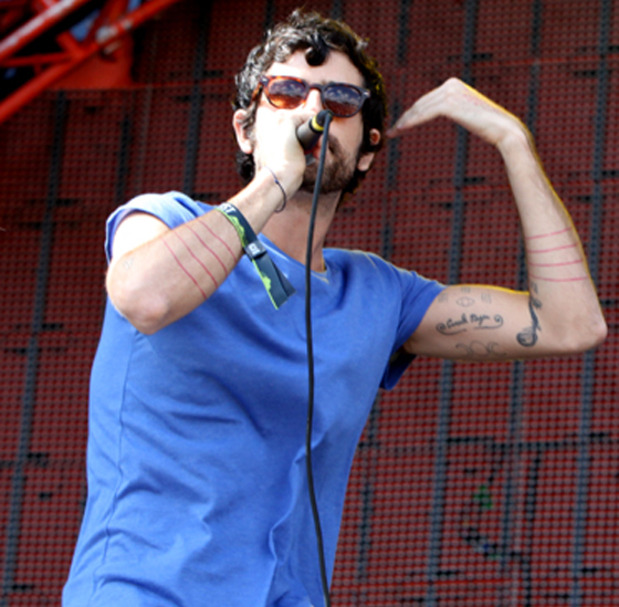 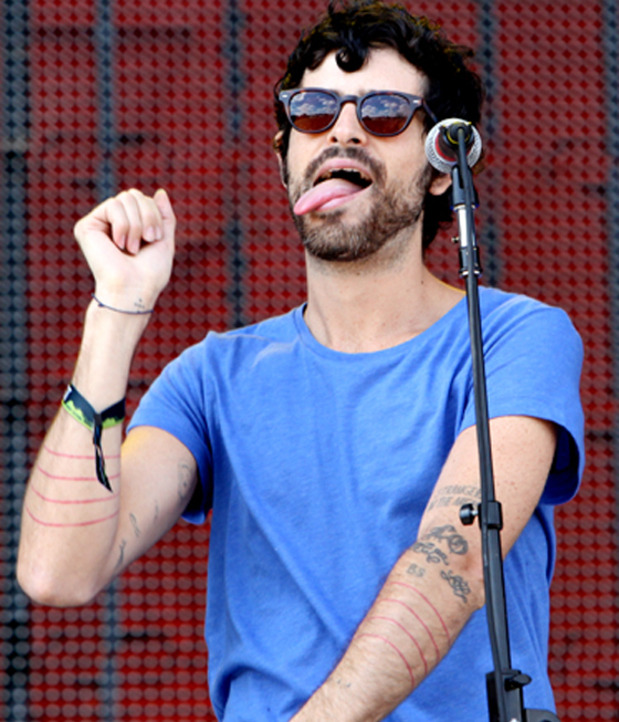 Gayngs, who we were all anticipating, had their bus stolen from downtown Austin, and despite their efforts, they were without the crucial gear necessary for an eleven-thirteen person band to perform. We discovered this the more confusing way—by walking up to the scheduled stage and eyeing the Rastafarian flag draped over the stage. Nope, not Gayngs—but instead, a little stoner outfit called Lance Herbstrong. Instead, we headed to see The Morning Benders, a seriously young and youthfully serious band out of San Francisco. Surprised by how technically strong they were on their instruments, we could sense a psychadelic/experimental undercurrent running through their basically indie pop hits. We're totally curious to know what's next for these dudes, after festival season is over. 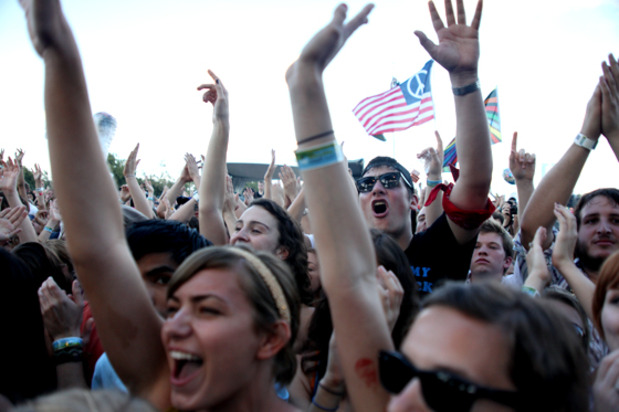 After Morning Benders we headed to post up for Yeasayer. The weirdest thing about Yeasayer’s set-up was the giant ball of flesh/legless body (which they call Bommo) that was placed atop the drum kit. In addition to taking turns on vocals, Chris Keating and Anand Wilder each added guitar, synth, tambo, and cymbals to the mix. It seems that by inheriting Devendra’s former stage Yeasayer was beholden to perform another onstage coup, this time by an Austin poet named Dax, who is apparently legendary. He was a big, gray bearded thing carrying a tote bag and he read a poem called Yeasayer No. 4. It was so surprising and he read it so fast that we kind of only got the gist of it. The uplifting lyrics could not have come at a better time—by Sunday afternoon, in the dead heat, everyone at a festival is in wilt mode. But with some deep jams, hand clap stomp beats and self-medicating stage presence Yeasayer brought Austin (which Keating called “one of his favorite places in the world”) back to its senses. 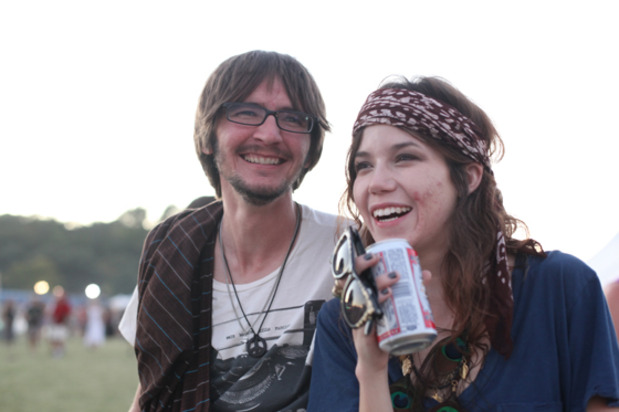 And then there was the face-off between The Flaming Lips and Band of Horses. Two very different groups, but both festival appropriate in their own way. Having seen these acts in smaller, club environments before, we couldn’t resist splitting the hour between each stage. The Flaming Lips, it seems, have reached a point in their career and performance ethos that they are at their most relevant in a huge festival setting. The stage show was busy with illuminations and video projections (such as a lady in repose with concentric rainbows issuing from her crotch) and populated by costumed dancers, et cetera. In a not really surprise move, Wayne Coyne kicked it off by stage-crawling inside a giant plastic bubble into the crowd. They played a few classic songs, like "She Don’t Use Jelly," and then launched into a crowd participation thing where Wayne would say something like motorcycle or monkey and the crowd would go wild doing an impression. It kind of felt like a high school acting workshop. 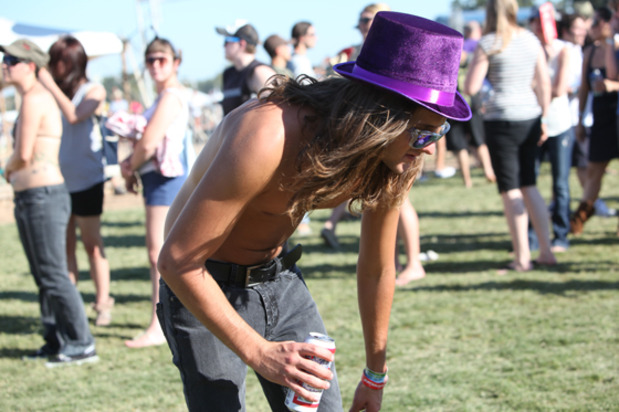 So then we went to catch up with Band of Horses, who have found a way to significantly scale up their stage presence from a quiet kind of noble affair into a full-on rock experience.  The band took songs like "LRC" and "Funeral" and added a some spunk or some heft or something to make the music stand up a little taller. Their ability to transcend the stadium-sized audiences at the festival was a sign of a bright future for these dudes, and we hope they never turn it into a pass-the-balloon type of experience. Earlier this year Cee-Lo Green covered a Band of Horses song (“No One’s Gonna Love You”) and they returned the favor by closing the show with a cover of his song “Georgia,” which really sounded snappy and cool for a band that has been covered here and elsewhere as borderline dad rock. 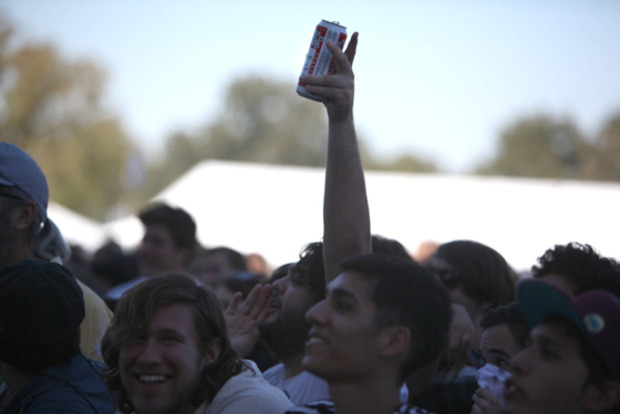 Between the Flaming Lips mega-visuals and Band of Horses big country rock, it was pretty impossible to leave the festival without some sense of satisfaction. Oh, but then there was the moment that all of your moms and dads had been waiting for. Some of them bought tickets solely to see this act and would pay no attention to any other act all weekend. We don't care who you are or how hip you are, one has to admit that The Eagles have a lot of fans—especially in a place like Austin where all kids who went to UT in the 70's never moved away from their college town.The Budweiser stage was full of them and even full of a few "youths" like us, who though it may be a direct influence of our used-to-be-hippie parents, can't help but hum along to "Take It Easy." And when we think about it, "Life in the Fast Lane" is still pretty cool. Also, just before the Eagles took the stage, another group named the Eagles (Philadelphia's football team, durr) were winning the game against the SF 49'ers, so that was kind of an awesome coincidence.