Drew Lustman grew up in New Haven a bit of band geek, learning the ins and outs of a plethora of instruments. Since his interest in electronic music blossomed, that mix of curiosity and ability has served him well, allowing him to dabble aptly in a host of genres, many under the general umbrella of UK dance. But Lustman, releasing records as FaltyDL, is a New Yorker, and, as he points out, not necessarily restricted to the "dubstep" demarcation that originally followed his songs. He's recently become an incredibly prolific producer and frequent DJ, one of the few in the states who seems to earn both the respect and interest of his UK and European peers. Because he's just a subway ride away, we invited Lustman up to our office to talk about what he has coming up, how he got interested in producing and the necessity of place within music.

So you're busy.
Planet Mu and I just did two 12-inches, one of them called “Phreqaflex” came out about a month and a half ago, it was like sort of my take on garage and 2-step and stuff like that. And I think that’s been pretty well received. My next 12-inch on Planet Mu "Endeavour" just came out. It’s like my take on house music, like really slow 110-112 BPM house music, that druggy slow sludgy house music. A bunch of remixes in the pipeline still coming out, one I did for Zed Bias, one I did for Gonjasufi at Warp that they pulled, but I got paid for it so that’s cool. Album for Planet Mu February-ish, 12-inch for SWAMP’81, Loefah’s label, called “Mean Streets." I’m really excited about that, it’s one of my favorite tracks I’ve ever made. It’s a sort of slow burner, a real afrobeat tune.

Why is it, “It’s my take on this, my take on that,” instead of, “Here are some songs”?
I’m forced to think like that because I read so much genre-fication these days, so I think about like what is it, and I think I don’t have necessarily the courage to just say this is what I made, I feel like people want to put it in some sort of corner, so I say well this is what it’s like. It doesn’t even matter anymore. I just caught someone, this digital distribution company, selling my next 12-inch, this house one, saying it’s dubstep, and I’m like, It’s not even close. I understand if it’s relatively around the same tempo, or it has some similarities, but this just couldn’t be further from that. I have no problem with that, dubstep, at all, I love it. It’s just I feel like it’s kind of a joke at this point.

Dubstep is what you got lumped in with when I first started hearing your name, and I felt that was a fair enough demarcation.
Definitely. At the time I was making the tracks for that album, in 2007, 2008, dubstep was a lot different than what it has become now, or what people say it is now, so it sort of depends on when you hear it and when you’re comparing to what you think is dubstep. A lot of the artists that were releasing dubstep at the time I looked up to, and I still look up to, and I appreciate what they’re doing.

Why do you think there are so few successful dubstep producers in the US?
Dubstep is huge in the United States, but interestingly enough, since I’ve been lumped in with dubstep at this stage of my career, when I go play cities in the US now, if I’m lucky enough to headline, the openers are playing some pretty aggressive, tear-up dubstep, the chainsaw bass type stuff. And the crowd is loving it, so that’s great for them, that’s wonderful, but for me it’s like, okay you booked me to play this show and I’m assuming—or I’m hoping—you listened to at least a few tracks of what I’ve released to know that’s pretty far from what I do, I’m just a little confused of what it is you want me to be. At this point I can get away with it a little more, because I have a little bit more of a following in the states where I can do my own thing, but that was so terrifying the beginning, following some crazy tear-up dubstep set and starting it with, I don’t know, something chill. Digging myself a grave every set. I used to clear floors, but not so much anymore. That’s good. 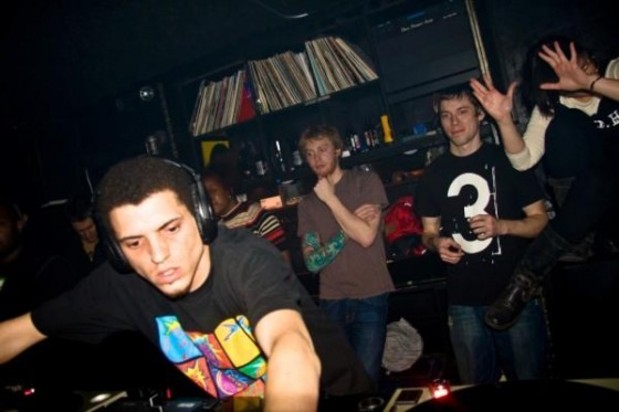 How did you get started making music?
How to make the music took me a while to figure out, but I knew I wanted to be in entertainment. I like making people laugh, and I like making people happy, smiling and stuff, I think it’s part of the entertaining thing. I had a lot of energy as a young kid. I was pretty restless and my folks decided to get me drum lessons at five years old, which was pretty young, and I was too small to sit at a drum set, so that didn’t work out too long. But I showed a focus in music lessons that I didn’t show in regular school, because I hated school, so drum lessons turned into a bunch of different woodwind instruments, which turned into bass and guitar by the time I was 13, so I was always playing music. So I understood from that angle. But then I have to say, getting a record like DJ Shadow’s Endtroducing in ’96 or ’97 was like, How the hell is this made?! It makes no sense to me. Like, how is the drummer doing that? I thought a live drummer was sitting there doing this crazy stuff, so you can imagine how I felt when I heard jungle. I thought, Wow, this drummer is incredible, and then you realize that, Ohhh, there’s sequencers, and samplers, and wow this is crazy. I wish I could almost discover it again, because it was incredible to learn that this was such an alien thing happening.

It’s almost like this music makes you a band leader.
Kind of. In a way. And you’re only limited by your sampling skills as to the talent you can put in a song.

Do you sample yourself?
I used to. When I played upright bass a lot, I sampled that a lot. I have a couple hours worth of samples that I put into a lot of my songs, but there’s usually enough sub-bass from the synthesizers beneath that that you can’t really tell that I’m playing something. But I did that for a while.

Has it been different making individual tracks as a solo act from being a band member making an album?
I have a lot of friends that are just incredible DJs, I have a couple friends that are Rinse FM DJs that also produce far fewer records than I do, but the records they put out are just dance floor killers, just incredible. I have a harder time making an anthemic track for a dancefloor, maybe I can do that for the headphones, but maybe that’s why I’ve got a little bit of the name that I have, where I can exist in this scene but also be known for larger EPs or albums that work hopefully on the dance floor but definitely at home, to just chill too. With writing an album, as opposed to a two or three track single, I’m trying to think like, What am I trying to say here. If I don’t have anything to say then I have no business releasing an album. And I think why the first album in retrospect was easy. I was just making tracks without ever thinking they’d be coming out, and when I sent them to Planet Mu and they liked them, I was like, Here’s another hundred.

Has your attitude changed?
n this next album, is I’ve definitely learned a lot production-wise, and I’ve also learned a lot from performing and DJing, because I didn’t play any gigs before I released my first album, and in the last year I’ve been to Europe six times, and I’ve played all over the world, like over a hundred gigs and it’s been incredible, it’s totally nuts. And I have to say, at first it fucked up my production. It totally ruined my production because I was out there playing these tracks that I wrote and I’m just watching everybody on the dancefloor sort of stare, or maybe check their phones, or go to the bar and buy a drink, and you’ll see a few people dancing but not a lot, so I was like, oh I gotta go home and write some bangers, like make some tracks that when I play them they’ll like get everybody going. So I went and I did that and I stopped being able to make album tracks, and I made a few singles and that was cool, but now I’m trying to get back into just making music again. It’s an incredible talent to be able to make tracks that get everyone on the dance floor, to me that’s the most intelligent form of dance music, so I’m trying to find the balance there and hopefully get a little of both.

Do you feel like you’re getting there?
I think so, I mean the last I spoke with the label was we were almost there with the album. It was going to come out in October, then I was like, Whoa whoa whoa, I put the brakes on it. I was like, This is awful, this is not what I want to be saying right now. So we scrapped half of it and the best six tracks became the “Phreqaflex” and “Endeavour” 12-inches. Some of them work well on an album, but I think it’s done well as separate singles.

What if Planet Mu wanted to do a singles collection, would that be cool?
When I’ve talked to some of my friends, these DJs, super-DJs so to speak, they don’t view an album as an excuse to put together a collection of dance tracks together, that’s a poor decision. I think you have to own up to whatever it is, because you have a responsibility. It’s a job, to sort of say exactly what it is you’re doing, because people are going to ask.

Do you ever think about moving to Europe?
Yeah, I think about it all the time. I think I’d be gigging more, I’d probably be making more of a living, or if I lived Berlin or something that was only a 70 euro Easy Jet flight from every gig, it would be cheaper. But you know, I live in New York right now. I love New York. My friends and family are here, I don’t want to go anywhere else…half the time, maybe.