Nick Barat is a former FADER editor better known as Nick Catchdubs, a noted DJ and co-founder of the Brooklyn-based record label Fool’s Gold. Bad Boy Greatest Hits Vol. 1 is the lone vinyl record he still brings to every gig, just in case.

I turned 30 this January, which means I’m old enough to have had “It’s All About the Benjamins” as my junior prom theme, and young enough to think that was THE BEST SHIT EVER. I never reviled Diddy as a Cristal-spilling goofball or the enemy of all rap realness; instead, I had No Way Out on constant car stereo rotation alongside Ruff Ryders, Wyclef, Master P and everyone else who was cranking out radio jams in the late ’90s. Good times...though the following ten years were nowhere as kind to Mr. Combs and his Bad Boy empire. Sure, his stature today as a perennial industry icon is untouchable, but the 2000s were pretty dark for dude! He started them in a courtroom! With Jennifer Lopez! In the years that followed, most of the original Bad Boy roster acrimoniously split for other labels, while expensive albums bombed left and right (remember the Forever LP or Ma$e’s two disc opus Double Up? Me neither). Even the occasional hit from Black Rob or Shyne would be followed by years of inactivity—it’s hard to release albums from jail. But even at the label’s lowest points, there were still gems for the Bad Boy faithful (ahem) who never stopped Diddy bopping.

Diddy “Get Off” (2006)
Before Dirty Money could walk upright, there was the evolutionary missing link of Diddy’s solo album Press Play. It’s actually pretty solid throughout and even spawned a legitimate Billboard hit in the Keyshia Cole duet “Last Night.” Yet this awkwardly awesome lead single—little more than an electrocuted James Brown vamp—best personifies the growing pains of the album, if not Diddy’s entire decade. As the man himself puts it: “Y’all tired yet? Y’all ready to go? Hell no! Get off me!” 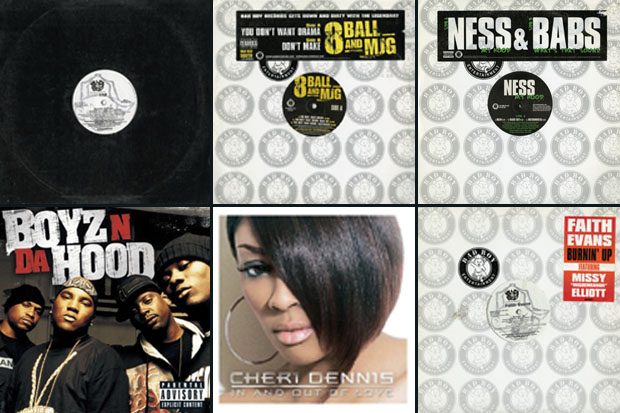 112 f. Ludacris “Peaches & Cream (Remix)” (2001)
I can’t believe I’m giving away my secret robot R&B heatrock. This was produced by Mario Winans, who would have a solo hit of his own a few years later (“I Don’t Wanna Know”) over the same Enya loop the Fugees used for “Ready or Not”—a shameless Bad Boy sample jack for the ages! I don’t think this 112 remix was ever commercially available, yet WMG still takes it down from YouTube constantly. The bassline is bananas, it needs to be shared with the world.

8Ball and MJG “Don’t Make” (2004)
Even at the commercial height of all things crunk, Puff couldn’t get this one to stick. Which is a shame, because it’s one incredible combination: Ball and G’s peerless Memphis flow matched with then-unknown producer Bangladesh going ham, cheese and mayonnaise on the Triton synths. “You Don’t Want Drama,” their other collab on this LP, is another shoulda-been smash.

Ness “My Hood” (2004)
History will remember Diddy’s Making the Band for one thing: Dave Chappelle as Dylan, Dylan and Dylan. It only adds insult to injury for the MTB cast members with actual talent, like freestyle champ E Ness. His one shot at a Bad Boy single was an uptempo Philly snare monster that could hold its own next to State Property’s best. Yet it was released on a split promo-only 12-inch with Babs Bunny, then instantly forgotten, relegated to my personal mind garden and old Hollertronix mixtapes.

Boyz N Da Hood “Happy Jamz” (2005)
Before Jeezy was a trap rap superstar in his own right, he was part of Bad Boy South’s cocaine-slinging boy band (they even swapped members Menudo-style on their second LP). The majority of BNDH’s self-titled debut is ATL gangsta-by-numbers filler, but nestled towards the end is this somber, Jazze Pha-produced lament—a country rap tune par excellence. Don’t let anyone ever tell you Jody Breeze wasn’t good for something.

Cheri Dennis “Spaced Out” (2008)
Cheri Dennis was the proto-Cassie: Diddy met her at a club and threw her in the studio with Ryan Leslie, yet they could never work out a “Me and U” of their own. Still, Ms. Dennis’ lone LP In and Out of Love is worth tracking down for this absolute beauty of an album cut. Keep trying to convince me that Janelle Monáe is interesting, this is what neo-soul from the future is supposed to sound like on Bad Boy.

Faith Evans f. Freeway “Burnin Up (Just Blaze Remix)” (2001)
If an alternate timeline of rap existed, all Jay-Z’s The Blueprint beats would have gone to the fourth or fifth Biggie album. Just Blaze and Kanye West were rightfully praised for ushering in a soul sample resurgence on Jigga’s near-perfect LP, but it was Puffy’s production team, the Hitmakers, who drafted the literal blueprint for that sound (Kanye even got his start in the biz ghost producing for “Hypnotize” beatmaker Derric “D. Dot” Angelettie). Think of this amazing Bad Boy white-label as a glimpse into that imaginary Crisis on Infinite Brooklyns.