Just outside of Delhi, New York, a small town that still has dime store candy, is Miller Path. It's a gnarled, gravel road with grass that swishes against the bottom of your car when you drive up it. It's also one of those things where you drive and think, Okay, this is where I stop. This is where I'm going. And then it's not. You keep going until you see a cabin no bigger than a gym sauna in the middle of a grass clearing. This is the cabin that Kim Krans and Jonny Ollsin—the husband and wife artists that make up Family Band—built and live in whenever they can. You could fit hundreds of people up there, but it's also okay with just two.

It's a big move to open up your house to a bunch of people, especially when you maybe don't know every single one of them. But after clearing out some of the surrounding land, Ollsin and Krans invited a whole lot of people in even more cars to park their tents wherever there was space. Crystalline blue Christmas lights illuminated pathways, there was a giant projector screen next to a hammock, down the way there was an even bigger bonfire.

But really, people were there for the music. Which, in this atmosphere, was loose. Screw ups were okay, experiments encouraged. Family Band played a set of all new material, testing out songs on the captive audience. It all went over well—Krans and Ollsin's songs exist in the midst of a wooded haze, a sort of ambient, vaguely unnoticeable fog hovering over all their music, pressing down. To see them perform in the environment that formed their sound added an extra layer of depth and intensely heavy darkness. The music they make is not happy, it's full of doubt, but it is certainly beautiful. 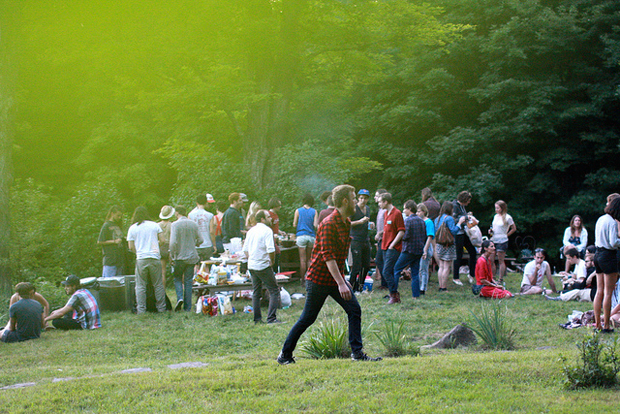 Dan Rossen of Grizzly Bear and Dept. of Eagles also performed a brief set, asking not to be filmed, maybe because he was working out new mateiral. His set included a Townes Van Zandt cover and also a 12 string guitar. Still amazed by those things! How do you ever play that well? If we even tried to touch it we'd immediately drop it. It looks as daunting as complicated math. After Rossen's technical fireworks and Family Band's gorgeously stoic darkness, Matthew Houck, bka Phosphorescent, took the stage with a freewheeling set of...whatever the audience wanted. We were just stoked to hear an extended, sloppy (in an appealing Crazy Horse way) solo rendition of "At Death, a Proclamation." Was everyone buzzed at this point? It seemed like it. Maybe we were all just stoked on nature?

Also included after the evening's musical performances: a bonfire the size of most small buildings, a mysterious performance in the woods that involved a dude standing on a massive stump doing poses and growling into a microphone in-between two torches at like 2:30 in the morning, and the best vibes ever. The rumor is that Krans and Ollsin have plans to do this next year on a smaller, tighter scale. We're all for it, but the looseness of the original is the kind of thing we'll try to explain to our kids and fail really badly at. We're already counting down the days until next year.