The producer is one of the most crucial yet anonymous figures in all of music. In some songs, the producer is both the band leader and the band, yet his or her name is often unknown. Every other week, with Beat Construction, an extension of our column in the magazine, we aim to illuminate the role producers are playing in creating some of our favorite music. This week, we talk with Knucklehead, responsible for some of the heartiest, craziest beats this year—including Gucci Mane's "Scotty"—and undoubtedly soon to be every rapper's go-to. Check below for an interview where he speaks on pushing the envelope, his work with Yung LA and techno. Go ahead to the next page to check out a selection of some of his favorite productions.

Did you grow up playing music? Yeah, I could play by ear. My whole family was pretty much into church with the music or whatever, so I used to always be around it. But I never really had training. I would just play it by ear. I always knew certain notes had to go next to other notes, like I could always catch it. My whole family was into the whole music thing. My grandma sings in church and my grandfather just played the piano. It was just, even one of my aunts used to give all the kids in the city piano lessons. It was always deep-rooted in my family and I just did my own thing with it.

I feel like, as you said, one note leading to the next, is actually not something that happens in your beats. If [my production] is a movie, M. Night Shyamalan or whatever, when you think something is gonna happen, and then a twist happens, that’s how I am with my beats. I just throw them off completely.

How much forethought do you give to make a beat unpredictable? Sometimes I be like, I’m gonna make the melody really happy and friendly, and then I’m gonna drop it into the darkest shit ever. Sometimes I go with that mind, but most of the time I just play around and go with it.

What's an example of how that works? Let me think. Just like [Soulja Boy's] "The First" beat, that started off with the just the light percussion noise or whatever. I was like, Man, I think it would be different if I added a little Pac Man noise and just speed it up through the beat. People wouldn’t expect it because it starts off with the regular Pac Man [imitates theme] and then it speeds up. Sometimes I just like to play, if it don’t catch the listener first. I sent that beat to Little Twist first and he thought the beat was bullshit. Soulja Boy made a nice song with it. It ain’t for everybody. Some people come to the table with a certain ear already and my beats probably throw them off but some people be different. Basically that’s what happened with it.

How much are you trying to push it? I do like pushing it a little. People are gonna remember that beat, like, What is that? Right now, people to me like Lex Luger’s sound. You know, everything has that hard—you know, it just all sounds like him. He came in with a new sound and everybody ran towards it. He is the sensei of that sound, but there are a lot of biters of it. I won’t give nobody nothing to bite on. If they do bite, I’ll know about it. I just try to push the envelope and be different.

Do you think when rappers pass on a beat of yours it’s because they just don’t get it? Yes sir. I think so. When they do pass, it’s because they don’t get it at first or because it didn’t fit the mode they were in, maybe. I think sometimes with the music thing, it’s all about timing. It’s all in how they feel. If they come into the studio and have a mood like, I just wanna do something different, that’s when my track gets chosen. Yung LA really, really liked my sound, and at the time, [his label] didn’t really quite understand it. They jumped on a few of my beats, but some of them weren’t what they were used to.

You worked a lot with Yung LA before his clash with Alley Boy and Duct Tape, and had given him beats for a mixtape that was never released. How does it feel that those tracks still haven’t come out? It’s depressing, because I put a lot of energy into that project. People wanted more of [him], and he didn’t give people what they wanted, so they quickly forgot about him again. It was just like, Come on, man, I’ve been working on this. To this day, I have a random person on my twitter, be like, The only reason I was listening to Yung LA again was because of you.” The chemistry we had, they were just going off our chemistry like, This was the best sounding music we’ve heard in a long time, and now it’s just like, over. It still hit me to this day, like, Man, when are you and LA gonna do something again? And all I can say is, I don’t know. I haven’t even talked to LA That’s basically how he did his fans.

That’s sad. Yeah, he put a super-halt on everything. You know? It really hurt his fans; he let his fans down with that. Everyone was like, “this is the new sound.” Everyone was comparing me and his sound the new Jeezy and Shorty Red and Gucci Mane and Drumma Boy on the hit. We kind of just let everybody down. I hear he’s still gonna drop that Tattoos and Jewelry. I don’t wanna promise nothing. I don’t know about that. I hope for the fans he’ll drop something for them.

Who else do you want to work with? I want to work with Wiz, to be honest. I want to give people a new sound. I can go that direction with my beats. Just laid back smoke or whatever. Currently, I’m starting to do a lot of work with Gucci. I think he’s about to be responsible for breaking my sound to the world more, too. That’s really what I’ve been focused on lately, just working with him. I even sent some tracks to Snoop Dogg, so who knows?

On the geeky side of things, what tools do you use to produce? I use fruit loops, I’m the man with the fruit loops. I’ve been using fruit loops since like, ’04, ’05. There’s pretty much nothing I can’t do with fruit loops now. I use that, I got a whole bunch of VSTs. I ain’t gonna say all that because I know they’re gonna be like, Woo, I gotta get all that. I use a whole lot of virtual sounds, you know. I make my own sounds. I take stuff from YouTube. YouTube is the new TV now; you know you can pause it—whatever you want to take away.

When you’re looking for something to sample on YouTube, what do you search for? Umm, I honestly go look at techno videos. I’ll strip a sample from a techno song, some sort of weird noise that they put in there, you know, in their beat, and I just strip it and use it for myself. You know, because they’re like the kings of the weird, for real. People be thinking my beats are weird but that techno shit is a whole other world. You know what I’m saying? That shit is weird.

Did you ever find anything when you’re looking for beats that you end up really liking? Yes sir. There’s a song, I wanna say the name of the group was the Sunfreakz or something, I can’t even remember. Let me think what the name of the song was. I can’t even think of the name of the song. It was on a mix, that’s how I found the song. You know when you see a ten-minute video? It was like that. It’s a hell of a melody man, I just like that. They do a lot of cool shit with their sound. To me, the techno DJs and producers are so underrated. They really put a lot into their music. All the build-ups and shit, you know, really, they put a lot of work into their music. I pay homage when I do anything that even kind of sounds like it. I like their whole vibe and swag.

Have you ever considered making music like that yourself? Possibly. I have people coming up to me like, Do you ever make dubstep? You know, I ain’t gonna lie. I don’t ever like it. But with this shit I don’t like, that’s the shit people love. It always works like that. There was a beat that I hated, man. That “Burn Slow.” It was just—everybody around me loved it. But I hate it when anybody ever play that shit. 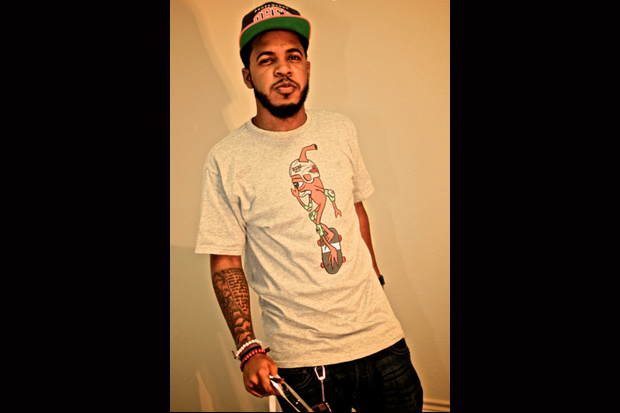