The semester after my sophomore year at Oberlin, I decided to drop out to learn carpentry. Throughout high school I’d been into punk and hardcore, playing self-booked shows across the country with my kind of crappy band. Like most idealistic punk kids, I placed a lot of value on self-sufficiency, self-reliance and cobbling together a life (or art) using limited resources. I’d chosen Oberlin because it felt like the least collegiate of the colleges I’d gotten scholarships from, but even its general encouragement of non-institutional learning and motto of “Learning and Labor” didn’t allay my general skepticism. I didn’t trust or respect my professors, and instead, concerned myself mostly with setting up shows and fooling around at the radio station. I was convinced that college was just a watered-down version of the “city life” I’d known back home in San Francisco—I was wasting my time. My best friend at school, Sam Halterman, felt the same way, so after sophomore year, we turned in our withdrawal papers and got jobs as apprentice carpenters with one of his friends in Philadelphia.

After a few months back home that summer, I took a four-day Amtrak ride to Philly. I got off at the station, rode my two boxes and a suitcase on a skateboard over to my friend’s house, spent my last $75 on a pair of steel-toe boots and dove into my 7AM-3PM, five-to six-day work week, converting an abandoned warehouse into a luxury condo. I quickly learned that I love the smell of freshly cut wood and the sound of breaking glass. I also learned how to build cabinets, install sliding door tracking and endure carrying an appalling amount of drywall up five flights of stairs. Because of the hours, I didn’t go out at night, so I didn’t make many friends my age. I got along with my coworkers pretty well, and, as always, I found common ground through music. Mario, one of the carpenters, would invite Sam and me over to his house in North Philly after work on Fridays to watch MTV and drink Hennessey. The head carpenter, Bradley, was a Pavement fan. Bill, a laborer, was an old New York hardcore guy who would share Sick of It All stories while teaching Sam and me how to lay drywall. And there was Mitchell, a lifelong Deadhead who took up plastering because it was a good way to make money between tours, “no matter how burned out you are.” He told me stories about going to see Ween play Deadhead parties in New Jersey basements. It was a really happy and simple time in my life. 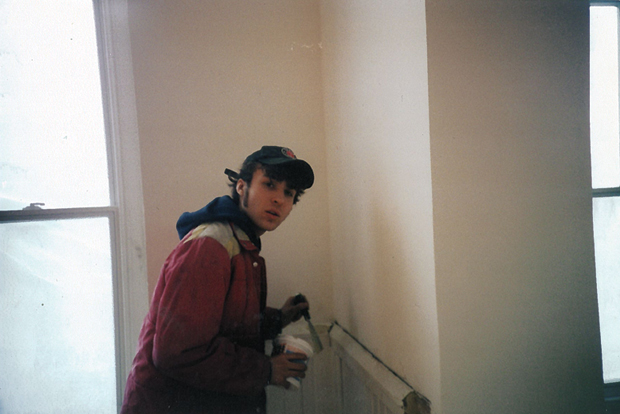 Because Mitchell and I got along well, I would sometimes help him with side gigs on the weekends. One day he asked me if I liked plastering. “Sure, it’s not bad,” I said. He told me that it was a good job and that he was getting older and didn’t have any sons and wondered if I’d want to continue working with him and maybe one day take over the business when he retired. Slightly overwhelmed by the proposition, I told him I’d have to think about it and get back to him. Later that week, I started boasting to the stonemason about how I was “definitely never going back to school.” “Couldn’t afford it?” he asked. “No, I had a grant.” “Flunked out?” “No, I did okay…just wanted to learn to do something with my hands.” At this, he stopped packing his truck, set down his tools and stared at me. “What’s wrong with you? Go finish. If you want to come back, I’m sure you can find a place hauling drywall somewhere…you’re not very good at this, and if you’re doing it by choice, then you’re an idiot.” I took his criticism to heart and actually started to consider what my life might look like 20 years down the road. It dawned on me that I was misusing carpentry in the same way I misjudged college. I’d romanticized what both could be (with carpentry learning how to build some sort of isolationist art-punk cabin in the woods, with college, setting up fun shows) rather than using them as tools for something lasting. The next day, I called Oberlin and asked if I could re-enroll and less than a year after I left for Philly, I was back on campus.

Leaving school to become a carpenter was the first deliberate decision I made on my own in my life. Coming back to college was the second, and remains the one I most value. Despite being a pretty generic existential crisis, dropping out taught me that, for better or worse, you can’t just abandon who you are in one place to become someone completely different in another. Someone is inevitably going to call you out. It turns out my life-defining lesson in labor taught me more about building relationships through music than it did about building buildings. I came back to school having gained a certain amount of self-discipline and confidence from the trade, and I applied that skill to what really stimulated me: music, political science and literature. I not only started to excel in school but also became totally enthralled by it and my professors.

Many people find themselves at college, but few are actually ready to go there. I got completely lost at school, and it took having to leave, try, fail and try again to appreciate what it’s all about. People like to say, “If you do what you love, you will succeed.” But I think I’d change it to: Do what you love, not what you think you love, or what you think will make you love yourself. In reality, I’ve probably made about as much use of my liberal arts degree as I would have a journeyman’s license, but ultimately, it was college that gave me a great set of tools.