Young Dro is swagged, tagged and ready to take off.

Young Dro is the immediate future of TI’s Grand Hustle record label and characterizes his swagger with one very weighted yet very empty phrase. “Everybody’s talking about black boy, white boy this—black boy swag, white boy tags,” begins one of the “Dro Speaks” interludes on the recent Black Boy White Boy mixtape. Doing his finest “white boy” imitation—a stoner growl with touches of Valley girl twang—Dro continues, “Everybody’s getting this shit from some camp called Grand Hustle, you know? I seen these guys, one of those guys is totally rocked out, one of those guys looks like they’re bout to play tennis.” The tennis player in question is, of course, Dro himself, whose extravagant dedication to classic American chic today has him laying out a pair of weathered loafers, patterned polo shirts and golf shorts in plaid, green and snow white variations. Ralph Lauren’s signature Polo player logo, mallet raised to the sky in mid-swing, gallops out from every single piece. “There’s an elegance about it,” Dro says, describing Atlanta’s newest dress code. “But it’s still like, we do it in the ghetto. It looks good, it makes you feel good… It’s something about that horse.”

There’s a song on Dro’s impending sophomore album, appropriately titled P.O.L.O. (Playas Only Live Once), in which he addresses his city’s current so prep and so clean aesthetic. “Niggas come to me, ‘I look just like you, shawty!’” he says explaining the song’s premise. “I be like, It’s all good.” Quickly, his tone stiffens, “Nigga look like a got-damn moose rat!” (A moose rat, in case you don’t know, is an imaginary animal renowned for its hideous appearance.) Polo swag, which Dro claims full responsibility for as often as possible, has recently become a highly contagious Atlanta pandemic, name-checked in songs right alongside money and women as a “this-is-why-I’m-hot” authenticator. Of all the forces that once made a successful rap artist, today, swag is paramount—and Young Dro has it by the rack. On the Black Boy White Boy tape, he and recent Grand Hustle breakout star, the mohawked and Teletubby-cadenced Yung LA, freely romanticize the stereotypes of both the Black and White experiences, equating the extreme style attributes of either—soul power and its country club diametrical opposite—with some kind of charismatic birthright. “When you grow up a certain way, you want to be different,” Dro says. “You want to be more than what they giving you. When I was young I used to want to ride horses. I used to want to play golf.” 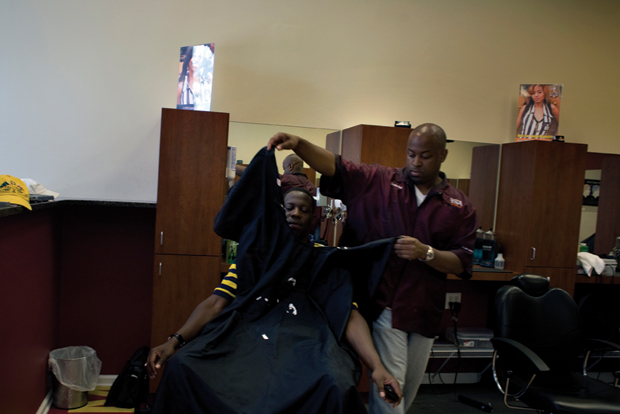 On the southwest edge of Atlanta’s Herndon Homes housing projects, Young Dro is handing out dollar bills to a dozen or so elementary school-aged children. The project is one of many Dro lived in during his adolescence, and the one where he tells me his father could be found “when he was really smoking dope.” Initially, we’d stopped to remove the top from the banana-colored Corvette he’s pushing today, but after the kids ran up bellowing a chorus of “Key lock, key lock!” (their ritual acknowledgement of a nice car), a quick pit stop turned into a press conference. “Where’s Fantasia?” a brave girl asks, referring to the American Idol winner Dro dated until recently. “I’m going to get her now,” Dro chides. At a Shell gas station up the road he tells me that he had indeed brought Fantasia to hang out in those very projects before. While filling up the Vette he cues Coldplay’s “Viva La Vida” on the stereo and spins the volume knob until it stops. Violin stabs blaring, he soaks up smiles from other patrons. The station’s pump jockey headbangs gleefully, accepting the gift of the odd spectacle. Tank full, Dro jumps back in the driver seat, Cheshire-cat proud. “C’mon man,” he says, scolding me for my bewilderment. “Black boy, white boy.”

The day before I meet up with him, I get a glimpse of why Dro’s specific high-low flash and infectious charm have taken hold of a place like Atlanta. I find myself in historic Grant Park for 4th Ward Day, a public yet very communal cookout celebrating the East Atlanta neighborhood. In the parking lot, a small, unmarked freezer truck is discreetly selling ready-made frozen daiquiris. Despite the officers lolling about, groups of men openly spike their drinks with bottles of Grey Goose and Hennessey. The attendees who aren’t under the shade of a large pavilion line the paved trail from the parking lot to the grilling area, forming an aisle of judgment for those still arriving. I spot crosses, g-clefs, diamonds, tears and some other symbols I don’t quite recognize tattooed on a bevy of faces. I’m told the man with the enormous diamond-dipped number “4” pendant hanging from his neck, a man whose face I can barely make out behind red-rimmed sunglasses and a red silk Louis Vuitton scarf draped over his head, is not a rapper. Outside of the eight or nine person entourage that appears very mindful of the non-rapper’s mood, a majority of the crowd sways to a continuous selection of breezy, swagged-out Atlanthems by local heroes like OJ Da Juiceman, J-Money (who is devouring a plate of ribs beside the pavilion) and the city’s current underground king, Gucci Mane. 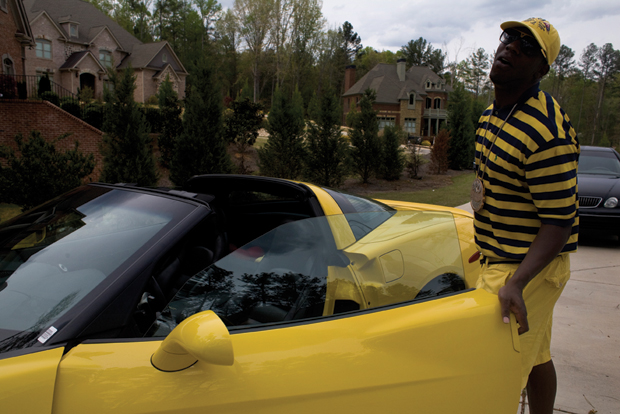 The song that gets the biggest reaction, however, might be the only song that’s also been on 106 and Park. Yung LA’s “Ain’t I (Remix)” featuring Dro and TI was released at the tail end of 2008, yet it still riles the 4th Ward like it didn’t disappear from the BET show’s countdown months ago. “Swagging out” just might be the most appropriate way to describe how LA and Dro lay broad whisper raps over the song’s shimmering keys, warm synth scale and subdued 808. Dro raps, Rims so big, I’m at the tip top, ain’t I?/ Choppers in the trunk will make you do the Macarena.

Hanging around Dro, it’s easy to see why he’s embraced by the Atlanta barbecue scene and beyond. Much has been made of his molasses thick Southern drawl and eccentric similes, but Dro is also incredibly funny. He talks the way he raps, changing tone for no real reason other than to highlight the ridiculousness of what he’s saying. He’ll wring out a joke until he gets the laugh he knows he’s entitled to, even if half the time it’s from himself. “Being from such a black background, you make this bright ass music, you’d think you’d be round here trying to kill everybody,” he says. “But mostly, I just like making music for the masses.” When I ask him about recently going in a more swagged-out direction—singing, rapping and leaning flamboyantly on even the most obvious boasts just to reflect the lifestyle, such as My pockets are cuckoo/ Like the ATL girl I gotta be new new/ I gotta be Lou Lou/ I gotta be Goo Goo/ Louie, Gucci motherfucker, this how I’ma do you on “The Truth”—he’s hesitant to acknowledge what he doesn’t want written off as dumbing down his music to cater to the swag party. “I still got them stupid ass punchlines,” he says. “But the beat is changed and it’s making it more visible. You can see it more. Cause with the dark ass beat, there was
so much shit going on you can’t really hear it. And right now this shit is winning.” 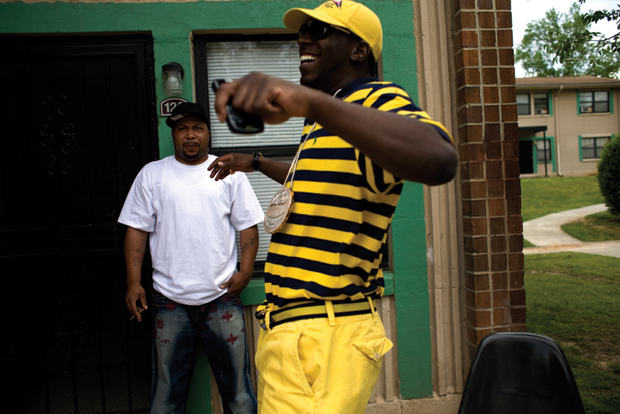 Sitting on a cafeteria chair in the middle of Bankhead Court, the housing project where his grandmother once lived and the place he has the strongest attachment to, Dro starts telling a story about the first time he got shot, an incident that forced him to wear a colostomy bag for a year during high school. “I got to arguing with this nigga, he was talking shit,
so I caught the bus over here and came and got my cousin,” he starts. “I came back like, ‘Okay nigga… And after that day was over, I was shot,” he says, smiling. He talks about scrambling to the hospital as if it were stealing a base in a little league game, and his attitude toward the memory sheds light on a chorus like I don’t know what I wanna do, Its sunny outside, I’ma call my crew/ Go to the mall and freshen up/ Later on, I wanna go to the club. He succeeds not because he thrives off adversity, but because it doesn’t exist to him.

It’s through this same Technicolor lens that he views his career’s false starts, the first of which was a 2002 deal with rapper and Atlanta talent impresario Raheem the Dream’s Tight 4 Life label. Dro first made his name with the affirmative bounce record “Yessir” (Do my niggas ride 20 inches? Yessirrrr!). “When ‘Yessir’ came out, I killed the city,” he says. “There was supposed to have been a video for that muthafucka. That shit beat out Jagged Edge on Battle of the Songs on the radio.” The video never happened, and Dro jumped ship to sign with Rocky Road, the label run by Rocko of “Umma Do Me” fame. At the same time, an estranged childhood friend by the name of TI was seeding his Grand Hustle empire. TI ended up buying Dro’s contract from Rocko, an investment that yielded a much quicker return that he’d imagined. “The first five songs I had recorded?” Dro asks rhetorically. “Stupid! They called Tip while he was out of town and they was like, ‘Boy, we done struck gold!’” 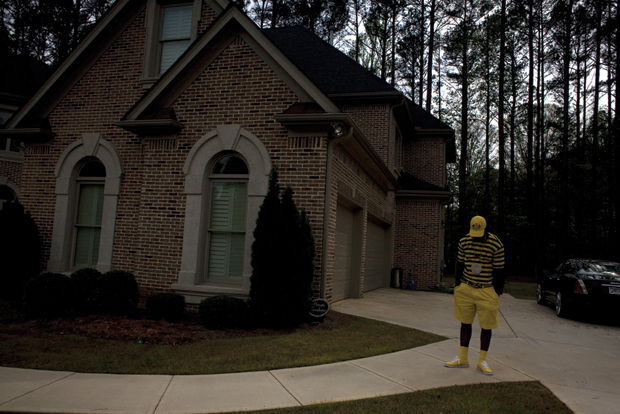 Dro will have to prove his golden child status alone this summer, though, as TI, who’s appeared on both of Dro’s biggest singles to date, “Shoulder Lean” and “Ain’t I,” serves a one-year jail sentence for weapons possession starting in May. And while no one would question Dro’s raw ability, before Black Boy White Boy, he kept a lower profile than most artists in the Nah Right age can afford, time off he attributes to adjusting to a quality of life change. “I was just running around, spending money,” he says. “Me and Fantasia was just tearing up the city, wherever the fuck we was at.” But even as his tax bracket shifts, Dro hasn’t had any problem staying in the street. While he is currently the standout feature on Ace Boon Coon’s weed anthem, “Fruity (Got Me Gone),” and the Rich Kids’ hood to hood salute, “My Partna Dem”—two of the Atlanta club scene’s hottest records by two previously unknown artists—he’s remained accessible even as his profile increases. “I’ll shake ya hand when the next man won’t,” he says. “You tend to meet more people that way. I don’t be stunting nothing.“

While such a statement may seem unlikely coming from a man who matches his car to his outfit, Atlanta’s most prominent style icon keeps it on the humble. “It’s just like Polo,” he says. “I didn’t make this shit. I just put it on. It’s just the way I wear it.”