You’re born. You learn to walk, use a fork, make prank calls, kiss with tongue, tell a lie (not necessarily in that order). And, eventually, you go to SXSW.

In the weeks building up to the festival, your inbox starts filling with press releases, oddly phrased publicist inquiries from foreign lands, messages from the festival detailing rigid protocol—in short, noise. There seem to be tons of rules to attending SXSW, and hefty penalties incurred if you break them (replacing a lost badge, for example, could set you back nearly a grand). It’s basically the festival version of your grade-school friend’s hard-ass mom, the one who was super paranoid and insecure, and wouldn’t allow junk food in the house. But who can blame them? When you’re trying to pull off a caper as sprawling and dense as this, you need to have your rules in place, or risk total anarchy.

Still, it’s easy to lose sight of the point here, which is still the music. Tuesday night at the Belmont, prolific DIY folk hero R. Stevie Moore plays the party celebrating Daniel Johnston’s new graphic novel, Space Ducks. Moore’s bushy white beard and fishing getup—safari khakis and matching hat—remind us what mall Santas are up to in the off season, and in between unfocused cursing and non-sequitur incantations of “Netanyaaahuuu,” he tosses off a gem of a tribute to Johnston with a cover of “Cathy Cline.” Over at Club 606, Beach Fossils takes the stage and instantly whips the sweaty group of youngsters into a delirious froth. And for anyone wondering what Dorian Gray is up to these days (yup, we just dropped an Oscar Wilde reference), it turns out he’s drumming for Beach Fossils! Apparently he’s going by “Tommy” these days? So that’s cool. 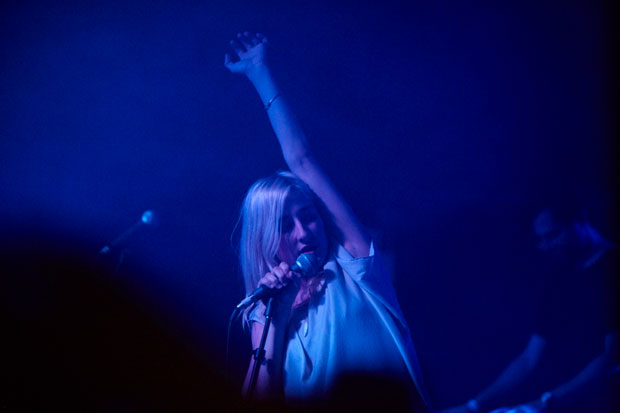 On Wednesday afternoon, Andrew W.K. is gazing out the window of the ground-level bar at Maggie Mae’s. In a few minutes, he’ll change into his customary dirty whites and head upstairs to play a party for Let’s Big Happy, a new web series he stars in. James from the Gay Blades takes the stage with some big, bad bar-rock, and pretty soon W.K. joins him on drums. While bashing through it, the stool collapses, taking W.K, with it, but the poise of the party monster is unflagging and he literally doesn’t miss a beat.

At Elysium, the room is packed for Zola Jesus. We spot Wymond from the Fresh & Onlys outside on the patio—he opened the night with a solo gig. Together we regard the current of bodies passing along Red River, and he remarks that he’s looking forward to quitting the melee tomorrow for a quiet dinner party with friends. Sounds pretty good, but we must press on. 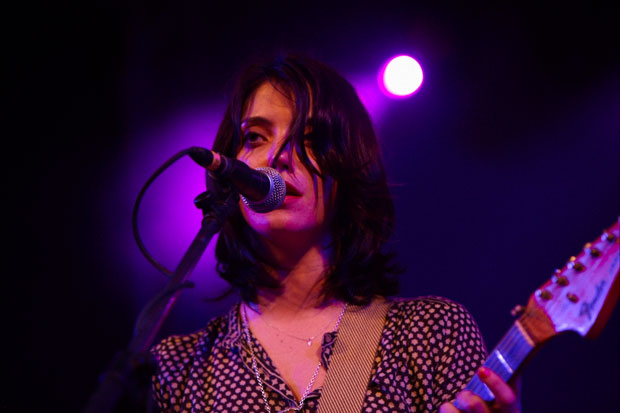 We queue early to catch Sharon Van Etten at Stubbs—so early that we unwittingly find ourselves in the audience for Fiona Apple’s first show outside L.A. in forever. The otherworldly waif with earthy turbo blaster pipes has a new album coming out, apparently, but seems as poetically erratic as ever—smoothing her hair, skulking across the stage, sipping often from her teacup, alternately purring, belting and yelping. Women in floral hippie skirts sway from side to side in rapturous awe. This is their happy place. 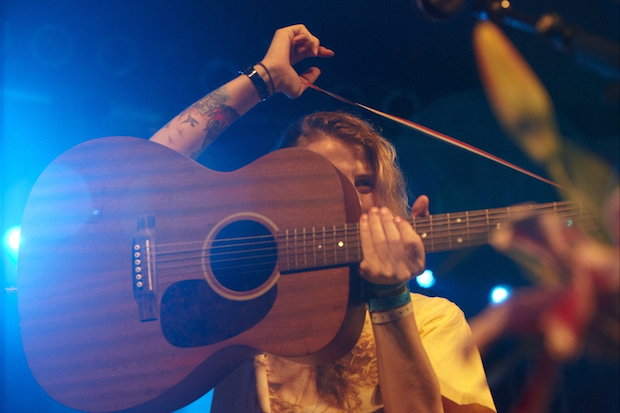 Two blocks off of 6th Street on Wednesday afternoon, it sounds like the apocalypse. The unholy stew of muddy noise—hardcore, EDM, acoustic, rap, indie rock—makes you shudder and walk faster. That’s the sound of dozens, possibly hundreds, of bands playing simultaneously within a mile’s radius, plus the drunk people who love them, plus the sirens, plus the ringing in your ears. But walk a few blocks more and the streets are silent. Abandoned, even. It’s just you, the 60’s-era institutional architecture of downtown Austin and the soft Texas breeze. Such is the weirdness of South By.

Everywhere you look at this festival, you see inexplicable shit. In an empty corridor of the Convention Center, two people sit tinkering at a table overflowing with Lego parts. A cowboy in gold lamé sidles through the bar of the Driskill Hotel accompanied by a dude dressed as a giant teddy bear. Rooney Mara appears at shows all over town, trailed by cameras (she came by the FADER FORT, too; apparently, they’re filming a Terrence Malick movie).

Depending on whom you ask, the golden ticket for Thursday night is definitely Springsteen, or Lil Wayne, or Girls, but when you score one of the coveted seats to the Boss, as we did, it’s a no-brainer. Springsteen and the E Street Band are playing the spanking-new Moody Theater, which seats fewer than 3,000 people. Compared the stadiums these dudes usually play, this place is foolish-tiny.

The show is electric insanity. Bruce comes out in his adorable little black vest (over black tee, natch) and dominates the room like the salty prole god that he is. He crowdsurfs, cusses joyfully (“It’s fucking crazy here right now, like some teenage junkie’s wet dream!”), wails on his harmonica and engages in sing-offs with Stevie. If you haven’t checked in with the E Street Band lately, please do, so we can talk about this. Are they a gang? A brotherhood? I’m sure at this point they can all sprinkle pulverized diamonds on their cornflakes, but you wouldn’t know it from the down-home, right-on, genuine joy they seem to get from each other’s company. By the end of the night you want to go back to their clubhouse and throw dice, smoke loosies and sing Woodie Guthrie songs (we’ll play the washboard!) until morning comes and everyone heads to the factory to work for their pensions. Goddamn. 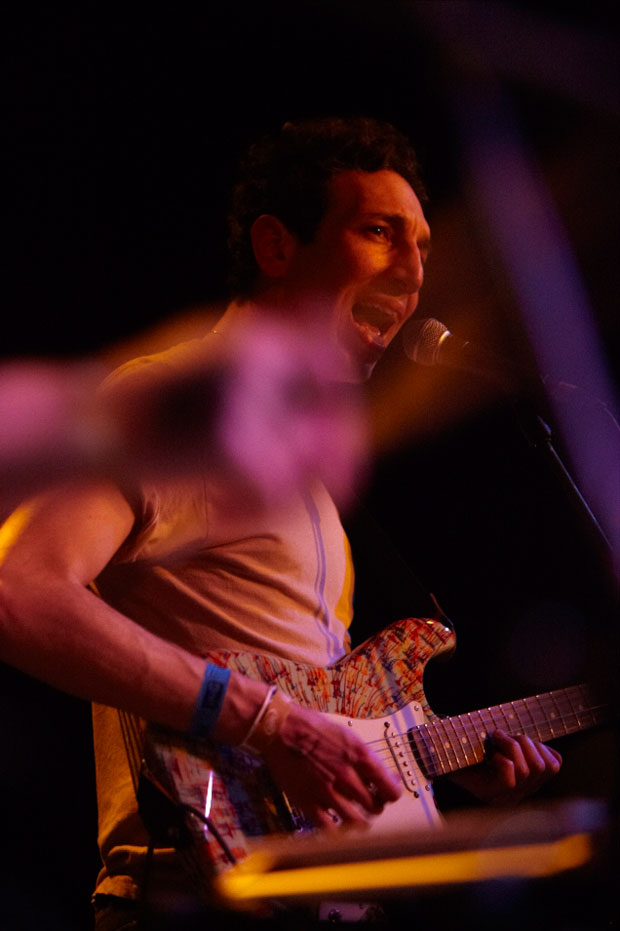 Friday yields lots of bright spots, too—most notably Tanlines, who blow a 10PM set at ND out of the water—but it’s super uncool to put anyone in the wake of the Boss, so let’s pause here and tip our beers in reverence.


Austin, we have learned so much about you. We have walked many miles in your streets. We have stumbled upon —and let’s be honest, into—the perfect subterranean bar with old-timey jukebox. (It’s called the Cloak Room. Go there.) We have also learned much about ourselves, for example that we hate talking to people wearing sunglasses, because where are you supposed to look? And yes, we have gorged ourselves stupid on music. 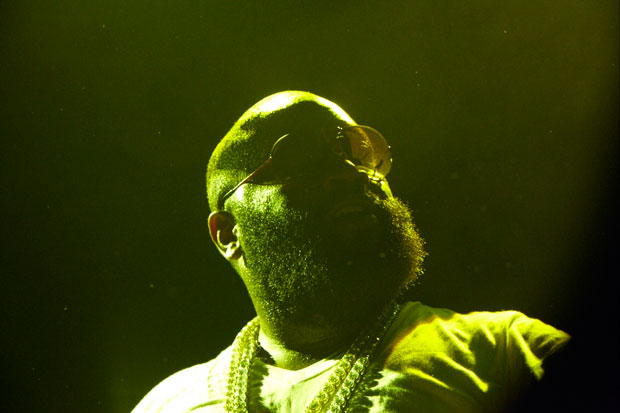 Saturday is overcast and windy, and the FADER FORT is abuzz with anticipation, which is what happens when you strategically deploy the words “special guests.” At 5 things are relatively mellow but by 7 we’re in a full-on Gremlins situation, with a full, booming house, and a VIP population that has instantly doubled—there’s Solange Knowles, bopping around in a summery skirt! Everyone’s starting to get loose on their 13th Bushmills Arnold Palmers and MMG scion Stalley has hyped us into delirium. By the time the evening’s mystery guest—Rick Ross, y’all, the cat’s out of the bag—hits the stage, it’s sweaty, stanky pandemonium. Rozay’s sweating, too, periodically taking off his red-frame shades to daub his glistening brow and tossing the used towels into the crowd for DNA-soaked mementos. An unamused security dude in a suit looms on the stage doing his best Fruit of Islam, hands clasped, eyes scanning the crowd, while Ross hammers into his hits—“Hustlin,” “Ima Boss,” “BMF.” Hopped up on goofballs, an overzealous fan bum-rushes the stage toward the end of the set and is swiftly dispatched. Poor dude. And then, suddenly, finally, it’s all over. 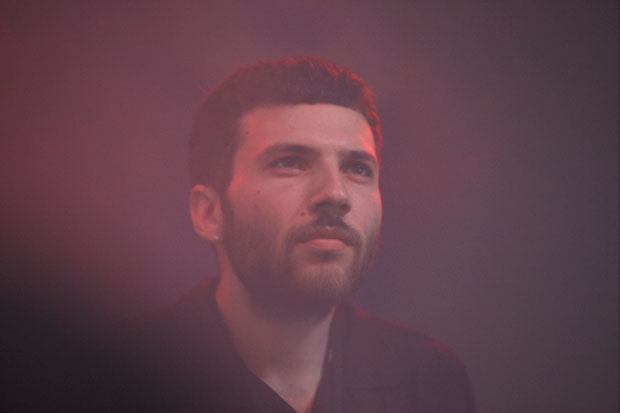 The crowd splinters off into the night—Rick Ross back on his plane, the rest of us mortals trudging to the yard at Cheer Up Charlies to ease withdrawal at the True Panther/AdHoc party, where Teengirl Fantasy, Nite Jewel and AraabMuzik will send us off in style. As we exit the now-empty FORT, the wall-to-wall carpet of crushed beer cans confirm a good time was had by all.