Every week a different FADER staff member will pick a clothing item or accessory that he or she has lately been spending a lot of time with—or would like to—and write a little love letter to it. We would’ve done a column on who we’re dating but that seemed a little bit much. This week Naomi talks about her Isabel Marant romper.

One summer in Portland, Oregon, I worked at Anthropologie. In the dressing rooms, even without the promise of a per-sale commission, I tried to sell as many outfits as humanly possible, because I enjoy competing and because it is nice to talk to people and cheer them on a little bit even if the game is shopping for sailor shorts. Pushing tea party dresses and fancy mom jeans, I'd say things like: "You'll wear it at so many weddings," "This color is so versatile" or "It's an all-day look." These are the same statements that were erupting in my brain when, more recently, I laid eyes on this Isabel Marant silk-cotton one-piece that is, I should say, so far out of my price range and typical spending habits that someone from my credit card company called after I bought it, just to check in, since that didn't seem like me at all.

The funny thing is, this would be a horrible thing to wear to a wedding. An immoderately relaxed pair of shorts with a scoop-neck bib attached, masquerading as a dress, its armholes plunge toward the waist on both sides, exposing extreme side-boob. There's a silly overall-type strap in the back and the whole thing flops away from you. Katie Holmes was spotted wearing it recently in Louisiana, and Star put the photo on their cover as evidence that she was pregnant again (Holme's says she's not). In their 2012 Style Bible, GQ tips guys to buy some Isabel Marant pieces for their girlfriends, saying, "girls wear Marant as much for themselves as for you." Half true to form, the dude I live with is not a fan of the jumper.

Still, I've got no regrets. Shopping with your gut doesn't always work out, but it really can. With this on, I feel just on the line of professional and stoned, dressed for a party and dressed for bed, and right at home. I've been putting in on about three times a week and it's not even summer yet. When those 90 degree days come, this will be easy to bike in and will camouflage sweat beautifully. I've been wearing it with a cropped leotard top, but also like it with a loose, light tee. I've been wearing it at home over leggings, like some kind of 14-year-old musical theater student, happily and without ever having to over-think anything. 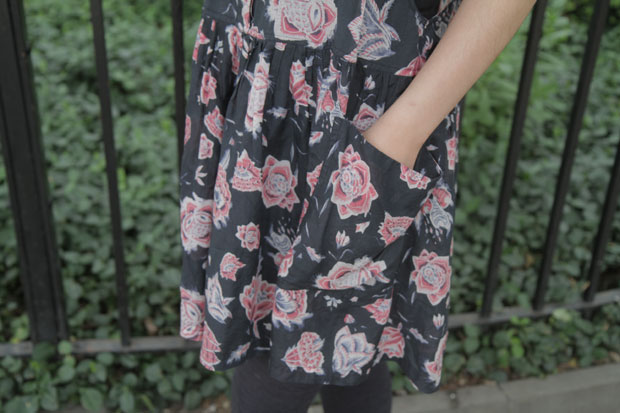