The Wild Unknown’s Forest Party happened Saturday night in the woods by Delhi in upstate New York, at the house that Family Band founders Kim Krans and Jonny Ollsin built by hand. That is not a metaphor. It was the second year running and the lineup of performers included Toronto-based revelation Jennifer Castle, warbly Department Of Eagles dude Fred Nicolaus, our hosts, Family Band (Krans and Ollsin plus Scott Hirsch and a drummer Ryan Berg) and Jerk With A Bomb / Black Mountain / Pink Mountaintops inventor, Stephen McBean. Oh! And a teenage opener, Lula Hyers, who sang "Wild Horses" so sultry and dreamy in the improvised rock-wall amphitheater that we all just about drooled.

Family Band's forest is a skinny tree place with plenty of room for walking and for light to filter down. Saturday, when the crowds came, the woods were populated in such a way—with wandering-around humans making small talk and tents—that it was like we were all gorillas again. But not in a romantic way. In a plain, matter of fact, "there are enough of us walking around in the woods without purpose that it seems like we just live here" way. 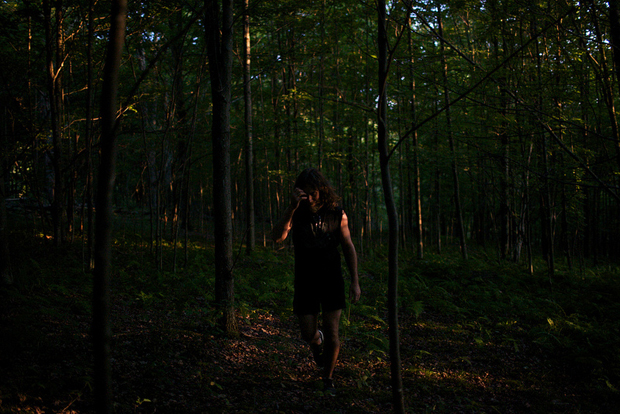 Thursday, before anyone arrived, we built benches into the trees, I mean drilling right into the trunks. It looked like an Ewok village at the end. McBean himself spent half the next day hunched over a shell of a stage, securing straight new boards to the frame, while humble folk-viber Castle broke fire sticks in the woods and Nicolaus ran scales on a beautiful hollow-body guitar 20 trees down to the left.

Krans and Ollsin were in the thick of it, keeping us on task and communicating by walkie talkie, breaking eggs and clearing trees and dreaming up parking arrangements. After dinner they kept whiskey campfires on track, slipping quietly into no-cheese singalongs and forcing the guitar into everybody's hands, one after another, for a turn. The first night, McBean gave the weekend its theme song, covering Sinead O'Connor's "Black Boys On Mopeds," giggling hard at the high parts. The next morning Sinead played on repeat on the work radio, and her protest song came back again as the night's encore. 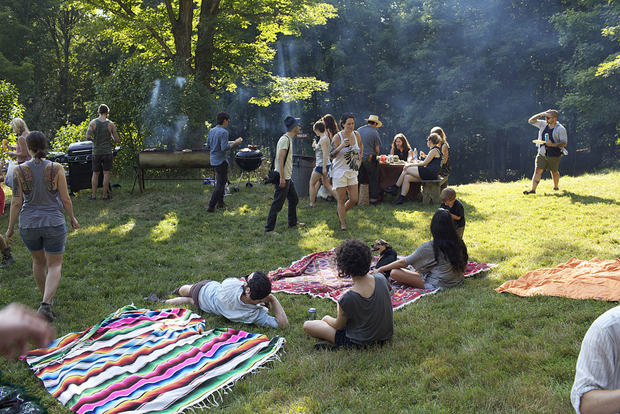 After the bands, a flower-garlanded bonfire taller than the trees went off and the hand-painted #forestparty sign went with it. Behind the fire, back in the woods, New Villlager croon-king Ben Bromley lead a primitive drone hour in a clearing decked out in Andy Goldsworthy-inspired stone stacks and moss hangs. Bromley sat cross-legged on a stone altar at the center and called the whole scene a vortex, but you would've thought more of church or the TV show Ancient Aliens.

People came from all over—as far as Oregon—to flop out on the lawn with plates full of potluck salads and grill-food in a field full of pretty girls with dresses on and naked babies attached. Sounds all hippie dippy, yeah, and I guess it kind of was. But it was way mellower than you're imagining. Despite the small-time circulation of a new drug that was advertised as "a mix of acid, mushrooms, weed, MDMA, DMT, pills and pot," and the port-o-potty lines, all the usual try-hard trappings of a music fest were nowhere to be found. It was an easy time, even back in our tents after the music. A sweet time and a family time, with no distinguishing start or finish. 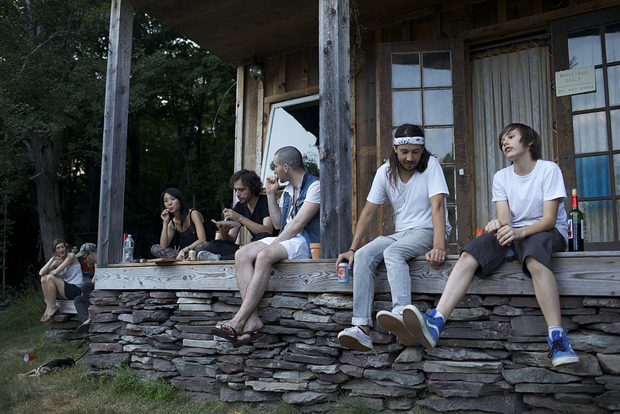 An hour or so into Saturday dinner, with the fireflies just getting going, Krans and Ollsin stood on their porch and called a blissed out crowd of old friends and strangers to attention. They announced that the music would be starting in about half an hour at sundown, and would you please clean up your plates and trash, and most importantly, they told us that the Forest Party coincided with the six year anniversary of their marriage. A loud smiling whoop went up throughout the crowd who'd come to celebrate, like real big actual smiling all around, and man, in all the years of handmade albums and shows, "Family Band" was never so true. 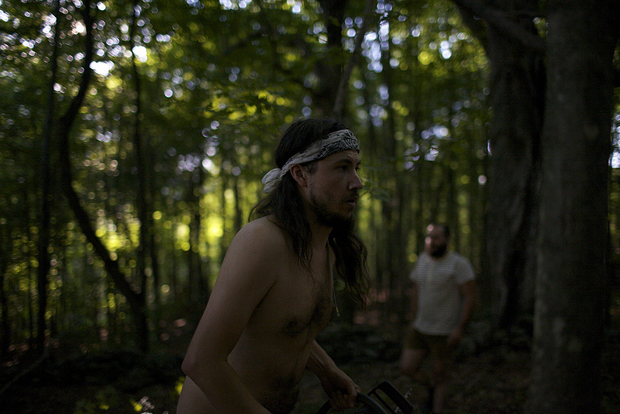 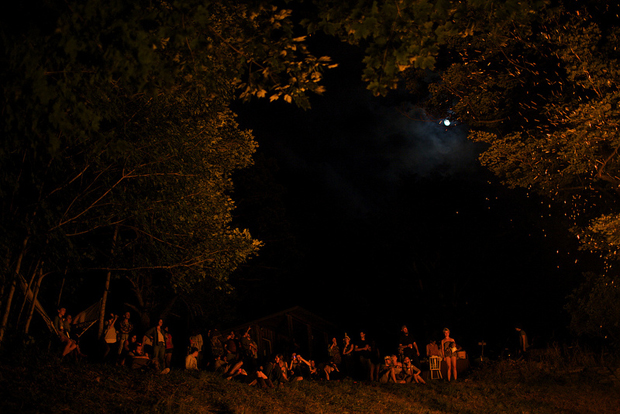 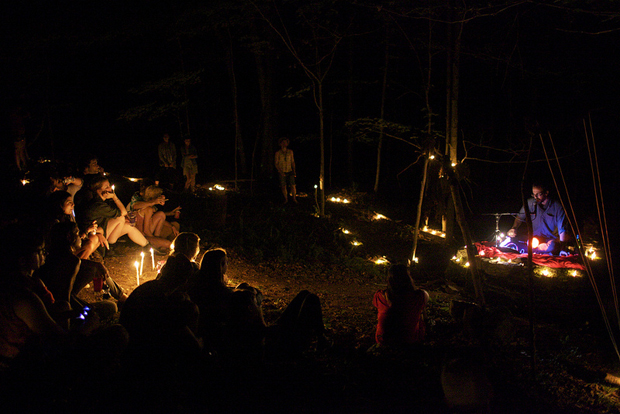 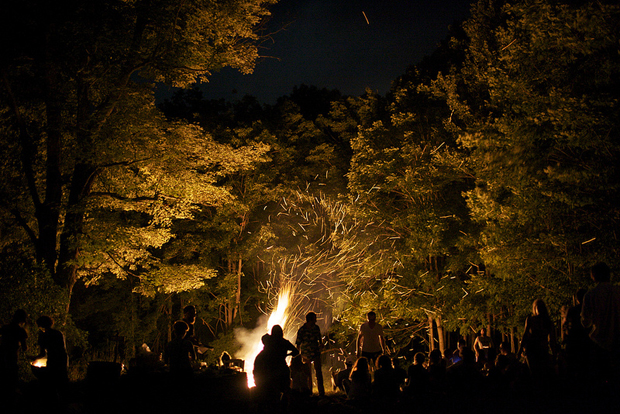 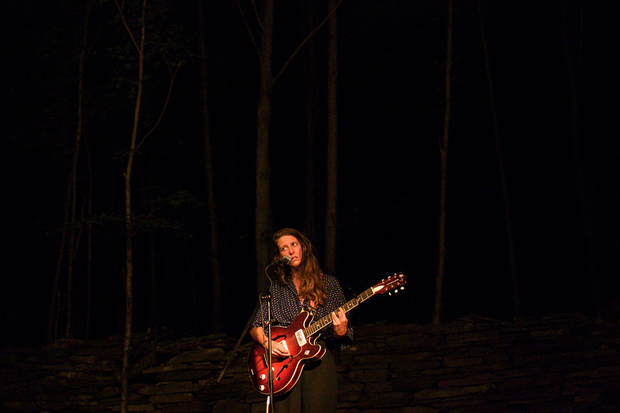 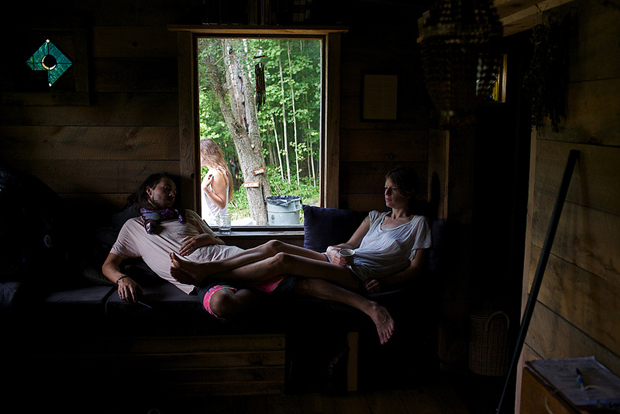