While Clark’s desert boots are worn by everyone from Jamaican reggae stars to smartly dressed fashion editors in Milan, few know that the ubiquitous suede shoe has its roots in the sleepy coastal town of Swakopmund, Namibia at a tiny company called Schier Shoes. Founded in 1938 by Ewald Schier, Schier Shoes is the main producer of velskoen, or “vellies” as they’re known colloquially, the African predecessor to the desert boot. Under the watchful eye of Herbert Schier, Ewald’s son, and Kyle Tregurtha, a close family friend, Schier Shoes is setting out to bring the true heritage brand to America with bright new colorways and a collaboration with Opening Ceremony. Tregurtha explains how they’re bringing their homegrown renown worldwide while expaning the definition of what a desert boot can be.

The town of Swakopmund is famous for two things: bacon banana pizza and vellies. Up until 15 years ago, it was the tiniest, sleepiest fishing village. You could be there in the middle of the week and only see one person walking down the street. Herbert’s father Ewald arrived in Namibia in the late 1890s. My grandparents have lived in Namibia for the last 50 years. So our families have been around each other for a long » time. My grandfather and Ewald were both shop owners in Swak-opmund. They mixed in the same circles and traded goods with each other. To this day, when Herbert walks down the street people call him “Mr. Tannery,” because they remember that his father opened up the first tannery in Swakopmund. When the tannery closed down, they were left with just the workshop and they shifted the focus from leather goods to shoes. Each time I visited, I came home with a new pair of velskoen. They were a big part of my childhood. The vellie is a cultural relic for South Africans and Namibians in particular, but once you buy a pair, they become a relic for you too, a part of your story. Vellies gain character with time. They age with you, go through milestones. 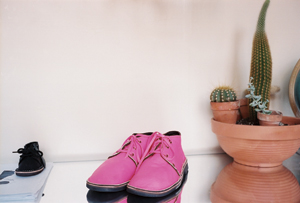 There are just a handful of gents that make the shoes every day. They’ve been working in the shop a long time—fathers and sons. We only use kudu leather, the hide of a wild antelope, which makes for incredibly durable suede. Kudu is just inherently a kind of leather that doesn’t need a lot of care or brushing. There are about a million kudu in Namibia and even more in South Africa. But we work with a group of farms there that are in line with official protocol to collect the wild leather and help maintain the environment. We’re trying to update things, make them look new, without losing the Namibian spirit. For fall, we’ve been playing around with a lot of really great treated kudu leathers that remind us of the environment. Just south of Swakopmund there are these wonderful salt pans that collect gorgeous flamingos. At a certain time of year, when the salt pans dry out, there’s an iridescent black algae left behind. Nearby, there’s the desert scarab that has these huge horns, really stunning. These two things were inspiring us and we found this amazing iridescent leather that recalls both the black algae and the scarab’s shell, hues only found in our environment. So we’re bringing that to the world.

I’ve heard it said that Africa is “on trend” right now. I hope it lasts longer than a trend though. We’ve been here a long time, and we want to be here longer. I grew up seeing these shoes and taking them for granted, not really thinking of them as something that could be fascinating to others. Now we’re stocked in major retailers from San Francisco to Japan. It’s awesome to find out that Prodigy from Mobb Deep owns a pair of our cheetah-print vellies, but we also want to build something here in Africa. It’s always been our goal to have the gents work at a higher standard and, as we grow, have more workers come in and increase the skills and capacity development for this kind of industry in Swakopmund. People will always be interested in products that will last a long time. I hope this is just the beginning of people really experiencing Africa. 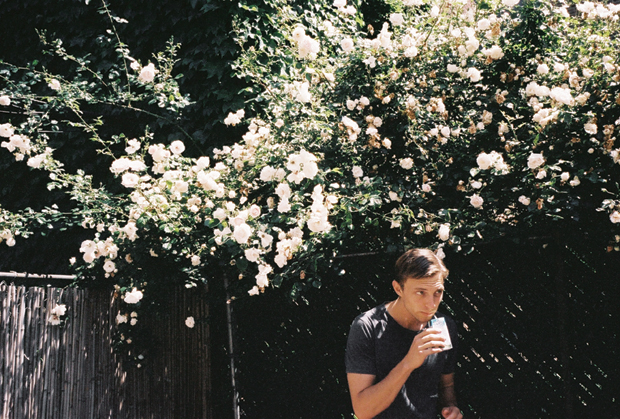