Every week a different FADER staff member will pick a clothing item or accessory that he or she has lately been spending a lot of time with—or would like to—and write a little love letter to it. We would’ve done a column on who we’re dating but that seemed a little bit much. This week Emilie talks about Isabel Wilson's Opera Scarves.

I spent most of my teens walking around the East Village, listening to Marquee Moon and admiring the old school, slightly androgynous counter-culture types who still dressed in the same black skinny jeans that they’d been wearing since their twenties. Style-wise, I think it rubbed off on me, and dark, well-fitting, ultra-simple clothing is still my favorite look. It’s nice, though, to work in a little color sometimes, especially when the weather goes to shit. Brooklyn artist Isabel Wilson makes large, eye-grabbing, 100% silk scarves that are pretty much the perfect supplement to basic New York black. Some of the designs, like this one, a picture of a tantalizingly green patch of grass she found in a park in Greenpoint, are inspired by the idea of camouflage, and feel kind of like an understated take on the photorealism trend that was popping up on some runways this past fall (another one, which I really like, makes the geometric fronds of a plant look kind of like tie-die). The camo scarves are a collaboration with Chen Chen, but Wilson also does digital and silk screen reproductions of her own, softly swirling, lava-lamp-like paintings, which I think is extremely cool, because you’re literally walking around wearing a piece of art, but you’re the only one who knows that. Grab an Opera Scarf via ReedNYC, Wilson’s textile design studio. 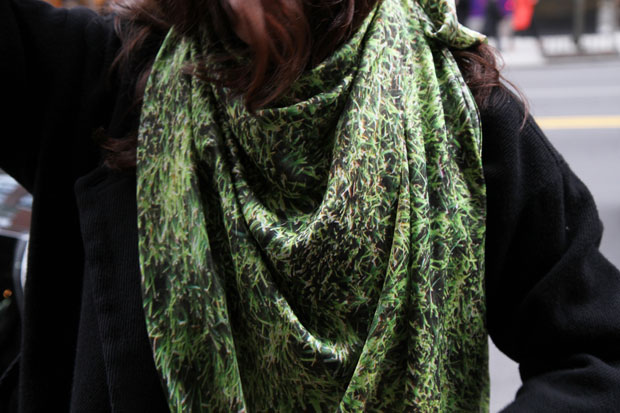