The softest T-shirt you'll probably ever own is made by Tender Co., a little British clothing company run by William Kroll that's dedicated to producing jackets, jeans, sweaters and tees through the finest handmade techniques and with the finest handmade materials. He calls his attention to detail "nurturing," and that's the truth—if you take the time caring for cotton, as Kroll fastidiously does, it'll grow into a gem. Last year, Kroll expanded beyond clothing to open up an online shop called Trestle Shop, dreaming up a variety of curiosities (whistles, teddy bars, mugs, candles, pots for plants) and then roaming England to find out the best way to make them. Here, he explains a few of his processes and why making products locally is so cool.

Tell me about how the shop got started. The shop is run out of a room at home, and I thought it would be nice to have the idea of actually just seeing products as if you were in our house. They’re shot on the table, they’re shot from the angle that you’d be looking at stuff, and I’ll put on a scarf and take a picture of myself. It’s a window into how me and my wife Deborah use the products ourselves. And it’s a way of creating a wider world around the brand, and bringing in new things all the time while the main collection is basically seasonal and drops every few months. With the shop, [even] if we can only make one of [something], or if the cost is too expensive to take it through a wholesale set-up, we can just try out little things and you can sort of get a feeling for how we live. 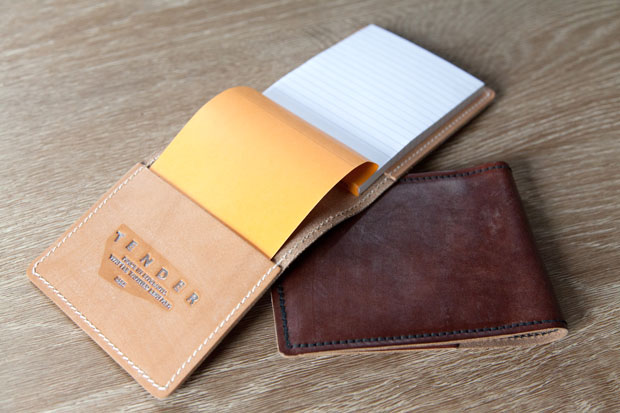 And you personally commission all the products to be made. In general, I do design everything and it’s all made specifically for the shop. The little notepads, for instance, are made by a factory that has a contract with the London Metropolitan Police, and these are there policeman’s notebooks. But for the police, they make them out of less expensive, split-grain black, sort of plastic-y leather, whereas these are made out of leather that is toned to my specifics. Now I’m getting leather tanned. It’s been growing up and I’ve been getting further and further back down the production line, so it’s more and more special.

How did it become so important for you to pursue all of these really specific ways of making things? I’ve always been like that in a way. Both of my grandfathers were very important to me, so it’s really taken way back. My paternal grandfather was in magazines; he was an editor at Vogue, so he had this creative, good taste side of things. And my other grandfather was a scientist, and after he retired, he made a lot of stuff in his shed. He was very unimpressed when I talked about design, but he was much more interested in it if something worked and was well put-together. He wasn’t interested at all in what color it was or what shape it was. He used to talk about tools being the perfect bits of design. So I guess it’s a combination of the two grandfathers: thinking about how things look and thinking about how things are made. 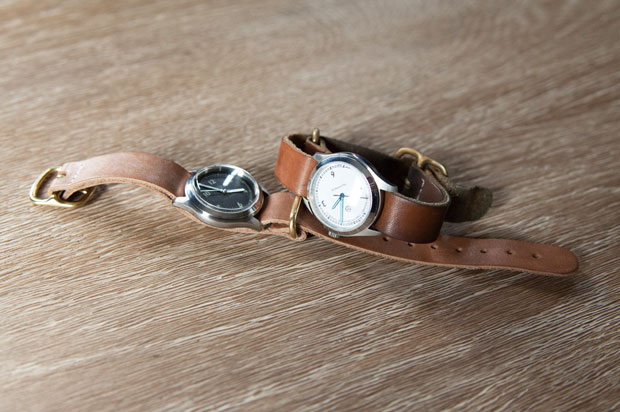 Tell me how the watches are made. I’m really into watches, and I could talk about them for hours. I don’t have very many watches, but I’ve got a few, and they’re all hand-wound. So as opposed to being mechanical, you actually have to wind them up every day; they can just about go for 2 days. I really like that, and it doesn’t take long, but that little interaction I actually find really nice.

Are they Swiss? They’re unused vintage mechanical movements, which have then been stripped-down, cleaned, and rebuilt in England. So the Swiss movement has been built up in England, cased in England, and then with my dials and oak leather straps and my solid sand-cast, solid brass hardware on them. The fun thing with these is that when people switched from pocket watches to wristwatches, which was around the 1920s, quite a few companies made wristwatches for driving [with the clock faces] at a 45 degree angle, so that you didn’t have to take your hand off the wheel to get the time. So we recreated that.

Did you just sketch the sun glasses, or are they based off an old design you liked? A combination. And there’s this hole in the back, with a string to keep them around your neck. I’m from Oxford, and in Oxford, people go Punting. Punting is going on these really long boats on the river and rowing with the really long poles. I was with some friends and we were punting, and my sunglasses fell of and I obviously never saw them again, so strings were a good idea. And then I thought that, rather than have the strings that stick on, which are kind of horrible, just drill a hole through the end of the temple. And the strings are the leather from the boots that we do, and if you cut them off, it leaves this nice little detail, just this hole at the end, which is unusual and sort of cool. 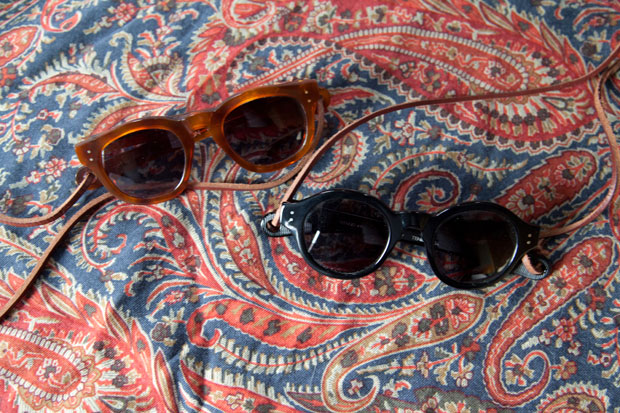 The stuffed animal might be my favorite piece. I met this guy, he makes stuffed animals and I asked if we could do something. It’s made from natural black sheep skins. I made black sheep skin vests and mittens a couple seasons ago, and I had some skins left over, so these were tanned for me in England so they’re thoroughbred in as local of a region as you’d like. They grew up in the UK, they were tanned in the UK. They’re hand--sewn, sewn with a needle and thread, which was really hard because sheep skin is a lot thicker than the fabrics that he’s used to working with. It’s a real animal shape, rather than being too teddy bear-like, which is nice and I think gives it a different personality, and then it’s stuffed with wood shavings and steel shot in the bottom of the feet, which gives it a real sort of bounce to it. Those are hand-embroidered, nice little glass eyes, and the reverse suede side of the skin used for the paw pads. It’s just nice to be able to do this kind of stuff; it wouldn’t necessarily make sense if you were a fashion brand and doing big, high-level catwalk stuff and wholesale stuff, but by being able to have the shop, we can bring in this level of personal side things.

It’s so crazy to think that a hundred years ago, any shop that you’d go in would be filled with hand-made, local things, just like this. I just read this article in Fortune by this economist on how the next 20 or 30 or 40 years are not going to be so much about globalization as about local economies and local cultures. I mean, I guess I’m not an economist and I don’t know, but it’s interesting to think about once the Internet gives you everything everywhere all the time, then eventually that’s not interesting anymore. I’m not saying that that’s going to go away, but once you have everything anytime, you don’t necessarily want to anymore. Then you start looking around closer to home or you start looking at things stepping outside of that somehow and then doing something more particular. I mean, I hope so anyway.