Live: LE1F and Danny Brown at the Knitting Factory

Last year, after the release of his incredible Dark York mixtape, when lots of folks on the internet were busy trying to back LE1F into some kind of "gay rap" corner, I remember thinking that he actually had more in common with the talented, heterosexual weirdo Danny Brown than the homosexual musicians he was getting lumped in with. It's not necessarily that the two rap similarly; Brown's voice is sharp and raw, LE1F's is buzzing and sly. Both of them, though, are pushing the boundaries of rap in similar ways: Brown's subject matter might be pussy and LE1F's dick, but they're actually united by sex, not divided by it. I like to think of them as ambassadors for a kind of new, nasty swagger built on honest lyrics about fucking and drugs and disgusting things and dark times and just being out there—heros for end-of-days, Rome-is-burning culture. Whether it's Brown rapping about how feminists give him a boner or LE1F rapping about chasing white boys around the club does not matter. What does matter is that they're doing something different, and that thanks in part to pioneers like them, we can talk today about topics and taboos, gay and straight, that we couldn't in 2012 or 2011 or 2010. 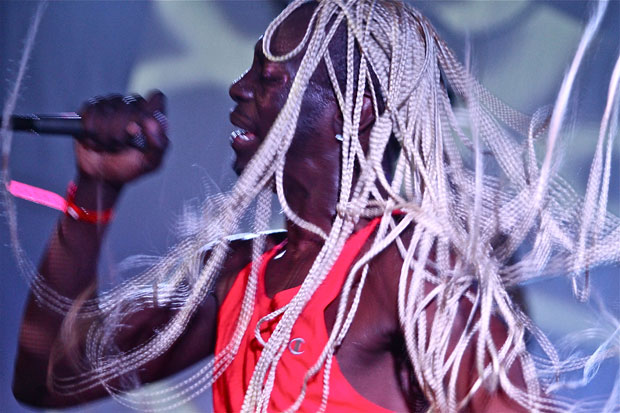 That's why it was so cool to see the two of them on a bill together at the Knitting Factory, thanks to the prescient promoters at AFROPUNK and Red Bull Sound Select. After sets by Oxymorrons and The Skins, LE1F came out in fire-engine red Hood By Air, his pretty new blonde braids coiled tightly up on his head up in a bun. At first he seemed uncharacteristically demure, speaking little to the crowd and breezing through songs from his newest mixtape Fly Zone, including its catchy first single, "Coins." But four tracks in is when he popped off, removing his T-shirt to reveal a skimpy tank top and freeing his hair so he could whip it around better than even Willow Smith ever could. Looking like a blonde, twisted 2013 version of My Little Pony, LE1F performed to what seemed like a mostly straight crowd that rapped along with every word when he finally performed his breakout single "Wut." That song is so good—it might be unnecessary to call out an artist's trademark song since its success means that everybody already knows it's great, but "Wut" never ceases to sound new and weird and progressive. 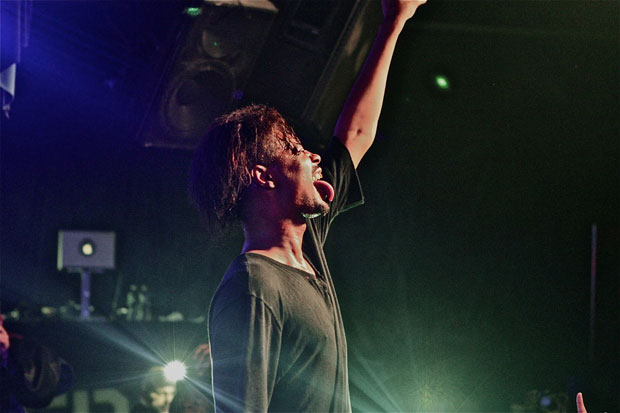 Danny Brown was dressed pretty similarly to LE1F, with a slinky, chest-baring bodycon black T-shirt so long it was almost a dress. He's given up on Jeremy Scott, it seems—even in all black, he's still the biggest freak around. "We're having fun, ain't nobody tripping. I'm drunk. I'm high. I'd like to be a little higher," he announced to the crowd after performing "Black Brad Pitt," as though this were the only thing that really mattered. Then he went into "I Will," and had the entire audience, girls and boys alike, rapping along to his ode to eating out a girl. Again, I realize that the song's repeated chorus—What he won't do/ Bitch I will—is not just about sexual acts. Because if other rappers won't take it where Brown does, he will. "I like to talk about fucking bitches and doing molly but I'll still fuck your favorite rapper up," he said. "I can still rap! But it ain't a rap show, it's a party. I'm not trying to show you how good I can rap. You already know that." He finished with his new song "Kush Coma" and made a final request that everyone put their middle fingers up. When the crowd complied, it was obvious that the audience gave about as many fucks as Brown does. And that's awesome.