There may be no better venue for a performance of “Oktophonie,” the work by the late German composer Karlheinz Stockhausen, than New York’s Park Avenue Armory. Under his aural guidance, the Armory’s immense 55,000-square-foot Drill Hall—one of the largest spaces of its kind in the city—transforms into a three-dimensional sonic canvas of enormous proportion. Experiencing the work in a more modest setting would be an injustice. On show through Wednesday, “Oktophonie” is one 70-minute-long chunk of Stockhausen’s epic, 25-year-in-the-making, 29-hour-long super-opera cycle Licht (meaning “light”). Completed in 2003, four year’s before Stockhausen’s death, Licht is composed of seven different operas, each associated with a different day of the week. “Oktophonie” is the second act of Dienstag (meaning “Tuesday”), and depicts an epic interplanetary battle between Lucifer and the archangel Michael. The electronic composition is meant to be performed—theoretically, at least—on the moon, with the audience sitting inside a perfect box of eight speakers.

Although the setup at the Armory is rectangular (the ceiling would have to be elevated to twice its current height to make a cube of appropriate proportions), what is on offer here is nonetheless remarkable. Sound projectionist Kathinka Pasveer, a long-time Stockhausen collaborator and the performer has, along with her sound designer, Igor Kavulek, transformed the score into a battleground. From low rumbles and drones that vibrate the body to electrifying clashes, hair-raising dives and violent collisions, one truly feels caught in the midst of a real and terrible carnage. “It’s so innovative,” Pasveer says of “Oktophonie” in conversation, “It was made in 1990 and it still sounds so fresh and so new.”

The Armory commissioned visual artist Rirkrit Trivanija to give the illusion of a visit to the lunar landscape, and his approach is effective: guests remove their shoes, don white robes and comfortably recline in seats placed on an elevated circular platform in the middle of the hall. The audience faces the centrally-positioned Pasveer, and thanks to the white tunics and the clean design, one has a sense of stepping into a distant utopia or occult spiritual gathering. A composer in the audience whispered to his neighbor suspiciously, “This all feels very German,” while another audience member whispered to her friend, “I want to come here to die.” 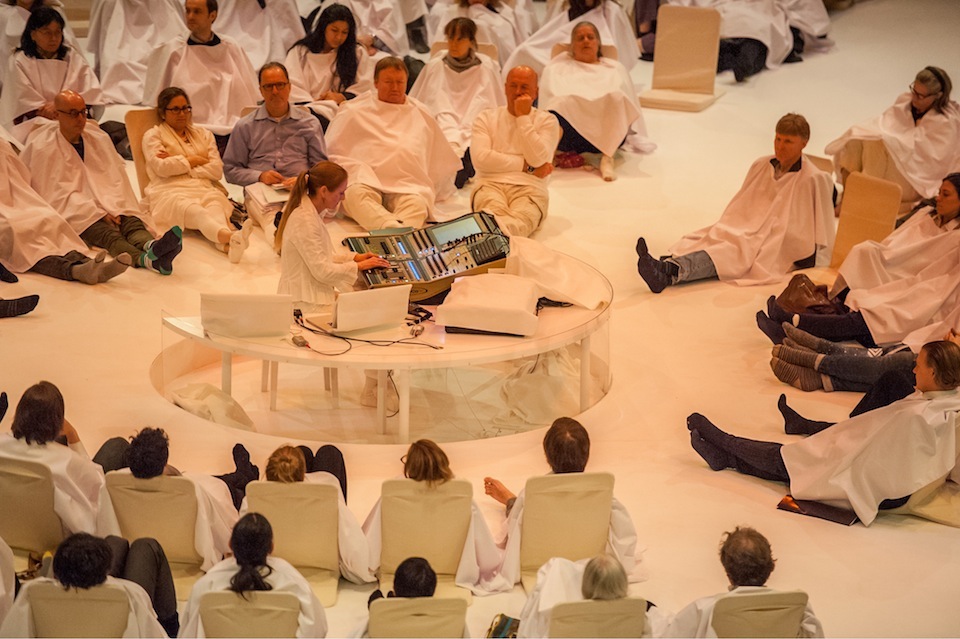 Lighting in the hall, designed by Brian Scott, is kept austere, and for good reason: “Stockhausen preferred that people closed their eyes and just listened, without any visuals,” Pasveer says. Alongside projections from the corners of the space (which deftly create the sense of a passing sun), a halo of lights hangs from the building’s 80-foot-tall rafters, casting the audience’s platform in hues of pinks and purples. The lighting is, as Pasveer puts it, “delicate.” There are few visual cues to aid the narrative, but if you’re here to see a light show, you’ve come to the wrong place; it’s the composer who tops the bill and his presence, even after death, is palpable. Pasveer says, “I feel that he’s still very much in charge.”

Stockhausen was a child of World War II and lost both his parents to that conflict. Cologne, his hometown, was one of the most heavily bombed cities in Europe. Over 250 air raids killed tens of thousands of citizens and effectively erased the city’s center. The war left a permanent imprint both on Stockhausen and his work, and nowhere is that more apparent than in the explosions and collisions of “Oktophonie.” To perform the opera—a meditation on war—in a converted armory is statement enough, but that the week of performances started their run on the 10th anniversary of the launch of the Iraq war feels particularly germane. After over an hour of what could easily be described as “shock and awe,” in the last few minutes of the piece the lights gradually rise until they blaze white hot, and the explosions fade into an unequivocally more harmonious crystal sound. It is a movement titled in the score simply as “Beyond.” Finally, all sound dissolves into silence and, for a moment, just before the inevitable eruption of applause, “Oktophonie” offers its war-weary audience one last gift: a fleeting vision of peace.

Stockhausen made a stereo recording of “Oktophonie,” which Pasveer compares to “a postcard of a cathedral.” It’s available here. Tickets for the performance at the Park Armory are still available.