Bruce Weber, the fashion photographer responsible for the Abercrombie & Fitch Quarterly catalogues, has a penchant for shooting surfers, and starting doing so decades ago, before the rest of the fashion and photo world became obsessed with all things beachy. Weber was welcomed into the famously touch-to-breach waves community through a friendship with California surf legends and husband and wife Herbie and Dibi Fletcher. Beach brand Saturdays Surf has published a portfolio of his photos over the years in the new issue of their magazine and even asked fellow surfer Danny Dimauro to conduct an interview with the Fletchers about their time in the ocean. Check out some of the photos here, read an excerpt from Dimauro's interview and pre-order the mag over at Saturdays' site before it's April 15 drop.

You guys are the most influential family in surfing. Herbie, you’re one of the early pioneers of tow-in surfing. HERBIE: No. I was the pioneer. I invented it. 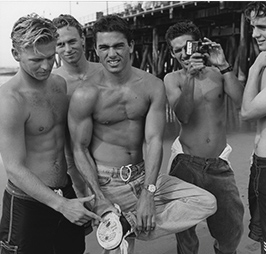 You were also the originator of the traction pad so I think it’s safe to say that you’re partially responsible for surfing leading the face of the wave and rising into the air. You had a fantastic co-pilot in your son, Christian, who perfected the aerial before anyone else. HERBIE: The traction pad is a part of the shape of a surfboard. It just evolved. We started cutting things out and gluing them on as thrasher pads. Skate was such an influence that we started adding kicktails to our surfboards, like a skateboard, so we would have full control of them. This was back in the ‘60s when we were first making mini guns and surfing Backdoor and Off-The-Wall. We added gun noses and made our boards shorter so we could fit in the tube and in the barrel, and make the draw. You couldn’t before that. Other boards were too long and you’d get stuck at the bottom. That’s how it got started.

You guys are a big part of New York’s surf narrative. Bruce Weber wouldn’t have had any access if it weren’t for you guys. He was the first fashion photographer to ever use surfers in editorial. DIBI: Absolutely, he got it. He looked at ‘em, and said, “These guys are the ones. They have such natural charm.” Bruce had the eye. I thought that was interesting because I’ve been doing this forever and he liked it; it wasn’t just this corporate surf thing. He kind of dug all those bad boys that were all my friends. Bruce was a mentor of sorts. HERBIE: He helps everybody, especially new or young photographers. I get behind the scenes with Bruce when he’s working. 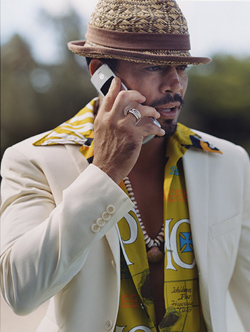 This one time I was the only one allowed around with a camera. The assistant tried to get in front of me and block me. Finally the chick goes: “Well I’m the only one who’s got balls around here and you can’t take any photos. You’re banned.” Bruce is in this crowd taking pictures, with all these people around him. This chick is in my face so I go, “Listen I’ve got a permit to take pictures.” She’s like, “Nobody’s ever had a camera on the set.” And so I yell over to Bruce and go, “Hey Bruce, do I have a permit to shoot you?” He stops everything, looks around and says: “Yeah, you’ve got a permit. Shoot anything you want.” The chick was like, “Fuck!” DIBI: He’s generous in his spirit and his willingness to help. Christian got kind of shafted in the surf industry and I’ve got to say that Bruce was really so gracious. I’d known all of these surf yahoos all my life and not one of them was helping. I thought, isn’t that interesting? He’d call me and say, “Dibi, I know I don’t know what I’m doing with any of this but if I can help in any way let me know.” The surf industry just chewed Christian up. Now, 25 years later, they’ve just discovered that aerials are happening. HERBIE: Well they were jealous. He turned surfers into dinosaurs overnight. This one guy and Christian were very competitive. Well—not competitive because Christian really didn’t give a shit, but the guy was going, “Oh you wouldn’t be anything without your dad.” But here’s Christian doing these perfect aerials in front of his face. People were blinded by their own self-interests. They tried to tell me that Kelly Slater’s not going to ride Astrodeck anymore because we’re promoting Christian? Promoting Christian? I’m just fucking promoting surfing—a whole new side of surfing! 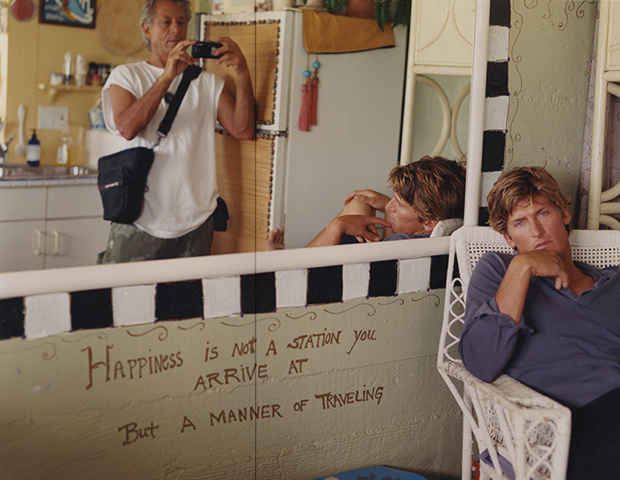