The only way reading Mohsin Hamid’s new novel, How to Get Filthy Rich in Rising Asia, on the subway could be any more embarrassing is if he’d tacked on “For Dummies” to the end of the title. But he’s a playful writer, not a sadistic one. The story, which takes place in an unnamed city very much like Lahore, Pakistan, where Hamid was raised and currently resides after having lived abroad for over 20 years, sees an unnamed protagonist make his way from subaltern to the top of the heap. As the title suggests, the novel is structured as a self-help book (with depressingly serious chapter titles like “Avoid Idealists” and “Be Prepared to Use Violence”), but it reads like a traditional narrative. Hamid spoke to FADER from his home in Lahore about how writing this book turned out to be surprisingly instructive to him.

Why did you write a self-help book? I started to just joke around [with a friend] about the idea that literary fiction really is just self-help—it’s something we’re doing that’s good for us, etc.—and we laughed, and I said I think I’m going to write a novel that’s actually a self-help book. The more we talked about it, the more true it felt in certain ways. What the hell is literary fiction exactly? Why do you need it? What are you trying to get out of it? It’s not just for fun. And if it is just for fun, it’s not marketed that way. So it was one of these crazy ideas that, the more I thought about it, the more it seemed that my novel had to actually be a self-help book. I started thinking as I was writing it, it’s kind of a self-help book for me.

What did it help you with? It helped me with a bunch of stuff. I’m going to start with the most depressing and probably least interesting from your standpoint, but maybe the most real. I moved back to Pakistan a few years ago, and so I’m living with my parents and my children—an extended family setup. It’s been 20 years since I lived in Pakistan full-time. Seeing a whole generation getting older, being a father myself, having little kids, and then all this stuff is happening in the news about Pakistan, terrorism, violence. Mortality has been scaring me more, recently. I feel like I’m more aware of the idea that I’m going to die, the people around me are going to die—that whole bit. So, in a sense, the novel is kind of like a secular meditation on death. That’s not a very catchy slogan for a book, but it helped me deal with the anxiety of being in a place like Pakistan and being between generations and seeing people getting older, being concerned for my kids. Also, in a weird way, I feel like writing fiction does serve a kind of spiritual purpose for me. 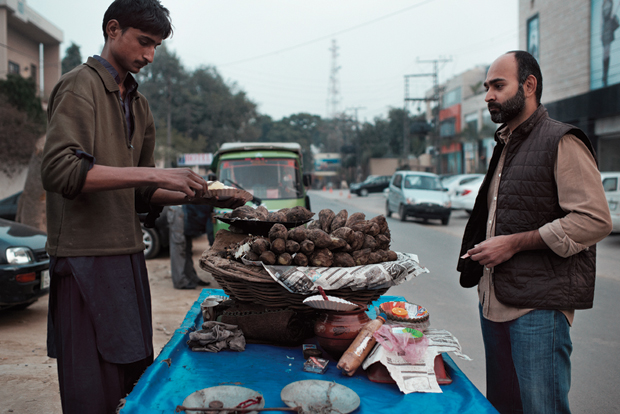 As much as it’s a self-help book, it’s also a love story. In a lot of languages, Italian among them, the word for novel is “romanzo.” It’s romance. I think that actually, as a secular person, when I think about the avenues we’ve got to deal with various crises—mortality and violence and everything—it seems that love is at the heart of the strategies you have open to you. Often times, when we talk about love and we hear the word used, it’s a consumerist love, in the sense that I want to possess you. I would like you to be my boyfriend or my girlfriend or my husband or my wife. And that love sort of boils down to the statement that you make me less lonely. I think in that sense, love doesn’t actually do that much for us, because just like my Ferrari makes me less lonely and my nice new apartment makes me less lonely or this big prize or New York Times Magazine cover story makes me less lonely, it’s fleeting. But I think there’s another notion of love, which you come across a lot in fiction, and in my case even being a dad—there is this notion that comes up again, that there are types of love which function not only to make you less lonely, but function by your desire to make somebody else less lonely. Whenever that happens, you are being taken out of the center of your experience of the universe. At that point, you’ve done a kind of shift—where you’re no longer the protagonist, in a way, and I think that shift, that kind of love, is an interesting, non-material response to our world. And you see it in so many traditions. In this novel, exploring the love story and trying to find a love story that would end you in that place was essential to what I was trying to do.

Do you have a different relationship with Lahore after writing the book? I do have a different relationship with it, because the years I spent writing this book I was trying to figure stuff out myself, and looking at things and particularly looking at people making a living here, seeing a young guy spray painting a bookshelf and just watching him do it over and over and over again. I watched people doing this stuff and imagined what it would be like to do this, or live this life, which, in a weird way, offered me an entry point back into my city and a way to experience it empathetically with other residents that differed from just coming back as this well-off person living in Lahore and sort of saying, Hey, this is cool. I was trying to look at the city in a certain way because, as a writer, most of what I do is look at stuff. I mean, that’s basically my job. I was looking at different things in different ways. That was a really great way to be an inhabitant, a citizen of my city.