Live: DIIV and How to destroy angels_ at the Apollo

Questions of scale were hard to ignore as a 1,500-deep audience slowly trickled into Harlem’s legendary Apollo Theater last night, summoned uptown by an unlikely appearance from Trent Reznor’s industrially clanging new quintet, How to destroy angels_, with a support set from Brooklyn rock band DIIV. For one thing, if you grew up watching Showtime at the Apollo and drifting off into dreams of exquisite soul music and miles of dancing and hooting spectators, the real-life Apollo feels small—almost endearingly so. Its tiered balconies and flowery, stucco ornaments are a quaint reminder of a time when entertainment was something a bit less ubiquitous and ordinary, a treat that you would look forward to for months, get dressed up to go and see. For spectators at the show last night, who by appearances consisted primarily of Gen X-generation fans of Nine Inch Nails, there was probably something slightly incongruent about the sight of a band like DIIV—all long, scraggly hair and tour-wilted, thrift store finds—bopping around on a stage that looked that fancy at the very un-rock & roll hour of 8PM.

Even considering the very human proportions of the theater, Zachary Cole Smith and his band—recently expanded to a five-piece—looked pretty small up there, especially for a group that an underground-focused rock critic like myself would tend to rank among that milieu’s most heroically scaled. Back in Brooklyn, DIIV is a big band—even a huge one—but onstage at the Apollo, they looked almost like they were auditioning for a high school talent show, dwarfed at once by the dimensions of their own clothing (Cole, most stylishly, in his hippyish patterned smock and baggy linen pants) and the DIIV-themed, custom stage backdrop that stretched up to the ceiling behind them. This bore the chicken-scrawled, expressively misspelled kid’s poem “Oshin” that, according to urban DIIV lore, inspired the title and subject matter of their debut full-length, Oshin. The poem is the kind of delicate, cherished artifact that one might be delighted to discover crumpled up in the pocket of a parent’s old coat (actually, it's a poem that Cole's ex-girlfriend shared with him from a children's poetry workshop she used to help run), and seeing it blown up to absurd billboard size magnified its childlike smallness, which would gain a retrospective irony after it was followed by How to destroy angels_’ genuinely bombastic production.

Still, it’s a diminutiveness that DIIV has always worn quite fetchingly, especially in contrast with the majestic lines and easy geometries of the songs that they write, which the ragamuffinish crew nailed at the Apollo with the combination of krauty precision and galloping momentum that suggests that a band has been touring a lot. On “Dust,” a new song, there were even hints of something angrier and more cinematically ambitious brewing, with its storm-like, grumbling bass tones and a foray into something almost resembling Patti Smith-style spoken word, with Cole wrestling with his mop of blonde hair like a true, tormented rock star just minutes after shouting out his own mother in the audience. She has reason to be proud; in the moments where the band's tightly interlocking foundations of guitar and bass exploded into a wailing release, it's clear that DIIV has matured into a unit that knows how to create a "wow" moment for an audience, and seems entirely in control of when that happens. 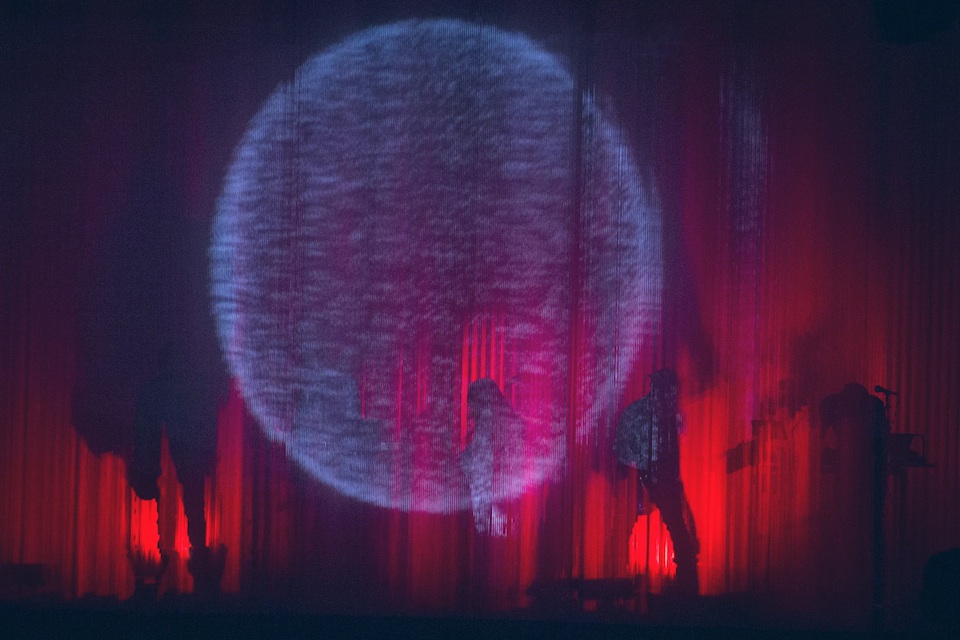 Where DIIV’s music seemed to genuinely conquer the theater from its humble origins in a pint-sized rock band, How to destroy angels_ started big—almost extravagantly, quixotically big, with a pyrotechnics-like display of flashing lights and miniature sound explosions, revealing the band’s five members to be standing at a remove, behind a transparent screen. Delicately illuminated by an ever-unfolding series of light schemes—from an amniotic flood of red to ocean blues and animated, digital grids—this half-obfuscating arrangement seemed an appropriate metaphor for the band’s hour-and-a-half set, which turned squelching textures and crunching, mechanistic beats into something paradoxically rhythmic and engrossing. Like most of the music that Reznor is so widely loved for, the music managed to feel “difficult” and “abrasive” while remaining simultaneously accessible, sending the crowd into predictable but rapturous applause at the moment when the screen was finally pulled back, to reveal the much-coveted, in-the-flesh Reznor, theatrically belting the final refrain of a song. Still, if anyone stole the show, it was probably his wife, Mariqueen Maandig, who, in some of the performance’s more intimate, less vocoded moments, actually revealed herself to have something of a Broadway voice. When the flood lights flashed blindingly bright during the big how long in “How Long?,” it was both enjoyable and appropriate. But when the set wound down with a lovely, sparsely ambient passage of vibrating, sputtering synths, it seemed like they could give their audience an even greater thrill by pulling back from time to time.

21 Savage arrested, released on bond, after turning himself in

music / Pop
music / Features
Live: DIIV and How to destroy angels_ at the Apollo