Our Father: Life in the Source Family

When she was in her late twenties, Charlene Peters grew her hair long, changed her name to Isis Aquarian and moved in with the Source Family, a rock & roll-loving utopian community centered around a continually evolving list of New Age beliefs, and led by Los Angeles health food restaurant tycoon Jim Baker, better known as Father Yod. Yod, a charismatic former marine and Hollywood stuntman with a long white beard and a yearning for spiritual enlightenment, enlisted Aquarian as one of his 14 wives and appointed her documentarian of the communal living experiment, which she followed from LA to San Francisco to Hawaii between 1972 and 1977.

Though the group was short-lived—dispersing in 1977, two years after Yod died unexpectedly in a hang gliding accident—its legacy of meandering psych-rock, exuberant sexuality and long robes continues to reverberate in the worlds of style and music alike, thanks in large part to the massive archive of photos, posters, hand-written ephemera, sound recordings and film footage that Aquarian compiled and captured. By 2007, with the help of “brother” Electricity Aquarian, she’d folded its contents into a published book, and this spring, she’ll debut The Source Family, an engrossing documentary full of interviews with former Family members, which she co-produced with directors Jodi Wille and Maria Demopoulos. Some Family alumns—like Robin, Yod’s heartbroken first wife, or members who couldn’t get on board with the community’s ban on Western medical care, or Yod’s eventual claim to god-like status—look back on the experience with mixed feelings, but Aquarian remains a believer. Here, from her current home on the Hawaiian island of Oahu, she takes us on a guided tour of the rise and fall of Father Yod’s vegetarian kingdom—at least as she experienced it.

The Source Family documentary premieres at IFC Center in New York today. It will hit theaters nationally throughout May.

How did you get involved with the Source Family? I knew Jim Baker when he had the Old World restaurant. He had three famous restaurants and he was married at the time to Dora, who became my friend, so I knew him basically before the Source and before anybody else knew him. I kind of lost track of him for a while and ended up becoming engaged to a photographer, and we were looking for a model for a poster we were doing for Jesus Christ Superstar, and I remembered somebody told me that Jim Baker had opened the Source and they were wearing robes and had long hair and he was into a spiritual path. I thought I could find Jesus-looking people if I went. So I went to the Source and stepped onto the patio and he came out and looked like Moses. He was not the Jim Baker that I knew; something just happened. It was like his frequency uncoded my frequency and that was it. I knew that’s what I was waiting for and I never left; I just walked out on everything.

Had you been wanting to walk out on everything? No. What I had been searching for was some type of spiritual path. I tried Buddhism; I tried different things. I did have a longing for something—there was just something that wasn’t fulfilled within me, but I didn’t know what it was.

How would you describe a typical day there? We would get up, and do some yoga stretches and some breathing. We usually had a pool wherever we would live, so we would just kind of dip into the cold water, which was very refreshing, and get dressed, have a cup of coffee and wait for morning meditation, which was our morning class. We always greeted the sun wherever we were. We would go outside and watch the sunrise and then we would start our day. People would either go and work at the Source or we would do our duties around the house, or whatever business energies were happening. The band would go into the band room and try different things—you know, make a few more albums. We had artists. We all were a thread that made up that tapestry, and everybody had their part that they did.

How did the community sustain itself economically? Probably completely from the Source. There were certain people, periodically, who would come in with money, and that was given to the whole. The Source was a phenomenal little restaurant. It was probably the most popular place to be at the time. Everybody was there: musicians, actors, actresses, Andy Warhol. It was more than just the food, it was the ambience, it was us.

How was the wealth distributed between the Family members? Everything was pretty much shared. Everybody had what they needed, too. There was a time that we all had our own jewelry—I wouldn’t say anybody lacked anything. There was a point when we could have had anything we wanted, but this earth material plane was kind of not our focus. You get very simple when you start dealing in other realms. The materialistic stuff of this realm is not that important.

Still, the Source Family remains an influence on contemporary fashion designers. Were you conscious of cultivating a specific aesthetic? We lived in our own world and had our own rules and protocols and our dress just reflected healthy, free-flowing aesthetics, and we were conscious of our style within what we were doing. Nobody cut their hair, not even the men. We went through periods of inclination—Egyptian, Asian, Roman, Grecian—and we started dressing like that. We had a lot of fun.

You didn’t drink alcohol, right? We didn’t, as a rule. It was completely marijuana, which we called “the sacred herb.” There were a few periods throughout our family time where somebody would bring a big bowl of mushrooms and Father would try them. It’s not like we went out and bought it, but if somebody brought it, Father had a tendency to try it. I think once there was some cocaine. He went, Well, I’m not any higher than when I do meditation or deep breathing. We were high from the way we were living, the way we were eating, the way we were thinking—just what we had tuned in with.

Recordings by the Family’s many house bands—especially Ya Ho Wha 13, in which Yod himself performed—are now sought-after by collectors of psychedelic music. Can you tell me about musical life in the community? The whole family was involved in the music in the way that we all shared everything. When they went into the band room, we had speakers in other parts of the house where we could hear everything that was happening because the band room was small and not everybody could go into the band room. Of course, we all came in with what was happening in the ’60s—The Beatles and all of that. But once we started our own music, it was spontaneous; there were no rules. There was a band called Breath that rehearsed and wrote songs. But the musicians had already been tuned into working so cosmically with each other that one of them could do a riff and the other one would just take off on it. Father would be very excited and have them play it back for us the next day in class.

What was romantic life like in the Family? Romantic life was great. There were never any orgies. It was pretty much one-on-one energy between two people, and the same with Father. [Sex] was very sacred, and there were protocols. Nobody had to do anything they didn’t want to do or be with anybody they didn’t want to be with. We were pairing up all the time: different pairings, different situations. Sex is a creative force of the universe if it’s done and understood right. As far as Father and his women, he had 14 women, and there were times when there were different groupings of who the women were, but when we moved to San Francisco he sealed it.

Was that challenging? I’m sure whomever you talk to, they might have their own version of it, but I didn’t have an issue with it—I didn’t have that karma in this lifetime with that man. We were just doing the work together. There were some of the women, like his first wife that started his first family with him—she didn’t really sign up for him taking on 13 other women. I’m sure with some of the other women there were issues, but there wasn’t anything that wasn’t honored or respected and worked out. That was a very high priority in our thought patterns: the concept of working out threads with each other and incarnations of many lifetimes and being as clear as possible. He was really big on what this next golden age was about, and you had to be as clear as possible to step into it, which means you couldn’t bring all the old crap with you. 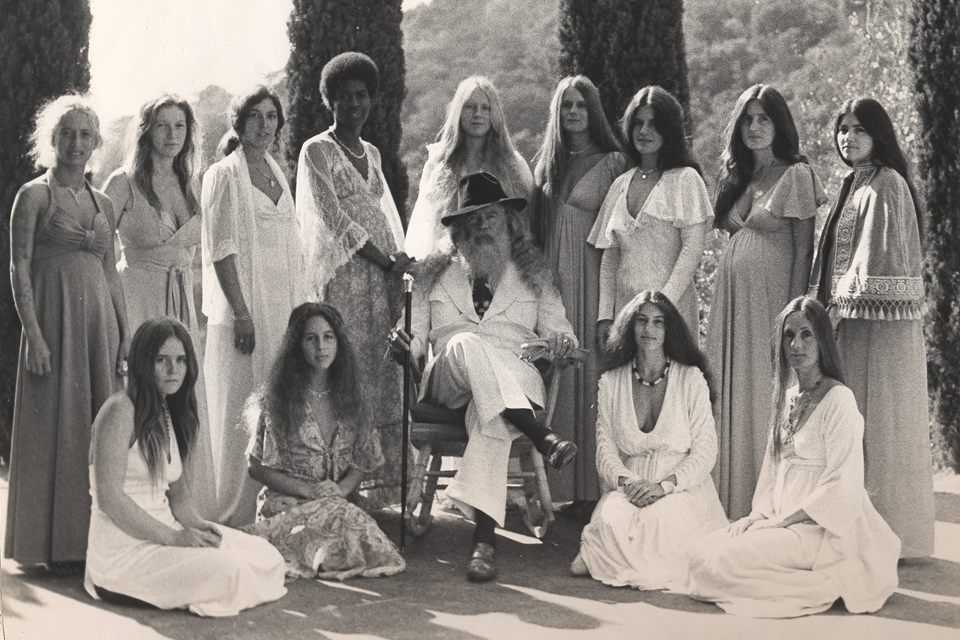 Was there ever the sense that the Family’s belief system might expand beyond the original community and become a wider movement? We would not have extended beyond our community, because we were what we were, and it was a circumvent force. It was not something you could go off on your own and still be part of. That started becoming the issue toward the end, and that was basically when Father Yod had talked several times about dispersing the family, because it had gone beyond being manageable— especially when we sold The Source and moved. It was like we didn’t really have that golden egg anymore that supported us, so when everybody had to start thinking about going out and working, that was really a horrible time. Because when we left LA, nobody gave us an opportunity to start another restaurant or get grounding anywhere. When we came to Hawaii, they thought we were somewhat like the Manson family. They just weren’t ready for who we were, and we never even thought that anybody would think that about us because we’d lived in LA for so long—we were like the darlings of LA. [But when we came to Hawaii], we were intimidating. We weren’t exactly hippies. That basically started [Father Yod’s] journey—all he really wanted to do was find some land where we could live by ourselves and be self-sufficient, but that just didn’t work out.