In 2002, then FADER editor-at-large Knox Robinson wrote about The Roots for the cover of The FADER issue 12.

As far as I know, there’s only been one good Roots story ever written. Abbey Goodman wrote an article entitled “The Roots Of Good And Evil,” and the piece was the result of Goodman’s obsessive pursuit of the group through “three months, four performances, three cities, two jam sessions, four hotel rooms, two homes, one television segment, two studio visits, one listening session, four parties, two bars, three photo shoots, two slammed doors in [her] face, at least nine cab rides and one long-ass car ride in Philly.”

The article had everything—lead MC and anti-celebrity Black Thought rapping out driving directions, drummer ?uestlove’s astute observations on the parlous state of hip-hop, bassist Hub’s conflation of the record industry with the Devil himself, keyboardist Kamal and MC Dice Raw’s seasoned, hard-earned misogyny, and hinged on Goodman copping a conversation with the elusive but enormously talented MC Malik B, who occasionally spoke in a voice that was “vaguely Apu from The Simpsons/vaguely Eastern European” and explained his Arabic name meant either “God, like King” or “the keeper of Hell” depending on how one pronounced it. Goodman concluded that it was hard to know the Roots.

But Jay-Z did Goodman one better at his MTV’s Unplugged taping earlier this year, when he introduced the players behind him as “the Roots band.” In the moment it was easy to interpret Jay’s gesture as a sly dig, as if he was drawing a line in the sand between hip-hop (as represented by himself, of course) and whatever he intended “band” to signify. After five albums, one Grammy and countless collaborations, the Roots are classic hip-hop, of course, but their resistance to follow along with the rampant soul-gutting commercialization of the music is the antithesis of the iced perfection Jay-Z embodies. Some have interpreted this ambivalence as a certain “consciousness” but it has more to do with a simple idea brought to light by Goodman’s long form and Jigga’s pat nomenclature: the Roots are a band.

“We’re sort of a nondescript group,” says ?uestlove. “We never had an identity [such as], ‘Okay, they’re gangster’ or ‘they’re commercial’ or ‘they’re underground.’ You can say, ‘Oh, they’re the band,’ [but] that’s so obvious. I don’t think people are even smart enough to say, ‘Oh, that’s their identity, they’re the live band.’”

But people say that, and therein lies the problem. Their constant touring schedule (250 dates a year) and penchant for collaboration have brought them a kind of success based on ubiquity, but somewhere along the line a cognitive leap was made and until the very recent rise of commercial rap-rock the Roots’ sound was often equated with the very definition of live instrumentation in hip-hop, rather than just one of the ways such an idea might be accomplished. Thus, in a strange paradox, one of the genre’s most unique experiments was rendered its most generic. 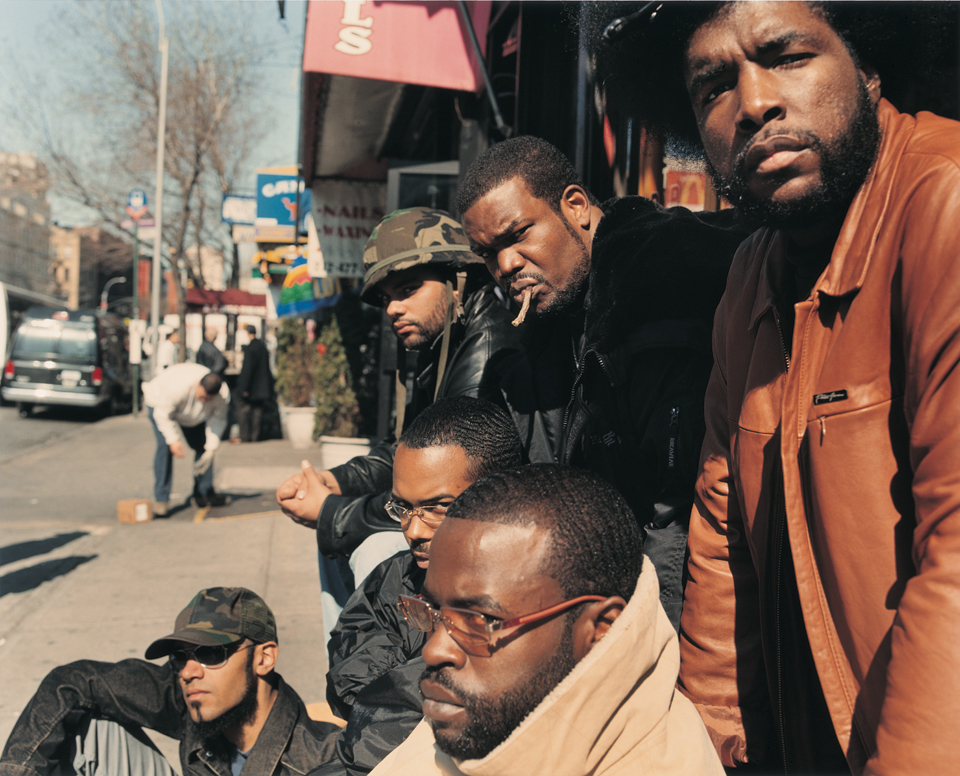 It’s an old story, the idea of achievement begetting new challenges, and this is the situation staring the Roots in the face as they prepare for the release of their sixth album, Phrenology, later this year. “If you’re a Roots fan already, you’re at the point where you can rest assured with regards to the quality of the music. [But] that’s what we were racking our brains for, and that’s what took this album so long—trying to make this release a step up from the last thing we put out,” says Black Thought. “But it’s hard. In ’92, ’93, I was in a completely different place. I had mad ammo, mad material, I had my whole life’s worth of ideas and shit. I would be constantly writing rhymes, and I would always have a book with me, freestyling some shit. Now, if I’m writing a song, it’s because I’m in the studio and I’m about to record it.”

Whether because of rap’s intrinsic limitations or because of the corporate structure that has come to feed off it, it’s rare that hip-hop acts get a chance to evolve or change, to have any real artistic arc over the course of a career. But from an early listen, Phrenology is a staggering step away from the Roots’ previous work. It comes as a fast and furious musical juggernaut, with the unit as a cohesive whole rocking harder than their earlier pioneering work that spawned a thousand neo-soul dreams. For the first time since their rise to the commercial radar, it sounds as if they are prepared to outstrip their previous mythology as a collection of outsized personalities. The Roots want to be a band again.

“We didn’t set out to make a dark album, we were just basing our stuff on our reality. This is where we are at the moment,” explains ?uestlove. The bandleader says pursuing a new sound with a specific technical goals in mind—creating programmed drum rhythm tracks over 100 beats per minute, songs in which newly-added Ben Kinney’s rock guitar figure prominently or ones recorded without the Roots’ trademark Fender Rhodes—resulted in the album’s aggressive sound, even as collaborations with Nelly Furtado and Cody Chesnutt added “bright moments” to the Phrenology sessions.

“We’re the ‘hip-hop band’ but we’re just making our next album, which is going to be an amalgamation of every personality that’s in the whole ensemble,” says Black Thought. “My perspective might be more hip-hop than Hub’s, but Hub’s perspective is definitely more classical than mine, and ?uest’s perspective is maybe even more jazzy than Hub’s, but Ben’s perspective is even more rock than ?uest’s, you know? You got all these different personalities in a group where the lead vocalist isn’t the end-all, be-all, which is the usual situation—where the front man is the front man and everyone else is added extra. It’s not just a hip-hop album, which is why it doesn’t come off like that.”

To use two obvious examples: Miles Davis and John Coltrane ran into similar problems in the mid to late ’60s, as both men (like many jazz musicians of the time) grew increasingly restless with the music they had made and the international fame it had brought them. Not content to simply play “jazz,” Miles and Trane had the notion that there was more music out there or in there to be found or made. As befitted his religious bent and his interest in Eastern mysticism, Trane went up and out, driving his saxophone solos in a search for spiritual resolution and ecstatic peace. Miles turned in the other direction, diving inward with a rock and funk-influenced brooding, moody tone that was both classic Miles and a terrifying new direction in jazz. Where the volatile Malik B was once seen as the emotional core of the Roots, his personal dissolution and departure from the group—painfully described in the new song “Water”—has made an obvious impact on their outlook. If Outkast’s Stankonia is the sonic equivalent of Trane’s late Village Vanguard sessions, Phrenology might be the Roots’ Bitches Brew.

With hip-hop as we knew it swiftly reaching its nadir, and no one even trying to save it anymore, it’s a good time to be a band again. Call the Roots’ music whatever you want. It might not matter all that much to the fans. “They ain’t concerned with who did the beats,” says Black Thought. “They just wanna fucking hear the new shit.” As for the band itself, they ain’t hearing you either. They’re playing too loud. 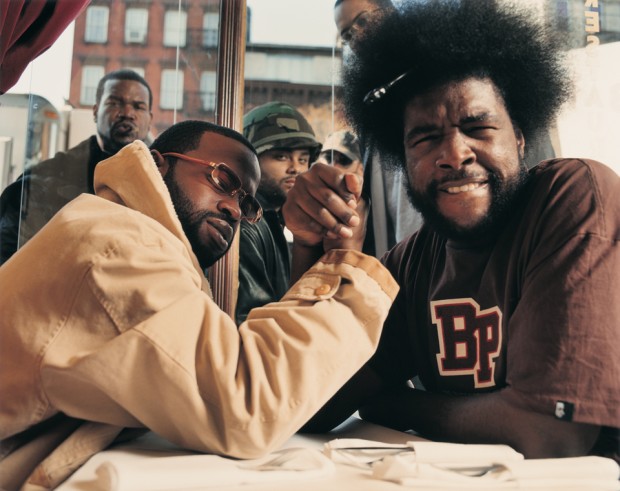