There are certain cultural events that simply can’t be ignored, even if you’re trying. Kanye West is currently hogging the spotlight, but there’s another superstar who’s shining in nearly every major US city this summer, and surprisingly, many barely know his name. He is James Turrell, a 70-year-old artist with a big white Santa Claus beard who has four major shows that opened this month, the most recent of which happened last Thursday at the Guggenheim in New York. Earlier in June, the Los Angeles County Museum of Art opened an exhibition of 11 original works, and the Museum of Fine Arts Houston launched a similar retrospective; even Turrell’s longtime gallery in Los Angeles, Kayne Corcoran Griffin, has hung a show focusing on his magnum opus, Roden Crater, a massive volcano in Arizona that has occupied much of his artistic focus in the last 50 years.

Turrell is very prolific; he was the first artist to ever receive a MacArthur Genius grant, and has done 140 solo shows since 1967, along with over 75 private works. That he has remained slightly under the radar is a bit mysterious, especially since his art itself is so universal and stunning. He works with light, which he uses to reorient our relationship to space, and is known to say things like “light is very familiar to us, but we don’t often see it that way.” He also has devised an artistic system of four basic structures: Skyspaces (inside spaces with cut-out apertures to the outside), Ganzfelds (immersive, light-filled installations), Apertures (cut-outs with timed light installations,) and Shallow Spaces (light projections in dark rooms that challenge the viewer's perceptual faculties). He mixes these structures often, as in his newly opened installation at The Shops at Crystals in Las Vegas, where four apertures project red, pink, blue and purple neons against a Shallow Space construction that actually houses the area’s monorail station. Also tucked away in the halls of that very mall is Louis Vuitton’s private Ganzfeld, Akhob ("aknob" means "water" in ancient Egyptian), which is the largest of its kind, and opened to private viewing in May.

As anyone who follows the art world is aware, people tend to use a lot of big words and inaccessible jargon to describe rather tangible concepts. In a twist of irony, Turrell seems to operate in almost the opposite way. He speaks simply about what he does, as do the critics, but it's the pieces themselves that are slippery. They're expansive and sweeping and they tend to hoist you up into a kind of transcendental cloud, so that when you recount what you’re feeling to anyone else it sounds like you just took a massive hit of molly or are following the spiritual guidance of Deepak Chopra a little too enthusiastically. As Turrell said at his Guggenheim opening, “We have this other seeing: the seeing with eyes closed.” 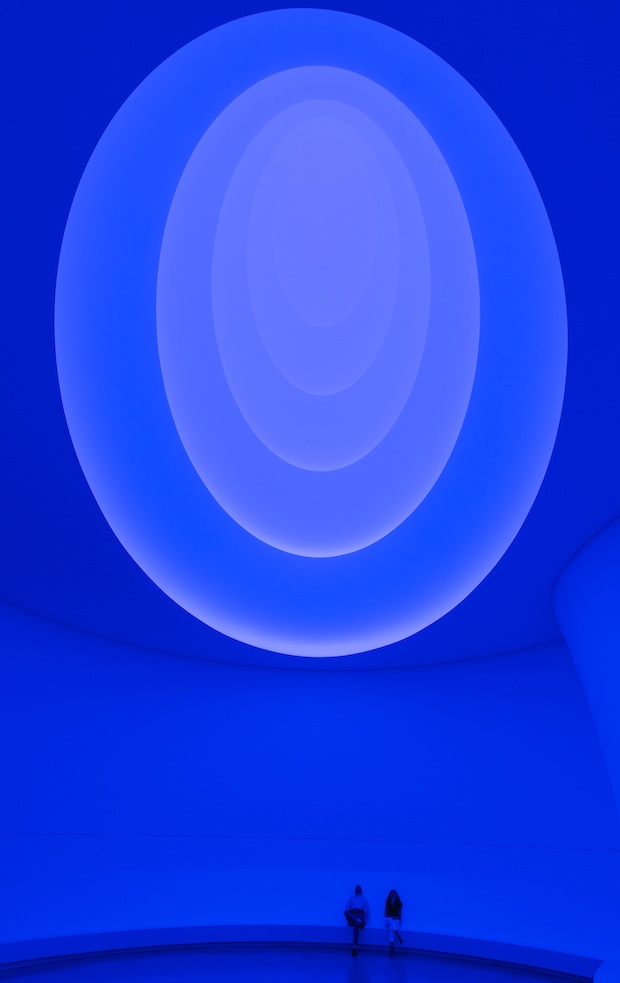 Still, it's hard to keep your eyes from popping open in front of his works, particularly the gorgeously converted rotunda in the Guggenheim’s central atrium. Titled Aten Reign, it cycles through a series of coordinating color schemes, with each of the museum's five floors illuminated in a different tone of a certain color. The light rotations, originating from projectors, shift with the curvatures of the monumental Frank Lloyd Wright building but also with variations in the natural light that is pouring in through the skylight. It certainly is grand, and while Aten Reign is a tough act to follow, the show also offers a glimpse of Turrell’s earlier works, such as his Arfum 1 (1967) projection, a fuzzy white box illuminated in a dark corner, and Prado (1967), a white rectangular void, also set against a dark wall, that feels like Alice’s trap door to Wonderland (though who knows if there's even another side?).

The stepping stone, however, between his late 1960s projections and his Ganzfelds is Iltar (1976): a rectangle of darkened light, viewed through a partition in a bifurcated room and originating out of the space where the spectators are standing and looking. It’s not his sexiest piece, nor his most commanding light work in terms of color or loss of space; however, as an experiment in sensory reorientation, Iltar plants the seed for the wizardry that has defined his work of the past three decades. Light is the man’s medium, but it’s also his message, and Turrell explained in the Guggenheim talk, “You can see the physicality and feel how it occupies space.”

If that doesn’t mean much to you, then just go see the show—because really, like anything else that’s moving and otherworldly, words rarely do it justice.