Just days after the June release of Migos' third tape, Drake shared a remix of "Versace," the Atlanta trios calling card. Soon after, longtime Drake fan Justin Bieber posted a short video of himself rapping along. This burst of internet momentum followed a couple years of steady growth for the Atlanta trio. Quavo, 22, and his 19-year-old nephew TakeOff visited New York this month to perform a handful of buzz-riding performances. (The group's third member, Offset, was incarcerate halfway through the recording of Y.R.N. He called Kevin "Coach K" Lee, the manager Migos now share with Gucci Mane, from prison during our interview, and we spoke briefly. He said he's heard Y.R.N., that the staff where he's locked up are fans of the tape, and that, pending a successful appeal, he'll be out before August.) In New York, Quavo and TakeOff talked about sharing a house as kids, Drake's interest in their hometown and why, even though breaking a song on the internet is free and fast, befriending strip club DJs is still a good way to get your foot in the door in Atlanta.

How did you grab the attention of Atlanta’s rap elite from Gwinnett, the suburb where you grew up? QUAVO: The movement started in Gwinnett, on the North Side, with the Juug Season mixtape two years ago. Gwinnett gets overlooked because it’s so close to the city. But we just kept being annoying in the local clubs. TAKEOFF: Paying the DJs, getting them drinks. QUAVO: Keeping one consistent song in rotation, instead of just coming to the club with a different song every time. TAKEOFF: And showing face, back to back to back nights. So as much as they keep hearing our song, they see us too.

How did music become your dominant ambition at such a young age? QUAVO: I was a sport fanatic, I played football. Rap was actually his dream. TAKEOFF: He was trying to do sports and music, whenever one took off first. I ain’t never did no sports, I just always wanted to rap. When Quavo was out doing sports, I was in the studio, what we call the bando, making music, going hard. QUAVO: We never took music serious till we dropped the first mixtape, my 10th grade year. I didn’t finish high school. TAKEOFF: I didn’t ever tell him to stop doing football—if that was what he wanted to do he was gonna do it. I knew what I wanted to do and we kept on working.

How did Offset come into the fold? QUAVO: Offset is fam. He’s been around us every since 6th grade. We got him to rap in high school. We always stayed in the basement messing around with the beats. He did one song and his voice sounded good. He had a good voice. TAKEOFF: He was snapping too. Back then, that’s what the trend was. QUAVO: His verse wasn’t all that, but his voice was good. So he had to work.

What was it like to grow up together, as uncle and nephew? QUAVO: We moved from Athens to Gwinett when Takeoff was in elementary and I was in middle school. His momma took care of everything, and us. We always stayed in the same house. We share everything. He’s basically like a brother. TAKEOFF: I don’t look at him as my uncle, but more as my brother. But we always have clowned on each other. He is my uncle, so I gotta clown on him. You gotta be funny. QUAVO: You gotta practice against each other. We get Offsett the worst, cause he’s got the haircut, he’s the most different one. We tried to get him to grow out his dreads, but every time we do he cuts it.

How long have you been growing your dreads out? TAKEOFF: About five, six years. My momma’s my hairdresser. I don’t really get them done much. I feel like they’re dreads and they should just be how they’re supposed to be. But if we got a video or something we’ll go get em cleaned out.

What’s more important, writing clever lyrics or delivery that sounds good? QUAVO: Whatever makes their head nod, that’s what I’m gonna do. You gotta throw something funny in it. TAKEOFF: You gotta have fun with a song, make somebody laugh. You gotta have character. A hard punchline can make you laugh, but you gotta know how to say it. QUAVO: It’s all about delivery, and how much energy. You can really hear that we’re turned up in the booth. It don’t sound like we’re dead. TAKEOFF: You might just punch somebody listening to the music. It’s got so much energy. QUAVO: You might be so amped up you just jump out the window. "Hannah Montana" made me go crazy. I really do jump around on that song. 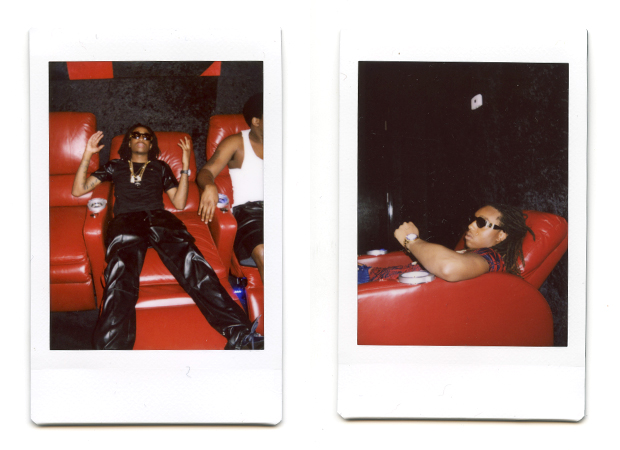 How do you improve your delivery? QUAVO: We listen to ourselves a lot. You can hear the progress we’ve achieved since the first mixtape. Every time we’re gonna drop a tape we’re gonna notch up, with different delivery, more delivery. TAKEOFF: We do like seven songs a day. QUAVO: Like he might just go in by himself and do a bunch of verses. We kinda leave like homework for each other. And then when we go in the studio together, it’s just like 10-15 minutes and we’ve got it. TAKEOFF: We’ve got a 15 minute rule, we can’t be in the studio for longer than 15 minutes. That kills the vibe. No one will wanna do the song no more. Afterward, you listen to the song and see what you did, how the song sounds. QUAVO: When you drop a song and wake up in the morning and hear the song you dropped last night, that’s the best feeling. The song will tell you then. TAKEOFF: Maybe you weren’t feeling it last night, but you wake up a listen and it’ll be hard. You’ll be like, I didn’t even know it was that hard! QUAVO: Sometimes we’ll record something and be so geeked up about it, like, It’s a hit, it’s a hit! When that happens we’ll take it right out of the booth and go to the strip club. TAKEOFF: Follies and Magic City.

Your clothes have gotten flashier over the past year, and you’ve started performing shows outside Atlanta. Are you concerned with your image, and becoming more professional as performers? QUAVO: We don’t really practice for the stage. Our first time rehearsing was when we did Birthday Bash with B.o.B. I didn’t like it, I was bad at rehearsing. They wanted us to do it like we were really performing, but there was no one there. Rehearsal is weird. TAKEOFF: I can’t get turned up if there’s not people there.

Did Atlanta adopt Drake, or did Drake insert himself in Atlanta? QUAVO: I don’t know, but he’s good on my hand. We met him at Birthday Bash. TAKEOFF: A good friend of ours introduced us to Drake. He was backstage, eating some wings or whatever, and he walked up to us and started naming songs off the mixtape: “I like ‘Pronto’, ‘Bando’, ‘Chirpin.’” We’re looking at him like, You Drake! We’re like, you gotta get one in and he’s like, “I gotta get on that 'Versace' pronto.” We sent him the song and he sent it back ASAP. QUAVO: They say the record’s doing good right now. He really knows we got some good music. The first line he said was my bars, so you know he’s really rocking with it.

Have you heard from Miley Cyrus? QUAVO: We haven’t heard from her, but we’d love to have her in the "Hannah Montana" video. Tell her to come and do a verse on the song, her first rap song. TAKEOFF: Tell her I’ll write her verse.