When I meet up with Omar Souleyman in March, he’s sitting on the floor of his manager’s apartment in Williamsburg, Brooklyn, relaxing after a full day of recording with Four Tet, who has flown in from London to produce the Syrian musician’s Ribbon Music/Domino Records debut, Wenu Wenu. Souleyman smokes cigarette after cigarette and sips glass after glass of hot tea. He dons dark sunglasses for the duration of our interview, which occurs entirely via an Arabic-English translator seated at his left. There is a civil war going on in Souleyman’s country, and sometimes, when it comes up in conversation, I notice his hand working its way up a string of worry beads.

Souleyman specializes in a traditional form of Arabic folk music called dabke; its propulsive rhythms make it perfect for singing and dancing in groups (usually weddings), but Souleyman is known for making it even more uproarious, cranking up the BPM and filtering it through a future-friendly palette of electronic beats and screaming synthesizers. Here in the West, following a string of releases on archival world music label Sublime Frequencies, he’s developed something of a cult following among collectors of obscure and idiosyncratic sounds. In the Arab world, he’s a household name, but that didn’t stop him from being forced to leave his hometown of Ra’S al’-Ayn when the escalating violence between the Syrian Armed Forces, the Free Syrian Army and others made it too dangerous for anyone to live there.

Nowadays, he’s a refugee living with his family in Şanlıurfa, Turkey. When I ask him how the situation back home has affected his career as a touring performer, he tells me a harrowing story about the dangers and difficulties he faced while traveling to SXSW this year for a fundraiser show he’d been slated to play—all proceeds benefitting American Red Cross initiatives for Syrian war victims. His tale begins in Lebanon, just a few days before the concert in Austin. Souleyman had sent his passport to the American Embassy in Beirut via DHL to be stamped with his temporary US work visa, but the passport was inexplicably held up by the Lebanese Security Authority, forcing the musician to drive all the way there to pick it up. It was a giant administrative headache, but the real trouble started when Souleyman had to find his way back to Şanlıurfa to catch his plane.
emilie friedlander 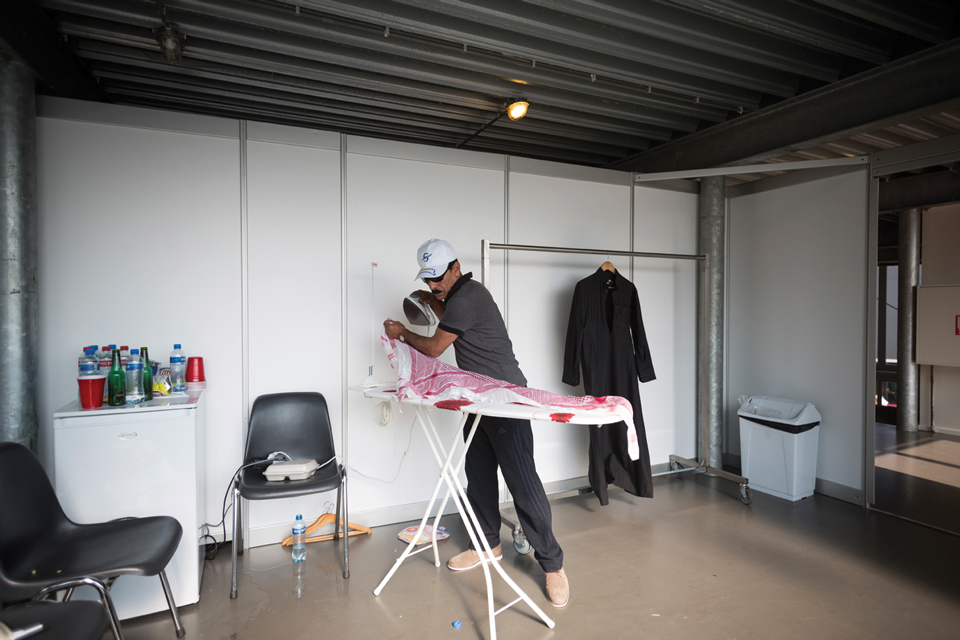 The flight I had to catch to get to Austin was leaving the next day out of Şanlıurfa, Turkey. It was 4PM in the bus station in Beirut, and the next day at 4PM I had to be at the airport in Turkey. I got to the garage and they told me, “Brother, there are no buses until 11PM,” which meant I was going to miss the airplane and miss the show. There was no way it was going to work.

The only option I had was to take a car. I went to the cab section of the bus station and asked a driver, “Brother, what time are you leaving? I need to be in Ar-Raqqah [town in Al-Jazira, the region of northeastern Syria where Souleyman is from] by 8AM so that I can make my flight.” He said, “You can come with me, but there’s a corpse in the van.” I said, “No.”

I went to the next car and said, “Brother, I need you take me from here to the Turkish border.” He requested 43,000 Syrian pounds [$400]. I initially thought, “No, I don’t want to do that.” I had brought 50,000 pounds and about 300 Turkish lira to Lebanon, but I didn’t have much money left. I called my friend in Turkey and asked him to meet me at the border so we could pay for the cab. My friend said, “I’ll meet you at the border at 9AM with the money.”

The driver wanted the money right away. When I told him I’d have to pay him when we got to the Turkish border, he said, “No, I don’t want to go. The road is bad, full of killing and danger.” I told him, “Listen, I am Omar Souleyman.” He said, “Wow, you’re Omar Souleyman? I won’t take your money until we get there.” I said, “Okay.”

After we left Beirut, on the road between Tartus and Homs [in Syria], we heard that there was a gang-like group of people who were stopping all the passengers, stealing their money, their cars and killing them. Perhaps my luck was good, because they were gone just minutes before I got there. But 20 kilometers before Homs, the army stopped us and told us that the road through the city was closed: “The road is blocked. There has been gunfire. You have to go around.” We said, “Leave it to god,” and I told the driver to just go. We continued on to the very beginning of Homs. Here was a fork in the road—you go to Homs or you take a detour. But the army wouldn’t allow us through the detour because it was bombed. 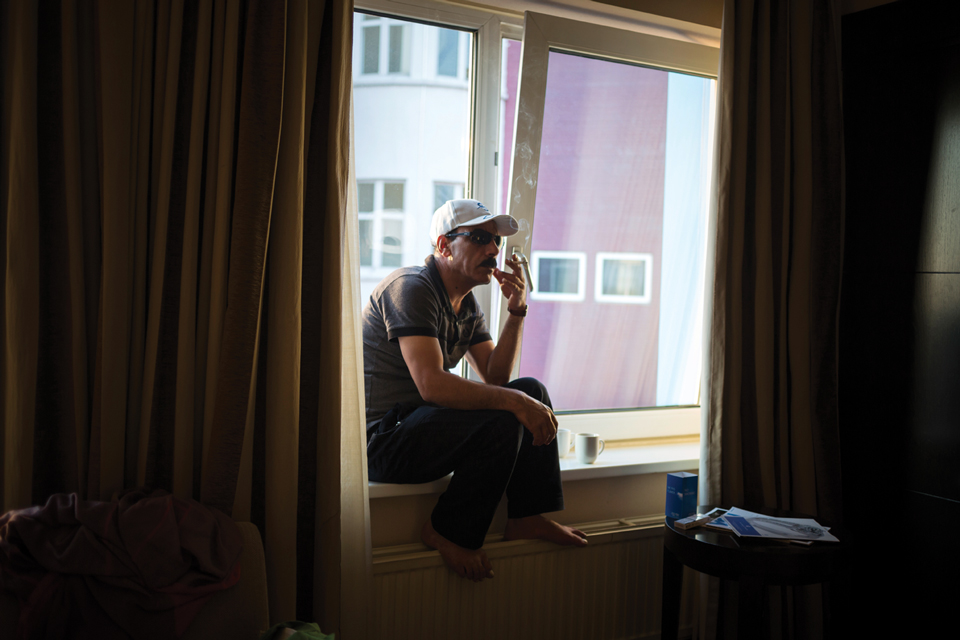 In Homs there were no cars, no people in the street—nothing but our car. When we entered, there was another checkpoint. We told the soldier there, “Brother, we need to take the road to Tadmur, then up to Jazeera.” He said, “Go straight.” We went straight. We passed two more checkpoints. At the second one, the soldier said, “Whoaaaa, where are you going?” We said, “We are going to Homs.” He said, “Stop! Give us your IDs, tickets.” We stopped. Every minute or minute-and-a-half, you heard the sound of a bomb exploding, or I don’t know what. The soldier ran off with our IDs to see if we were wanted or not. Five minutes later, he returned with our IDs and said, “Here you go. Go right and you will reach a checkpoint; they will show you the road.”

This was in the middle of Homs. The area we were in is called Bab Omar—it’s notorious for violence, and Mouawad Dahab, nearby, is full of problems, too. There was nobody in the street at all. We went along the road and saw an old man with another man sitting in the road in front of their house. I told the driver, “Let’s ask them. Maybe they can guide us so we don’t go the wrong way.” The old man said, “See this road? There’s a doctor’s office, and immediately after this office, you go left, right away. The first street, no, the second street, no, the third street—go left. Don’t dare go right. To the left!”

This street was wrong. We went left and the world was wrecked. This building was falling down, that building was on the ground. Some soldiers approached us saying, “Whoa! What are you doing here?” We said, “We lost our way. We don’t know where we are.” One of them took our IDs and went off, and the whole time you could hear the sound of machine gun fire. Another guy from the army said, “Just let them go.” He told us, “Turn around right away and go back.” The right turn had been the correct way. The old man had misled us, led us down the wrong road.

The gunfire was in full effect. We continued through more checkpoints. We got to a roundabout and the driver turned out to be very skilled. Right when we got onto the roundabout, we heard gunfire. The shooter aimed for the middle of the van, but we were going so fast that the bullets landed a few meters behind us. If he had aimed for the front of the van, it would have hit us. We heard tar and rubble explode behind us.


“The shooter aimed for the middle of the van, but we were going so fast that the bullets landed a few meters behind us.”

We increased our speed and got to another checkpoint. I had purchased food and sweets and pita, which were in the van. The soldier at the checkpoint asked what we had. He said, “Brother, we have to search your things properly.” I said, “Brother, I am Omar Souleyman.” He said, “Oh, Omar Souleyman? Then you can go, but I see that you have food with you.” I said, “Take all the food!” He took the sweets and the cigarettes and we drove. We drove and drove and drove. On the road, we were hearing rumors of thieves coming out and stealing your things. It’s your luck: either they kill you and steal from you or they rob you and say, “Go with god.” Even the car they will take from you, and you have to deal with it. I told the driver, “Let’s go with god. Go.”

We got to Tadmur, and there was nothing there. We met a man and slept at his house for two hours, until dawn. We continued on to Ar-Raqqah. Right before we got to Ar-Raqqah, we called some friends and they said, “Brother, the airplanes will hit you. Cars are getting hit on this road.” We got to Ar-Raqqah, and the road to the Turkish border was closed. What time was it? 6AM. Three more hours until the border. I had a problem: I had left Turkey without a passport, but I needed a stamped passport to get back in [Souleyman had sent his passport to Beirut via DHL]. There is no entry without it, you see?

Anyway, we went this way, that way, taking back roads. Before I got to the border I called the friend who was going to meet me and told him that I was close. I got to the border, I got the money, I found the man, I kissed the man! I went in to the customs building. They weren’t letting anyone through. It was 9AM, and they didn’t open the doors until 10AM. I knew someone from the army and told him, “Brother, I have someone on the other side who is sick. I need to get in.” At the Syrian border they are not as strict, but at the Turkish border they look you up. The soldier let me in, and I made my way to the Turkish border. If they found me without a stamped passport, they would arrest me. There was a big crowd of maybe 30 people at the border. I had gotten into Turkey, but thirty meters in front of me, they needed to see a stamped passport. There were people who had already been stamped trying to go from Turkey to Syria. I worked my way little by little through the crowd so the police wouldn’t see me. One official saw me and asked me what I was doing. I said, “I came in through the door. I just have to give something to someone and come right back.” I got to the door—I was either going to get grabbed or go through. I looked: there was not a single person there. Wooot! I went through!

My friend had brought a car and was waiting for me and calling to me on the other side but I ignored him until I had gotten away from the border. I got home at 10AM, with hours to spare before I had to be at the airport. First, I took a shower. I prayed. I made tea. I made breakfast. Thank god.