Loosely based on a tumultuous, 20-month period in the writer’s own career, Tao Lin’s 2013 novel, Taipei, unfolds in a disorienting delirium of drug use, romantic missed connections and meditations on the growing inseparability of life and the internet. As with much of the novelist’s work, it feels almost excruciatingly of-the-moment, dissecting the technology-addled, interpersonal awkwardness of the urban millennial set with dispassionate, scientific precision. For this issue’s Personal History, we asked him to leverage his powers of observation in service of a deeper trip down memory lane—specifically, a story from his suburban childhood. Tao Lin chose to write about his dogs. emilie friedlander

Tao Lin: When I was growing up, in a suburb near Orlando, Florida, my family had two toy poodles: Binky (male) and Tabby (female). We bought Binky first, when I was six or seven. We bought Tabby three or four years later. They had similar size skeletons, but Tabby, most of her life, was twice as heavy as Binky, who averaged around five pounds. We viewed them both as white, though at some point, to our amusement, veterinarians began to consistently label Tabby “apricot.” Binky cost around $250, Tabby around $400.

When we wanted to call both of them at once, we would say or shout, “Bin-Ta.” I think they were the only two toy poodles in our neighborhood, Willow Run, which had around 60 houses and a retention pond and maybe 15 houseless lots, which ranged from patchily weeded to moderately forested. Willow Run was contained by a wall that opened only at the front, where cars could enter or leave; there were two other neighborhoods on either side, although I don’t remember their names. I remember believing—with gradually increasing awareness that it seemed this way because of my perspective—that the other dogs in my neighborhood were “stupid.” I remember telling my mom this, and that, at least on one instance, she had agreed, saying in a mildly curious tone that it did seem that way.

Binky’s parents were thoroughbreds that, I think, regularly went to competition. I remember trying to pet Binky’s mother or father in a carpeted hallway as she or he, ignoring me, walked away with straight posture, seeming genuinely disinterested.

When we went to meet Tabby, to see if we liked her, I remember feeling distantly endeared by how her entire family—lying flat on their sides with eyes closed, on sofas and different areas of the floor—seemed to be sleeping. It was a hot, sunny afternoon. The scene, of maybe six toy poodles, reminded me of grazing cows—napping, though, instead of eating grass. 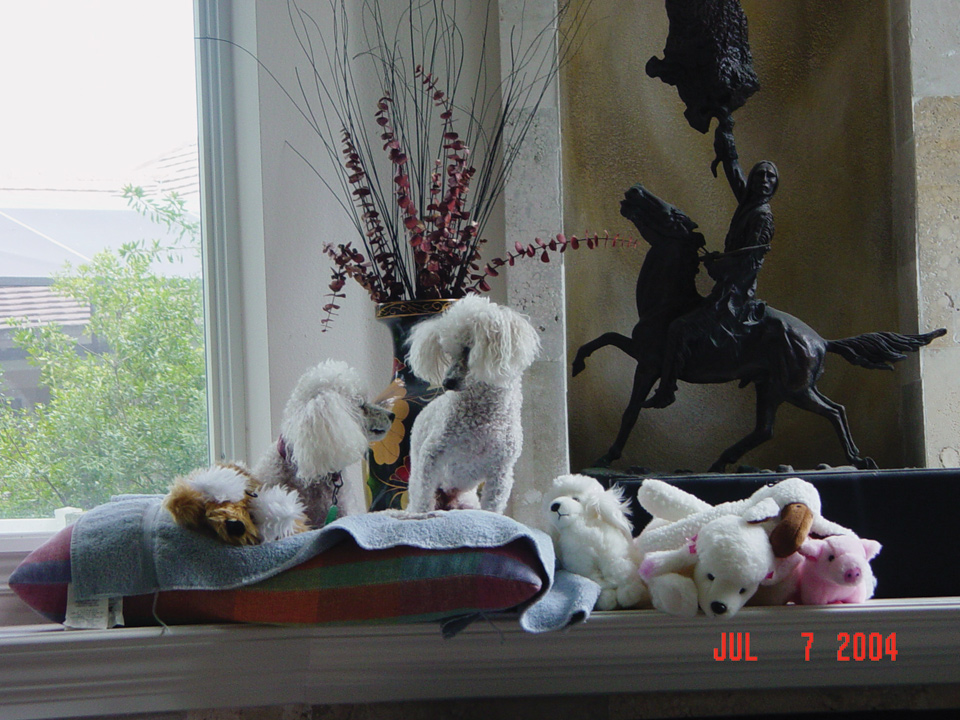 Tabby had long legs and a rectangular body. Because, relative to Binky, she weighed so much, her head seemed small. She looked deer-like. When she stood in place on four legs we could briefly place things on the top of her body, which was wide and flat, like a little, moveable counter. Tabby once fell off a table from a height of maybe six times her shoulder height, landing with her body on the hard linoleum floor, uninjured and unfazed. My mom sometimes said, “Tabby is funny, right?” to me with a serious expression. Tabby was “weird,” I’m now realizing. She would run away from us at any opportunity, without a specific destination. Once, running out of our house, Tabby seemed to disappear. We didn’t know where she’d gone until the next day, when a family, which had recently moved into our neighborhood, brought her home. Tabby had stayed the night at their house, after jumping into their minivan when it stopped on its way out of the neighborhood and opened its sliding door a few seconds to let in another (human) passenger.

Tabby sometimes would look at you by moving only her eyeballs, presumably to save the energy required to move her entire head. She responded to almost any name or noise. I’m not sure if she ever associated her name, more than she did any other human noise of similar tone and length, to her own existence. She allowed people to drag her conscious, uncontrolled body around the house, on carpet or tile or linoleum, by holding her two hind-legs (one with each hand) and slowly, with increasing speed, pulling her like a sled.

Binky, who was more “serious,” we felt, than Tabby, would never have let us drag him like a sled. It would have seemed, to him, absurdly inconsiderate, I think. Relative to Tabby, who with fondness we viewed as “stupid” and “unserious,” focused only on eating food, we viewed Binky as intelligent, sensitive, even sophisticated. I think I felt that Binky had a discerning, reserved sense of humor. His dominant trait was grumpiness (neighborhood kids called him “mean”) but he seemed grumpy, to me, in a reasonable, admirable manner. I liked and respected that Binky regularly, fiercely attacked people. If we were touching him in ways he didn’t like, or if we’d gotten too close to him while he was eating, or if he was curled on my bed and could feel my feet shifting beneath a blanket, disturbing him, he would growl as a warning, tensely holding himself very still. If we continued with what he didn’t like, he would leap, or lunge, at us with teeth bared, biting whatever was there—our clothing, usually.


“Binky, who was more ‘serious,’ we felt, than Tabby, would never have let us drag him like a sled. It would have seemed, to him, absurdly inconsiderate, I think. ”


I think Binky was able to abstract a map of the house. When he was chasing me, or when I was chasing him, in a circle—through the kitchen, living room, piano room, back into the kitchen—he would sometimes turn and run in the opposite direction, or stand motionless, anticipating my continuation, in the circle, back to his location.

Tabby believed that if she couldn’t see us, we couldn’t see her, I think. Sometimes, when she was carrying a grape or other piece of food, in her mouth, intending to hide it somewhere, I’d chase her and she’d run away and put her head beneath my parents’ bed and, with her entire body exposed, stop moving. Sometimes, after she’d have run away and been gone for up to four or five hours, she’d stand at the front door until my mom, dad, brother, or me happened to notice. I’d see her standing there—waiting in silence, aloof in an endearing way that, on some level, probably had seemed, to me, like patience—and let her inside. She rarely would scratch, or “knock,” the door.

Binky would scratch the door immediately and repeatedly, until we let him inside. If we didn’t hear him, he would go to the back of the house and scratch one of the two screen doors while sometimes barking, with a distribution and frequency of barks indicating the presence and development of both tiredness and frustration. I can’t think of anything Binky or Tabby did that doesn’t seem endearing to me today. Thinking about them makes me want to learn about more toy poodles. Tabby had diabetes the last year or two of her life. One day my mom, who was living in the house alone during this time, injected Tabby with the wrong amount of insulin and found her dead in her room. Tabby was around 12. Binky lived two or three more years, until he was 18, when he was euthanized, after being blind for around a year, then blind and deaf for around six months.

Sometimes, before he’d gone blind, I would lie on the carpet and look at Binky’s eyes, petting him in a subtly unpredictable manner (to prevent growling and/or biting). I’d experimentally say “I love you,” in a variety of otherwise never-used inflections, from TV or movies. I’d focus, while saying this increasingly louder and with more conviction and emotion, on trying to believe my words and on monitoring what I felt. I’d feel initially uncomfortable, and that it was difficult to say those words. I had to force myself, like I was jumping into a cold pool.

With each repetition I’d feel much less discomfort, and different in other ways. I never said it so many times that I felt no discomfort. But I could sense (and feel excited about, and afraid of) how other people who said “I love you” many times a day maybe felt normally.