From the magazine: ISSUE 88, October/November 2013

Peggy Noland is a Kansas City-bred designer whose aesthetic of paint, patches and patterns lies somewhere between Halloween costume, club kid clothes and punk pastiche. She got her start making technicolor body suits and campy leather jackets for pop weirdos like SSION and Hunx and His Punx, but lately, she’s been splitting her time between her hometown, where she’s got a shop filled with a bevvy of crazy clothes, and Los Angeles, where she’s been collaborating with Rihanna and Miley Cyrus on puffy-painted Air Jordans and NASCAR jackets. Her work is a beautiful mix of LA pop art and KC gutter-punk, best epitomized by the shirts she’s currently selling on Hunx’s Wacky Wacko online store, which look like a cross between truck stop tourist gear and Queen concert tees. We caught up with Noland during a four-hour layover in the Denver airport to talk about her hair, her home base and her plans to conquer Rodeo Drive.

You always change up the storefront for your Kansas City boutique—what’s the theme now? The storefront that I have up right now is my favorite. For seven years, I lived off of this street in Kansas City called Independence Avenue that’s very, very run down. And it is notorious for streetwalkers and drug dealing and there’s a lot of crime. Every storefront says they will cash your check, do your dry cleaning, take your EBT, there’s an ATM. Stores you can do everything in—that’s kind of the inspiration behind what’s at my store right now. There’s an “Everything Must Go” sign, there’s a BOGO sign, there’s an EBT sign, and instead of my name, Peggy Noland, at the top it says “huge sale.”

Do people actually go in expecting to get a check cashed? They totally do. I’m always afraid they’re going to be mad—I guess it’s false advertising, right? But once I tell them it’s an art installation and it’s a clothing store, they’re not mad—they’re amused.

What do people think of the clothes? A lot of my street-traffic customers feel sorry for me—that it’s like this glorified craft effort, like I’m a 12-year-old that never actually fathomed what the world was, still puffy-painting in her bedroom and thinking that she could make a living. And part of that is true! So I have to name drop and be like, Oh yeah, just ya know, puffy-painted shoes for Miley Cyrus, or, I got to do the third section of Rihanna’s tour. Give them some sort of context, like, I’m not actually crazy—I just appear crazy. 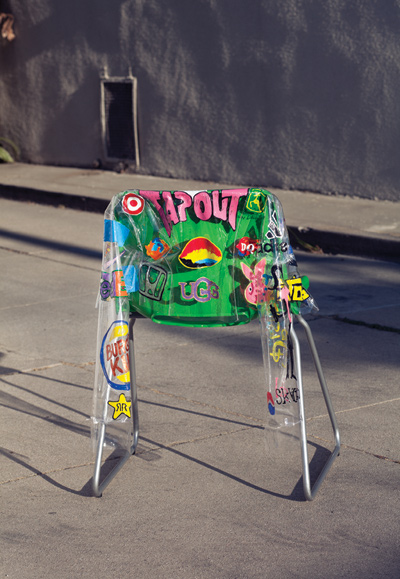 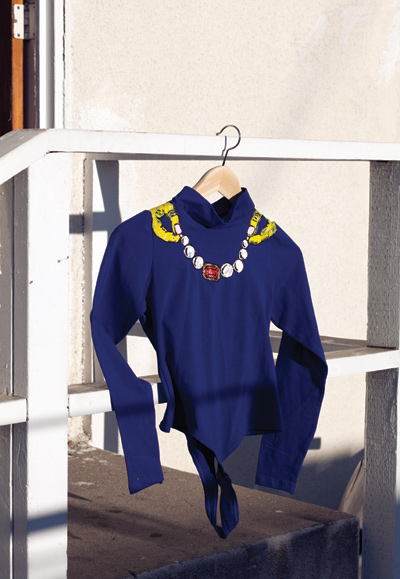 Did you make clothes when you were growing up in Missouri? I think every high school girl goes to a vintage store and buys something that’s too big for her and then baby pins it and says she made it. I remember doing that, but I never thought I’d be a fashion designer. In high school—oh my god—I cared so much! In fact, I strategically planned my high school photos. I wanted to wear Abercrombie, but I knew the Abercrombie logo had to be above the bust so you could still see it in the photos, and it would live on in eternity that I had on Abercrombie.

And you’ve loved branding ever since—a lot of your clothes are covered in corporate logos. We’re inundated with these logos and advertisements, and we can’t not be affected by it. I think that it is a way of turning it on its head, where I’m using these advertisements for my own personal gain. I am now benefitting from the Nike logo and the 5-hour Energy logo. I’m making money off it now. And I think that’s a little bit fucked, I think it’s a little bit punk, I think it’s messed up—I love being able to take these logos and make them my own. Those same ideas about what [branding] means about your identity, what it says about you—that’s my medium, fucking with that entire notion. The stuff that I’m making now, it’s more custom—when a customer buys something, I spend a lot of time talking about what exactly they want. I want them to be happy. If they’re like, ‘My mom and I go to CostCo every Saturday and I would love if you could splash a CostCo logo on,’ I’ll do it. If they have a favorite attachment to some corporation, I can definitely get it on there.


“I come from the heartland, and so I have those values. But I don’t let it appear that way from the outside.”

Is there something uniquely Kansas City about your aesthetic? I never had anything to do in Kansas City. There’s no happening nightlife. And we were so bored that we would sit around and try to make wild things to impress one another. That was such a good thing for me, because you didn’t go out every night—you created every night. And yes, you’re competing against a peer group with a very high skill set, but not, like, a million of them. So I think all these elements combined gave me a lot of opportunity to work hard and work fast, and for that boredom to serve my creativity.

Will you ever open store number two in LA? I don’t want a store anywhere else unless it’s on Rodeo Drive. I know how crazy and unreasonable that sounds. It’s a big entrance, but I just can’t get into any other place.

You’ve got a really unique personal look—does it get more attention in Kansas City than LA? Believe it or not it’s the opposite. I don’t know if they are used to seeing me in Kansas City or they just don’t give a shit, but people flip out in LA. Nobody cares in Kansas City.

What’s your hair like right now? It is still shaved in front, and I’m so embarrassed to say this—I don’t want to say I have dreadlocks right now, but they’re blonde, like tiny, tiny, little cyber-dreads, like “gamer girl.” At least, I hope they read “gamer girl” and not “Burning Man.” It’s a fine line.

How do you come up with your hairstyles? I want a hairstyle that nobody else has—I clearly like making things that people want to look at. For the most part, I’m a really wholesome person: my family’s really conservative, I come from the heartland, and so I have those values. But I don’t let it appear that way from the outside. Somebody told me once I was like goth Disney, because I have this crazy-ass look but my ideas and my morals are like Disney. I thought that was kind of a good way to put it.